Life History of the King Crow 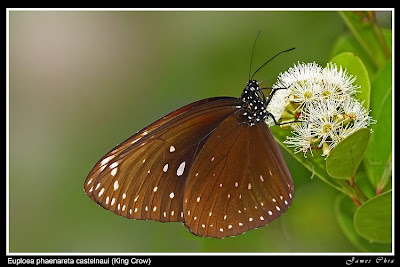 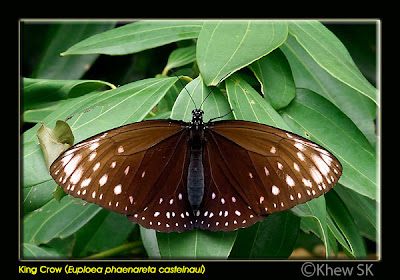 A King Crow showing us its upperside while resting on a leaf of the Wild Cinnamon on an urban hill park. 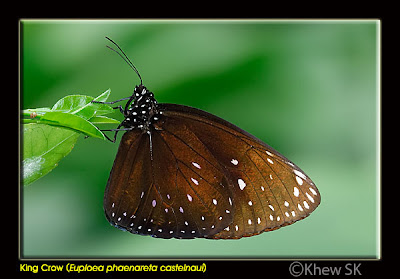 Another King Crow on a leaf perch, showing us its wing underside.

Physical Description of Adult Butterfly:
Euploea phaenareta is the largest species of its genus. As is typical of this genus, the termens are slightly crenulate. Above, the wings are dark brown. On the forewing, there is a series of discal spots, post-discal spots and submarginal spots, all whitish with a slight violet tinge. The discal and post-discal spots are larger in size towards the apex. There is also a small white spot in the forewing cell. On the hindwing, there is a whitish patch at the apex. Underneath, the wings are marked similarly as per the upperside though with variation in size of the white spots. The male has a large and raised scent patch in the hindwing cell. 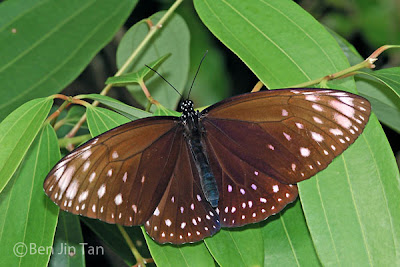 A King Crow on a leaf perch. 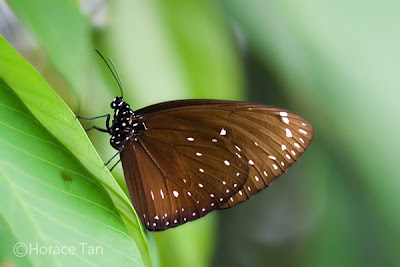 Another King Crow found in an urban park.

Field Observations of Butterfly Behaviour:
The King Crow is considered rare in Malaysia (C&P4) but in Singapore, it is not uncommon especially at sites where its host plant, the Pong Pong Tree, is found growing naturally (such as in mangrove areas and parts of the nature reserves) or cultivated in abundance. In the recent past, the host plant was commonly planted as a roadside tree and as a result, King Crow was brought into urban areas and parks. However this practice has changed over time, and nowadays, the cultivation of the plant is confined to various urban parks. This change has an effect of restricting the appearance of King Crow to such sites. Sightings of the slow flying adults includes individuals or small groups visiting flowering trees and puddling on wet ground. 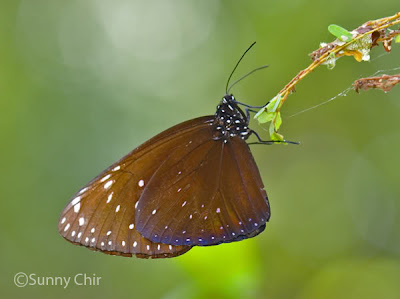 A King Crow balancing itself on a tiny perch. 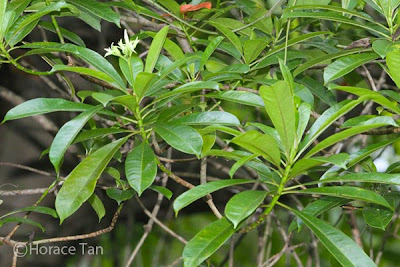 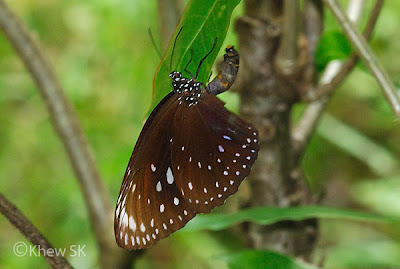 The eggs of the King Crow are laid singly on the underside of a leaf (typically young leaf) of the host plant. The creamy yellow eggs are tall (about 1.6mm in height) and somewhat cylindrical (diameter: 1.2mm) with a rounded top. The egg surface is ribbed. 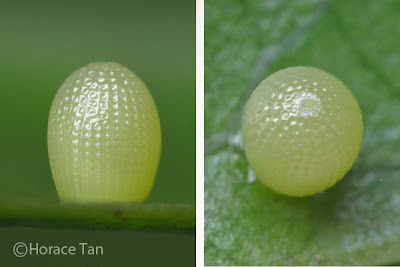 Two views of an egg of the King Crow. 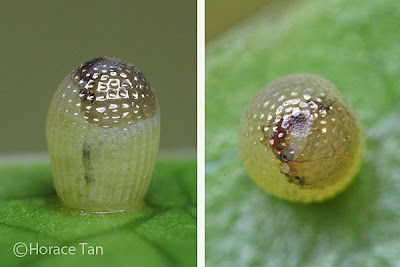 Two views of a mature egg of the King Crow.

The egg takes about 3.5 days to hatch. The young caterpillar emerges by eating away part of the egg shell. The rest of the egg shell becomes the first meal for the newly hatched, which has a length of about 3mm. Its cylindrical body is pale yellowish. The large head capsule is black in color. A pair of very short and inconspicuous protuberances can be found on the dorsum of each of the following three segments: 2nd and 3rd thoracic segments, and the 8th abdominal segment. 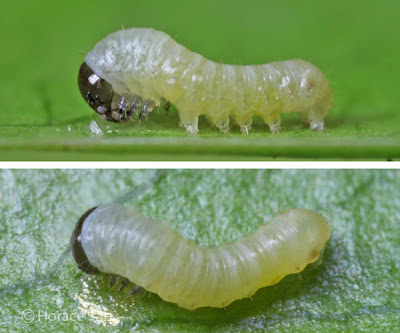 Two views of a newly hatched caterpillar eating the last of the egg shell, length: 3mm.

Once the newly hatched moves on to feed on the leaf lamina, its body starts to take on a green undertone. The growth is rather rapid with the body length doubled to 6mm in about 1.5-2 days. Towards the final half day of the 1st instar, the body takes on yellowish brown ring markings on all segments with the exception of the prothoracic segment. Laterally, the body also assumes a yellowish tinge above and below the spiracles. 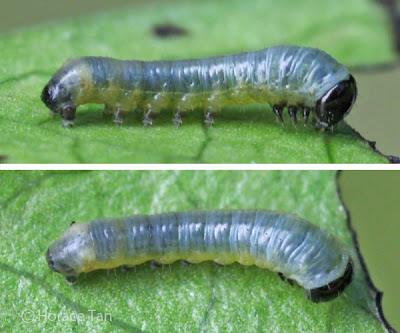 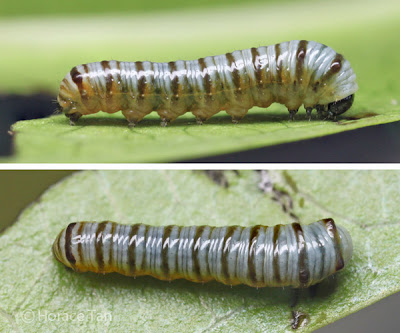 Two views of a 1st instar caterpillar, late in this stage, length: 6mm.

The body of the 2nd instar caterpillar has a white ground color. There are black rings on each of the body segments except for the very 1st segment. The most obvious change is the lengthening of the 6 tiny protuberances seen in the 1st instar to short processes, each of which is almost entirely black. There are two small black spots on the dorsum of the prothorax, and one large black patch (anal plate) on the posterior end of the body. The body is also colored yellowish to orangy in the super- and sub-spiracular areas. This instar lasts only 1.5-2 days with the body length reaching 12.5mm before the moult to the 3rd instar. 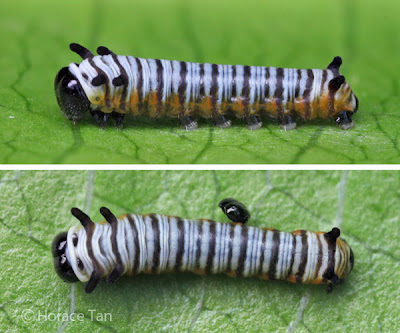 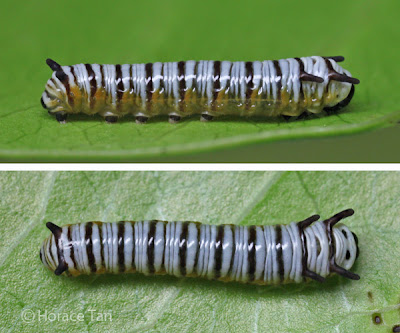 The 3rd instar caterpillar is similar in appearance to the 2nd instar caterpillar with the only obvious change being the proportionally longer processes. The 6 processes are still mostly black in color with a touch of grey towards the base. When at rest, the 6 thoracic processes are typically kept at a forward pointing horizontal position. This instar takes about 1.5-2.5 days to complete with body length reaching up to 20mm. 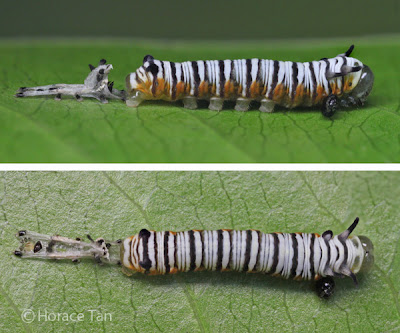 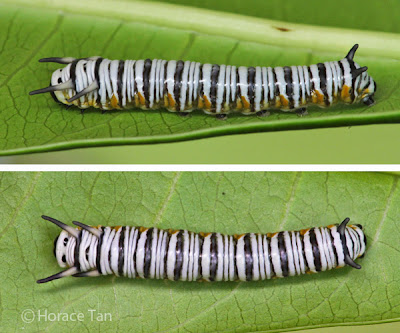 Two views of a 3rd instar caterpillar, late in this stage, length: 20mm.

The 4th instar caterpillar has proportionally longer processes. The lower half and the tip of each process are colored in white. On the body segments, the dark rings from the previous instar are replaced with grey-colored rings outlined in dashes of black. The black head capsule now has two frontal, prominent but disjoint white stripes and two shorter lateral white stripes. This instar lasts 2 to 2.5 days with the body length reaching about 30mm. In the half day leading to the moult, the body of the 4th instar caterpillar discolorizes dramatically to almost a complete snow-white. 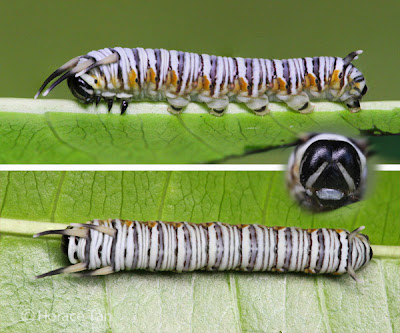 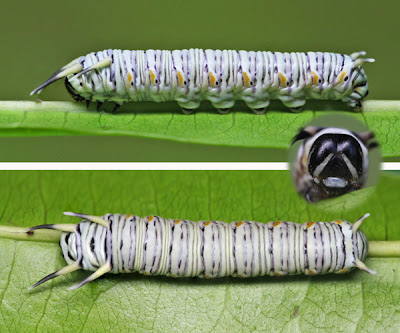 Two views of a 4th instar caterpillar, late in this stage, length: 30mm.

The 5th instar caterpillar initially resembles a decolorized version of the 4th instar caterpillar. The frontal and lateral white stripes on the black head capsules are now more prominent and joined together. But within hours, the white base colour is replaced by a dark shade of purplish brown. The proportionately longer processes are still white tipped but the basal portion are now colored purplish brown. The spiracles have also become more prominently marked in black spots. 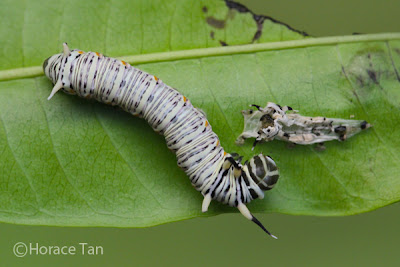 A newly moulted 5th instar caterpillar, with its exuvia lying near by. 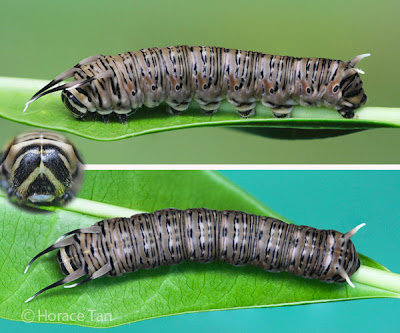 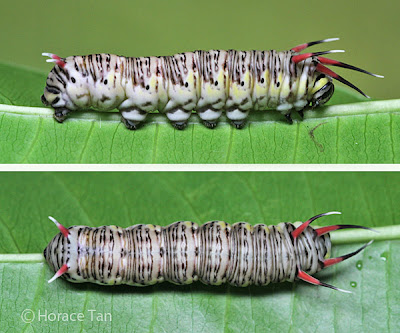 Two views of a 5th instar caterpillar, late in this stage, length: 43mm.

The 5th instar lasts for 3.5-4 days, and the body length reaches up to 53mm. On the last day, the caterpillar ceases feeding, and its body becomes shortened and decolorised somewhat with the sub- and super-spiracular area turned yellowish. The basal portion of the six processes turn bright reddish. For pupation site, the caterpillar typically chooses a spot on the mid-rib of a leaf underside. At this site, the caterpillar spins a silk pad from which it then hangs vertically to take on the pre-pupatory pose. At this point the body color decolorises further to a greyish white color. 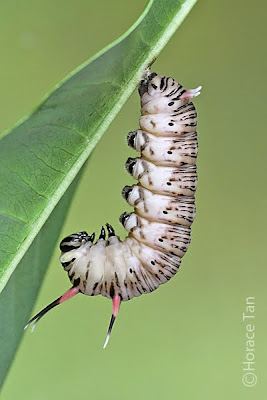 A pre-pupatory larva of the King Crow.
The pupation event of a King Crow caterpillar.
Pupation takes place 0.5 days after the caterpillar assumes the hanging posture. The pupa of the King Crow suspends itself from the silk pad with no supporting silk girdle. Initially, the pupa is in a light shade of yellowish brown, but the surface gradually takes on a silvery metalic glitter about a day later. The pupa is rather rotund, and has a few black spots and dark brown patches on the dorsum. Length of pupae: 26mm. 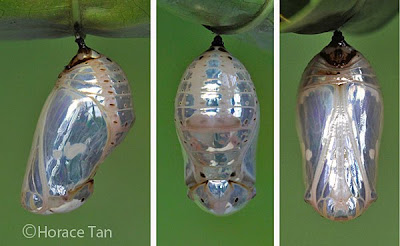 Three views of a shining pupa of the King Crow, day 2 after pupation. 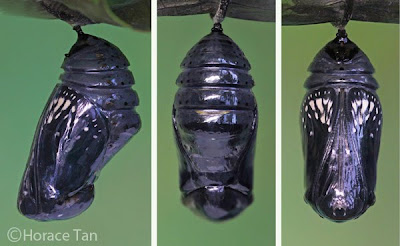 Three views of a mature pupa of the King Crow, minutes prior to eclosion.

After about 8 days of development, the pupal turns black as the development within the pupal case comes to an end. The white spots on the forewing upperside also become discernible. The following day, the adult butterfly emerges from the pupal case. It then perches nearby to expand and dry its wings before taking its first flight. 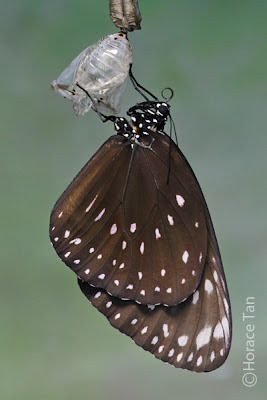 A newly eclosed King Crow drying its wings on its pupal case.