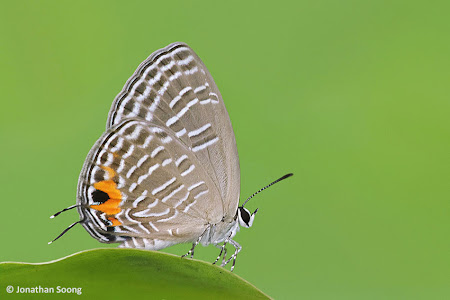 This Lycaenid was re-discovered by ButterflyCircle members in 2008 when a colony of the species was found at the now-gone Mandai Orchid Garden. As the caterpillar of this species feeds on the flower of the Torch Ginger, several other colonies of the Metallic Caerulean have been found since. A translocation attempt at the Zoo was also successful, and the species can also be found at the Zoo today.


Males have a black diffuse border on the forewing above whilst the females have the forewing border extending narrowly along the costa to the base. The upperside is a bright metallic light blue. The species has many lookalikes in the genus. This Metallic Caerulean was photographed by young ButterflyCircle member Jonathan Soong.
Posted by Commander at 8:00 AM 1 comments