Butterfly of the Month - February 2009

Butterfly of the Month - February 2009
The Commander (Moduza procris milonia) 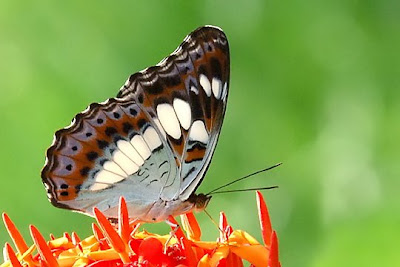 For the month of February 2009, which also happens to be the month of the year on which my birthday falls, we feature a species which I had used as my avatar and nickname/alter ego in ButterflyCircle - The Commander. I'd chosen this butterfly as my nickname as I had fond memories of chasing this strange-looking and new butterfly that I'd never seen before when I was a school-going kid in Malaysia. I still remember vividly the encounter at the forested area of Gasing Hill in Petaling Jaya. The Commander had flown and landed on the surface of a leaf in front of the forest path where I was walking, and for a moment, both of us froze. As I admired the colour and pattern of the wings, I took a step closer and the movement startled the skittish butterfly and it took off at turbo speed to the treetops, ending the short encounter, but the image of this beautiful butterfly was imprinted in my mind. 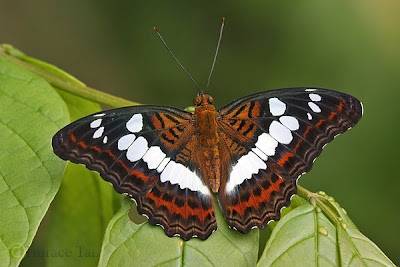 It was only after the outing when I came back home to check on my reference books, that I knew what I had seen. It was some years later before I encountered this elusive beauty again. 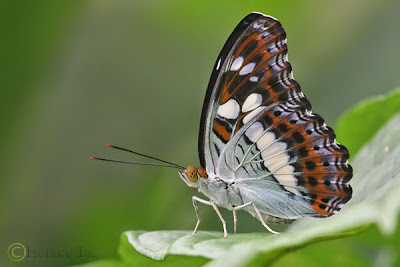 The Commander (Moduza procris milonia) is the sole representative of the genus in Malaysia and Singapore. It is related to the "Admiral" species under the genus Limenitis in the temperate regions. Indeed, the species, together with a number of other closely related genera, has been re-classified under the sub-family Limenitidinae. 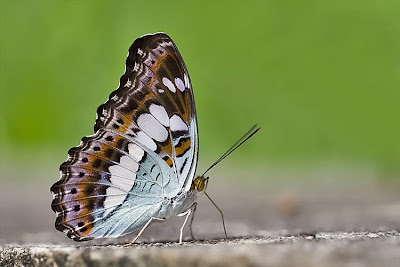 The Commander is dark reddish brown on the upperside with the wings traversed by a broad white macular band extending to both the fore and hindwings. There are four white subapical spots on the forewings. The wing borders are strongly crenulated. Each hindwing has two series of black submarginal and postdiscal spots. The underside is marked as above, but the basal halves of the wings are pale greenish grey in contrast to the orangy brown on the upperside. Males and females are similar in appearance. 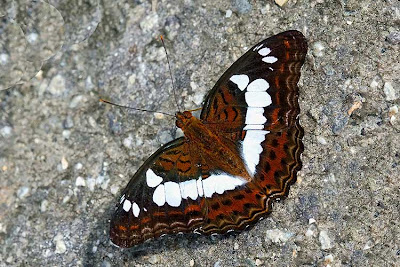 In Singapore, the species is often observed singly, flying rapidly and stopping to sunbathe with its wings open flat on the upper surfaces of leaves. It has a strong and determined flight, is skittish, and takes off to the treetops if it senses any danger. Females are occasionally seen in the vicinity of its preferred host plant, Timonius wallichiana, as she tries to oviposit. The early stages of the Commander has been recorded by Horace Tan, and is found on this blog here. 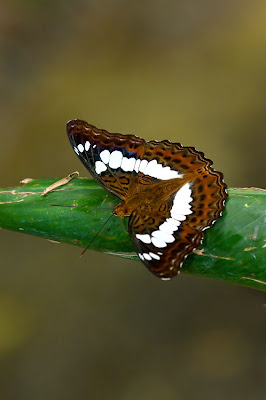 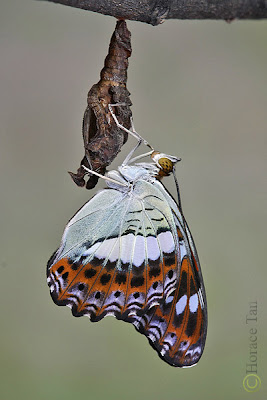 Occasionally, a cooperative individual is encountered, either puddling at roadside seepages, or when it decides to forage for food amongst fallen leaves or amongst low shrubbery. However, it is always on the move, and photographing this species is not the easiest as far as butterfly photography is concerned. It is partial to human perspiration, and depending on whether the butterfly is hungry or not, a lucky individual may be entertained with a friendly close-encounter with a Commander, when it decides to feed. 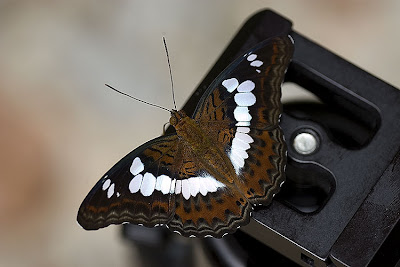 A hungry Commander feeds on my sweaty tripod ballhead

The Commander is moderately common, and frequents the forested areas of the nature reserves as well as public parks and gardens. 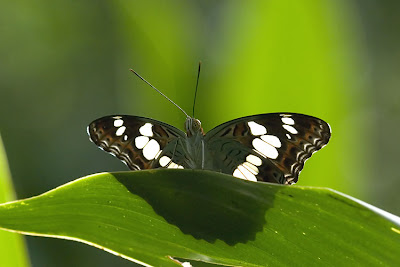 Posted by Commander at 8:58 PM 2 comments