ButterflyCircle member Goh LC from Kuala Lumpur was fortunate enough to record the early stages of the Yellow Glassy Tiger. Below are his photos and observations of the life history of this pretty Danainae butterfly.

Physical Description of Adult Butterfly :
The ground color of the wings is predominantly bluish grey, with the usual black markings of the Parantica species. Each wing has a bright yellow basal patch, that on the hindwing covering about half of the wing surface. Field Observations of Butterfly Behaviour : This butterfly is not uncommon, and frequents forested areas rather than open country. It flies slowly and often glides in mid air. While at rest, it hangs upside down on the dried branches usually with their wings folded shut.

Special Points of Interest :
This species demonstrates both Batesian* and Mullerian** mimicry. The female Wanderer (Pareronia valeria lutescens) mimics the Yellow Glassy Tiger for protection from predators. When the female Wanderer is foraging for food, or looking for a host plant to oviposit, it flies and behaves like the Yellow Glassy Tiger. But when alarmed the Wanderer takes off in a very capable fashion. This is an example of Batesian* mimicry.

In an example of Mullerian** mimicry, the male of day flying moth, Cyclosia pieridoides shares a similar appearance to the Yellow Glassy Tiger when in flight. Interestingly, the female of this species of moth mimics the Smaller Wood Nymph (Ideopsis gaura perakana), another distasteful Danainae. Both the Yellow Glassy Tiger and the Smaller Wood Nymph were recorded in Singapore by the early authors, but these species do not appear to exist on the island, as they have not been observed for the past two decades or so.

* Batesian mimicry : In this type of mimicry, the mimic not only looks like the model, but also behaves like it. This disguise increases the chances of the mimic being mistaken for the distasteful model which then gives it some “immunity” as it is avoided by its predators.

** Mullerian mimicry : A strategy that has evolved among butterflies (and moths) is for all members of a group to resemble each other and also be unpalatable. This approach spreads the chances of any one butterfly (or moth) being eaten over a larger number of species, and over a larger number individuals within a species. When a bird catches any one of these individuals, it quickly learns to keep away from all the species within the group. This type of mimicry is referred to as Mullerian mimicry, after Muller who first described it.

Early Stages :
The female oviposits a single spindle-shaped egg, usually on the underside of a leaf of the host plant. The egg is white in color, measuring 1 x 2mm high. After about 4 days, the caterpillar hatches from the egg, and immediately starts to consume the eggshell completely. The caterpillar then starts to eat the leaf that the egg was laid upon. The 1st instar caterpillar has a smooth round black head. The color of its body is yellowish-green. There are 2 reddish knots in the prothorax near the head and 2 slightly smaller reddish knots in the last abdominal segment. These knots will eventually evolve into the long filamentous processes known as tubercles. 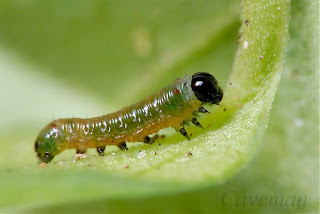 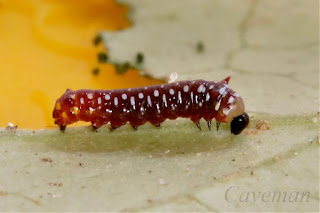 In the 3rd instar, the red colour of its body has become richer, the white and yellow spots are more striking. The knots have turned into paired tubercles. The front tubercles are white with reddish bases and tips. 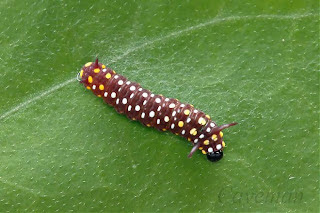 The 4th instar caterpillar is essentially similarly patterned as the 3rd instar, except it has grown bigger. White spots appear on its black head. The round spots lining its body from thorax to last abdominal segment have turned yellow. 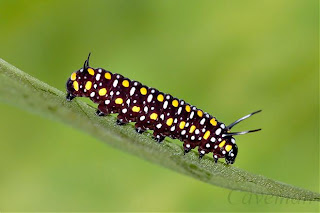 4th instar caterpillar with white spots on its head (24mm)

The final instar caterpillar is similar to 4th instar caterpillar, except the colours are more defined and the tubercles are longer. The red colour of its body has turned darker. It is a neat eater as it finishes one leaf completely before starting on a new leaf. 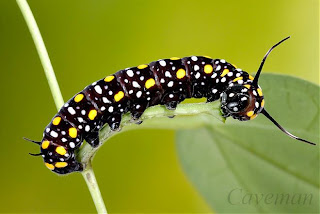 After a total of 14 days upon hatching from the egg, the caterpillar then goes into half a day of dormant pre-pupation pose. The caterpillar prepares for pupation by curling itself into a ball, and anchoring itself by its cremaster to a variety of perches including the leaves or stems of the host plant. 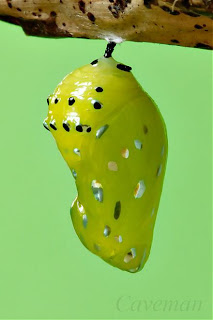 The pupa is light green with black spots on the abdominal segment of the pupa after 1 day. The silver spots will then appear on the wing and head segments of the pupa after 2 days. After about 8 days, the pupa shell turns transparent and the wings of the butterfly can be seen through the pupa shell. Upon eclosion, the adult butterfly emerges and hangs its wings out to dry, as it pumps fluids into the wings to expand them. When its wings are sufficiently hardened, it opens and closes them as if to test them for flight.