Life History of the Common Imperial 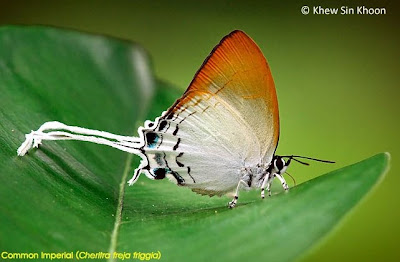 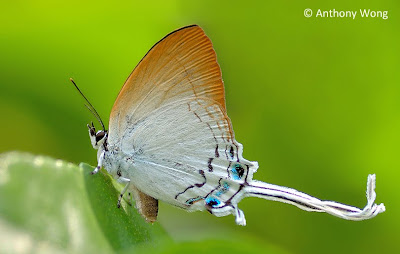 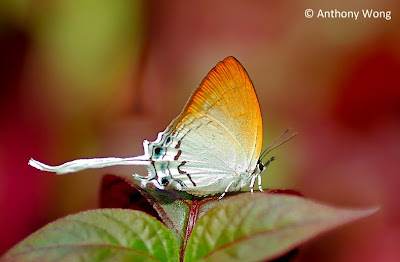 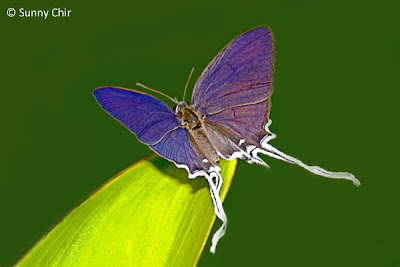 Above, the male is purplish brown and the female is dark brown. Both sexes have large quadrate tornal spots in spaces 1b and 2 of the hindwing. These spots are outlined in white, more broadly so in the female than in the male. Underneath, both sexes are mostly white and have orange brown shadings on nearly the entire forewing and just the apical area of the hindwing. There is a narrow, indistinct ochreous brown post-discal line on the forewing. On the hindwing, the post-discal line occurs in short stripes and becomes darker and bolder towards the lower half of the wing. In addition, there is an interrupted dark submarginal line, a series of tornal spots on the tornal lobe and spaces 1b, 2 and 3. Metallic bluish green scalings overlay these spots. A long filamentous tail, up to 25mm, occurs at the end of vein 2. In contrast, a much shorter tail occurs at the end of vein 1b. 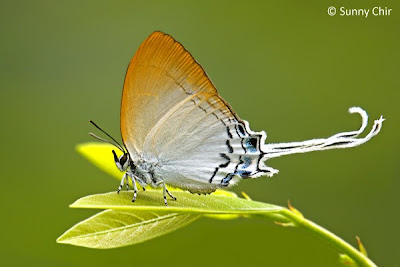 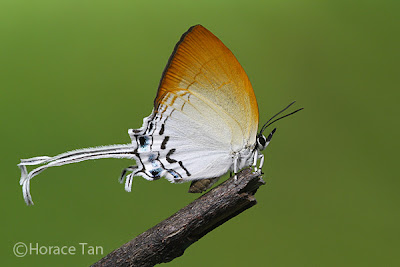 The Common Imperial is moderately rare in Singapore. The adults are more commonly sighted in the Southern Ridges, in addition to sporadic sightings in the nature reserves and other urban parks and gardens. It frequents forested areas and flies in a similar manner as its more common relative, the Branded Imperial. As the adult butterfly flies from one perch to the next, the long tails trails elegantly behind the butterfly. 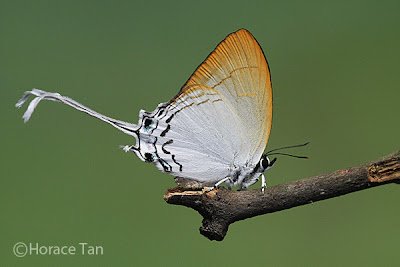 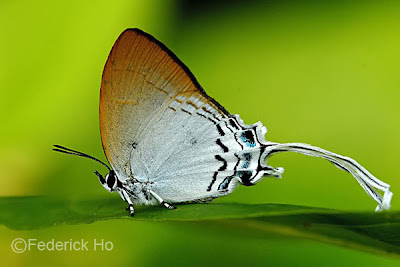 The immature stages of Common Imperial are polyphagous. To date 4 plants have been recorded as its local hosts. Caterpillars of all instars feed on young and tender leaves of the host plants. They are also polychromatic, occurring mainly in either a green form or a pink form. 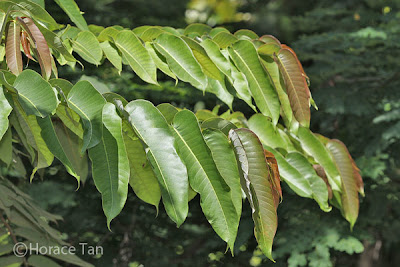 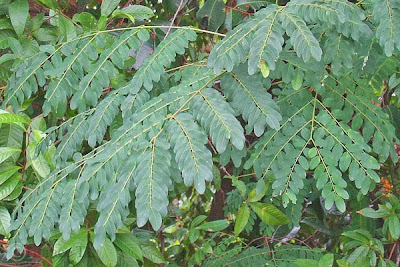 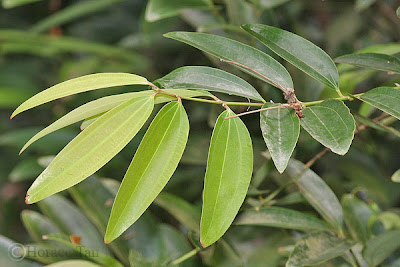 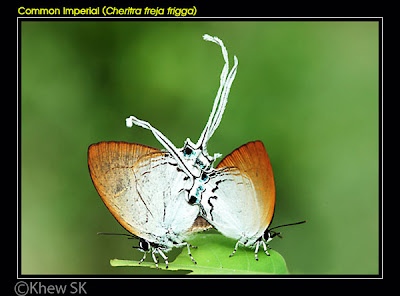 A mating pair of the Common Imperial. 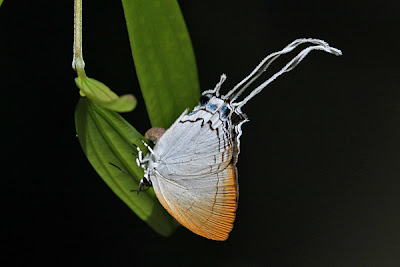 A mother Common Imperial laying an egg on a young leaf of the Wild Cinnamon.

Eggs are laid on the underside of a young leaf or other parts of a young shoot of the host plant. The white egg, about 0.9mm in diameter, is shaped like a slightly flattened chinese bun. The surface is covered with numerous pits of varying sizes. The polar pit holds the depressed micropylar. 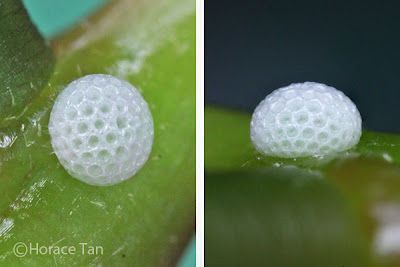 Two views of an egg of the Common Imperial. Diameter: 0.9mm.

A Common Imperial caterpillar emerges from its egg shell. 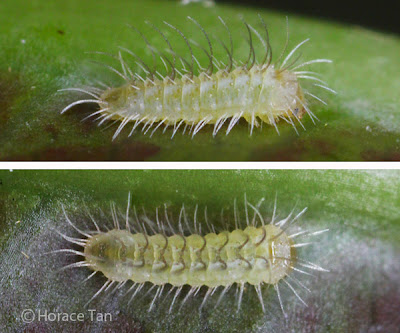 Two views of a newly hatched caterpillar of the Common Imperial, length: 1.2mm

As the caterpillar grows, raised tubercles become apparent on the dorsum, one pair to each of 2nd-3rd thoracic segments, and one to each 1st-7th abdominal segments. Body color is whitish alongside this row of tubercles, forming two white bands visually. Another two yellowish green bands line the outer sides of these white bands. This instar lasts for 2.5 to 3 days with the body length reaching up to 2.7mm. 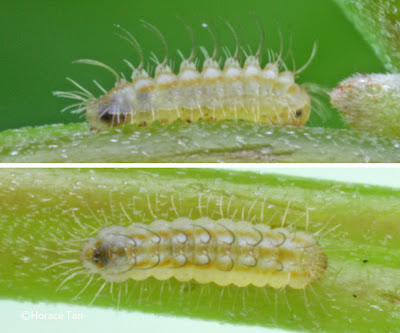 
Covered with numerous short setae, the body of the 2nd instar caterpillar is either whitish with a yellowish green tone or pinky tone. Each of the 2nd and 3rd thoracic segments has a pair of dorso-lateral conical projections, whilst each of the first six abdominal segments have a tall conical projections, taller than those on the thoracic segments. These projections are yellowish brown around the tip and whitish at the base. The 7th abdominal segment is broadened laterally compared to the other segments. In addition to the dorso-lateral white bands, a lateral white band also become discernible along the rim of the body. The growth in this stage brings the caterpillar to a length of about 5mm, and after about 2 days in this stage, it moults again. 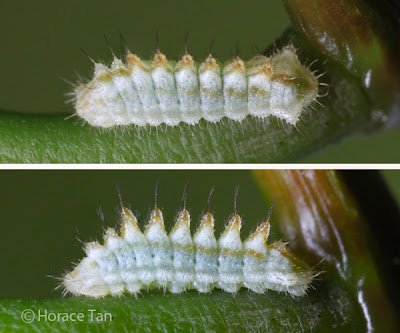 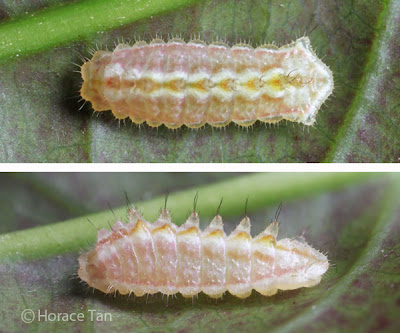 Two views of a 2nd instar caterpillar, late in this stage, length: 4.9mm. 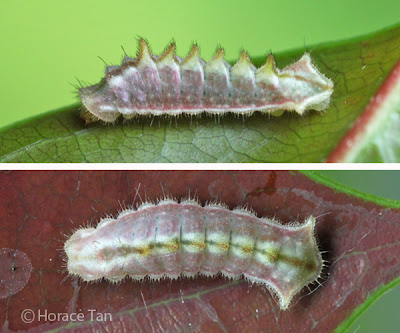 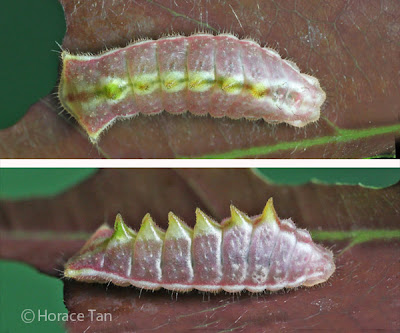 Two views of a 3rd instar caterpillar, late in this stage, length: 10.5mm.


The 4th instar caterpillar bears a few changes from the 3rd instar. One visual difference is the missing white bands flanking the dorsal projections on the abdominal segment. The body base color is either green (green form) or pink (pink form). The dorso-lateral pairs of projections seen on the 2nd-3rd thoracic segments in earlier instars are no longer discernible. Furthermore, yellowish brown to dark brown patches occur laterally in 3rd-5th abdominal segments, increasing in size from the 3rd to the 5th segment. This instar lasts about 3-4 days with length reaching 20-22mm. 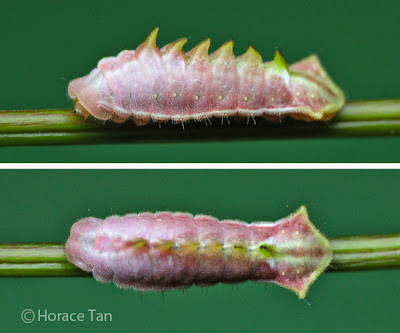 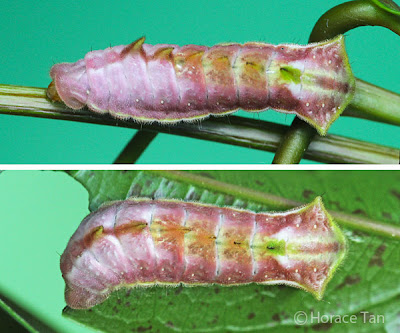 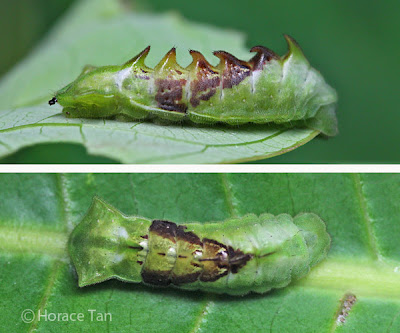 Two views of a 4th instar caterpillar, green form, late in this stage.


Towards the end of the 4th instar, the caterpillar ceases eating and chooses a spot on an inclined leaf surface or a stem for its pupation site. At this time, the caterpillar's body shrinks in length and its body changes to a shade of green color (even for the pink form). The lateral patches surrounding the dorsal projections also decolorise drastically. It spins a silk pad and then anchors itself on it in a head-down posture. 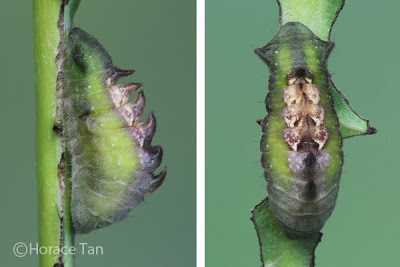 Two views of a pre-pupatory larva of the Common Imperial.


Pupation takes place after one day of the pre-pupal stage. The pupa has the typical lycaenid shape, yellowish green in base colour with pale yellowish brown markings on the first 6 abdominal segments. The wing case and the dorsum of the thorax is greyish brown to greenish brown. Length of the pupa: 10-12mm. 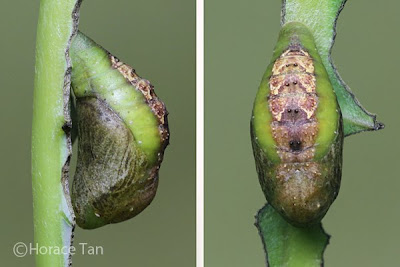 Two views of a pupa of the Common Imperial.


5.5-6 days later, the mature pupa turns dark in the dorsal and wing case areas, and yellowish brown elsewhere. The next day the adult butterfly emerges from the pupa. 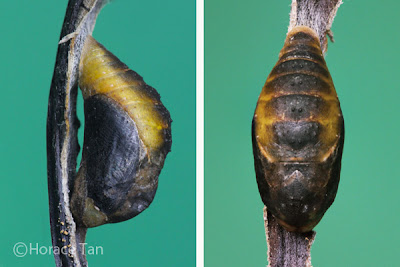 Two views of a mature pupa of the Common Imperial. 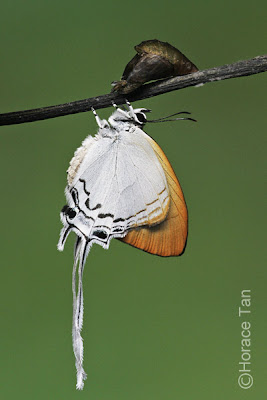 A newly eclosed Common Imperial resting near its pupal case.