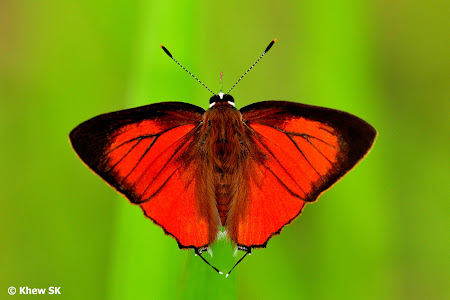 Our little red dot celebrated its 54th Birthday on 9 Aug 2019. This marks 54 years after separation from Malaysia back in 1965, where Singapore became an independent nation. This year, the theme “Our Singapore” commemorates Singapore's bicentennial and allows us to tell Our Singapore story from past to present. 1819 was one of the key turning points that set Singapore on a new trajectory. It was the year that Sir Stamford Raffles, along with William Farquhar, arrived in Singapore. The Singapore Bicentennial in 2019 marks the 200th anniversary of the British arrival in Singapore. 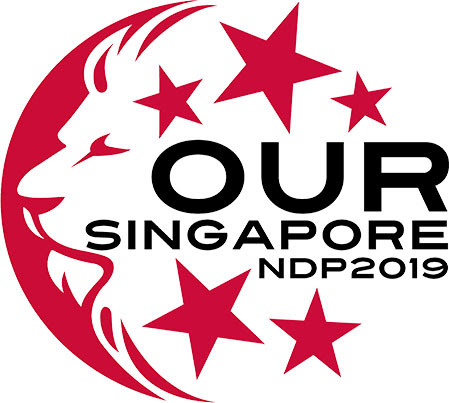 In a volatile and troubled world - from global trade wars to climate change, a small island-state like Singapore is subject to all manner of uncertainties and turbulence in international affairs. This year's National Day Theme, "Our Singapore" focuses on galvanising the population to face the challenges ahead. “Our” emphasises the collective ownership of Singapore. The residents are now living the dreams of our pioneers, and we ourselves are now the pioneers of our future. 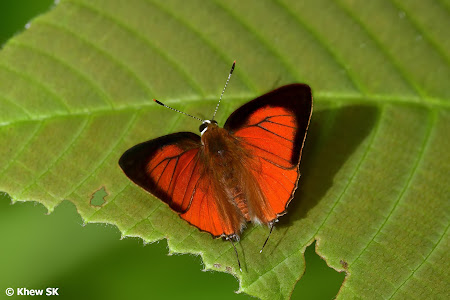 The Merdeka generation, those born between 1 Jan 1950 and 31 Dec 1959, is also featured prominently this year's National Day Celebrations. "The Merdeka Generation grew up with Singapore, worked hard, and laid the groundwork for generations to come. Because of their sacrifices, Singapore stands tall and proud today."

For this long weekend's blogpost, we feature the red and white butterflies of Singapore in celebration of our National Day, and showcase the colours of our national flag. The colour red symbolises "universal brotherhood and equality of man", and white, "pervading and everlasting purity and virtue". 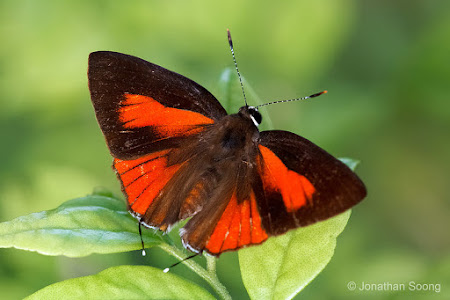 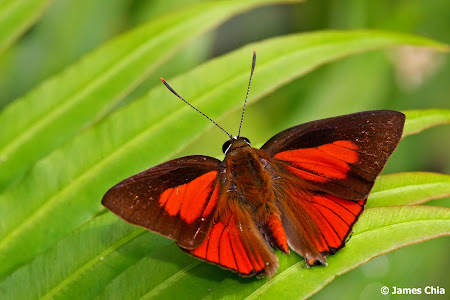 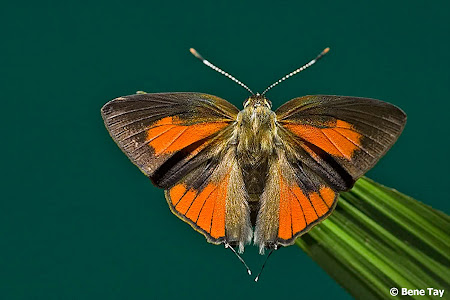 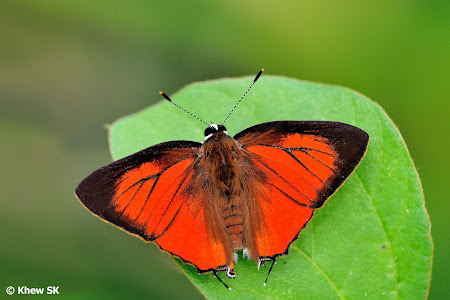 The bright red upperwings of Singapore's Flashes and Cornelians

Amongst the red coloured butterflies found in Singapore, the most striking are from the genus Rapala and Deudorix. Both these genera feature small butterflies in which the upper surfaces of their wings, in particular the males, are predominantly red. A typical behaviour of the males of these species is sunbathing with their wings opened to show their red uppersides during certain hours of the late afternoon. Amongst those that feature red uppersides are the Common Red Flash, Scarlet Flash, Cornelian and Eliot's Cornelian. 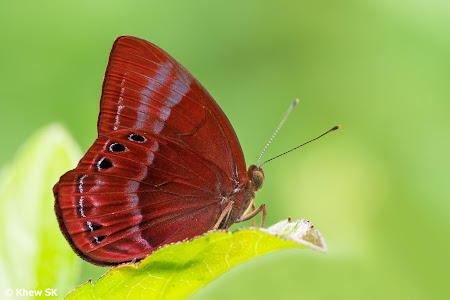 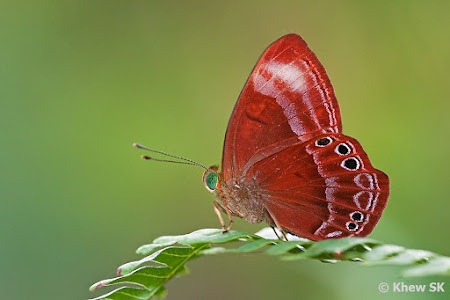 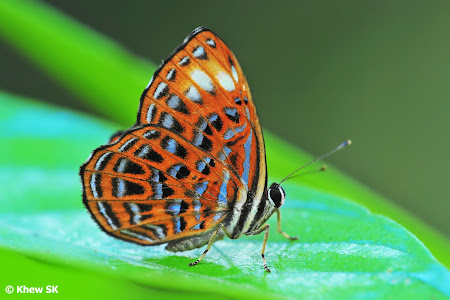 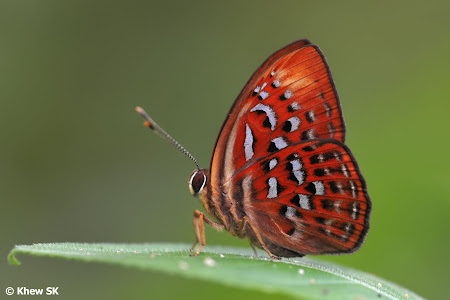 The species of "metalmarks" from the family Riodinidae are also largely red butterflies, albeit mostly coloured a deep red or maroon. A few species have a base colour of reddish brown but adorned with silver-grey or silver-blue spots. Examples of these red butterflies are the Malayan Plum Judy, Spotted Judy, Harlequin and Lesser Harlequin. 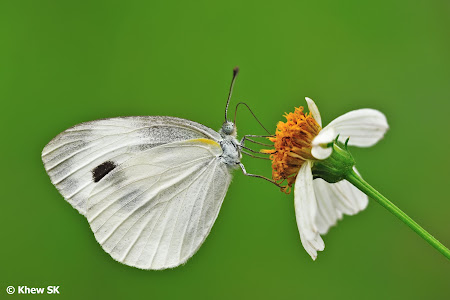 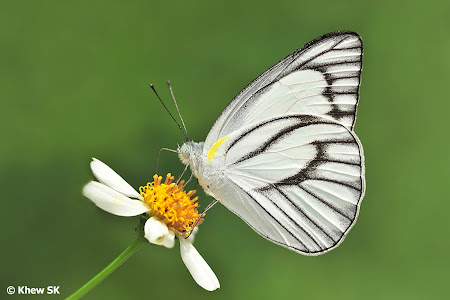 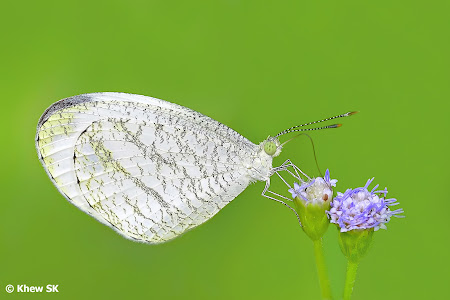 Some of our white butterflies from the family Pieridae 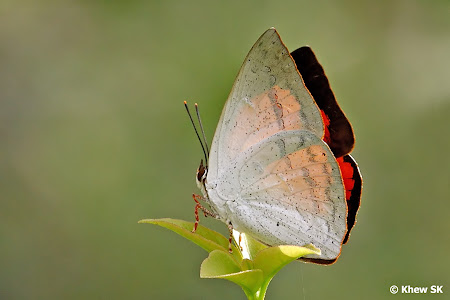 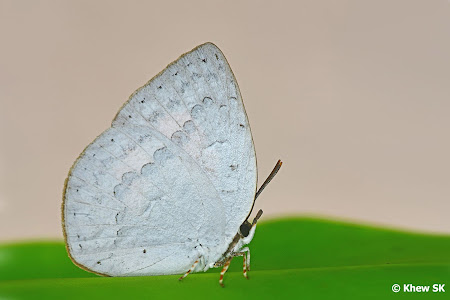 White is also the colour of many of the Lycaenidae butterflies, especially on the undersides of several species amongst the Curetinae, Polyommatinae and Theclinae subfamilies. Both the extant species of the Sunbeams feature silvery-white undersides with light markings. The uppersides are a orangey-red. 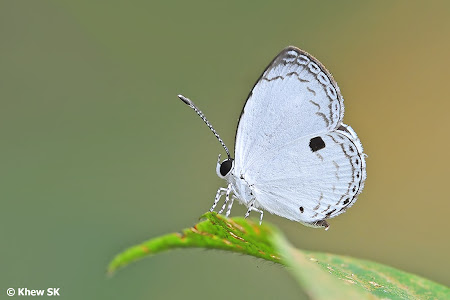 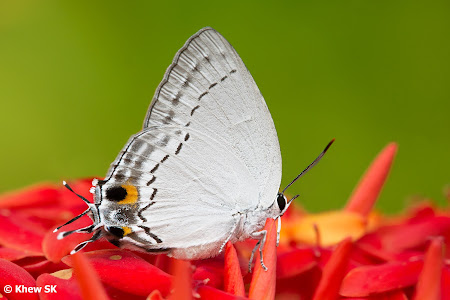 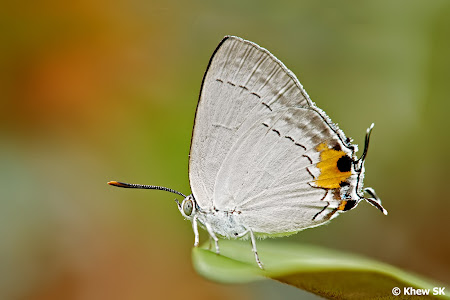 Amongst the tiny Polyommatinae are species like the Quaker, which is has a clean white underside but with some black spots. The Theclinae subfamily also features a couple of butterflies that appear white to the eye. Examples are the Peacock Royal and the White Royal, with greyish-white clean undersides with light streaks and markings. 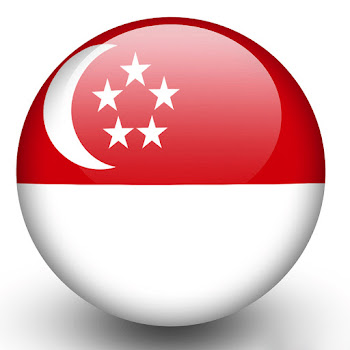 On behalf of ButterflyCircle members, we would like to take this opportunity to wish all our Singaporean readers a Happy 54th Birthday to Singapore. Majulah Singapura!