Life History of the Common Posy 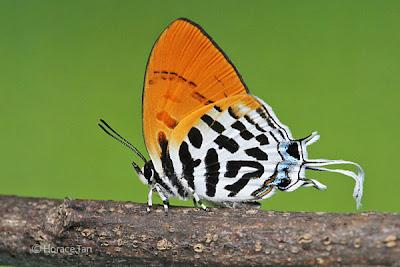 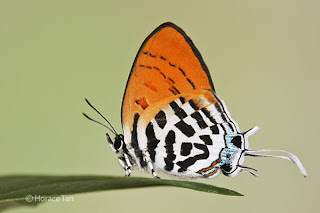 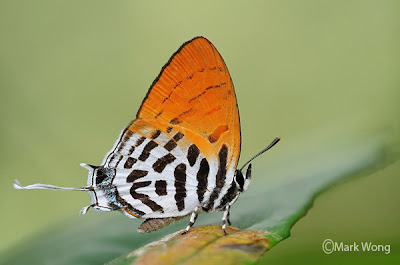 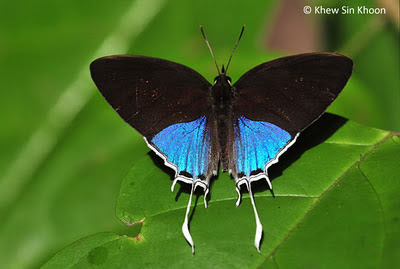 Above, the male is dark brown on the forewing (which also bears an obscure orange discal patch in some specimens) and is purplish blue on the hindwing for most of the lower portion; the female is dark brown on both wings (with traces of an orange discal patch on the forewing) and a series of marginal black spots on the pale bluish tornal area of the hindwing. Underneath, both sexes are alike in having mostly orange forewing and mostly white hindwing. The forewing has post-discal and discal series of faint black striae while the hindwing is marked with prominent bold black bands and spots. The tornal area of the hindwing bears bluish scales up to vein 3. A long filamentous tail occurs at the end of vein 2. In contrast, two much shorter tails occur at the end of veins 1b and 3 respectively. 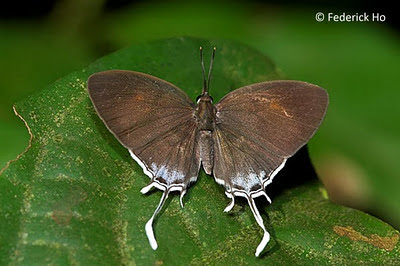 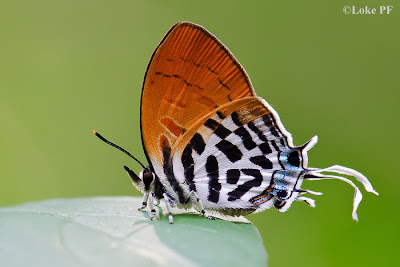 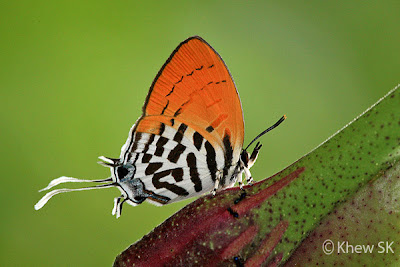 The Common Posy is relatively common  in the nature reserves of Singapore, but with its occurrence mainly confined to the Central and Bukit Timah catchment reserves. The adults typically fly in a hopping fashion, and they have been observed to sunbathe with their wings opened flat in sunlit conditions. The species have been observed to be attracted to the plant sap exuded by young shoots of Leea indica and Smilax bracteata. 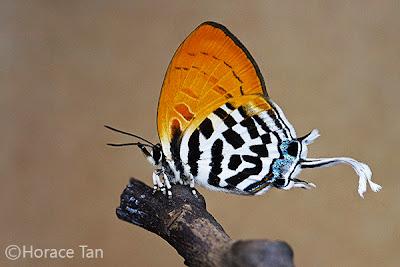 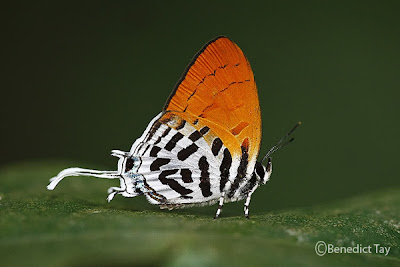 The immature stages of Common Posy are polyphagous. To date five plants have been recorded as its local hosts. Caterpillars of all instars feed on young and tender leaves of the host plants. They are also polychromatic in the early instars, occurring in either a green form or a pink form. 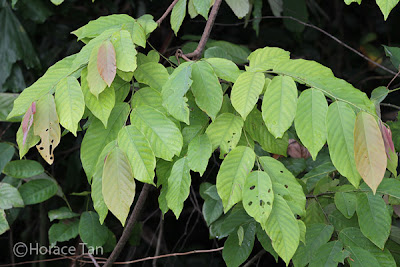 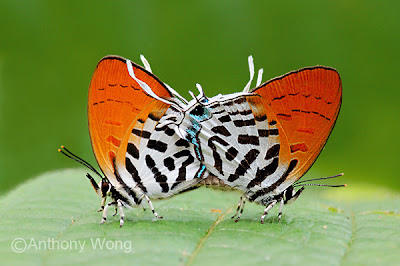 A mating pair of Common Posy.


Eggs are laid on the underside of a young leaf or other parts of a young shoot of the host plant. The white egg, about 0.9mm in diameter, is shaped like a lightly flattened chinese bun with its surface  covered with numerous polygonal pits. The polar pit holds the depressed micropylar. 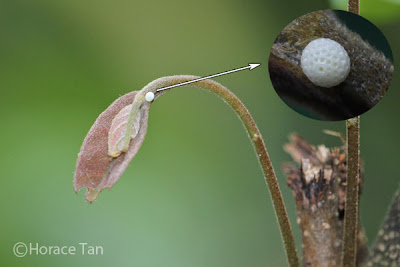 An egg laid on the young shoot of Desmos chinensis. 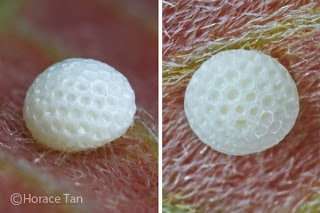 Two views of an egg of the Common Posy. Diameter: 0.9mm. 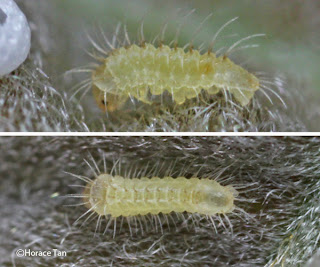 Two views of a newly hatched caterpillar of the Common Posy, length: 1.3mm


As the caterpillar grows, raised tubercles become apparent on the dorsum, one pair to each of 2nd-3rd thoracic segments, and one to each 1st-7th abdominal segments. The body colour is pale yellowish green as the caterpillar grows and feeds on the plant materail.This instar lasts for about 2 days with the body length reaching up to 3mm. 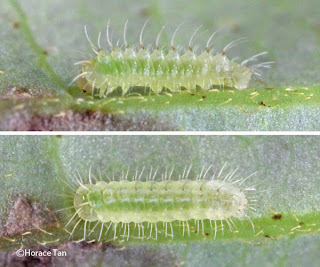 
Covered with numerous short setae, the body of the 2nd instar caterpillar is either whitish with a pale green undertone or yellowish with a dark brown undertone. Each of the 2nd and 3rd thoracic segments has a pair of dorso-lateral conical projections, whilst each of the first six abdominal segments have a short conical projections, taller than those on the thoracic segments. These projections are yellowish brown around the tip and whitish at the base. The growth in this stage brings the caterpillar to a length of about 5-5.5mm, and after about 2 days in this stage, it moults again. 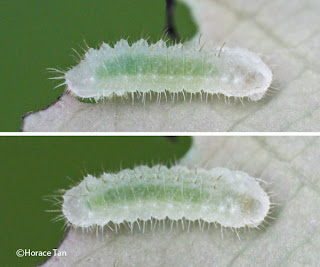 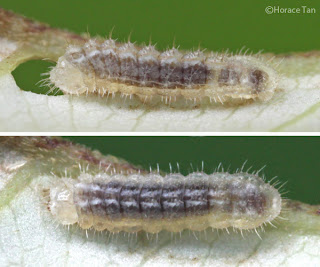 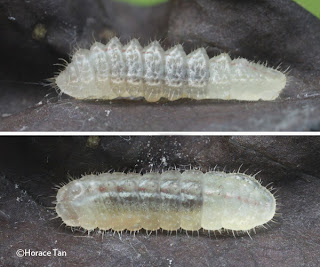 Two views of a 2nd instar caterpillar, late in this stage, dormant prior to its moult, length: 5mm.


The 3rd instar caterpillar resembles the 2nd instar caterpillar closely with minor changes observed. The dorsal projections on the abdominal segments are now longer and pointed than those on the thoracic segments. This instar takes about 2 days to complete with the body length reaching about 8.5-9mm before the next moult. 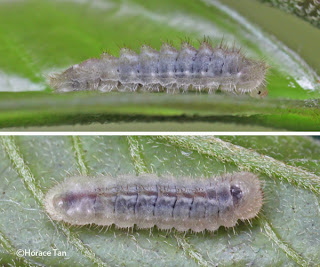 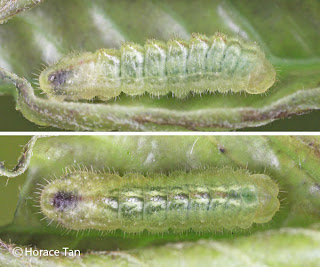 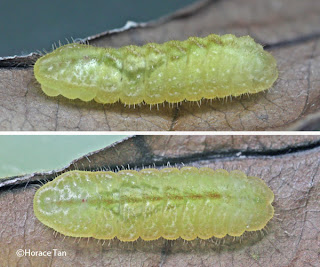 Two views of a 3rd instar caterpillar, late in this stage, dormant prior to its moult, length: 8.5mm.


The 4th instar caterpillar ushers in a drastic change from the 3rd instar: A diamond-shaped marking formed by a reddish brown line running from the dorsum of the 1st abdominal segment to the side of 5th abdominal segment, and then back to the dorum of the 7th abdominal segment, and straight on to the posterior end. The dorso-lateral pairs of projections seen on the 2nd-3rd thoracic segments in earlier instars are no longer discernible. The body base colour is yellowish green in one form and yellowish pink in another.  This instar lasts about 3-4 days with length reaching 17-18mm. 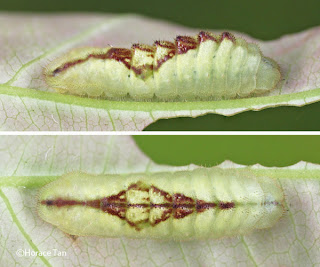 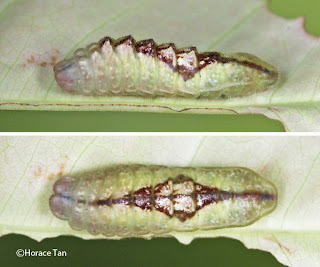 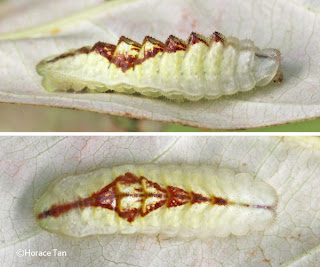 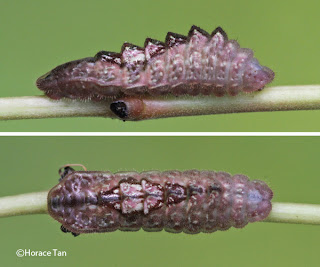 Two views of a 4th instar caterpillar, late in this stage, length: 17mm.


Towards the end of the 4th instar, the caterpillar ceases eating and wanders around for a pupation site. At this time, the caterpillar's body changes to a dark purplish brown coloration, and in some specimens, with a green underdone in the abdominal area. It typically chooses the underside of a stem or branch for its pupation. Here, the pre-pupatory larva spins a silk girdle and a silk pad and then anchors itself on it in a head-down posture. 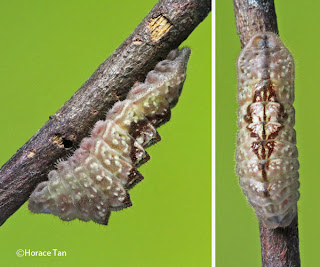 Two views of a pre-pupatory larva of the Common Posy.

A Common Posy caterpillar molts to its pupal stage.


Pupation takes place after one day of the pre-pupal stage. In a typical colour form, the pupa is brownish with with whitish streaks/patches in the thorax and wing pads, and has a large and similarly coloured dorsal patch on the abdomen. In another form, the brown is replaced by black and the abdomen is coloured similar to the thorax. Length of the pupa: 12-13mm. 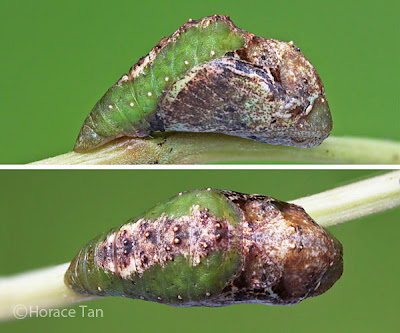 Two views of a typical pupa of the Common Posy. 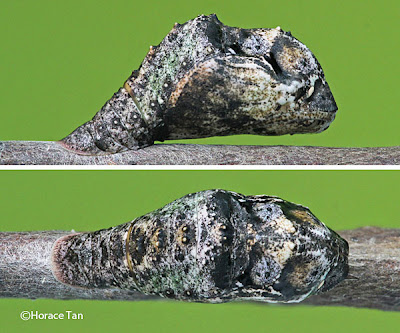 Two views of another pupa of the Common Posy.


7 days later, the mature pupa turns dark in the dorsal and wing case areas, and yellowish brown elsewhere. The next day the adult butterfly emerges from the pupa. 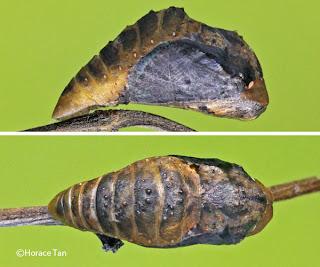 Two views of a mature pupa of the Common Posy. 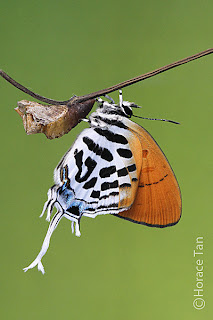 A newly eclosed Common Posy resting near its pupal case.