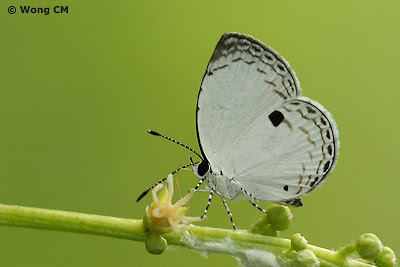 A Quaker feeding on a flowering forest shrub

The month of April saw the intermonsoon winds bringing rather thundery showers in the afternoons of quite a number of days for the early part of the month. From the number of times the MCB (that's Mini Circuit Breaker) tripped in my home this month, I'd say that the lightning/thunder that came with the rains appear to be more frequent this month than in the rainy months towards the end of 2010. 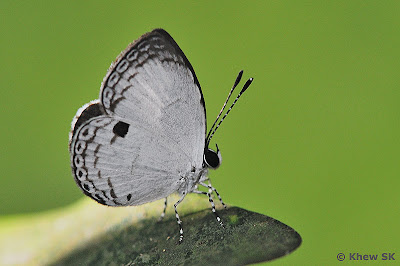 Over here in Singapore, Election fever is in the air, with Nomination Day announced to fall on 27 April and Polling Day scheduled for Saturday, 7 May 2011. From the buzz in local forums, social networking sites, blogs and with the cacophony of comments, opinions and debates, our local cyberspace has never been noisier in recent years. Promising to be a "watershed" elections, GE 2011 will be an election to watch. It's even more exciting for me personally, as this will probably be the first time in my life (!) that I will be voting in a Singapore GE, as the constituency where I live in, has always been returned unopposed for as long as I can remember. 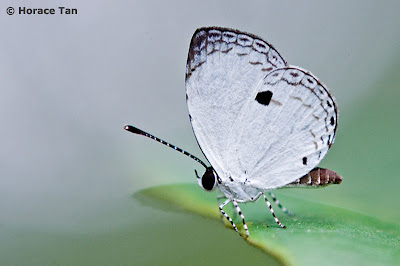 The month of April has been traditionally associated with the "woman's best friend", the most sought-after jewel by mankind, the diamond. Well-known for its amazing hardness, the diamond is often viewed as indestructible, and symbolises permanence and eternity. 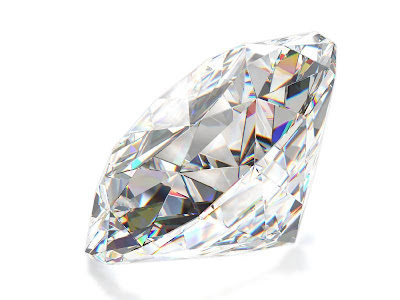 She who from April dates her years,
diamonds shall wear,
lest bitter tears
For vain repentance flow.
- Gregorian Birthstone Poems 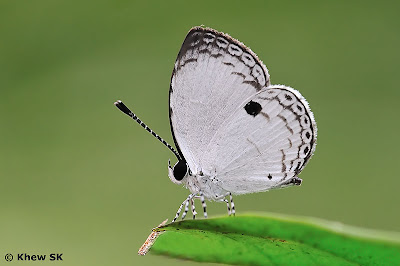 This month we feature a little butterfly that I've always considered as a "diamond in the rough" - the Quaker (Neopithecops zalmora zalmora). This moderately rare butterfly is small, with a wingspan of only about 20-22mm. In many of my encounters with this species, it is always fluttering restlessly in the shaded understorey of forested areas in Singapore's nature reserves. Its white undersides 'shine' brilliantly in contrast to the shaded habitats that it prefers, as it flies with an erratic and restless flight amongst the low shrubbery. 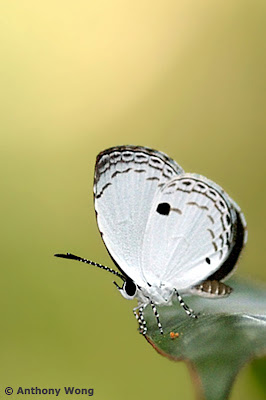 Usually, individuals are observed and the species is by no means easy to locate as it does not appear to favour any particular localised areas, but is instead quite widespread in the forested areas of the nature reserves. I have never seen it in urban parks and gardens. It appears to prefer to stay within the sanctuary of the nature reserves. 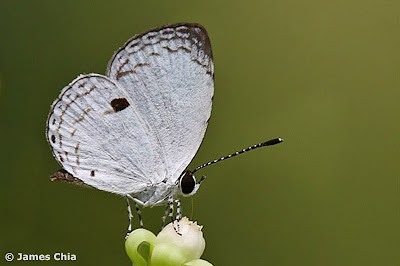 Occasionally, it is found feeding at flowers - most often on the flowers of the Bandicoot Cherry (Leea indica) where it often shares the nectaring spoils with several Skipper species. Even when feeding, it has a habit of sliding its hindwings over each other and keeping them in motion. Its small size makes it a challenge to photograph, especially when it is often encountered in habitats with low light. 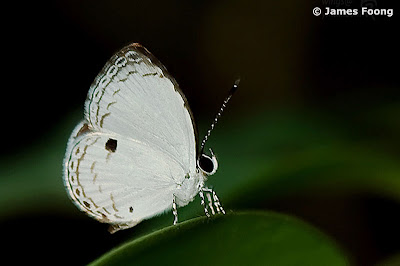 The upperside of the Quaker is predominantly blackish-brown, usually with a sullied white patch on the forewing, that may be absent in males. The underside is pure white with light greyish submarginal markings. There is a distinctive large black circular spot reminescent of a 'black diamond' on the costa of the white hindwing. 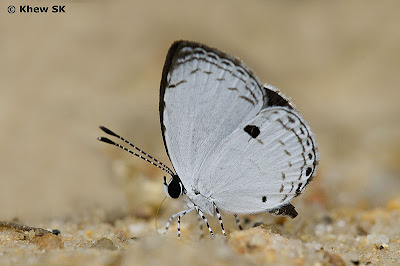 The species has been observed to occasionally puddle at damp spots on the ground where it can feed quietly and almost motionlessly for a period of time. In the late afternoon hours, perhaps after a fill of nectar or other liquid diet, the Quaker can also be found perched on the tips of leaves and twigs where it stays quite still if undisturbed. 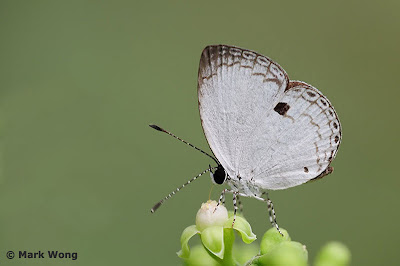 Researching into its curious common English name, the Quaker, I found that Quakers are generally associated with the Religious Society of Friends. The Quakers are a group of Christians who use no scripture and believe in great simplicity in daily life and in worship. Their services consist mainly of silent meditation. Quakers have traditionally been committed to pacifism and are against any form of violence or war. Rather interesting, as my own memories of the word Quaker are usually associated with the popular brand of oats! 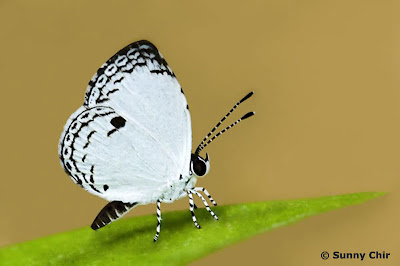 And so we have this little peace-loving butterfly, fluttering like a little bright diamond in our well-shaded forest habitats almost like trying to call our attention to it as it flies restlessly in search of food. 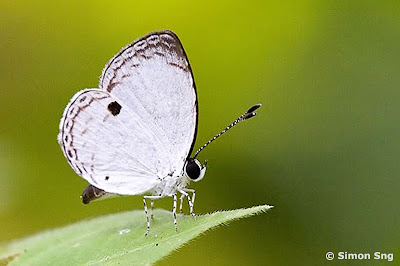