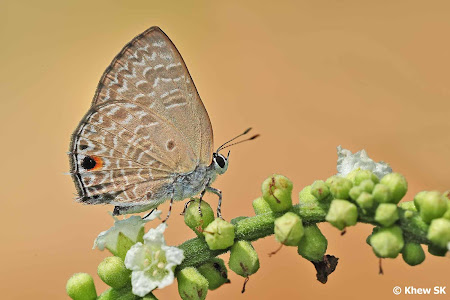 
We have crossed the half-way mark of the extended stay-home-as-much-as-possible "Circuit Breaker" period in Singapore. A less draconian partial lock-down when compared with other countries, Singapore's CB allows residents to access essential services and even go out to exercise with precautions to be taken. It is now mandatory to wear face-masks whenever we go out of our homes, and it is the norm to see everyone masked, except for some individuals who insist on challenging the laws (and paying dearly for it). 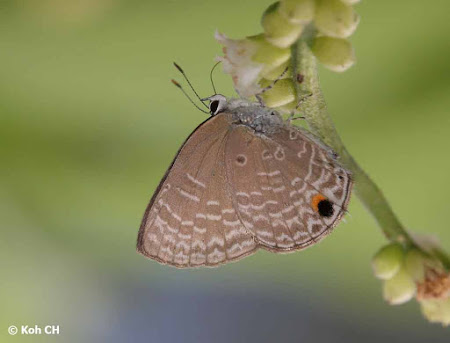 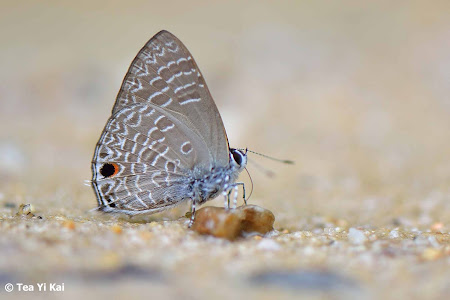 The COVID-19 scourge continues its relentless march all around the world, and this will go down in history as one of the most severe pandemics of our 21st century era. The toll on the health and safety of each country's residents varies, as are the measures that have been taken to "flatten the curve" in infection rates. 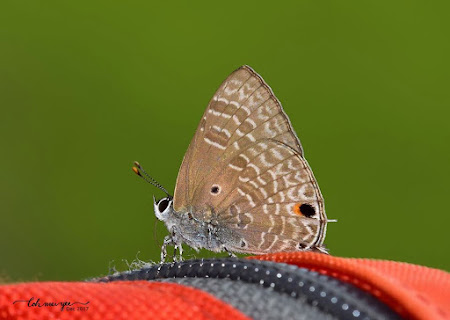 A male Pointed Ciliate Blue feeding off a sweaty backpack 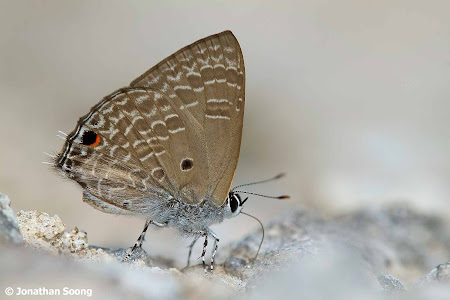 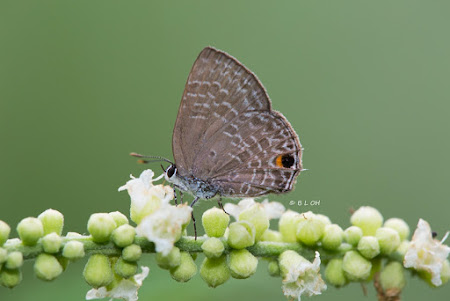 Just a month ago, I wrote that Singapore had just crossed the 2,000 mark in terms of confirmed infections. As of yesterday, the official number was 22,400! - more than a tenfold increase in just about 30 days. Singapore's "2nd wave" of infections occurred mainly in the large concentrations of foreign workers housed in dedicated dormitories. Coupled with intensive testing and a whole regime of healthcare protocols, the number of COVID-19 infections skyrocketed on our little island. 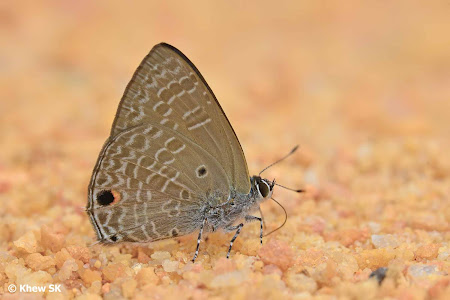 A male Pointed Ciliate Blue pudding at a sandy streambank

Over in other parts of the world, the pace of infections and easing of lockdowns varies. There is always fear of a 2nd wave of infections as people let down their guard and begin to socialise and meet in groups again. At the moment, most countries have some form of border controls to limit imported infections, but there will come a time when this too, will be eased. Hence there are many fronts and weak links that each country needs to tackle. 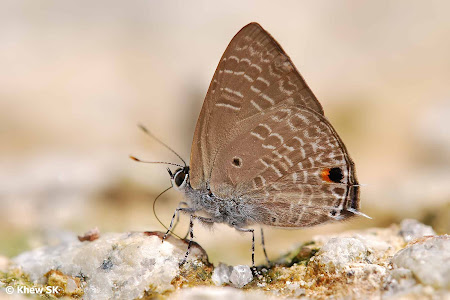 The world economy has taken a severe beating, and analysts have already compared this period to the Great Depression and various other severe recessions in recent history. The balance between infection control and re-booting the economy weighs hard on the minds of the governments of many countries. Many people fear for their future as salaries and jobs will be impacted for sure. Whatever it may be, life will not be the same again, as we look towards a new norm, post COVID-19. 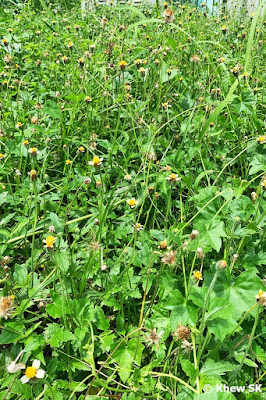 Wild flowers, in this case, Coat Buttons, growing abundantly due to lack of grass cutting and maintenance because of the partial lockdown in Singapore.

We head into the hotter months of the year, and temperatures are certainly warming up in Singapore, despite the intermonsoon rainstorms descending on us. There have been observations of more butterflies in our urban landscapes, primarily due to reduced grasscutting and more wildflowers/weeds sprouting with wild abandon - a good side effect of lockdowns? 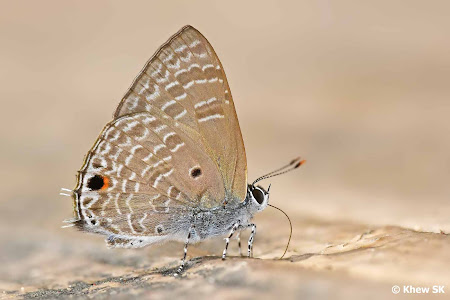 Our Butterfly of the Month for May 2020 is the Pointed Ciliate Blue (Anthene lycaenina miya) a small Lycaenid that is considered moderately common. It has a widespread distribution across Singapore, being found in urban parks and gardens as well occasionally in the forested areas. It is a small butterfly, with an average wingspan of 25-30mm. It has a rapid and erratic flight. 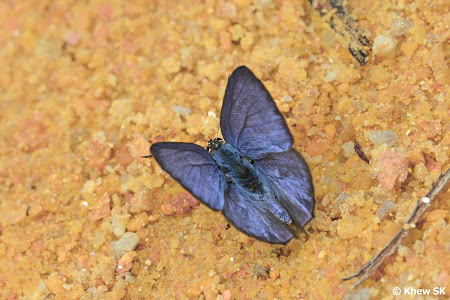 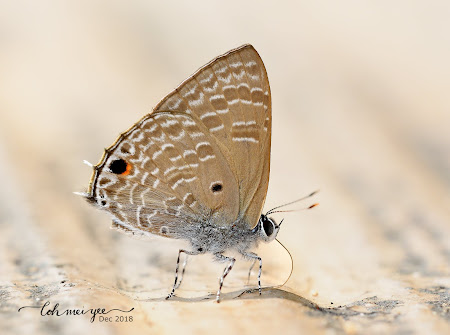 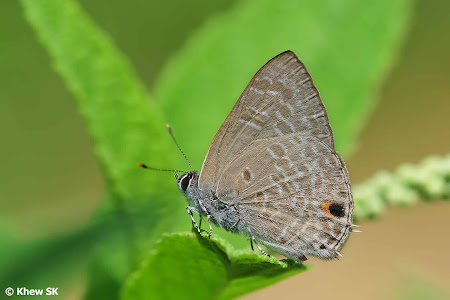 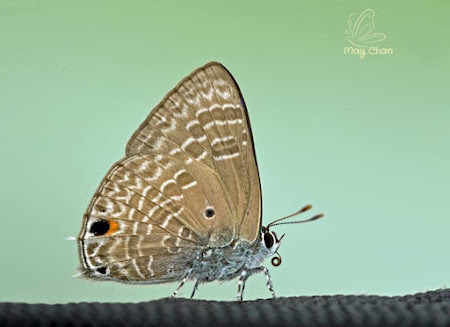 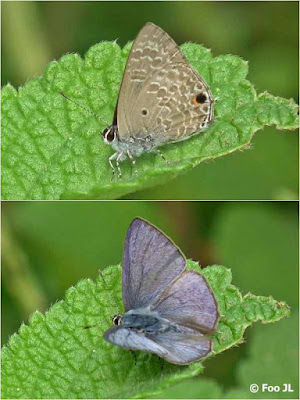 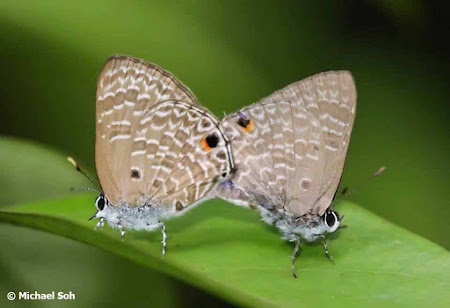 A mating pair of Pointed Ciliate Blue - female on the left, male on the right 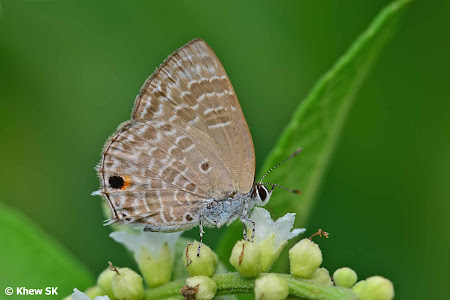 A unique feature of the Anthene species is the pair of short fine white "tails" at veins 1b and 2 of the hindwing. These "tails" are actually extensions of the hindwing cilia (short fringe hairs along the wing margins). In pristine individuals, particularly females, there is also an extension of the cilia at vein 3 to suggest another very short indistinct "tail". 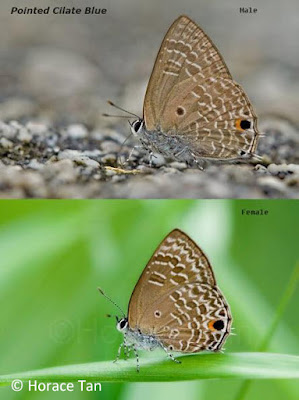 Males of the Pointed Ciliate Blue are often seen puddling at damp footpaths, sometimes in the company of other Lycaenid puddlers. Females are more regularly encountered feeding at flowering bushes. The termen (outer margin) of the forewing of the females is more curved compared to the males.

Posted by Commander at 6:39 PM 0 comments