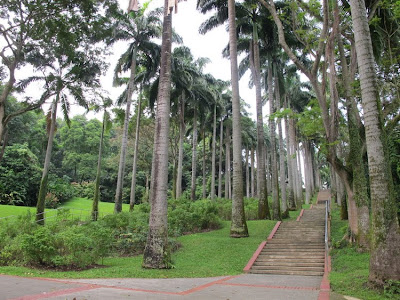 This urban park, developed on a hillock, is the bigger of two town parks at Ang Mo Kio Town. Flanked on two sides by roads - Ang Mo Kio Ave 5 and Ave 6, and on the other two sides by residential estates, this park boasts a total area of about 21 Hectares. 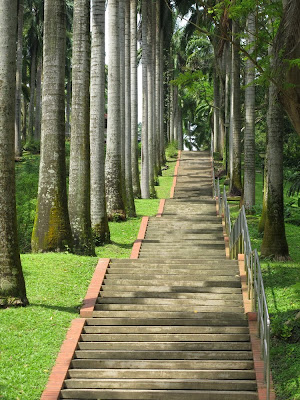 A 120-step concrete staircase takes you up to a small shelter mid-way and up to a plaza right at the top where you can view the lush greenery and landscaping from a high vantage point. 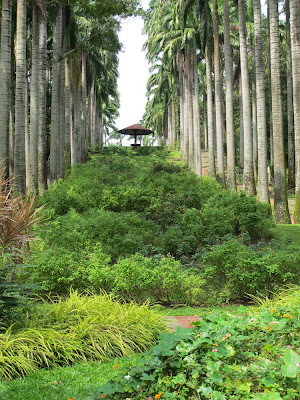 Rows of majestic Livistonia palms rising a few stories high, line the steep slope, creating a formal colonnade of natural columns, drawing the eye upwards and towards the plaza at the top of the hill. At the entrance to the park from AMK Ave 6, there is a small pergola adorned with the pink flowers of the Honolulu creeper (Antigonon leptopus). To the right of this pergola is a large pond covered with water lilies. 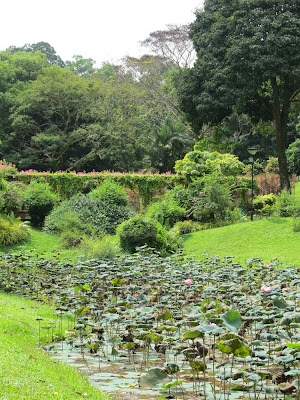 A small patch of Lantana surrounded by tall Dracaena marginata shrubs and other palms, greet visitors to the park. The Lantana flowers attract several species of butterflies, like the Peacock Pansy, Lemon Emigrant and the Leopard. 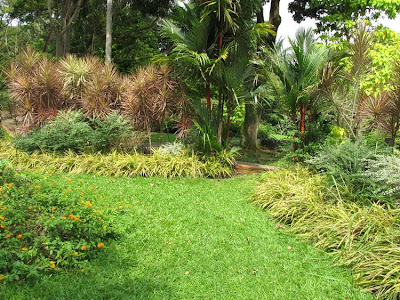 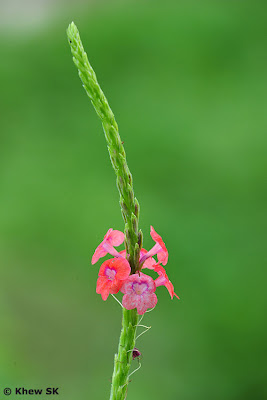 The patches of Snakeweeds wind sinously up the slope and the flowers of both species of the "weed" attract many butterflies like the Chocolate Pansy, Lemon Emigrant and Common Grass Yellow. 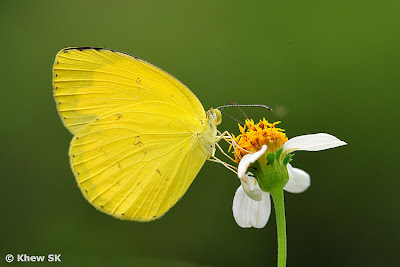 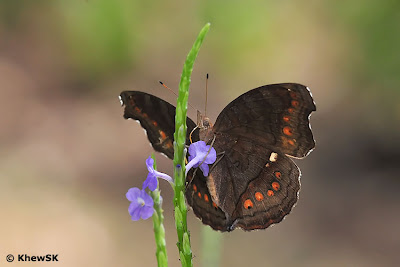 Moving up the slope the planting changes further with patches of Singapore Rhododendron and the Powderpuff Flower (Calliandra haematocephala) and various other leafy plants. Past the shelter (which comes in handy if it rains) one moves further up and the planting along the slope changes again, but this time of the green leafy varieties. 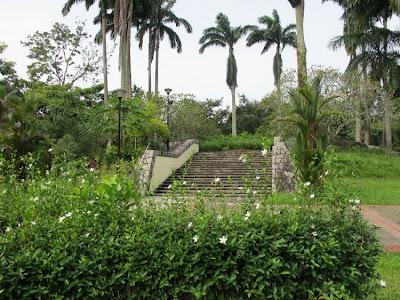 At the final flight of steps up to the small plaza right at the top of the slope is a diamond-shaped kerbed planter that is filled with more Snakeweed, Peacock Flower and a rather lush growth of Bidens sp. It was interesting to note that the Bidens sp. sport exceptionally tall and leafy green leaves and not too many flowers. At the location, there were many skippers like the Small Branded Swift, Formosan Swift, Grass Demon as well as the fast-flying Pierids like the Striped Albatross and Lemon Emigrant. 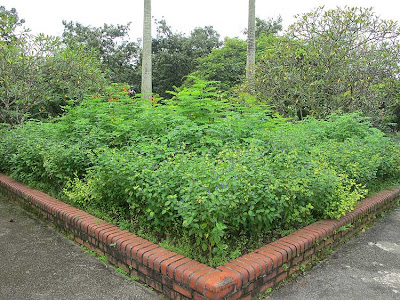 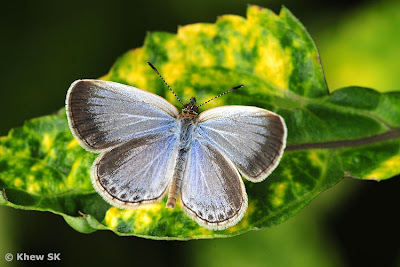 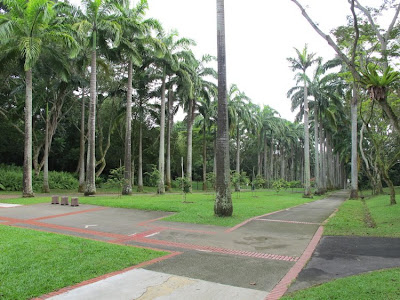 A Common Mormon flies past, as I was trying to shoot a sun-bathing Formosan Swift, as several individuals of Common Grass Yellow flutter around the flowers and leaves of the Peacock Flower - some ovipositing on the leaves. A couple of Chocolate Pansies frolick in the warm morning sunshine.. A solitary Common Mime makes a hurried pit-stop at the purple flowers of the Snakeweed, taking a quick sip of nectar, before flying off quickly.

As I sat at the plaza watching the butterfly activity, there were several people practising Qi Gong on the lower level, and many joggers running by, obviously regulars at this park. Several families with their kids screaming gleefully can be seen (and heard) on the lower terrace jogging paths. A lady sat on the granite balustrade of the plaza, totally absorbed in her book, and oblivious to the butterflies that were fluttering beside her. 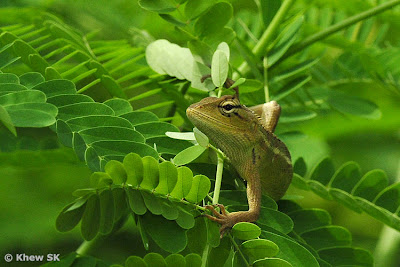 Danger lurks amongst the bushes. This Changeable Lizard waits stealthily for its prey
Just below the plaza platform, was a patch that was allowed to grow "wild". It appears that this patch was reserved as a community gardening patch with various recognisable herbs and spice plants like Lemon Grass, Pandan, Banana and so on. 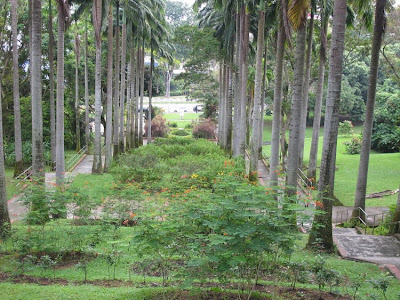 As the morning grew hotter, I made my way back down towards the pond. Along the way, I encountered a few Leopard butterflies frolicking restlessly near their host plant of Flacourtia inermis. Back at the Lantana patch, I was surprised to see a Copper Flash and the Yellow Palm Dart (our new migrant from Australia). It was some time since I last saw one of these species that we can now consider one of our "foreign talents" that has made Singapore its home. You can read about the discovery of this species in an earlier blog article. 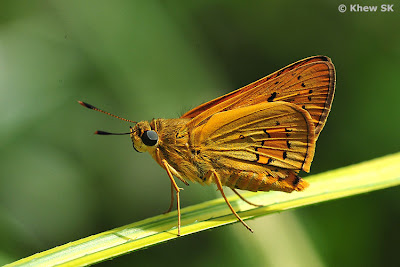 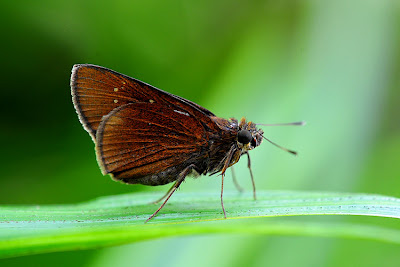 At the road level, the pond is a welcoming sight to visitors, particularly in the early morning when the vibrant pink water lily flowers dot the surface of the pond. 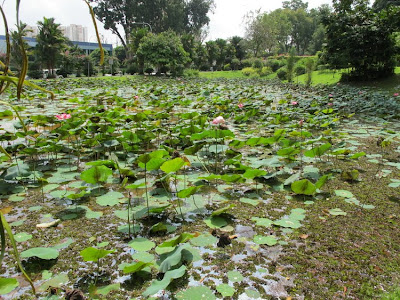 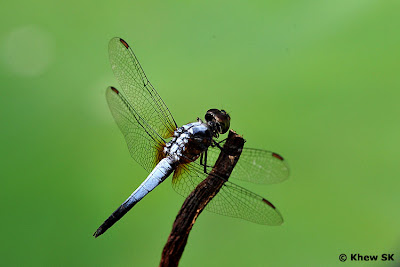 This waterbody is a dragonfly enthusiast's haven, with at least 10 or more species flying around the edges of the pond and resting on their favourite perches, returning time and again, even when disturbed. 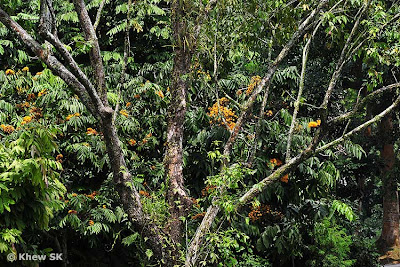 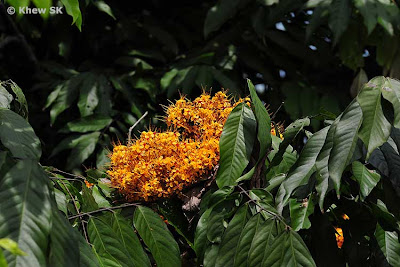 Along the fringe of the pond, a number of Saraca cauliflora trees were in full bloom, with their attractive orange-yellow flowers busy with Lemon Emigrants and Painted Jezebels. 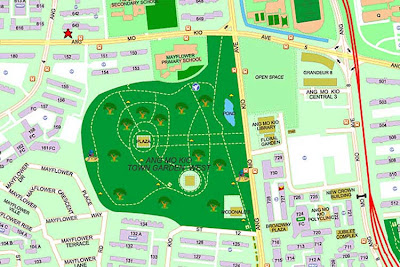 Here we have an urban oasis, with lush greenery, attractive flowers, butterflies, dragonflies and birds all thriving in proximity to HDB apartments and the busy traffic thoroughfare in Ang Mo Kio New Town. I have not explored the full 21 Ha of the park, with its many jogging tracks, a bird-singing plaza and several other features. But the landscaped area, busy with butterflies would keep many an enthusiast occupied for an hour or two. 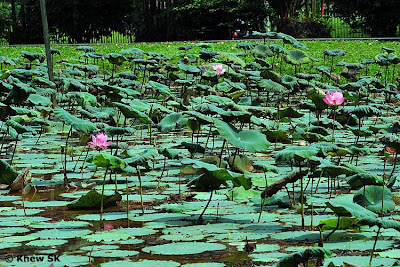 So if you have a couple of hours to spare and would like to shoot some urban butterflies, this park is conveniently located, and on Sundays, the limited number of carparks alongside Ang Mo Kio Ave 6 is free of charge! And if you're hungry or thirsty after the short walk and a morning of butterfly watching, the MacDonald's outlet is just about 100m away from the main plaza.
Text & Photos by Khew SK