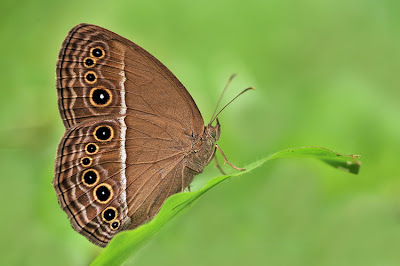 This month, we feature a species from the sub-family Satyrinae. This sub-family, referred to by its common collective English name of "Browns and Arguses", consists of many drab coloured and inconspicuous butterflies. Many are common and their caterpillars feed mainly on monocotyledons, e.g. grasses, padi & bamboos. 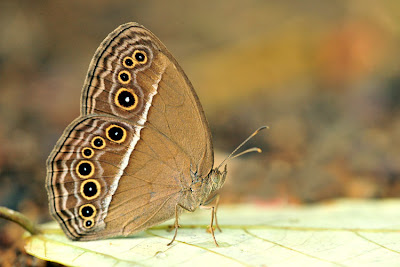 Another female Dingy Bush Brown lurking on the forest floor

The Dingy Bush Brown (Mycalesis perseus cepheus) is one of several species of the genus Mycalesis found in Singapore. The butterflies are small, drab brown with a pale post-discal band on the underside of both wings, often with a wingspan not exceeding 50mm, and have multiple ocelli on both the upperside and underside of the wings. They tend to fly in semi-shaded environments, amongst grasses and undergrowth along the fringes of wooded areas. They are not fast-flyers, preferring to remain low in the undergrowth and stop with their wings folded upright. However, they are skittish, and not easy to photograph properly. 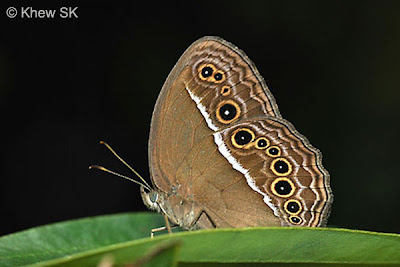 The Dingy Bush Brown can be separated from its closely related species in the Mycalesis genus by the hindwing ocellus in space 2 on the hindwing moved in and well out of line with those adjacent to it. 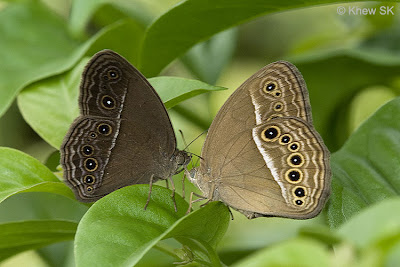 In Singapore, the species is local in distribution, but not rare. Where it is found, several individuals can often be seen, fluttering in the low shrubbery and feeding on organic material on the forest floor. It often flies in the company of its relatives the Dark Brand Bush Brown (Mycalesis mineus macromalayana) and the Long Brand Bush Brown (Mycalesis visala phamis) with which it could be confused, as well as the Nigger (Orsotriaena medus cinerea). The Dingy Bush Brown males are of a much darker brown in colouration than the females. The post-discal band on the underside of the females' hindwings is usually broader. 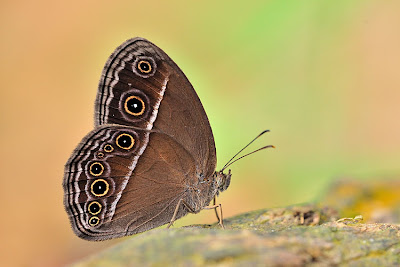 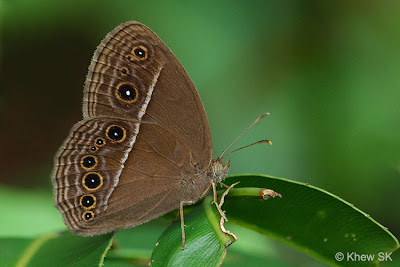 A male Dingy Bush Brown perching on a leaf

The Dingy Bush Brown is, more often than not, unappreciated by most observers, as it is considered "unattractive" and unremarkable. Its drab brown and low-profile behaviour in the field also tend to keep it much ignored by most butterfly watchers. However, upon looking closely at its ocelli and shape of the wings, one can say that Beauty is often in the Eyes of the Beholder, and one needs to look closer to see that the Dingy Bush Brown can also be considered a pretty butterfly in its own right! 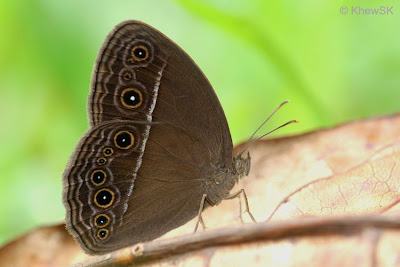 Text & Photos by Khew SK
Posted by Commander at 9:49 AM 1 comments