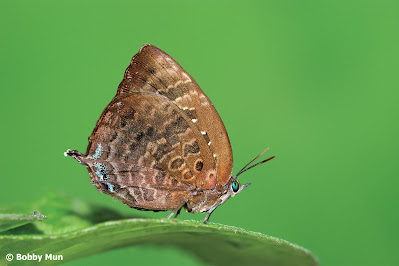 The first quarter of the year 2022 is almost over. But it has been another eventful month globally as the world deals with the spectre of a potential world war that has not been seen since the end of 1945. World powers watch by the sidelines, as the Russian invasion of Ukraine continues, and civilian casualties mount. Economic sanctions have been imposed on Russia, but to little apparent effect to stop Russia's onslaught. 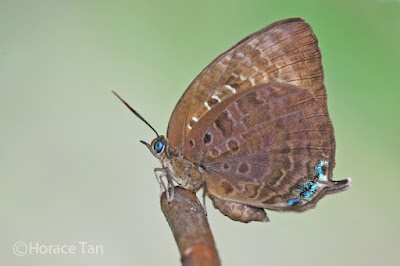 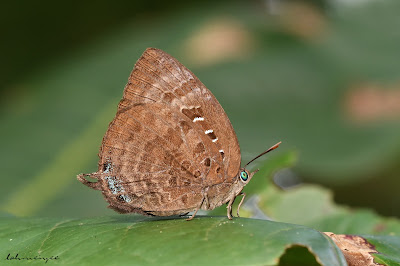 How this localised war will turn out in the coming weeks, remains to be seen. The grim reminder that Russia is in possession of the world's largest number of nuclear warheads, capable of reaching anywhere globally, is on the minds of military strategists who may be considering a fast and decisive intervention to end the war. And so Ukraine continues to defend itself with its own conventional military tenacity, as no other sovereign nation would want to involve itself in the fray at the moment. 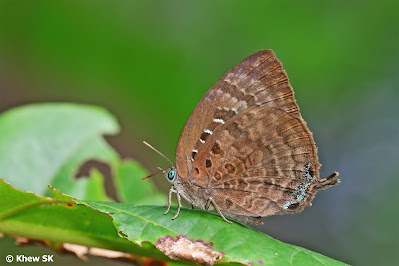 An uncommon sight of a Centaur Oakblue feeding on nectar from a Spanish Needle flower
Economic sanctions designed to weaken Russia's resolve to conquer Ukraine appear to have undesired side effects on the global economy. When Russia, one of the world's largest oil producers, is affected by any form of sanctions that affect its oil exports, the price of oil shoots through the roof. Today, the price of a barrel of crude oil has soared to almost 6 times the price in Mar 2020 when Covid first hit the world. The implication of this is that everything that depends on oil increases in tandem. 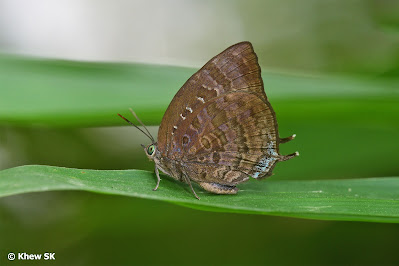 A Centaur Oakblue lurking in the shaded forest understorey
Back in Singapore, the price of a litre of premium 98 octane petrol shot past S$3 per litre - a record price not seen in Singapore in recent history. This not only affects vehicle owners, but everything else that depends on logistics and mobility - deliveries, shipments, travel, etc. In essence, practically everything. And we have already felt the impact of this when many F&B outlets immediately raised the prices of food and drinks, citing rising costs. 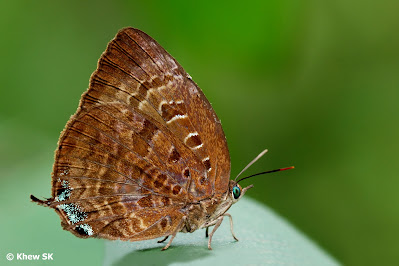 Whilst the cost of living has become a major concern for the population for Singapore and elsewhere globally, there is some light at the end of the tunnel on how Singapore is beginning to transition out of the Covid management controls. From 29 March, a major relaxation of the control measures is welcome news to the residents of Singapore. The government's announcement with regard to the easing of these measures has brought more cheer as we move towards living with the virus in our daily lives. 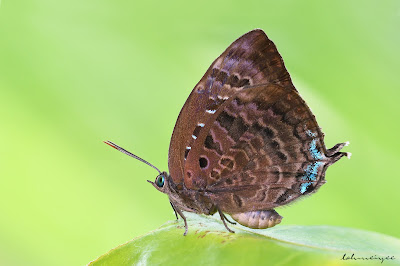 Our Butterfly of the Month for March 2022 is the Centaur Oakblue (Arhopala centaurus nakula). The Centaur Oakblue is one of the largest species of the genus Arhopala found in Singapore. The genus itself comprises many lookalike species that is often frustratingly challenging to identify Their cryptic nature and almost identical markings make their identification difficult. And from the early authors' checklists, a species that has not been recorded as extant in Singapore does not necessarily mean it is not found here. It may mean that a species is very rare, or possibly not positively identified. 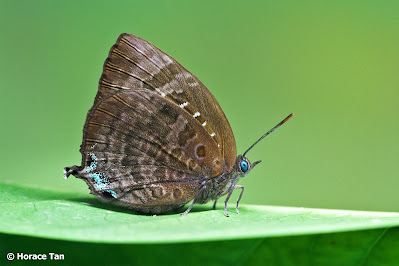 However, the Centaur Oakblue is a species that is relatively easy to distinguish from its many lookalike cousins in the genus. It is quite widespread in distribution and can be found from urban parks and gardens to the mangrove areas as well as forested nature reserves. That it has a variety of caterpillar host plants that range from the Sea Almond, several Syzygium spp, and the parasitic Common Chinese Mistletoe, partly explains its presence in many habitats across Singapore. 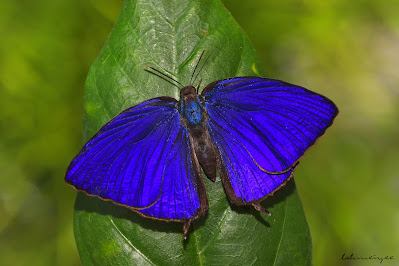 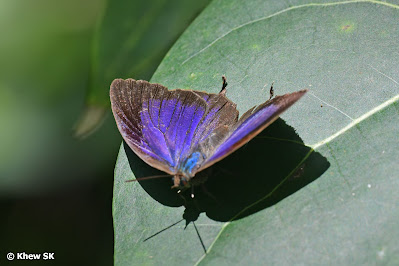 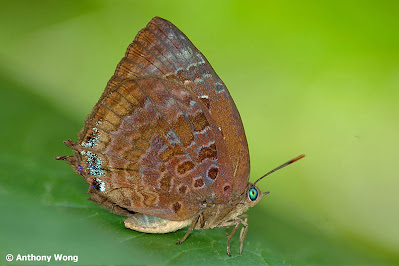 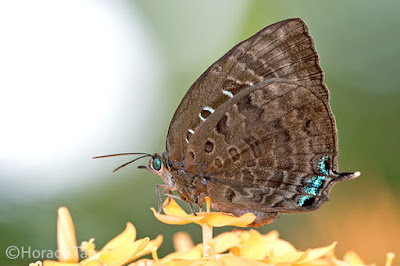 The underside is a medium brown with darker striations and bands arranged in the typical Arhopala fashion. The tornal area of the hindwing has green iridescent scaling, and there is a thick white-tipped tail emerging from vein 2 of the hindwing. Like most of the species in the genus, the eyes of the Centaur Oakblue are greenish blue.