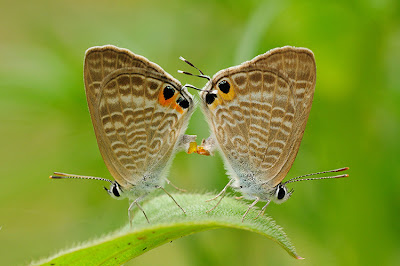 The Pea Blue is a widespread and common butterfly, and described to be distributed from southern Europe, throughout Africa, spreading throughout the Indo-Australian region all the way to Hawaii. On hot sunny days, it is fast-flying and skittish, but stops to perch on its favourite leaves regularly. The caterpillars feed on the Rattlebox Bush (Crotalaria pallida) and Rattleweed (Crotalaria retusa) which are common plants in wastelands and secondary forest.
This pair of mating Pea Blues was shot last Sunday at Gardens by the Bay, where it is a resident species at the areas where its caterpillar host plants grow. ButterflyCircle member Mark Wong took the opportunity to shoot this pair perched on a leaf whilst they were indisposed.

Posted by Commander at 9:59 PM 3 comments