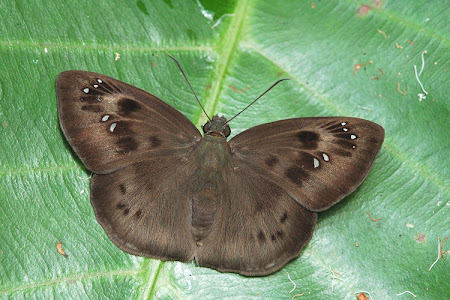 This all-brown upperside Snow Flat is the last of the four species of the Tagiades genus that is found in Singapore. It is the commonest of the four and is mainly encountered in the forested nature reserves in Singapore. Like the other related species, it has a habit of sunbathing on the top surfaces of leaves with its wings opened flat.

The upperside of the Common Snow Flat is predominantly brown with the usual darker markings on both wings and hyaline subapical spots. However, it does not have the white tornal area on the upperside of its hindwings like the other species, making it a rather drab, moth-like butterfly. On the underside, the hindwing is suffused with bluish-white scaling.
Posted by Commander at 8:00 AM 0 comments