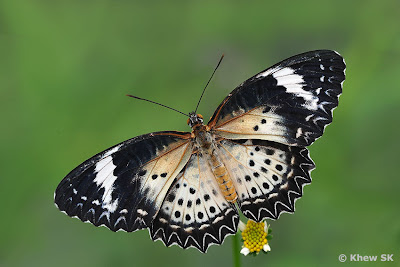 The Leopard Lacewing is a recent migrant to Singapore and was first discovered some time in late 2005. It had earlier been recorded in Malaysia on Pulau Langkawi in late 1999 and early 2000. How it first appeared in Malaysia and eventually Singapore, is anyone's guess. As an easy-to-breed species, with its caterpillars feeding on a variety of Passifloraceae species, it is versatile enough to adapt to several host plants to survive. Also, a female of this species can often lay up to 50-100 or more eggs in its lifespan, aiding in its spread across any area that it has managed to colonise.
This shot shows the upperside of a female Leopard Lacewing. The characteristic pale creamy colour of the wings easily sets it apart from the other Cethosia species found in Singapore. Males tend to outnumber females in this species, even in a controlled breeding facility. The species displays aposematic colouration and is known to be distasteful to predators.