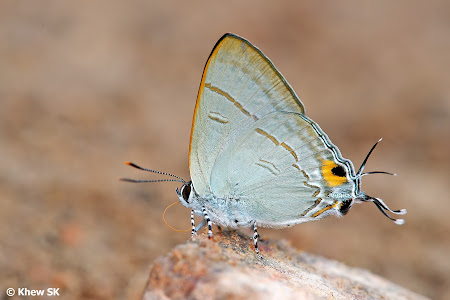 A Common Tit puddles on a small stone.  The forewing is grey and weakly shaded with ochreous brown along the termen


In an earlier discussion on dimorphism and polymorphism in butterflies, we saw that in some species of butterflies, one or both sexes occur in two or more discontinuous forms due to a difference in their genetic constitution. Unlike seasonal forms (which are uncommon in Southeast Asian butterflies) which are physically differentiated primarily due to environmental factors, the forms that are caused by genetic variation are called morphs and usually given separate names. 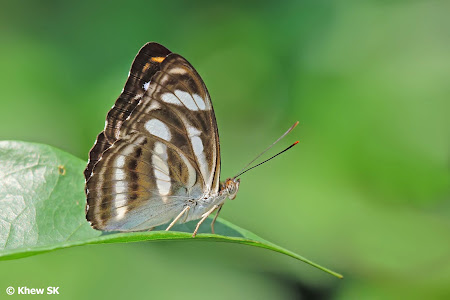 A male Colour Sergeant perches on a leaf in a sunlit spot.  Note the orange subapical spot on the upperside of the forewing


The more obvious species that are dimorphic or polymorphic in either the males or females are well documented. Some examples are the Common Mormon (Papilio polytes romulus), of which the females occur in two forms, the Plain Tiger (Danaus chrysippus chrysippus), which occurs in two forms, and the Malay Baron (Euthalia monina monina) in which the male occurs in at least 3-4 different forms. 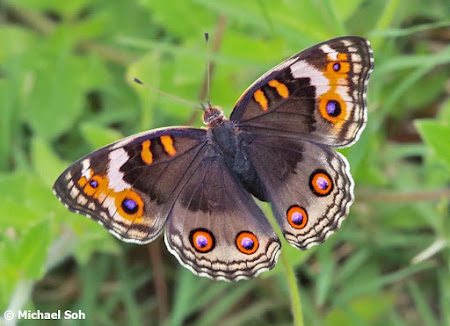 A female Blue Pansy with the typical brown hindwing colour


With observations over the past 3-4 decades of butterfly watching in Singapore, there are a few species that warrant closer observations for potential dimorphism. Although undocumented, these species may be good subjects for scientific research as to whether the regular variations observed suggest the possibility of a divergence in the physical characteristics of the species such that they may be considered dimorphic. These species are discussed below : 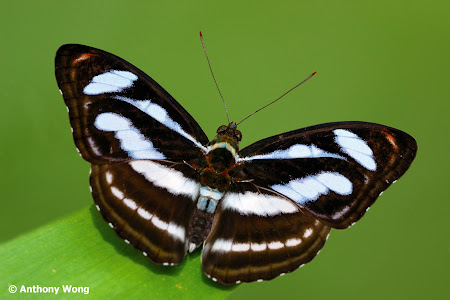 A male Colour Sergeant with orange subapical spot.  This individual was photographed at Mt Faber Park 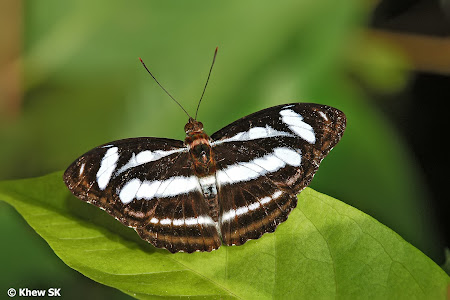 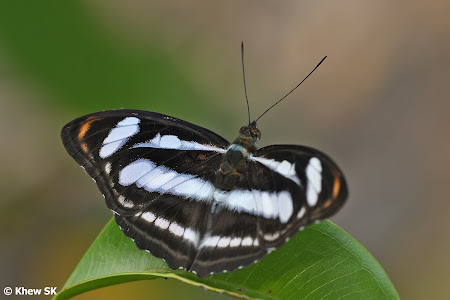 A male Colour Sergeant with orange subapical spots on the forewing.  This individual was photographed at Ulu Sembawang Park Connector

The typical male, as described, is rich velvety black with the white markings tinged with bluish. The apical spot in space 6 of the forewing is usually white, but individuals have been recorded here in Singapore where this spot is more than just "tinged with orange". In some examples shown here, the spot is quite large and distinctly orange - even in bred specimens. 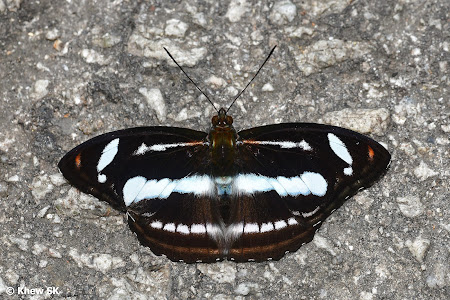 A male Orange Staff Sergeant (Athyma cama gynea) with orange subapical spots on the forewing.  This species is not found in Singapore and prefers montane habitats. 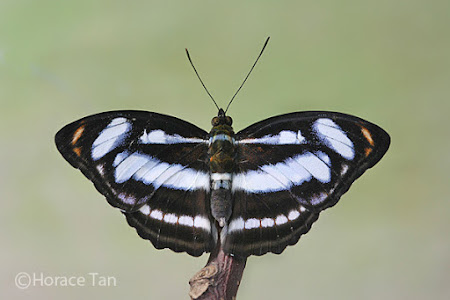 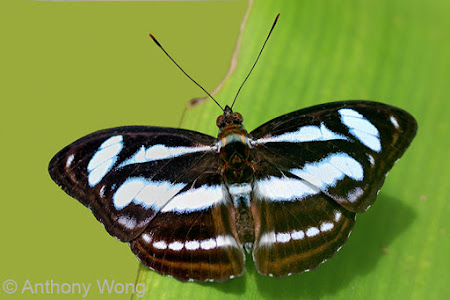 
The variation of this subapical spot ranges from totally white with no trace of orange, to almost orange, with a range of variations in-between. This is contrasted with the similar-looking Orange Staff Sergeant (Athyma cama gynea) which is montane and does not occur in Singapore, where the subapical spot is orange. Would it be possible that the male Colour Sergeant occurs in two "forms" - one with the white subapical spot, and the other with an orange subapical spot? Or is the difference in the colour of this spot too insignificant for the male to be considered dimorphic? 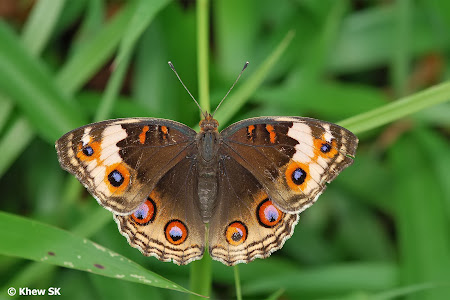 
This common urban species is widely distributed in Singapore, primarily due to the abundance of its caterpillar host plant, the Chinese Violet (Asystasia gangetica). The male is distinctive, with its attractive bright blue hindwing and cannot be confused with any other species in the region. The female, which is described as coloured with more sombre hues, and has a half bluish-grey hindwing. 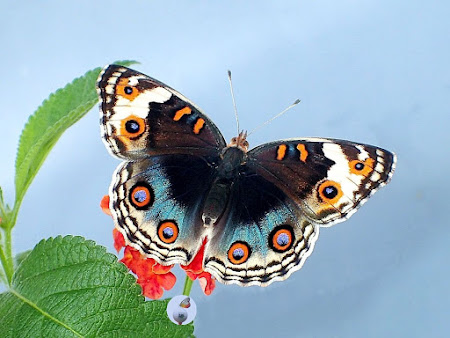 A female Blue Pansy with extensive blue shading on the hindwing 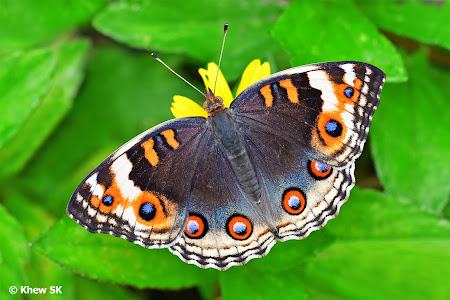 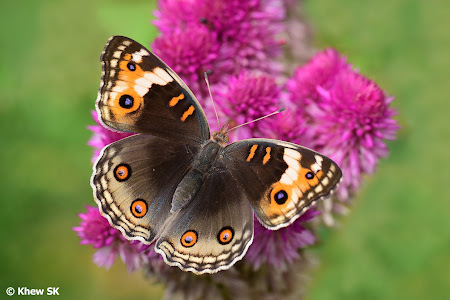 A female Blue Pansy with almost all-brown hindwing, and only slight blue shading at the dorsum of the hindwing 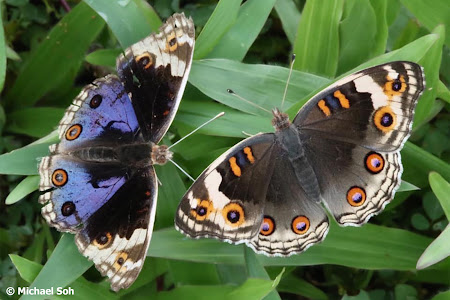 A pair of Blue Pansy (left : male and right : female).  The female has all-brown hindwings 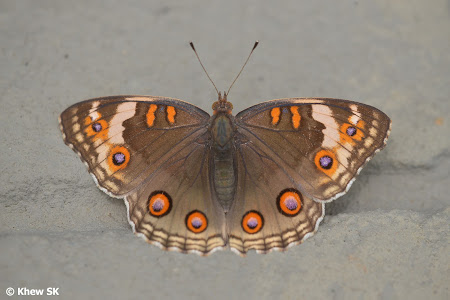 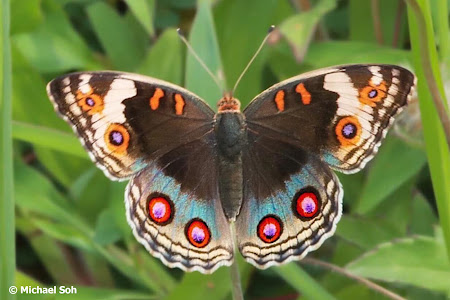 A female Blue Pansy with strong blue shading on the hindwing


Whilst the extent of the blue colour on the hindwing of the female Blue Pansy is variable, the occurrence of totally brown females with no blue presents a question of whether there could be genetic variation at work that could point to some form of dimorphism in the females. As there are no distinct seasonality of the occurrence of the blue and brown hindwinged females, it is unlikely to be a subject of dry or wet season forms here. 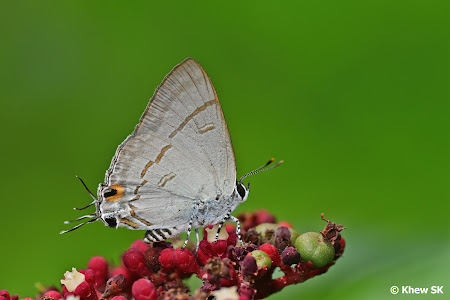 
This small and common urban species can be found in Singapore's parks and gardens as well as on the fringes of the forested nature reserves. In this species, the range of the colour of the underside of the forewing ranges from pale greenish grey with "weakly shaded with ochreous brown along the termen" to a very strong and obvious orange shading appearing like a submarginal band on the forewing. 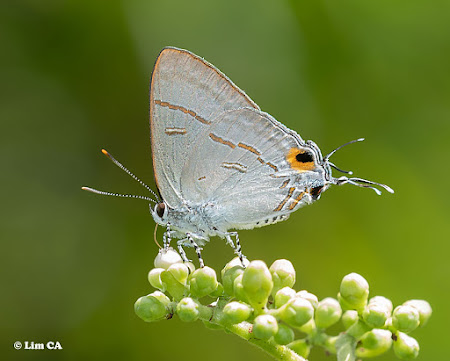 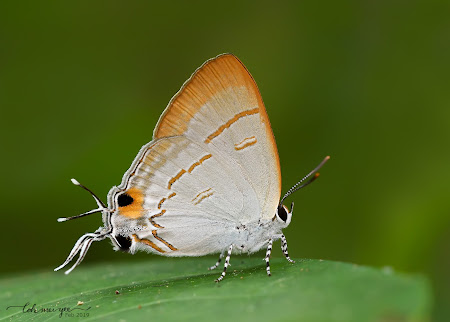 An "orange form" of the Common Tit with extensive orange shading on the underside of the forewing, making it appear like a band along the termen margin 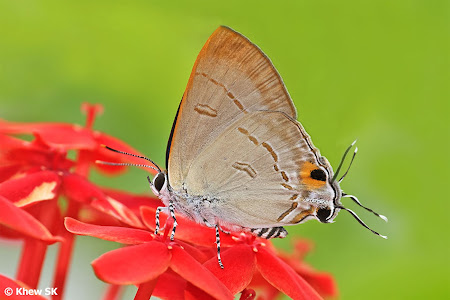 A Common Tit with extensive orange shading across both wings


In some pristine individuals, the orange underside is so distinct as to even closely resemble the related species, the Dark Tit (Hypolycaena thecloides thecloides) whose underside of the wings are consistently orange. At the other end of the spectrum, there are individuals of the Common Tit that appear almost grey, with the post-discal bands a deeper orange-brown compared to the brighter orange bands in the orange "form". 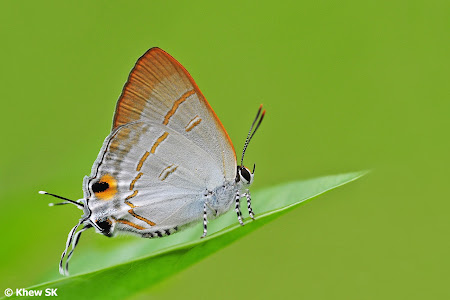 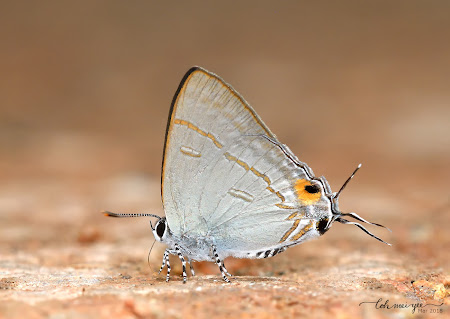 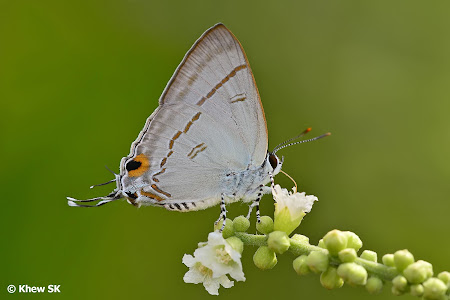 A Common Tit with minimal orange shading along the termen, making it appear grey compared to the extensive orange "form"


Would the variations in the colour of the underside of this species suggest some form of dimorphism? Individuals of the orange or grey "forms" appear consistently enough to imply that these are not aberrations. Is there a possibility of two different forms of the Common Tit? This is a subject that may be worth pursuing by researchers who are keen to take this observation further. 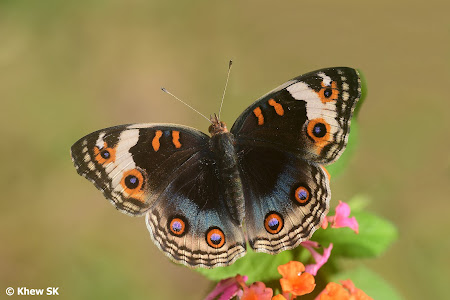 The observations here are for discussion, and certainly does not claim to be conclusive with any scientific rigour. The possibilities of dimorphism of these species with distinct forms will have to be researched and studied further.  But the observations are intended to spark off further thoughts and considerations for those who may be interested to find out more.

Posted by Commander at 8:44 PM