A Butterfly's Proboscis - Its Lifeline to Survival 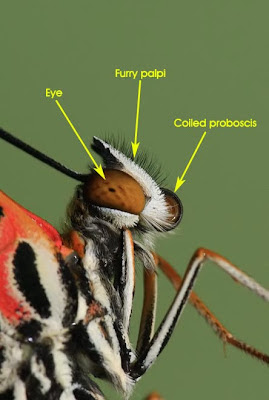 Butterflies are well-known for their beauty and grace and are one of the most admired and adored creatures of the insect world. Most people are aware that butterflies do not have chewing or biting mouthparts, nor have any sort of defensive mechanisms which scratch, sting, bite or poke, unlike most other insects. How then do these pretty and harmless insects derive their sustenance for survival? 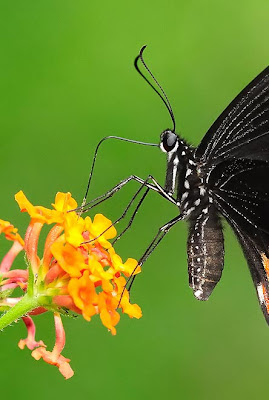 They feed on a liquid diet through their adult life, imbibing dissolved sugar, salts and other minerals from a variety of sources ranging from flowers, rotting fruit, tree sap, carrion, urine, faeces and so on. Some species are also partial to human sweat and will stop to feed on sweaty forearms, faces and hands of humans who are in the vicinity of these hungry butterflies! 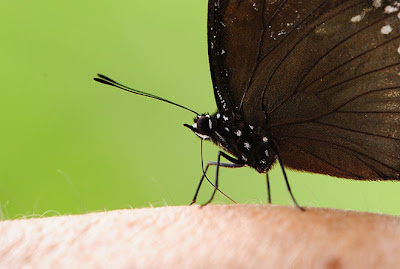 A Malayan Eggfly uses its proboscis to suck up human sweat!

Butterflies feed through a paired tube located at their heads. This paired tube is called the proboscis. The Greek origin of proboscis comes from "pro" (before) and "boskein" (to feed). The word proboscis is pronounced in two different ways, both of which are acceptable - (pro-BOSS-iss or pro-BOSS-kiss). Click on the links to hear the pronunciation of the word proboscis.

Through the amazing process of metamorphosis, the caterpillar's biting/chewing mouthparts - for eating their host plants, transforms into the paired "drinking straw" proboscis. When the butterfly ecloses, besides pumping fluids into its limp wings to expand them, it also has to get its proboscis in working order. As it ecloses from its pupal case, the butterfly's proboscis is in two separate pieces that are joined together by tiny hooks and fringes. The eclosing butterfly has to twist and curl the two halves of the proboscis to create one drinking tube. If, in the event this preparatory function is interrupted, the butterfly can no longer feed, even though it is able to fly, hence condemning it to a short life of hunger and starvation. 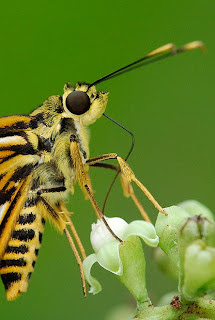 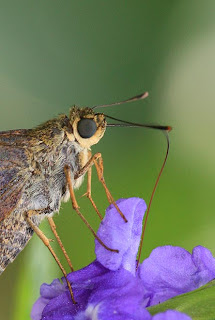 Situated between the butterfly's eyes, but below them, is the proboscis. This paired structure, comprising two halves, are hooked together after eclosion, forming a central canal. The proboscis is usually coiled up like a watchspring right against the butterfly's face, to protect it. When in use, it is extended with muscles to probe the nectaries of flowers or other substances. When outstretched in this manner, the proboscis behaves like a drinking straw through which the butterfly draws fluids up and into its body. Commonly 1 to 2 cm long in butterflies, the proboscis can be as long as 30cm(!) in certain Hawkmoths. Indeed, the proboscis of certain species of Hesperiidae (Skippers) are typically longer than the body of the butterfly, sometimes twice as long. 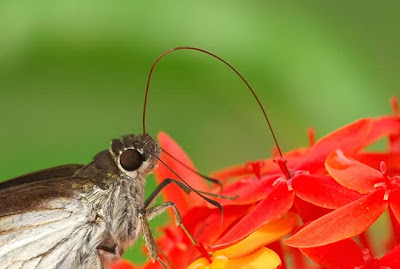 The proboscis of this Hoary Palmer is more than twice as long as its body!

The proboscis appears to be protected by the butterfly's labial palp. The two palpi line up along the butterfly's face, between which the proboscis lie. In certain species' case, the palpi are so hairy as to give the butterfly an appearance of an unshaven face.
When a butterfly finds a potential food source, it unfurls its proboscis and uses its forked tip to investigate the fluids. The proboscis is therefore a very useful tool and particularly well-adapted for the butterfly to reaching deep into flowers for nectar. In the process of feeding on the flowers' nectar, butterflies also transport the pollen from the stamens of a flower to other flowers as the butterfly moves around to feed, thereby helping in the process of pollination. Indeed, butterflies are also one of the agents of pollination and contribute to the propagation of many of the plant species on which the butterflies feed on the flowers. 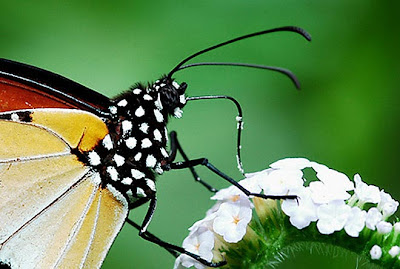 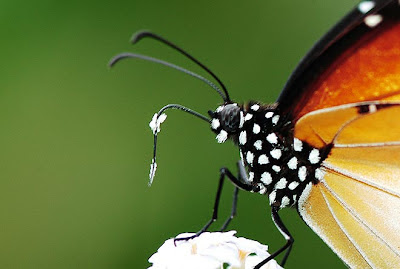 The proboscis of the Plain Tiger is covered with pollen from the flower, all ready to be transferred to the next flower for pollination, as it goes about feeding on nectar.

The proboscis is also used when the butterflies puddle (the act of feeding on damp footpaths or river banks) where they imbibe dissolved salts and other minerals from the fluids on the ground. The proboscis is similarly used when the butterfly feeds on tree sap, rotting fruit, bird droppings and a whole spectrum of dissolved minerals from these sources that the butterfly requires for sustenance, fertility and energy to go about its daily activities. 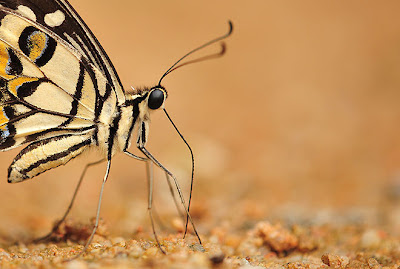 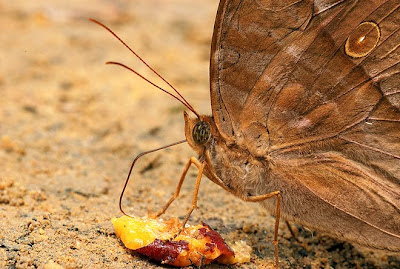 A display of multi-coloured proboscis as these butterflies feed on rotting fig fruits on the forest floor.