Butterfly of the Month - January 2021 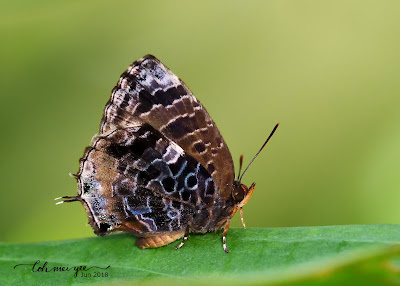 This is the first blogpost of the year, continuing the Butterfly of the Month series that started way back in December 2007. As mentioned in my previous post in 2020, the long-standing weekly posts will cease, as this blog will take on a slower pace from this year on, with a minimum of one blogpost a month, and depending on any interesting subjects or news to share, there may be additional posts from time to time. 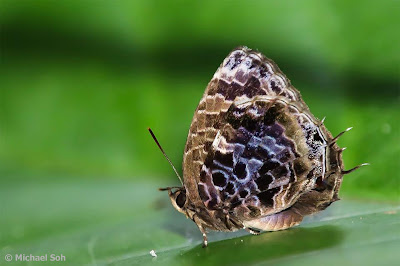 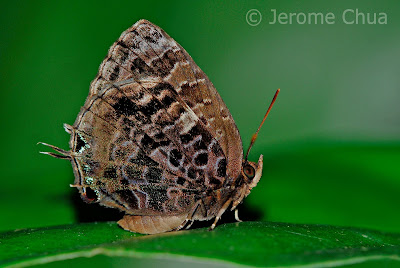 One of the most tumultuous years in history has passed in 2020. But the COVID-19 pandemic is far from over. Many countries all over the world have seen repeated resurgence of infections with multiple waves of the virus attacks coming again and again. The mutation of the virus, yielding even more infectious strains, have started to appear in countries where the virus continues to spread uncontained. 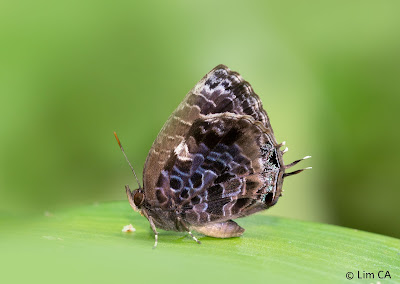 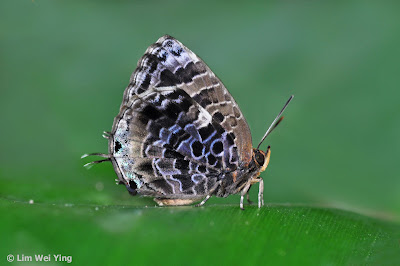 The elections in the US is now over, and the world has seen some really unprecedented un-American things that have happened in the last few months of 2020. Everything that the US criticised about other nations, from "rigged" elections to violent protests and shooting their own citizens happened in the US. And in no less a place than the Capitol in Washington DC, the seat of power. It capped a very strange year, and the pandemic was not the only event that was unprecedented in modern history. 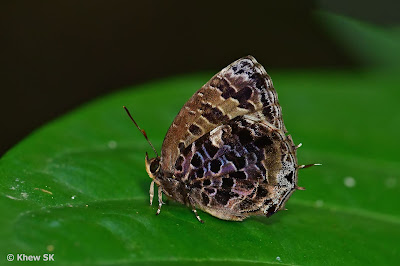 But whatever that was, the world welcomes the 46th President of the US in Joe Biden. How the world order will change, will have to play out in 2021, and everyone hopes that it will be back to normal relations amongst nations, working towards world peace and prosperity. The return of the US to the Paris Climate Change accord within a few hours of the new President taking office is good news for the environment. And it is hoped that new initiatives will be taken to combat climate change and slow down the degradation of the environment in many ways. 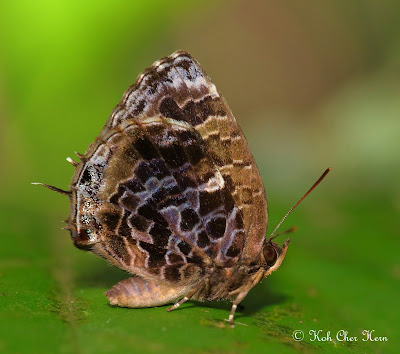 Back in Singapore, the vaccination programme has commenced, with healthcare staff, frontliners and senior citizens given the priority of the Pfizer-Biontec vaccine. The government intends to vaccinate the entire population to create herd immunity to contain the virus and despite continued concerns, risks and misinformation flying around social media, that goal is something to strive for as the year wears on. 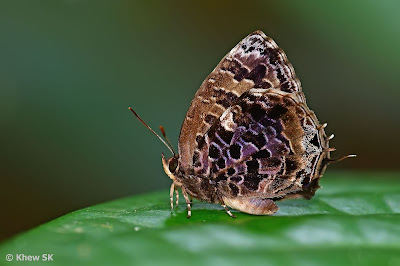 Our first Butterfly of the Month for 2021 is the Aberrant Oakblue (Arhopala abseus abseus). This relatively small butterfly prefers shaded forest understory, but is quite widespread in distribution across the island, from coastal forests to nature parks and reserves. The Aberrant Oakblue displays the same habits as the other species in the Arhopala genus - it lurks in heavily shaded areas and stops with its wings folded upright. 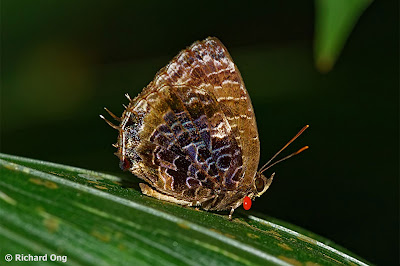 An Aberrant Oakblue with a red mite attached to its thorax 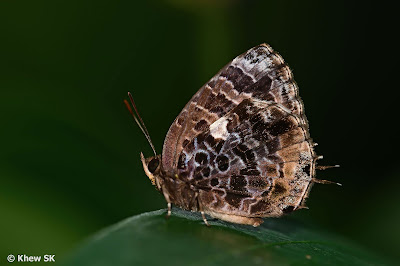 The Aberrant Oakblue is one of the smallest of the genus, and has rather distinctive markings that usually sets it apart from the other species amongst the Arhopala. There have been research findings that place this species under the genus Flos instead of Arhopala and it will be a matter of time before these findings are confirmed and accepted one way or the other. For the time being, I have retained the species under Arhopala until the experts accept it in their widely-accepted literature and publications. 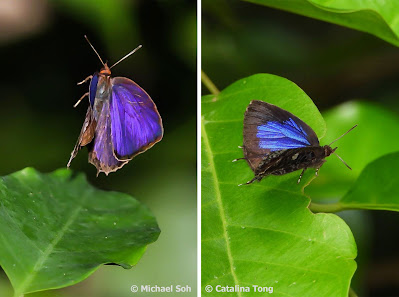 Aberrant Oakblue upperside - Left : Male  Right : Female
The male is a deep lustrous purple with black borders of about 3-4mm thick, whilst the female is shining purple-blue with much broader black borders. The underside is dark brown, with a series of cryptic markings in grey, black and brown giving it a distinctive appearance. Pristine specimens carry a strong purplish sheen in the discal area on the hindwing and white shadings in the forewing's apical and subapical areas. 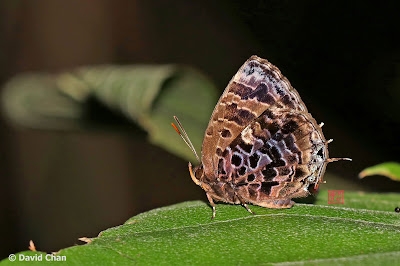 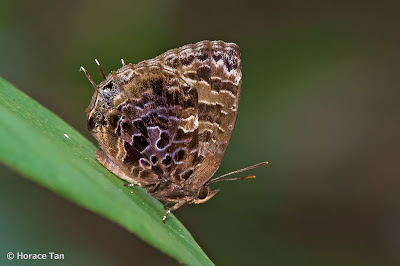 The hindwing has 3 tails of which the one at vein 3 is the longest. Most specimens feature a moderately large white spot at the mid-costal margin of the hindwing. The compound eyes are dark yellow brown. The antennae are orange-tipped. 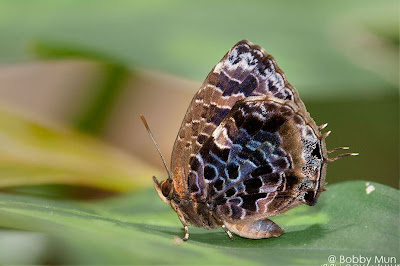 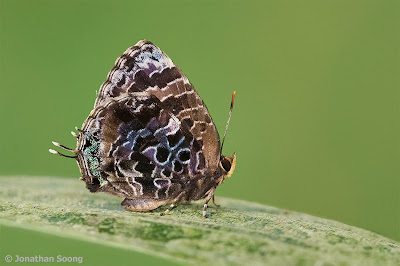 The Aberrant Oakblue has been successfully bred on Hopea pachycarpa and H. odorata in Singapore. Both plants are from the Dipterocarpaceae family, members of which are commonly utilized by butterfly species in the Arhopala and Flos genera. There are two other yet-to-be identified host plants in the local catchment reserves, both of which are likely to belong to this plant families as well. The early stages of the Aberrant Oakblue feed on the young tender leaves of the host plants, and often lives in the company of attending ants.