Butterfly of the Month - December 2007 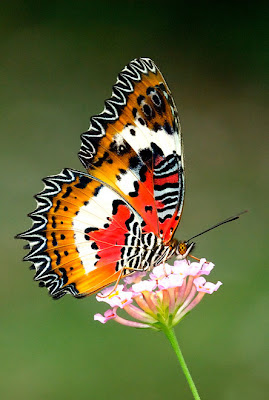 This is a new monthly series where a butterfly species is featured as the Butterfly of the Month. To start the series, I have chosen the Malay Lacewing, a favourite amongst butterfly enthusiasts and photographers.

The Malay Lacewing (Cethosia hypsea hypsina) belongs to the genus Cethosia, which includes some of the most beautiful butterflies in the region. The upperside of the wings of both the male and female of this species feature a bright orange-red colour with black borders. The outer margins of both wings are serrated, particularly more so on the hindwings, giving the wings a saw-toothed appearance. The intricate 'lace' patterns on the undersides of the wings are likely to have given rise to the origin of its English common name, Lacewing.

The Malay Lacewing is described as the commonest species of the genus in Malaysia and Singapore. It is characterised by the pale yellow subapical border on the forewing above. Males tend to fly more energetically than the females. It is essentially a forest butterfly, preferring to stay within the confines of the nature reserves in Singapore, and the forested areas. The Malay Lacewing can often be observed at the flowers of Leea indica, Snakeweed (Stachytarpeta indica), Mile-a-Minute (Mikania cordata), Ixora spp. and Lantana camara. It is always a joy to watch this pretty butterfly flutter amongst the flowering bushes, searching for its favourite nectaring source to feed upon, and flying nonchalantly in a spectacular display of its bright cheerful colours. 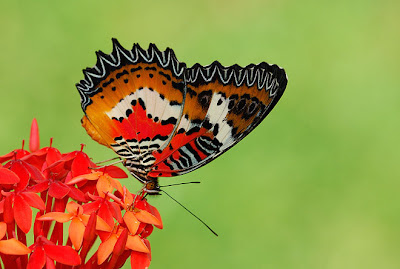 A Malay Lacewing feeding on the nectar from the flowers of Ixora javanica. 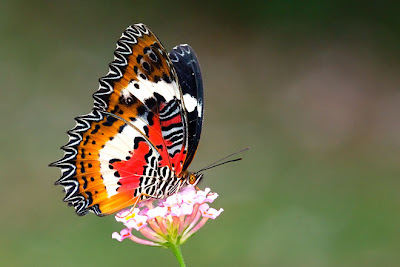 With its wings slightly opened, this Malay Lacewing balances on the flower of a pink Lantana camara as it sucks nectar.

Females of the Malay Lacewing have a yellowish-white dorsal patch on the forewings above, which is absent in the males. The females also appear a paler orange-red whereas the males sport a darker shade of orange-red on the wings above.

Left : Male Malay Lacewing Right : Female Malay Lacewing. Note the extra yellowish white triangular patch on the dorsum of the forewings of the female.
The wine-red caterpillars of this species are known to feed on Passifloraceae. The species is distateful to predators.
Text and Photos by Khew SK
Posted by Commander at 8:51 PM 3 comments