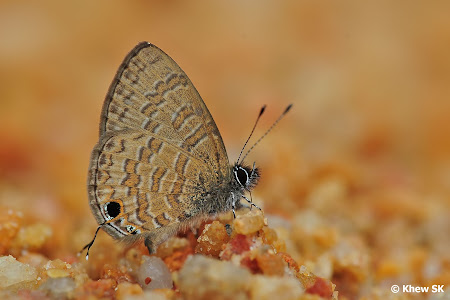 A male Common Line Blue puddling at a sandy streambank


The "Line Blue" butterflies are a group of rather small species that belong to the subfamily Polyommatinae of the family Lycaenidae. The Polyommatinae are often referred to as the "Blues". A large number of the species in this subfamily are small and delicate butterflies with many of them sporting thin filamentous white-tipped tails on their hindwings. Many species, particularly the males, have blue uppersides, hence the English common name for the group. 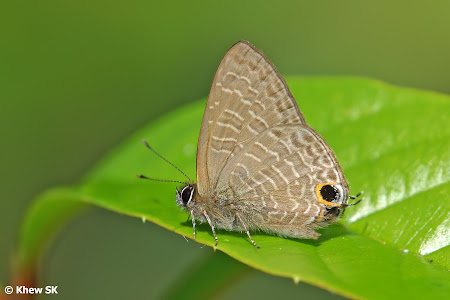 A Pointed Line Blue perched on top of a leaf


This blogpost introduces the seven extant species found in Singapore that carry the English common name "Line Blue" in their names. All these species feature a series of striations across the undersides of both the fore- and hindwings. They have the typical "eyespot" at the tornal area of the hindwing and, in some of the species, coupled with the thin tails, form a decoy to fool predators into attacking a less critical part of their wings. 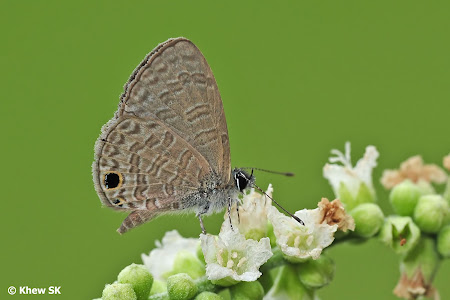 A Tailless Line Blue feeding on the flower of the Stringbush


In this article, we introduce three of the seven species that are found in Singapore. Ironically, of these "Line Blues" found in Singapore, four are new discoveries. Based on reference literature, these four were not recorded in Singapore by the early authors. We will feature these four "exotics" in Part 2 of the article next weekend. We will now highlight the three native, and relatively common species in Singapore. 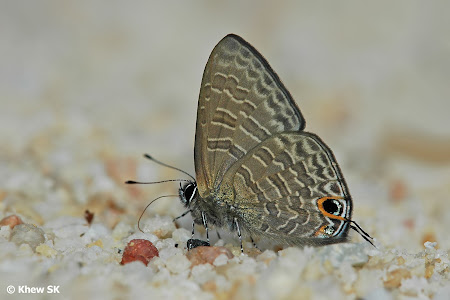 
The Pointed Line Blue is the sole representative of the genus Ionolyce in the region. It is relatively common and widespread in distribution across the island. It can be found in urban parks and gardens, and sometimes in the forested nature reserves as well. Males are regularly found puddling at damp streambanks and muddy footpaths, and are partial to human perspiration as well. 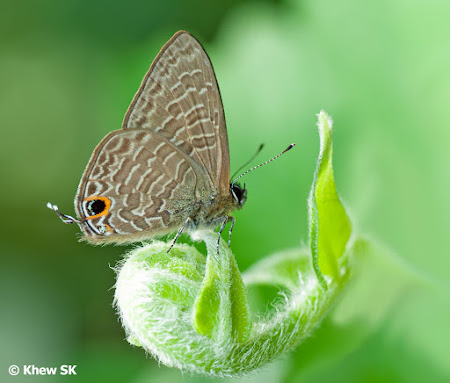 It is a fast flyer, and flies erratically, and is often skittish, until it comes down to puddle on the forest floor. Once it is a feeding mood, it can also be coaxed to feed on a sweaty finger. The forewings of the males are more pronounced and pointed than other lookalike species in the subfamily. 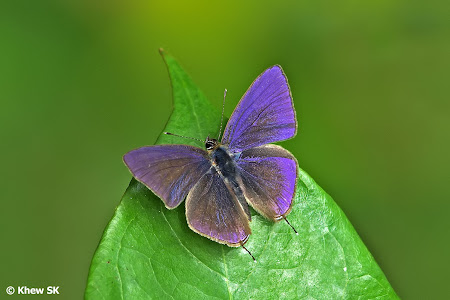 A male Pointed Line Blue opens its wings to sunbathe


The male Pointed Line Blue is a deep purple-blue on top, with a very thin black margin and unmarked. The female is predominantly brown on her uppersides with the discal areas and wing bases overlaid with bluish-purple. The undersides are dull greyish-brown with narrow whitish wavy lines across both wings. There is an orange-crowned eye spot at the tornal area of the hindwing and a black filamentous tail which is tipped with white at vein 2 of the hindwing. 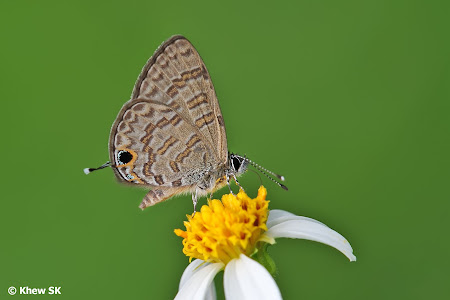 A Common Line Blue feeding on the Spanish Needle flower


The Common Line Blue is a small butterfly that has a wingspan of around 25-28mm and considered moderately common. It can be found in urban parks and gardens but can also be found in the forested nature reserves. Males of the Common Line Blue are attracted to damp footpaths and streambanks where they come down to puddle for salts. 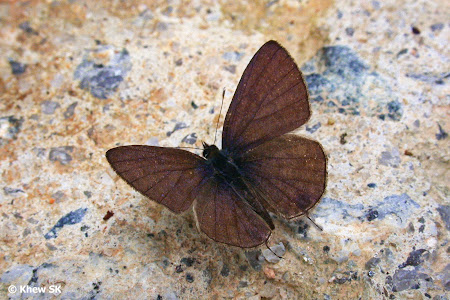 A male Common Line Blue puddling with its wings opened 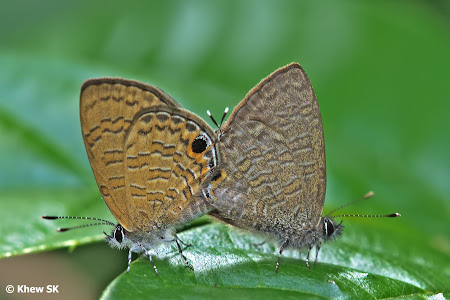 
The underside features white-edged dark lines across both wings with the interstitial spaces orange in the males, and grey with orange speckles in the female. There is a large orange crowned black eyespot at the tornal area of the hindwing below, with iridescent greenish scales. At vein 2 of the hindwing is a filamentous white-tipped tail. 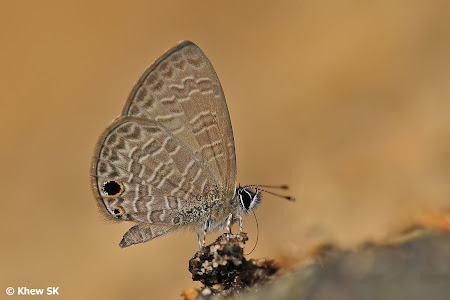 
The Tailless Line Blue is a closely related species from the same genus as the Common Line Blue. But as its name suggests, there is no tail on the hindwing of this species. It is common, and sometimes seasonally abundant where two dozen individuals or even more, can be observed, frolicking amongst the shrubbery. 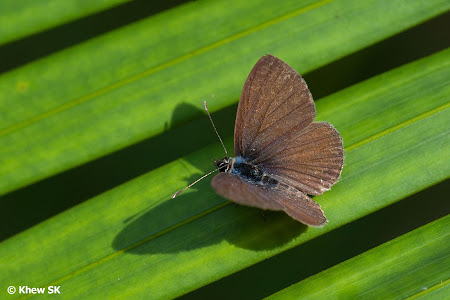 A male Tailless Line Blue opens its wings to sunbathe


The male Tailless Line Blue is bluish-purple on top with an almost imperceptible border. The female is brown on the uppersides with a blue discal patch. The underside is greyish, with the usual white-edged dark lines across both wings. There is a large tornal spot on the underside of the hindwing with some iridescent pale green scales. 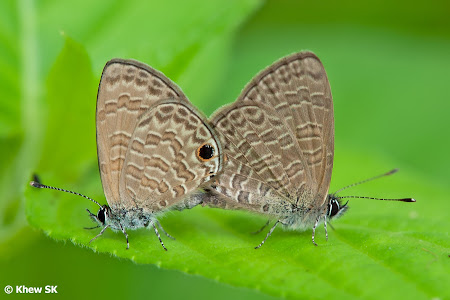 
Males are sometimes found puddling at damp footpaths, drains and wet areas. Females are more often found at flowering plants like the Stringbush. The species is widely distributed and is common throughout Singapore in urban parks and gardens.


Text and Photos by Khew SK