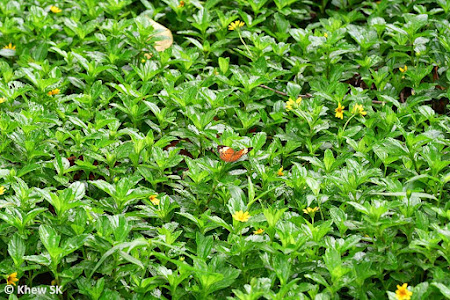 
Our 8th instalment of Butterflies' Favourite nectaring plants features another invasive "weed" that is common in disturbed or cleared sites in Singapore. It is used by landscape designers and gardeners as a ground cover or a 'filler' plant in cultivated gardens. The pretty yellow flowers that dot a mat of deep green ground cover give a certain amount of aesthetic appeal in garden settings. 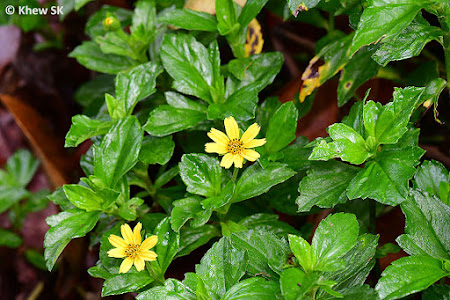 The plant has a number of English common names, but is often referred to as the "Singapore Daisy". That the name "Singapore" is associated with an invasive plant and often unwelcomed weed is indeed curious! This is especially more so, when the plant is not even a native of Singapore nor Southeast Asia, but originated from tropical America, Mexico and the Caribbean! 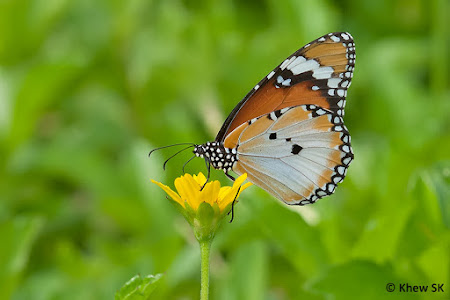 Sphagneticola trilobata is listed in the IUCN's “List of the world's 100 worst invasive species”. In Queensland, Australia, for example, the Singapore Daisy is a restricted invasive plant under the Biosecurity Act 2014. It must not be given away, sold, or released into the environment without a permit. It is widespread as an invasive species on the Pacific Islands, Hong Kong, South Africa, Australia, Indonesia, and Sri Lanka. 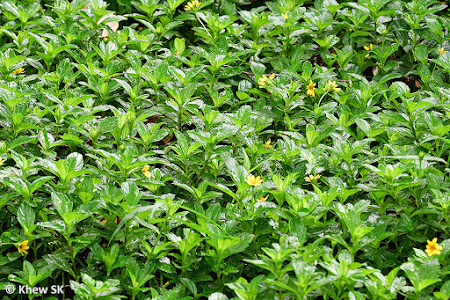 The Singapore Daisy is a perennial herb with a creeping, scrambling or climbing habit, growing up to 30 cm tall and 4 m long. This mat-forming plant is often cultivated as an ornamental dense ground cover. It may also climb a short distance up trees or over other vegetation and is known to crowd out and displace other species of plants in its way. 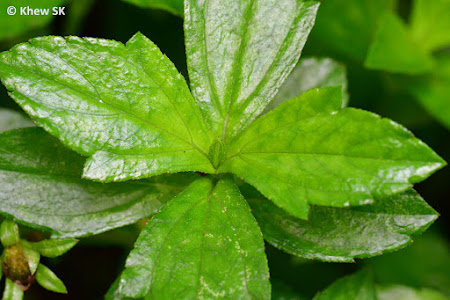 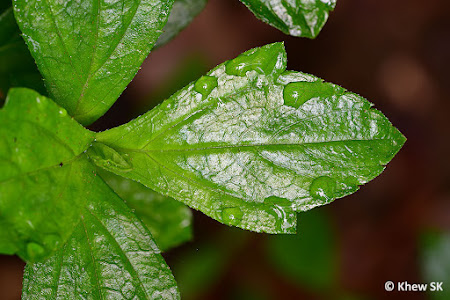 The three-lobed leaves of the Singapore Daisy


The leaves are simple, opposite, sessile or borne on very short petioles, slightly fleshy, mostly hairless, glossy, 4-9 cm long and 2-5 cm wide. The species name trilobata - three-lobed, referring to the 3-lobed lamina with irregularly toothed margins . Colour of the leaves is dark green above, paler below. 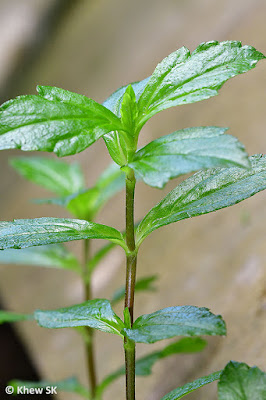 The stems of the Singapore Daisy are rounded, solid, green or pinkish-red and are somewhat hairy to almost hairless. They grow up to 4 m long and regularly develop adventitious roots at their joints. Short, semi-upright flowering branches are produced off these creeping stems. 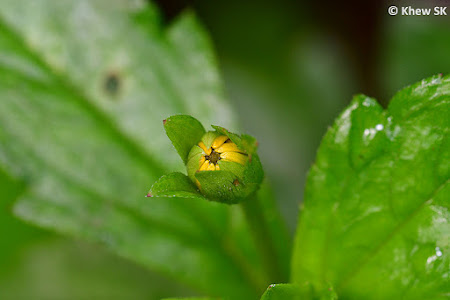 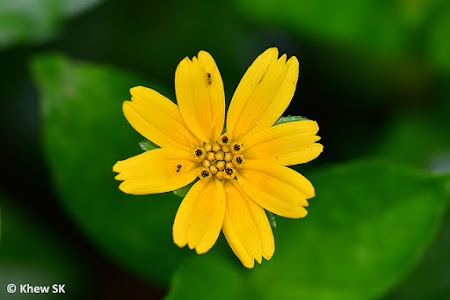 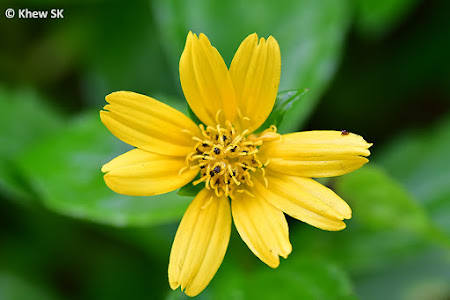 
The yellow-orange flower-heads are about 3-4 cm across, and are axillary and terminal, borne singly on an erect stalk ranging from 3-11 cm long. They are composed of 8-13 yellowish petals that are 6-15 mm long with finely toothed tips. In the centre of these flower-heads, there are numerous tiny yellow tubular florets 4-5 mm long. The base of each flower-head is enclosed in a row of narrow green bracts of about 1 cm long. 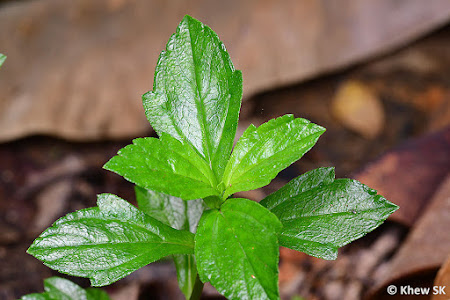 The fruit is a brown, elongated achene, 3-5 mm long, topped with a crown of short irregular scales. However, viable seeds are rarely produced. The Singapore Daisy reproduces vegetatively by stem fragments. Where the stem nodes touch nutrients, whitish roots will sprout and these will easily grow and spread horizontally across the substrate. It is easily propagated by stem cuttings and stolons. 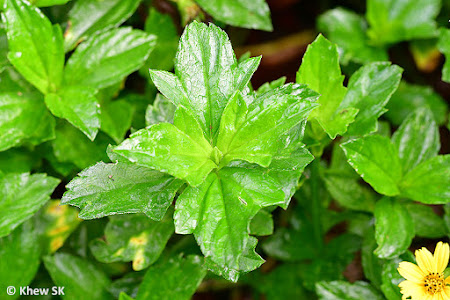 The Singapore Daisy has a very wide ecological tolerance range and does equally well in both dry and moist sites. Although it prefers full sun, it can also survive well in shady conditions. It is very adaptable to wide range of soil types, including nutrient-poor sand, saline soils, swampy or waterlogged areas, and even bare limestone. It is tolerant of dry periods and periodic innundation as well as high levels of salinity. Its fast growth may smother nearby groundcovers, so the plant should be pruned back regularly. 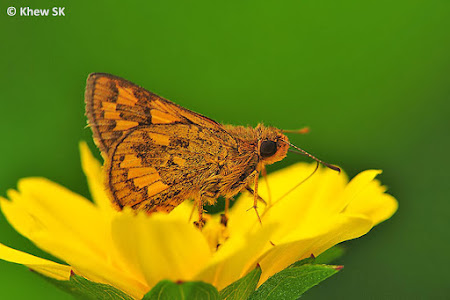 The plant is also known for several traditional medicinal uses. It is used for hepatitis, indigestion due to sluggish liver, white stools, burning in the urine / stopping of urine, and for infections. A concoction of the plant is used to bathe those suffering from backache, muscle cramps, rheumatism, or swellings, by boiling the fresh stems and leaves in 2 gallons of water for 10 minutes. For painful joints of arthritis, the fresh leaves and stems are mashed and the paste spread on a cloth and applied to area, wrapped securely with a warm covering. The plant extract is also used to clear the placenta after birth. 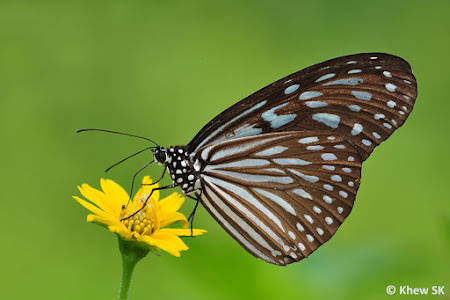 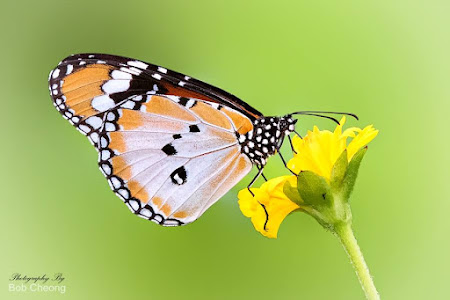 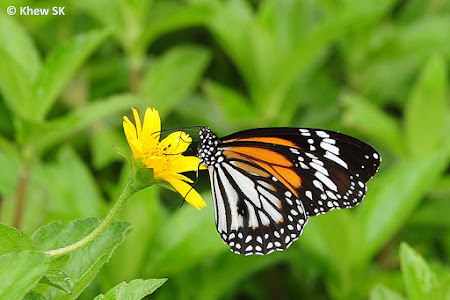 Amongst the larger butterflies, I have rarely seen the Papilionidae (Swallowtails and Birdwings) feeding on the flowers of the Singapore Daisy locally. Perhaps the physical attributes of the yellow flowers do not lend themselves well to the thicker and longer proboscis of the Papilionidae? The Danainae, however, do not have any problems with these flowers and they have been often photographed feeding on the flower of the Singapore Daisy. 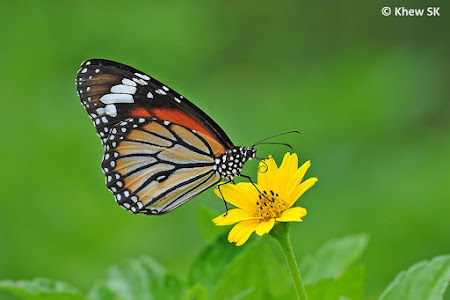 Amongst the Danainae, the Plain Tiger, Common Tiger, Black Veined Tiger, Blue Glassy Tiger have all been seen feeding on the flowers of the Singapore Daisy. However, the flowers of the plant are usually at low level and in open areas, the the butterflies tend to be quite skittish and alert. Unlike other nectaring plants' flowers, the Singapore Daisy is a low creeper and perhaps the flowers tend to leave the feeding butterflies more "exposed" and hence more alert to potential predators swooping down on them as they feed. 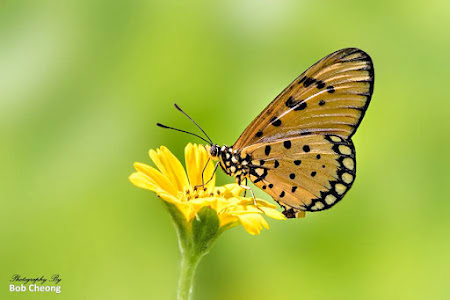 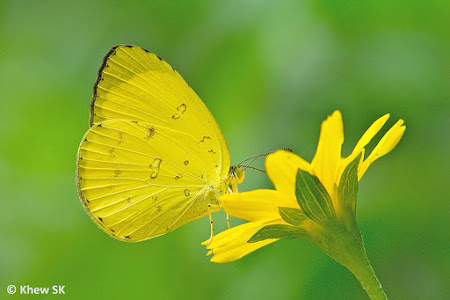 Amongst the other species in the Nymphalidae subfamily, I have observed the Blue Pansy, Chocolate Pansy, Peacock Pansy and Great Eggfly visiting the flowers of the Singapore Daisy. The Tawny Coster stops to feed on the flowers of the plant, but not as often as compared to other favourite nectaring plants like the Snakeweed and Spanish Needle flowers. Amongst the Pieridae, I have observed some Grass Yellows (Eurema spp) feeding on the flower. 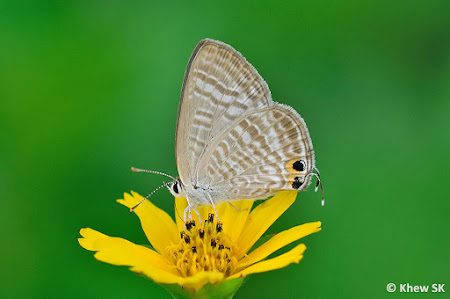 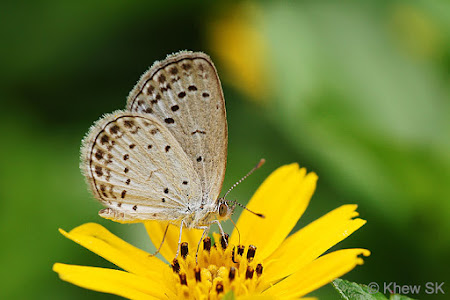 Lycaenidae feeding on the yellow flower of the Singapore Daisy


There are probably more Lycaenidae that feeds on the Singapore Daisy flowers than have been observed and photographed. Some examples are the Pea Blue, Pale Grass Blue, Silver Forget-Me-Not and Cycad Blue, just to name a few. Again, these butterflies tend to choose other nectaring plants where available, and they only feed on the Singapore Daisy flowers when their other preferred nectaring sources are unavailable. 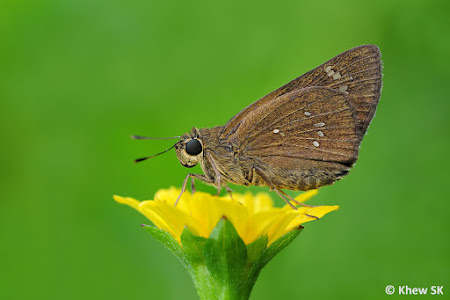 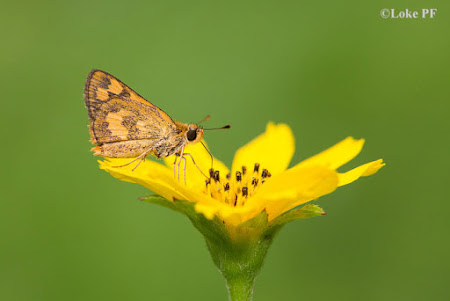 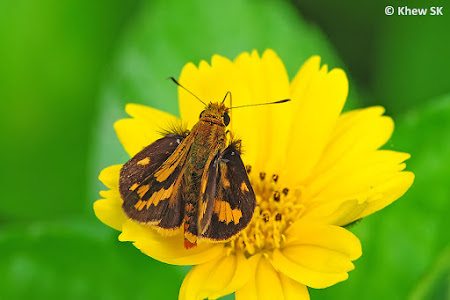 Skippers on the yellow flower of the Singapore Daisy


The Hesperiidae (Skippers) are also seen on the Singapore Daisy flowers, particularly in the early morning hours. Amongst the Skippers, the Lesser Dart, Yellow Grass Dart, Contiguous Swift, Conjoined Swift and Paintbrush Swift have been seen feeding on the flower of the plant. 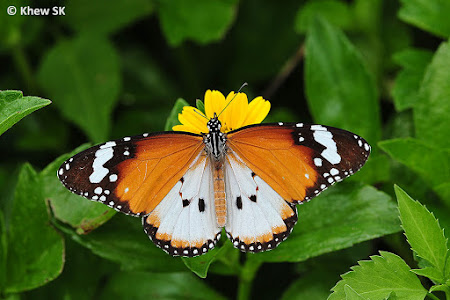 As a nectaring plant, the Singapore Daisy can be considered reasonably attractive to certain species of butterflies. However it is not universally a preferred source of nectar for butterflies, even though there are enough photos as evidence that butterflies do feed on the flowers of the plant. As part of the landscaping horticultural palette of plants that make up a butterfly garden, the Singapore Daisy also plays its part to attract butterflies to our butterfly-friendly environments in Singapore.

Posted by Commander at 6:01 PM 0 comments