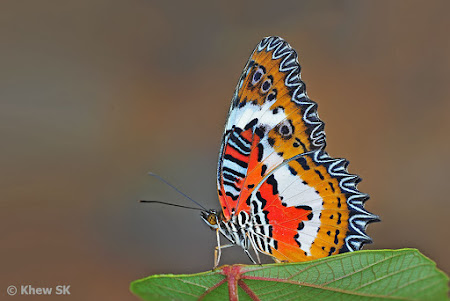 In this final weekend article for the month of November 2018, we discuss some common anatomical terms that we often come across in the description of butterflies. This short list is accompanied by photos of butterflies and highlights the areas that are described by these anatomical names for different parts of the butterflies that were not dealt with in the earlier articles in this series. 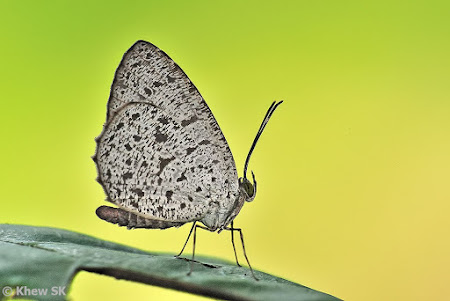 Doing an online search for glossaries of anatomical names of butterflies should yield many comprehensive lists that a serious student would find more complete. This article features 10 commonly used terms that are found in books, scientific papers and online articles used to aid in the description of the physical morphology of butterflies and in many cases, to highlight distinguishing features to separate the IDs of different species. 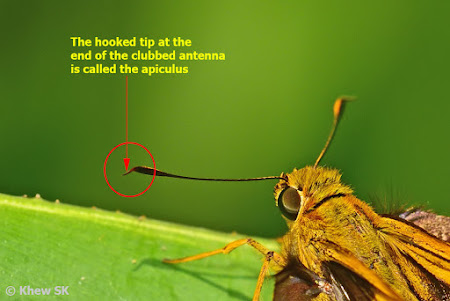 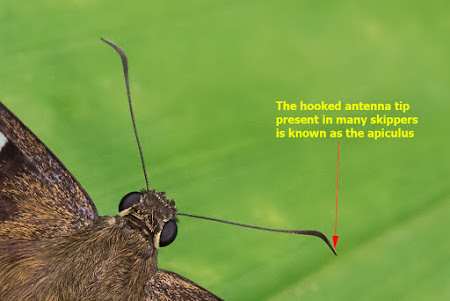 The is the tapering apical portion of the antennal club of Hesperiidae species (Skippers). The apiculus or "hook" at the end of the antenna is unique to the Hesperiidae family and is not present in the other butterfly families found in Singapore. However, it should be noted that in some genera of the Hesperiidae, like the Taractrocera spp. this apiculus is missing. 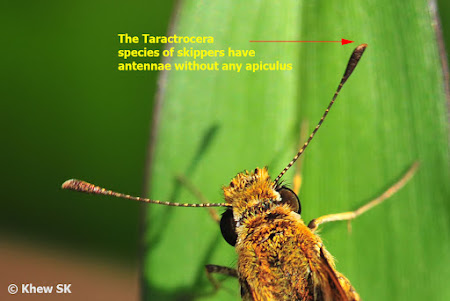 It should be noted that the apiculus is not exclusive to butterflies' anatomy, and from definitions on online dictionaries, the word is applied to the pointed ends of a range of other organisms and plants, e.g. part of a spore or a small point formed by the projection of the midrib beyond its leaf. 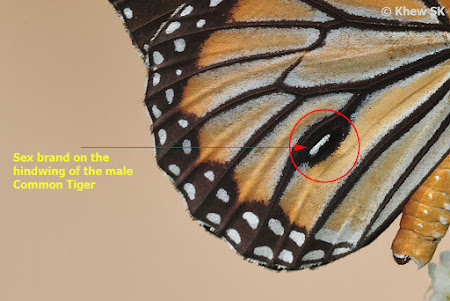 The brand in butterfly anatomical terminology usually refers to a secondary sexual characteristic, usually found in male butterflies. The brand in butterflies is a patch of specialised androconial scales of the male forewing that helps disperse pheromones (used to attract females) emitted from tiny organs on the wings. 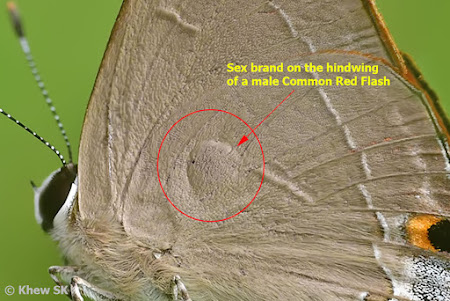 Examples of these sex brands are the distinguishing features on the hindwing of the Common Tiger (Danaus genutia genutia), the circular disc that can be seen on the underside of the Common Red Flash (Rapala iarbus iarbus) and a line in the forewing of the Small Branded Swift (Pelopidas mathias mathias). 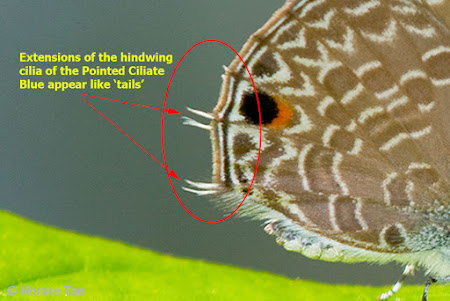 In butterflies, the cilia refers to the short fine hairs which form the fringe along the wing termens (or margins). For some species of butterflies, the colour of the cilia are diagnostic features that help to ascertain the ID of the species. In others, for example in the Anthene spp, extensions of the hindwing cilia appear as short fine tails. 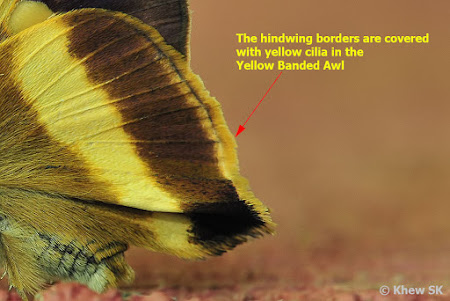 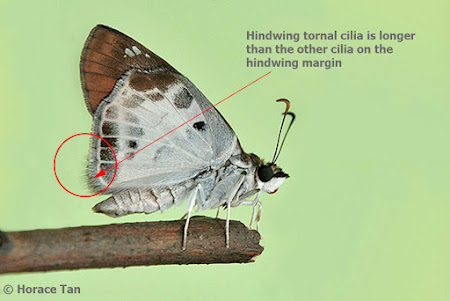 Reading the descriptions that describe the appearance of some examples are "On the hindwing, there is a broad yellowish discal band and the wing borders are marked with yellowish cilia" is best illustrated in the Yellow Banded Awl (Hasora schoenherr chuza). Or another example like the Chestnut Angle (Odontoptilum angulatum angulatum) whose description reads "Hindwing has elongated tornal cilia" meaning that the hairs on the tornal area of the hindwing is longer than the other cilia on the hindwing. 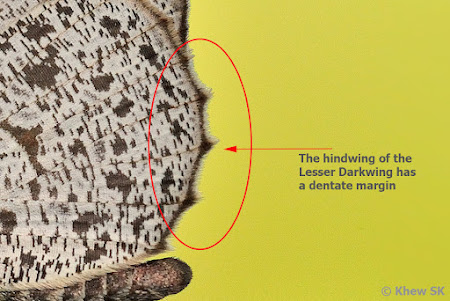 The term dentate is used to refer to something as "having teeth or toothlike projections; toothed or notched". E.g. in botany, the term is often used to describe the edges of a leaf as "having a toothed margin". An example of a butterfly's wings featuring a dentate hindwing margin is the Lesser Darkwing (Allotinus unicolor unicolor). 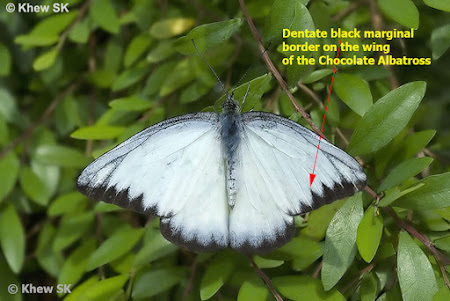 In another example, the description of having a dentate border but where the toothed edge is internal, is the Chocolate Albatross (Appias lyncida vasava), which is often described as having white uppersides with dentate black marginal borders on the fore and hind wings." 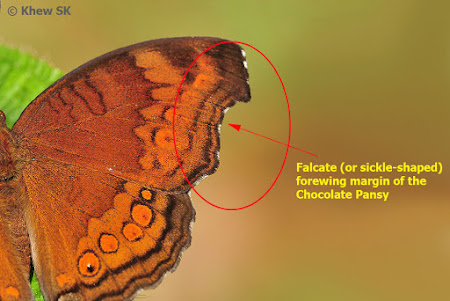 The definition of the word falcate often refers to sickle-shaped or curved edge. In butterflies, the description is often used to describe the edge of the forewing of some species that feature usually pronounced curved termens. Examples of such species are the Chocolate Pansy (Junonia hedonia ida) which has "a falcate forewing". 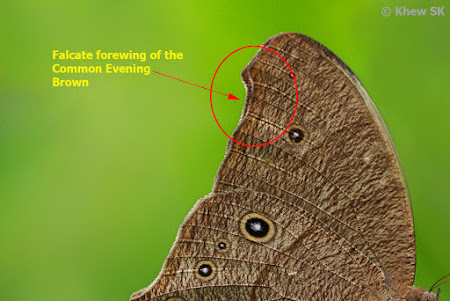 Another example of a falcate-winged butterfly would be the Common Evening Brown (Melanitis leda leda) whose forewing is prominently curved or sickle-shaped at the outer margin or termen.

The descriptor hyaline is defined as "having a glassy, translucent appearance." This anatomical term is often found in the description of the spots in Hesperiidae species (Skippers). These spots, when viewed in a backlight, show that they are translucent as opposed to opaque spots which do not allow the light to shine through. 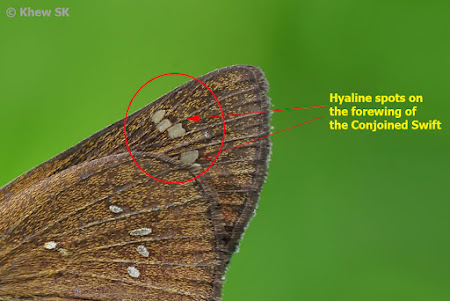 An example of a skipper's description is the Conjoined Swift (Pelopidas conjunctus conjunctus) which features "pale yellowish-white hyaline spots in spaces 2-4, 6-8 and two cell spots in the forewing." 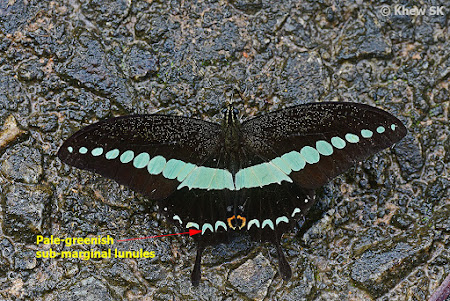 Lunules refers to anything crescent-shaped; a crescent-shaped part or mark; a lunula or lune. The etymology is borrowed from the French word lunule which has its origins in the word luna or moon. In butterflies, the anatomical term lunule is often used to describe crescent-shaped spots or markings on the wings of various species. These markings can sometimes be clearly crescent-shaped, or in some cases, vaguely alluding to the curved shaped marking, that may not be so distinct. 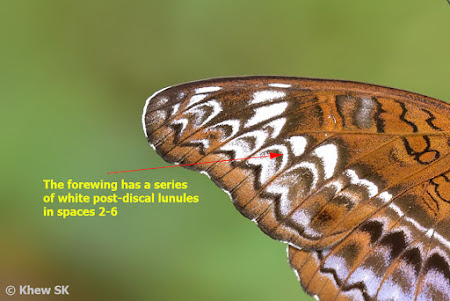 An obvious example is the Banded Swallowtail (Papilio demolion demolion) which features a series of pale-greenish sub-marginal lunules on the hindwing. The Knight (Lebadea martha parkeri) is also another species that is described as "the forewing has a series of white post-discal lunules in spaces 2-6, lying on the outer margin of the white discal band." 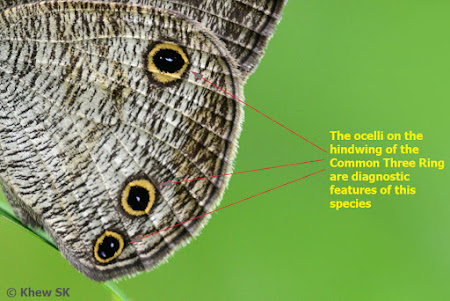 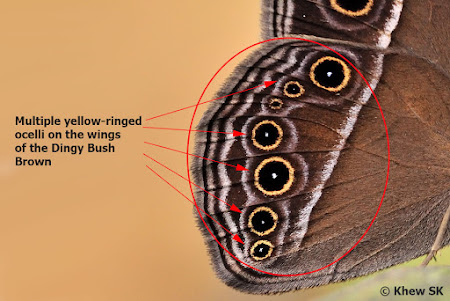 The ocelli (if singular, ocellus), are the eye-like spots on the wings of butterflies. Sometimes they are simply referred to as "eye-spots" to describe these (usually) circular markings on the wings of many species. Ocelli are often used as diagnostic markings to separate lookalike species e.g. in the Mycalesis and Ypthima species. 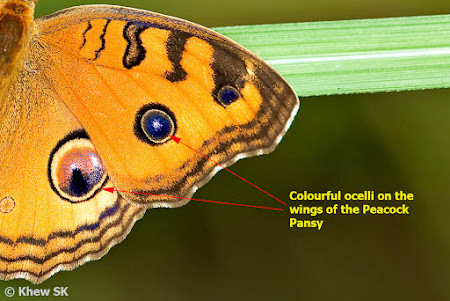 Many of the larger Satyridae species feature interesting ocelli on their wings. In some Nymphalidae species, like the Junonia spp, these eyespots are believed to form part of their decoy defense markings to make them appear larger or more threatening than they really are. 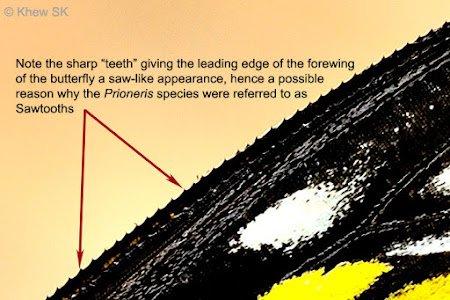 To have a serrated edge means to be "notched on the edge like a saw". The word serrate originates from Latin serrātus, equivalent to serr(a) saw. A similar analogy would be an edge or markings that look like a set of sharp teeth. 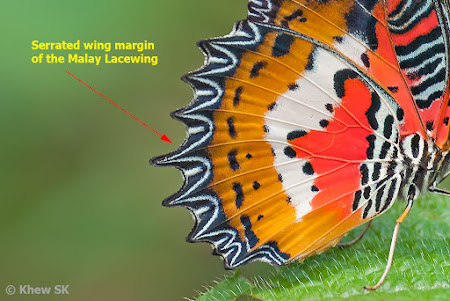 Examples of serrated markings or serrated wing margins are in the descriptions for the Cethosia spp. like the Malay Lacewing (Cethosia hypsea hypsina) where the "outer margins of both wings are serrated, particularly more so on the hindwings, giving the wings a saw-toothed appearance." 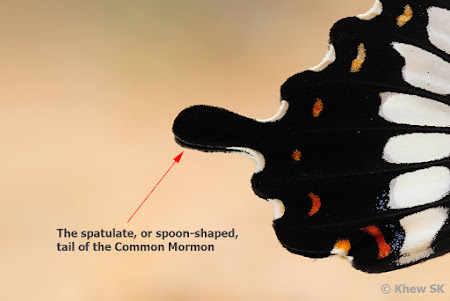 The term spatulate means having a "broad rounded end", like a spoon or a spatula. In butterflies, this usually refers to a tail in the Papilionidae species. Descriptions like "has a spatulate tail at vein 4 of the hindwing" highlights the spoon-shaped tail at the hindwing of the butterfly. 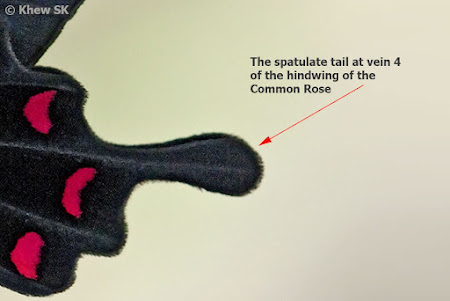 Some examples of butterfly species having spatulate tails are the Common Mormon (Papilio polytes romulus), Common Rose (Pachliopta aristolochiae asteris) and Great Helen (Papilio iswara iswara). Note the broad rounded spoon-shaped tails on the hindwing that are characteristic amongst these large swallowtail species. 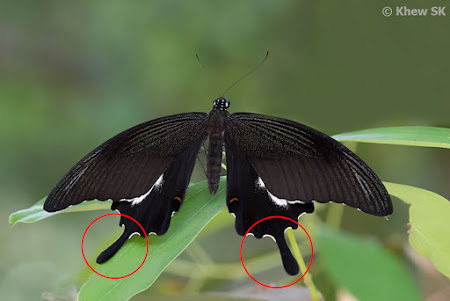 The spatulate tails of a Great Helen at rest

This sums up the series on anatomical terms for butterflies and it is hoped that this series of articles will help butterfly hobbyists can better understand some of these descriptions when they read these terms in future.

Text by Khew SK : Photos by Khew SK and Horace Tan.
Posted by Commander at 10:07 PM