Of Prostitutes, Gigolos & a Busy Brothel!

Of Prostitutes, Gigolos & a Busy Brothel!
Featuring the Courtesan 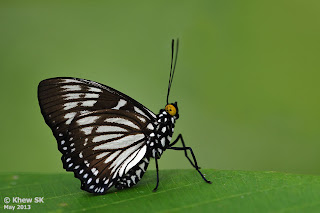 Just in case you did a double take and wondered if you are reading an article about butterflies or had inadvertently stumbled on some undesirable website, rest assured that you are in the right place. (Unless of course, it was your intention in the first instance to visit some dubious website for a little RnR!) But now that your curiosity has been piqued by the strange title of this article, do read on... 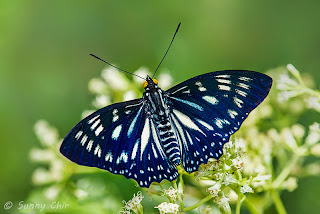 This weekend's blog article revolves primarily around a species of butterfly that has been christened the rather unfortunate common name of "Courtesan". A quick search across various online dictionaries would give you the definition that clearly refers you to the world's oldest profession! Wikipedia puts it more diplomatically across, as it traces the historical meanings of courtesan, but stating that in our contemporary era, the word courtesan "has become a euphemism to designate an escort or a prostitute, especially one who attracts wealthy clients." 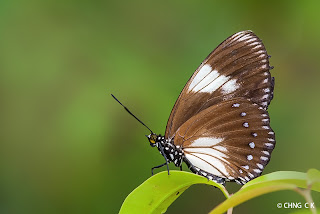 How such a pretty butterfly came to be associated with a lady of the night, we can only guess. Perhaps one of the early collectors saw in the physical appearance of this butterfly, a resemblance with someone or something that reminded him of his previous night's recreational activities? Or perhaps someone was having some morbid fun in coining such a name for this butterfly. Of course the search also suggested that courtesans are normally applicable to women. So what do we call male Courtesans then? 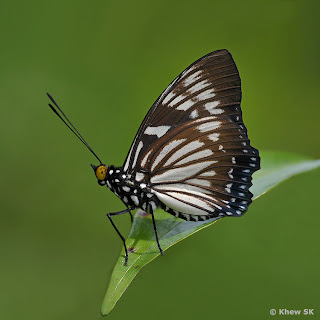 The Courtesan (now I'm referring to the butterfly) is considered a rarity in Singapore. Between infrequent appearances in urban parks and gardens, there were long intervals during which the species was not seen. Over the past few weeks, however, after ButterflyCircle members stumbled on one or two individuals within a very localised area in the nature reserves, the sightings of the Courtesan became more regular and frequent, but still largely within the vicinity where it was first spotted. 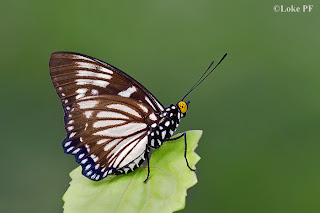 A few weekends later, ButterflyCircle members located the mother lode (or should we say a very active brothel!) where there were more numbers of this species than we have ever encountered before! True that the recorded host plant,Trema tomentosa grows commonly in this area, but the plant can also be found in many places and is certainly not rare. So what makes this place so special? 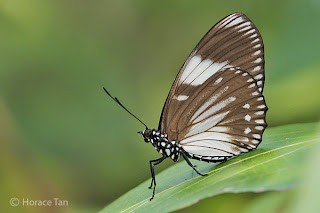 An observation was made that the location where the host plant species was found in abundance, was actually an area that had been affected by tree falls and the heavily shaded forested area was naturally "cleared". The opened patch of forest that was wiped clean was then a subject site for replanting by the authorities, most probably the National Parks Board. Evidence of reforestation with Syzygium and other species of plants in that area was obvious by the support poles that accompanied the young saplings. Other secondary growth species quickly took root, and examples are Melastoma, Trema and a number of the usual creepers and "weeds". 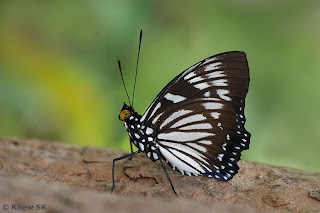 Forest ecology and habitats are dynamic and evolve all the time. In nature, nothing is static. Trees fall, clearings are created, new plants grow, the structure of the forest evolves as new plants colonise the site and edge out other plants, habitats change from open sunny areas to shaded forests as the trees grow tall, and the cycle repeats itself. With change, biodiversity and the species that come and go, will closely follow the evolution of the structure of the forest as one habitat replaces another. Where were the Courtesans before the large trees fell and opened that patch of the forest? Probably nowhere near. What happens when the trees grow, the understorey becomes heavily shaded, and the smaller shrubs die out? The Courtesans will probably move somewhere else where the habitat is conducive for the species to survive. 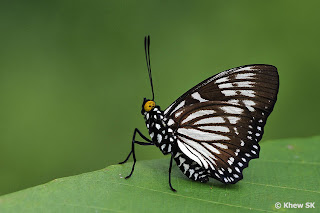 The abundance of the Courtesan's host plant, Trema tomentosa and also another related species, Trema cannabina meant that a small colony of the butterfly could be supported at this patch of forest. Indeed it became so, when we spotted up to nearly a dozen individuals of the species, both males and females, over the period when they were active. Suddenly, a rare butterfly became common, even if it were only temporarily. 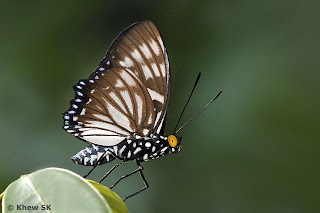 
The males were up and about quite early in the morning, usually perched on higher vantage points, surveying their territory for intruders and also for potential mates that come along. Females tend to fly slowly in search for their host plants to lay their eggs on. 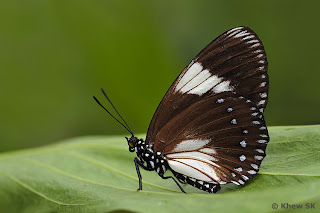 The Courtesan is a classic example of sexual polymorphism in the female, with two forms occuring in Singapore and Malaysia. Indeed over the weeks that they were observed at this forest patch, both the females form-isina and form-eupleoides were present. The females are excellent examples in Batesian mimicry, where they resemble the distasteful Danainae Magpie Crow (Euploea radamanthus radamanthus) for protection against predators. 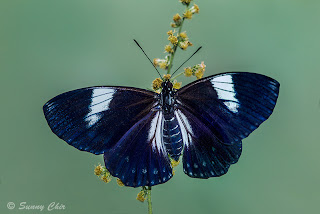 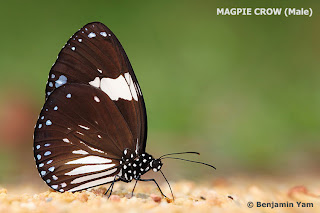 The female form-isina of the Courtesan and the model, the male Magpie Crow for comparison 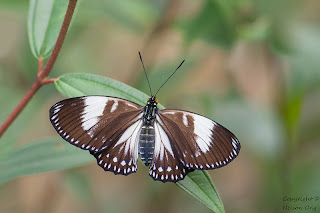 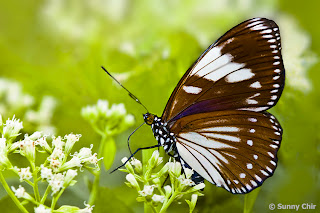 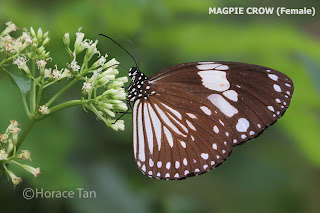 The female form-eupleoides of the Courtesan and the model, the female Magpie Crow for comparison


It was also interesting to note that the eyes of the male Courtesan is always a bright yellow, whilst the eyes of the females can range from dark grey to yellow. Another noteworthy observation would be that the differences between the male and female Courtesan extend to their wing shape, patterns and even size! The typical male is only about 60% of the size of the larger female. 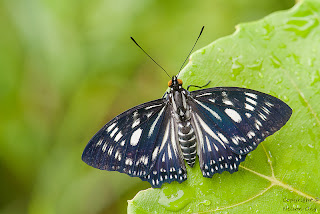 Nature always throws interesting surprises and unexpected discoveries, even on our little island. If not for the access created by the network of park connectors to reach this forested area, these observations may not have been possible, and we would have been none the wiser about the behaviour of the Courtesan in this habitat. Indeed, if not for this fortunate encounter, ButterflyCircle may not have been able to document the full life history of the Courtesan so soon! Horace Tan, our early stages expert, managed to record the life history of the Courtesan on this blog resulting from the first observation of this species in that area. 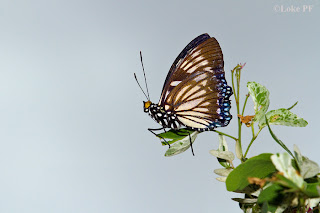 There are certain quarters who advocate that Singapore should leave all its wild greenery alone and not develop them. However, there are benefits in creating nature-related facilities and accessibility to some of these areas so that nature enthusiast groups like ButterflyCircle can continue to study, document and share our natural heritage with the community at large. 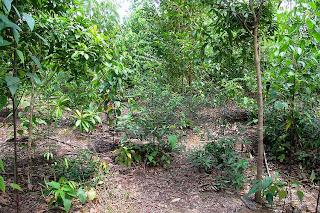 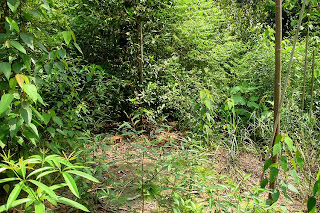 The re-forested clearing where the Courtesans thrive, at least temporarily, as the forest structure evolves and changes over time

No one is saying that we should support the clearing of all our remaining forests and replacing them with steel and concrete buildings. Given our land-scarce island, we have already done a lot better than many other countries around us, in terms of planning the city, and providing a delicate balance between sensitive and sustainable development whilst conserving our greenery and biodiversity. The keyword is balance, and not at the absolute expense of one or the other. 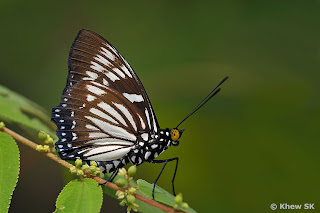 
Whither now our lady of the night? After the re-forested area regenerates itself, and the key plant species are replaced by others naturally as forests evolve, will the Courtesan still remain? Perhaps, perhaps not. Nature is unpredictable. But we are thankful that we have managed to study this species in greater detail than we would otherwise have been able to, given this window of opportunity. And it has certainly been a very educational lesson in nature's outdoor classroom.