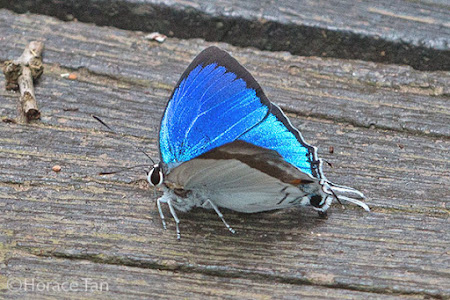 
In this second part of our weekend's feature blogpost, we introduce the rarer species of "Royal" butterflies found in Singapore. In Part 1, we introduced the 4 "Royals" - Peacock, Felder's, Chocolate and White. Those species, though considered moderately uncommon, are more likely to be spotted by butterfly watchers and enthusiasts as they are widely distributed and sometimes frequent urban parks and gardens. 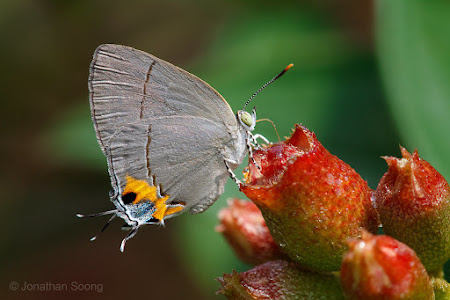 An Influent Royal feeding on the fruits of Singapore Rhododendron


This weekend's blogpost features some of the rarer "Royals" - some of which have been observed only a handful of times in Singapore over the past two decades. Of the five species featured, 4 are from the subfamily Theclinae of the Lycaenidae family and with the only exception from the subfamily Heliconiinae of the Nymphalidae family. 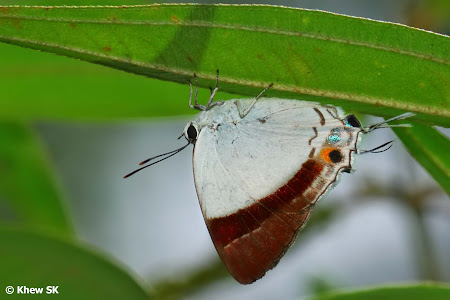 A species that was re-discovered in 2006 in the Central Catchment Nature Reserves, the Banded Royal is a species that has been observed more regularly than the other rare species featured in this blogpost. A fast-flying butterfly, the Banded Royal is occasionally spotted feeding at the ripened fruits of the Singapore Rhododendron (Melastoma malabathricum). Males are known to appear from time to time, perched on the tops of leaves or sunbathing with their wings partially open. 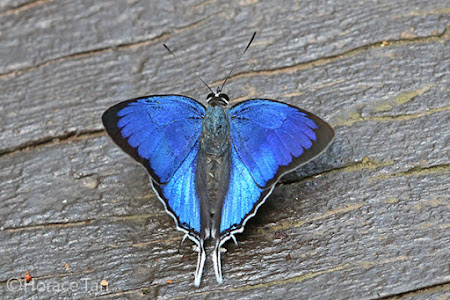 The male is a deep shining blue above with narrow black borders. The female is a drab brown above with some black spots at the hindwing tornal area. The underside is white with a broad brown distal border where the inner half is a darker brown. The hindwing has two tails at veins 1b and 2. One of the black tornal spots is orange-crowned and some blue scaling along the tornal area. The eyes of the Banded Royal are jet-black. 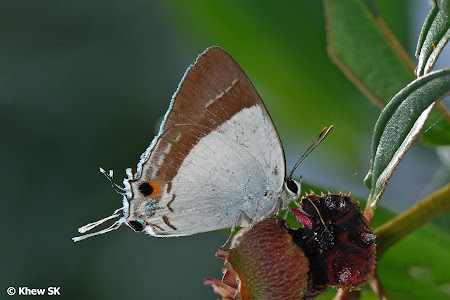 The caterpillar host plant is likely to be a parasitic plant like Macrosolen cochinchinensis or one of the Loranthus spp that many of these rarer Theclinae's caterpillars tend to favour. Its life history has not been successfully recorded yet in Singapore. 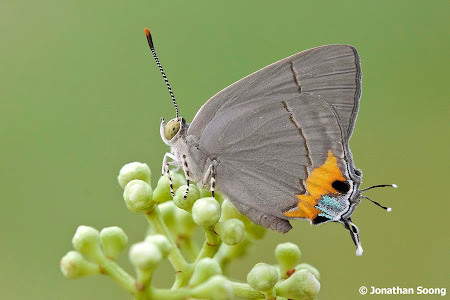 An Influent Royal perches on the flowers of the Bandicoot Berry

This Royal is considered very rare in Singapore and is the smallest of the three Tajuria species currently recorded in Singapore. It was first re-discovered in 2006 at Alexandra Hospital's Butterfly Trail, feeding on the ripened fruits of the Singapore Rhododendron. Subsequently, it was spotted sporadically over the years when its caterpillars or pupae were discovered and bred to adulthood. It is a rapid flyer and probably prefers to remain at the treetops. 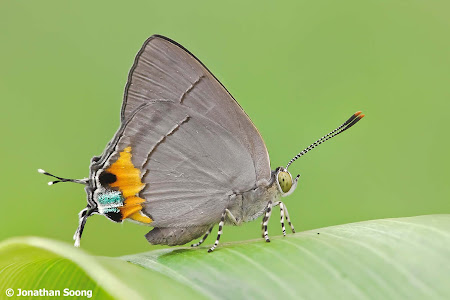 The name "Influent Royal" was christened by Pisuth Ek-Amnuay in the Butterflies of Thailand books, although the origin of the English name is curious. The meaning of influent refers to "a stream flowing into another stream." Or perhaps the author is trying to refer to influent to mean influential? For the time being, we will use this common name until some other more logical or apt name is coined for this species. 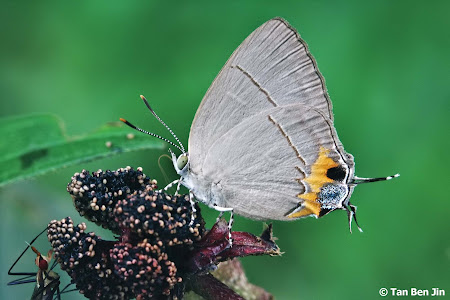 The male is bright blue above with a deep black visual brand at the end of the forewing cell. The forewing has a broad black apical border like many of the other species in the genus. The underside is a drab grey with the post-discal stripe placed closer to the cell than the termen. The two black tornal spots are orange-crowned, with the orange coalesced into a large tornal patch. There are two white-tipped tails and veins 1b and 2 on the hindwing. 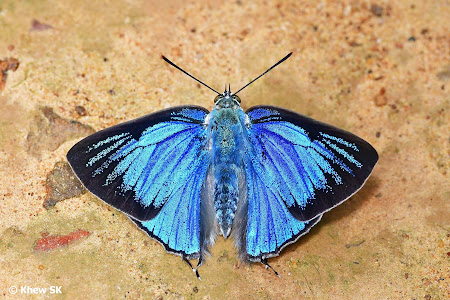 The upperside of a male Silver Royal

The Silver Royal has been seen only a few times in Singapore, but at least twice at the Southern Ridges hill tops. It was a re-discovery in 2005 when it was spotted feeding at the flowers of a Syzygium tree. A fast-flying species, it is usually skittish and probably prefers treetop habitats unless individuals descend to the lower shrubbery to feed or oviposit. 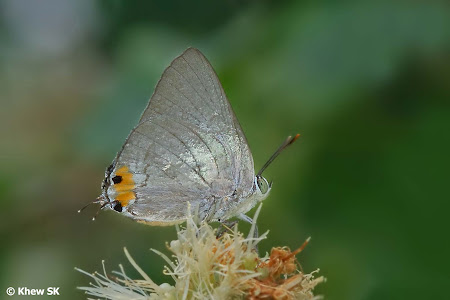 The male of the Silver Royal is a bright shining blue with broad black forewing borders and darkened veins on both wings. The female is a lighter shade of blue and has rounder wings. The underside is distinctive of this species and sports a silvery sheen when light shines at a certain angle on the wings. There are two prominent black tornal spots that are orange-crowned and there are two tails at veins 1b and 2 on the hindwing. 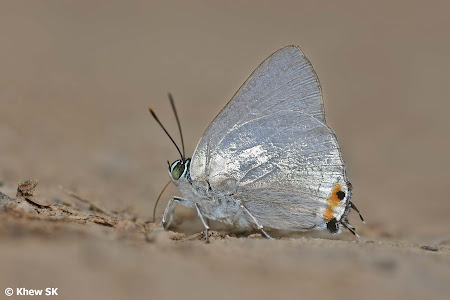 A Silver Royal puddling at a damp footpath

The species is sometimes observed to puddle at damp roadside paths and males are seen to occasionally opens its wings to sunbathe, showing the blue splendour of its iridescent wings. The caterpillar host plant is likely to be a parasitic plant but its life history has hitherto not been recorded in Singapore yet. 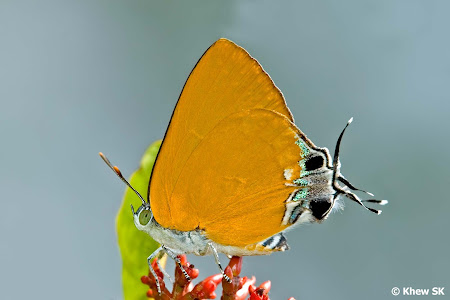 A Golden Royal perches on the buds of Javanese Ixora

Another re-discovered species in Singapore in 2005, the very rare Golden Royal (also known as the Dawnas Royal) has only been spotted no more than 3 times in Singapore. First spotted at a reservoir park, the species has proven to be extremely elusive although it is by no means considered a vagrant or a seasonal visitor. 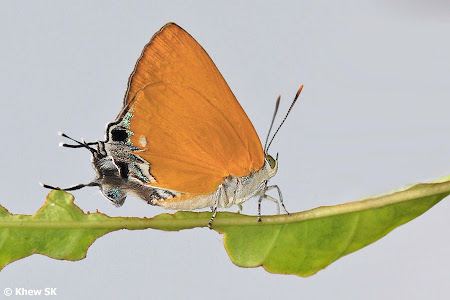 The male Golden Royal is a shining blue above with broad black borders on both wings. The female is of a lighter blue with the colour confined to the wing bases only. The underside is a rich golden yellow and unmarked on the forewing. The hindwing has a pair of black tornal spots and edged generously with metallic green scales. There are two white-tipped tails at veins 1b and 2 on the hindwing. 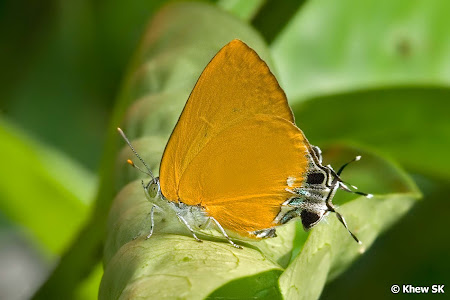 It is also observed puddling at damp streambanks and footpaths at times. The caterpillar host plant is unknown in Singapore, although it is likely to also depend on parasitic plants for its early stages. 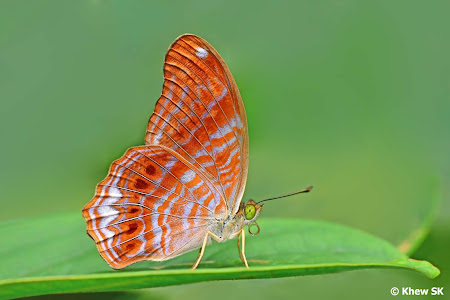 The last of our "Royals" has the name royal as a prefix to its common English name, unlike the 8 preceding species. The sole representative of its genus in Singapore, the Royal Assyrian is moderately rare and is a forest-dependent species that is rarely seen outside the forested nature reserves of Singapore. It has a habit of resting on the underside of leaves with its wings folded upright. At certain times of the day, it may be seen sunbathing with its wings opened flat, showing off its majestic purple uppersides. 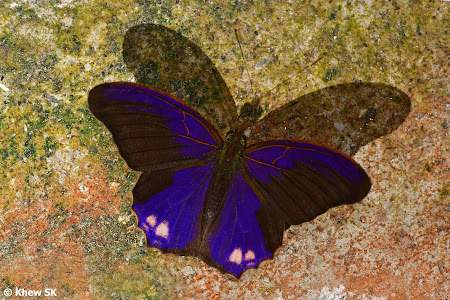 The Royal Assyrian is rich purple above with a white patch on the hindwing. The underside is purple-brown with a series of reddish-brown and pale blue stripes crossing both wings. The hindwing also features a series of large orange-ringed post discal spots. 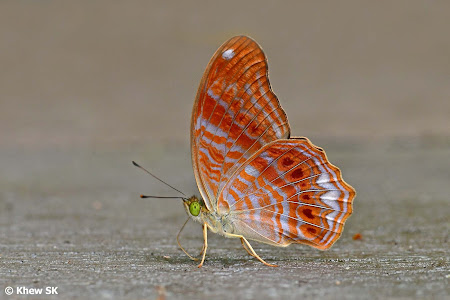 A Royal Assyrian puddling at a damp walkway at BTNR

The species has been successfully bred on the host plant Rinorea anguifera which can be found growing mainly in Singapore's forested nature reserves. The Royal Assyrian can sometimes be spotted puddling at damp footpaths and sandy streambanks in forested areas.

And that completes our introduction to all the Royal butterflies of Singapore.  I am sure that one day, there will be a few more Royals to add to our checklist, but that will be another story for another time.