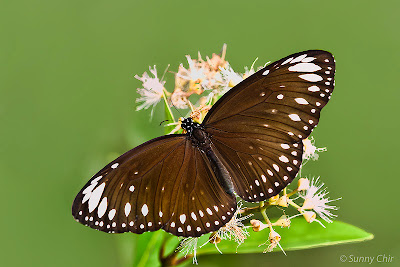 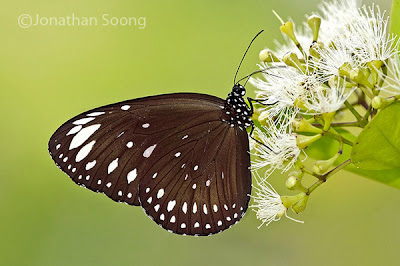 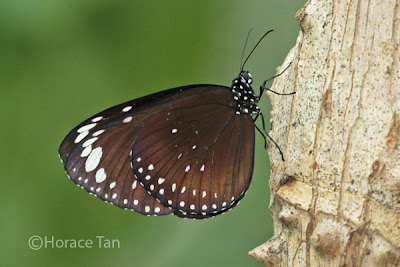 Another Spotted Black Crow resting on a tree trunk.

Physical Description of Adult Butterfly:
Above, both sexes are dark brown and feature marginal and submarginal series of white spots. Among the sub-marginal series of spots on the forewing, the spot in space 5 is large and wedge-shaped, while the spot in space 6 is twice as long, and the spots in spaces 7-9 are smaller and lens-shaped. The male does not have a brand above.  Underneath, the wings are brown with marginal and sub-marginal white spots similar to those on the upperside. On the hindwing, there are additional small white spots near the base of spaces 2 to 7.  On the forewing, there are small white spots in spaces 2-4. Both wings have a white spot in the cell. 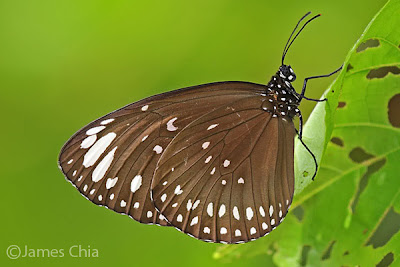 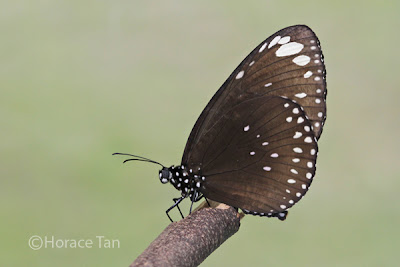 Field Observations of Butterfly Behaviour:
The  Spotted Black Crow is relatively uncommon in Singapore. Though not abundant, the adults have been observed in the nature reserves and mangrove habitats in Sungei Buloh Wetland Reserve, Pasir Ris Park and Pulau Ubin. The adults are attracted to flower blooms, and are easiest to approach for photo-taking when they are occupied during their flower visits. 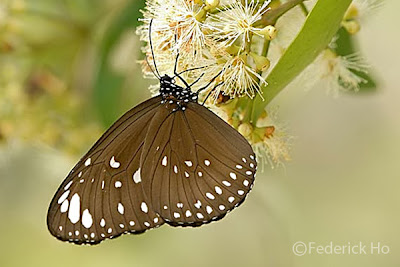 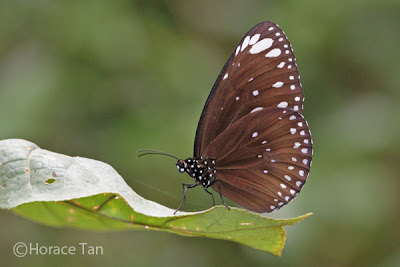 Early Stages:
The Spotted Black Crow is polyphagous and its two currently known host plants are both in the  Apocynaceae families. The caterpillars feed on leaves and young shoots of the host plants, typically with those in  early instars focusing on  young tender leaves and  those in later instars  on  more mature leaves. The caterpillar has the habit of first cutting the mid-rid or the petiole of a leaf  before eating the leaf lamina beyond the severed point. If the petiole is cut for this purpose, the caterpillar would spin a web of silk threads to secure the severed portion of the leaf. 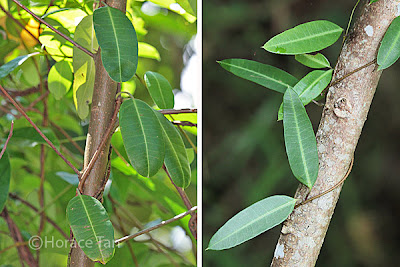 
The eggs of the Spotted Black Crow are laid singly on the underside of a leaf (typically young leaf) or on the vine of the host plants. The pale creamy yellow eggs are tall standing  (about 1.8mm in height) and somewhat ovoid (diameter: 1mm). The egg surface is covered with  shallow polygonal pits. 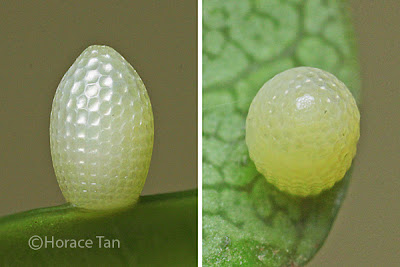 Two views of an egg of the Spotted Black Crow. 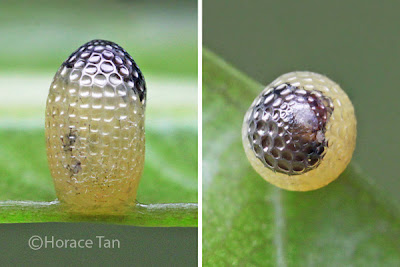 Two views of a mature egg of the Spotted Black Crow.

Hatching and eating of egg shell by a Spotted Black Crow caterpillar.


The egg takes about 3 days to hatch. The young caterpillar emerges by eating away part of the egg shell. The rest of the egg shell becomes the first meal for the newly hatched, which has a length of about 3mm. The newly hatched has a pale yellowish  body and black legs. The large head capsule is black in color. A pair of very short and inconspicuous dorso-lateral protuberances can be found  on each of the following four segments: 2nd and 3rd thoracic segments, the 2nd and 8th abdominal segments. 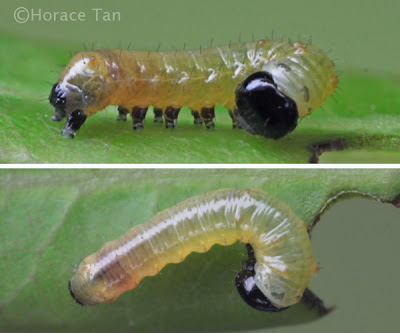 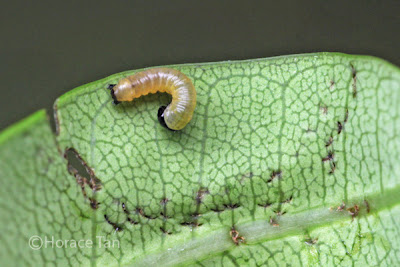 A 1st instar resting within the marked out zone of a leaf.


Once the newly hatched moves on to feed on the leaf lamina, its body starts to take on a green undertone. The newly hatched has this interesting  habit of marking out a  portion of the leaf with  a series of small bite-marks before eating away the marked out portion. In the final half day of the 1st instar, the body takes on reddish brown transverse stripes on all segments. This instar lasts for 1.5-2 days with the  the body length doubled up to 6 mm. 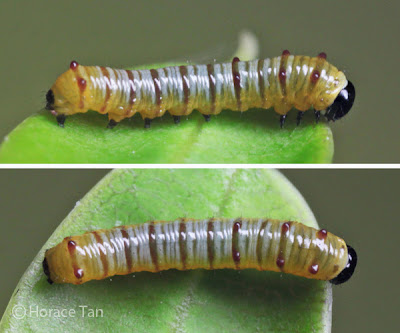 Two views of a 1st instar caterpillar,  late in this instar, ength: 5mm


The body of the 2nd instar caterpillar has a yellowish orange ground color. From the 2nd thoracic segment to the 8th abdominal segments, there are dark brown  transverse rings interspersed with broad whitish bands. On each of these segments, one broad dark brown transverse is broader than the rest and extending further down to the yellowish orange ventrum ( reaching and passing the spiracles). The most obvious change is the lengthening of the 8 tiny protuberances seen in the 1st instar to short processes, each of which is almost entirely dark brown to black. There are two small black spots on the dorsum of the prothorax, and one large black patch (anal plate) on the posterior end of the body. This instar lasts only 1  day  with the body length reaching about 11.5mm before the moult to the 3rd instar. 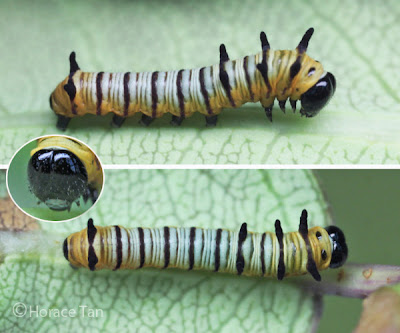 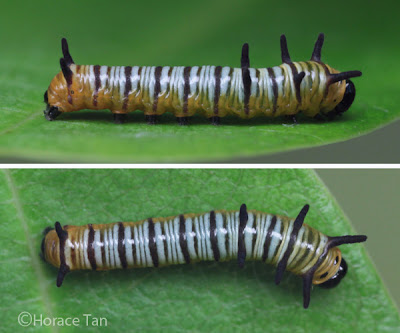 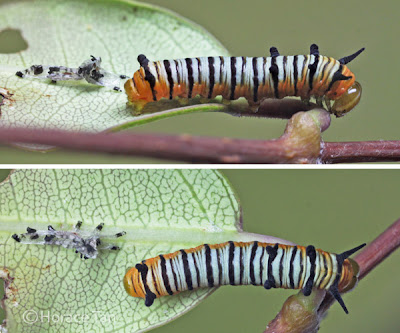 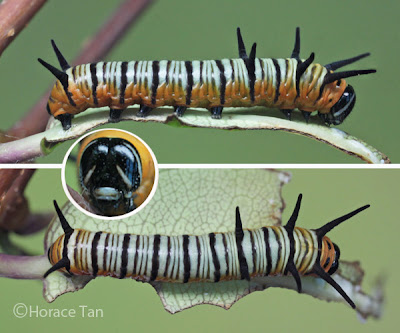 
Compared to the 3rd instar, the 4th instar caterpillar has proportionately longer processes.   The black head capsule features two   oblique and joined white stripes and  an outer peripheral white ring. On some specimens, the white stripes on the dorsum take on a pale creamy white coloration. This instar lasts 2 to 2.5 days with the body length reaching about 30mm. 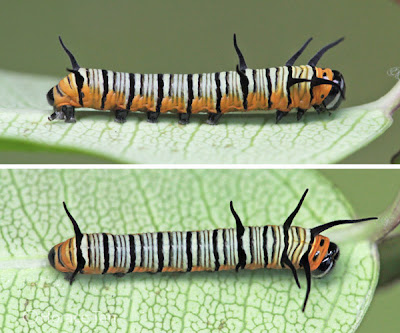 Two views of a 4th instar caterpillar, early in this stage,  length: 18mm. 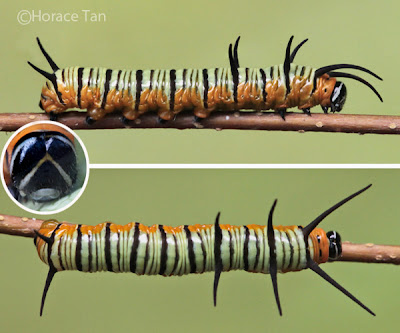 
The 5th instar caterpillar again has proportionately longer processes. Otherwise it is rather similar to appearance to the 4th instar caterpillar. On the upper half of the body segment the black stripes are now interspersed with pale creamy yellow bands. 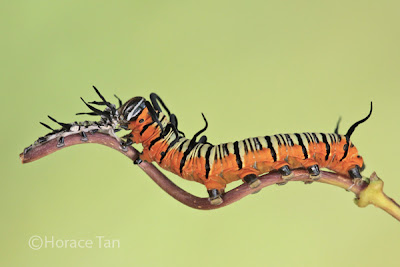 A newly moulted 5th instar caterpillar eating its exuvia on a vine of Gymnanthera oblonga.


As is the case of the Striped Blue Crow, the Spotted Black Crow caterpillar does not have the prosternal gland previously discovered  in caterpillars of  the Blue Spotted Crow (E. midamus singapura) and the King Crow (E. phaenareta castelnaui). When the caterpillar was  intentionally agitated, it would adopt a rather common head-tugged defensive stance. 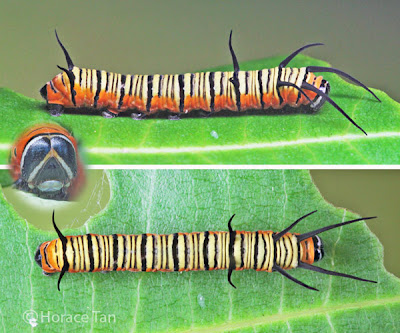 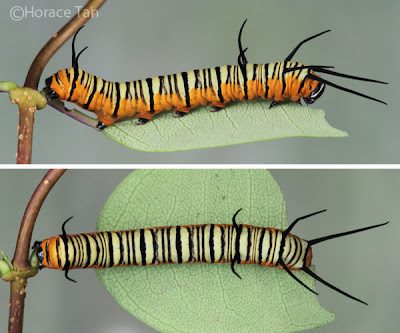 Two views of a 5th instar caterpillar, late in this instar, length: 45mm.


A Spotted Black Crow going through the chores of becoming a hanging pre-pupa.


The 5th instar lasts for 3.5-4 days, and the body length reaches up to 51-53mm. On the last day, the caterpillar ceases feeding, and its body becomes shortened and decolorised slightly. For pupation, the caterpillar typically chooses a spot on the mid-rib of a leaf underside. At this pupation site, the caterpillar spins a silk pad from which it then hangs vertically to take on the pre-pupatory pose. 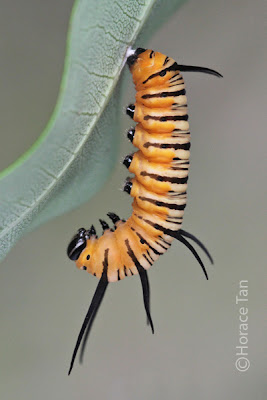 A pre-pupatory larva of the Spotted Black Crow.


Pupation takes place 0.5 days after the caterpillar assumes the hanging posture. The pupa  suspends itself from the silk pad with no supporting silk girdle. Initially, the pupa is in a light shade of yellowish brown, but the surface gradually takes on a silvery metalic glitter about a day later. The pupa is rather rotund, and has rows of small dorso-lateral black spots in the abdomen, and three large black spots in the wing pad. Length of pupae: 19-21mm.


A Spotted Black Crow caterpillar moults to its pupal stage. 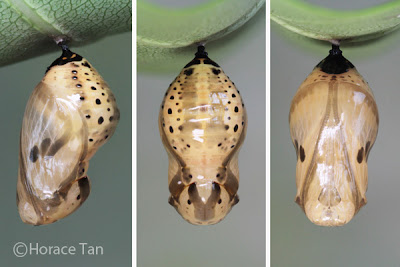 Three views of a fresh pupa of the Spotted Black Crow, 3-4 hours after pupation. 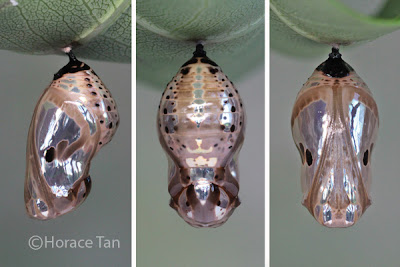 Three views of a shining pupa of the Spotted Black Crow, one day  after pupation. 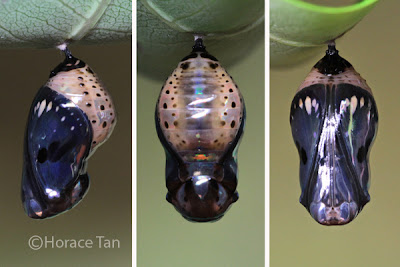 Three views of a mature pupa of the Spotted Black Crow, night before eclosion.

After about 7 days of development, the pupal turns black as the development within the pupal case comes to an end. The white spots on the forewing upperside become discernible through the now translucent skin. In the following morning, the adult butterfly emerges from the pupal case, and  perches nearby to expand and dry its wings before taking its first flight.

A Spotted Black Crow emerges from its pupal case. 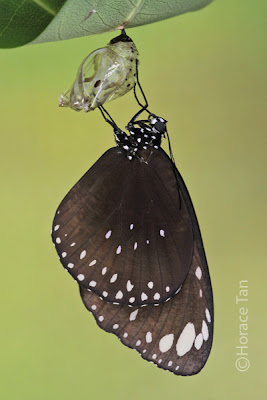