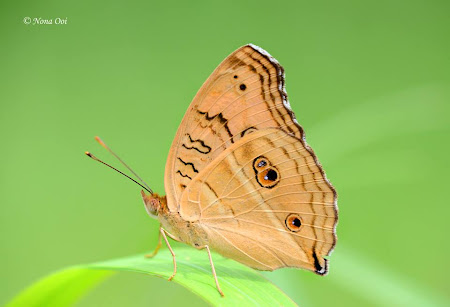 The Peacock Pansy is one of four Pansies found in Singapore. Sun-loving butterflies, all the four belong to the genus Junonia, of which there are six species in the Southeast Asian region. Two of them, the Lemon Pansy and the Yellow Pansy are not found this far south. In flight, the Pansies are fast on the wing and adopt a rapid gliding flight.
The Peacock Pansy is predominantly orange with large eyespots adorning both wings. The underside is paler with the same markings and ocelli as the upperside. The caterpillars of this species feed on the Creeping Ruellia (Ruellia repens). The species is fairly common and usually found in open grassy areas. This perching Peacock Pansy was shot by ButterflyCircle member Nona Ooi last weekend.
Posted by Commander at 8:00 AM 2 comments