Butterfly of the Month - February 2022 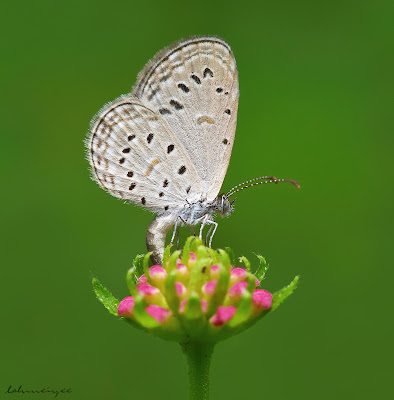 A Pygmy Grass Blue ovipositing in the flower bud of its preferred caterpillar host plant - Lantana camara
The month of February has been pretty eventful on many fronts - both celebratory for some and distressing for others. For the Chinese community all over the world, we heralded the new Year of the Tiger on Lunar New Year's day on 1 Feb. Amidst the continuing spread of Covid19 and the Omicron variant, celebrations were somewhat muted, but still, it's the Lunar New Year and the resilient human race will continue its fight against the virus. 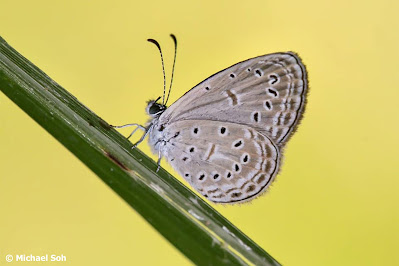 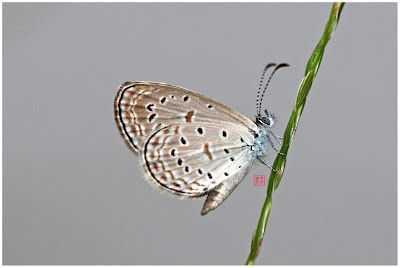 This mutation of the Covid19 virus appears to be even more contagious, but the good news is that statistics show that it is also less severe than the previous variants. Fatalities are much lower, as is the need for hospitalisations, but nonetheless still a risk to the community. Some of the infected are even asymptomatic and a large majority of the infected showing milder symptoms than the preceding Delta variant. 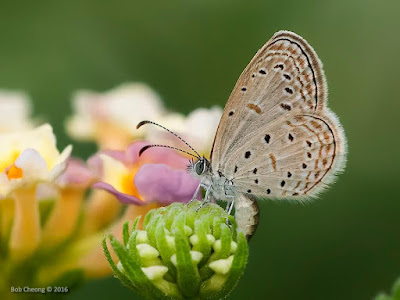 Pygmy Grass Blue ovipositing on its preferred caterpillar host plant - Lantana camara
As the world looks ahead with more optimism and learning to live with the virus, travel restrictions between countries are starting to open up, albeit with some cautious safety measures put in place to minimise the risks. Some nations are already beginning to relax their control measures and policies and gearing themselves up for a new normal, and opening up economies to sustain livelihoods. 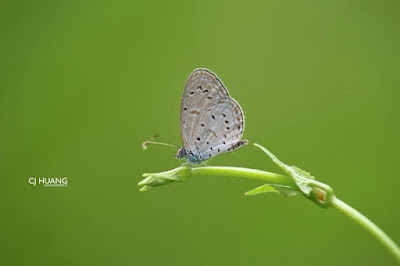 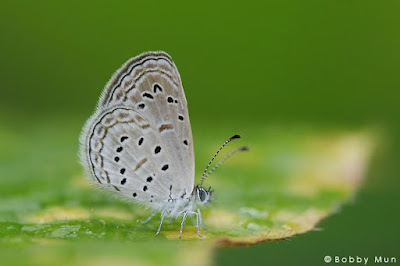 And then on 24 Feb, the optimism was shattered by Russia's military invasion of Ukraine. Long brewing, the Russian attack shocked the world, as in this age and time, not many would believe that nations can go to war, resulting in military as well as civilian casualties. As the global news is dominated by news about the Russian invasion, it does become obvious that the superpowers tend to avoid further conflict by standing on the sidelines and biding their time, whilst the oppressed continues to face the uncertainty of losing their country to the invaders. 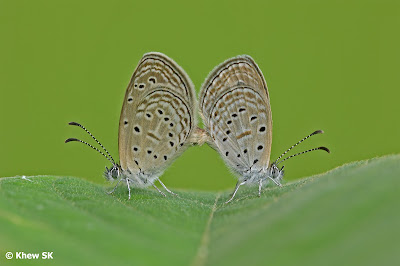 A mating pair of Pygmy Grass Blues
We go back to our peaceful butterfly world by introducing the smallest butterfly (by wingspan) in the region. Our Butterfly for February 2022 is the Pygmy Grass Blue (Zizula hylax pygmaea). A common (and sometimes abundant) urban butterfly, the Pygmy Grass Blue often flutters around restlessly on warm sunny days amongst shrubbery and open grassy areas. Often, many individuals can be seen together. 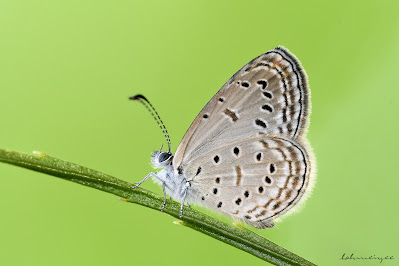 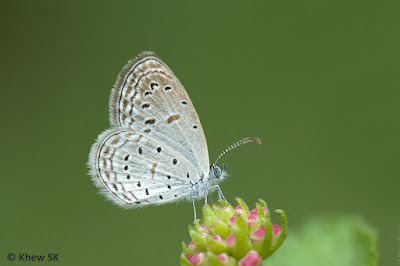 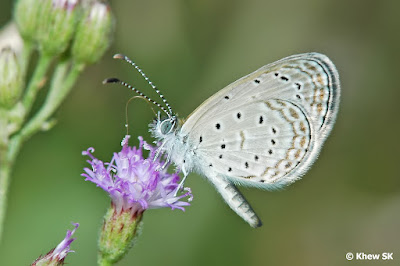 The Pygmy Grass Blue is also referred to as the Tiny Grass Blue in various references and the common names are used interchangeably. The butterfly is small, with a rather variable average wingspan ranging from 14-22 mm. It flies together with other species of Polyommatinae, like its closest relative the Lesser Grass Blue (Zizina otis lampa). The species has an erratic flight, and coupled with is diminutive size, can sometimes be hard to identify with confidence if it does not stop to rest or feed. 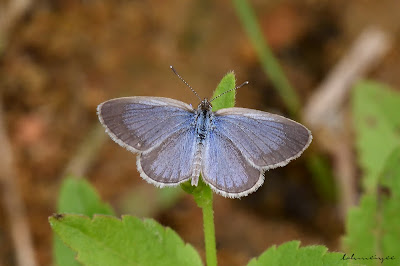 Upperside views of the Pygmy Grass Blue - Top : Male, Bottom : Female
The male Pygmy Grass Blue is dull blue above, with broad dark borders on both wings, whilst the female is predominantly brown and unmarked. The underside is greyish-white with the usual black spots and light greyish-brown streaks and submarginal markings. There is a distinctive V-shaped sub-apical spot on the underside of the forewing that distinguishes it from the other Grass Blues. 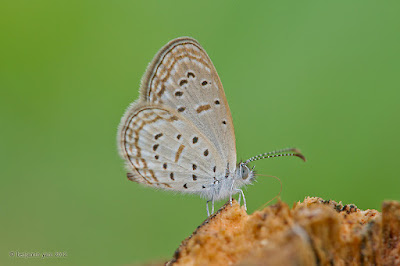 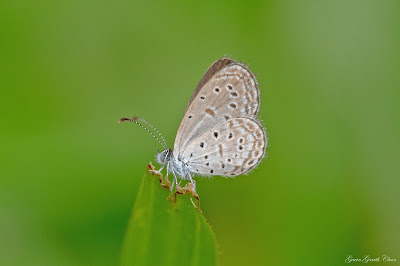 An aberrant Pygmy Grass Blue with the forewing subapical spot rounded instead of V-shaped
The post-discal black spots on the underside of the hindwing are aligned, unlike the Lesser Grass Blue. The antennae are banded black-and-white whilst its eyes are transparent. The palpi are hairy and gives it a distinct unshaven look. It uses all six legs to support itself when perched. 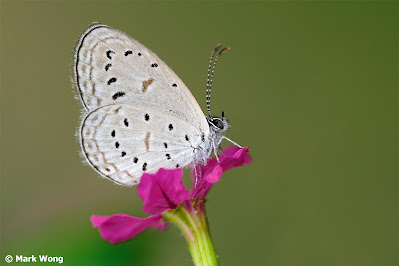 The Pygmy Grass Blue is regularly seen fluttering amongst common garden plants. A favourite is the Prickly Lantana (Lantana camara), where this diminutive butterfly is observed ovipositing on the young buds of the flower. Other caterpillar host plants that have been recorded are Mimosa pudica, Ruellia repens and Desmodium triflorum. A Pygmy Grass Blue puddling at a sandy streambank
Occasionally, the butterfly, particularly males, can be observed puddling at damp footpaths and sandy stream banks.  At certain hours of the day, both the males and females can be spotted opening their wings to sunbathe, showing the uppersides of their wings. Due to their abundance in certain localities, mating pairs of the Pygmy Grass Blue are regularly seen and photographed.
Text by Khew SK : Photos by David Chan, Gavin Chan, Bob Cheong, Huang CJ, Khew SK, Loh MY, Bobby Mun, Michael Soh, Mark Wong and Benjamin Yam
Posted by Commander at 1:08 PM 1 comments