A New Lycaenidae species for Singapore! 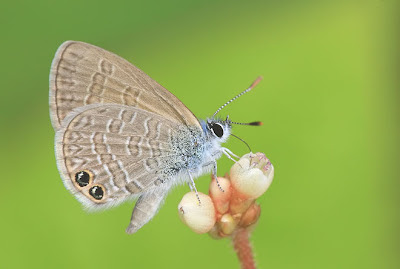 Some time back, in 2004, ButterflyCircle member Federick Ho shot a small Lycaenid which had our group wondering what whether it was an aberration of one of our local species, and we filed it in our UFO (Unidentified Flying Object) folder and forgot about it, as it did not appear to match anything in the books for any species flying in the South East Asian region.
In Feb 2005, another record shot of this strange Lycaenid was again taken by Federick, and this time, it did not appear to be an aberration. Internet searches turned up some similar looking species from the Australian region, but it did not appear that it would be possible for a small butterfly to migrate all the way from down under. 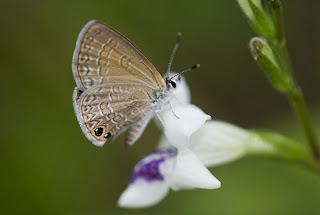 Then again in Nov 2006, another of our hardworking ButterflyCircle members, Horace Tan, shot this strange looking butterfly at one of our urban parks. 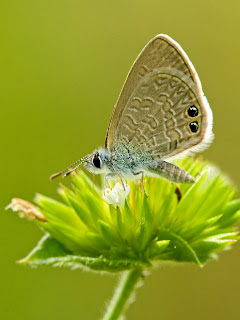 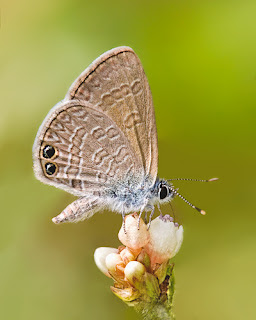 Finally, on Chinese New Year's Day, the Butterfly Fairy smiled on Federick Ho once again, but this time, besides being able to shoot the species again, he and Tan BJ sighted a small colony of this species, proving that it was not a wayward migrant or a one-off stowaway species that somehow got to Singapore. This had the group's members all excited, and on a weekend outing, we saw no less than half a dozen individuals - both males and females, flying around a flowering bush. 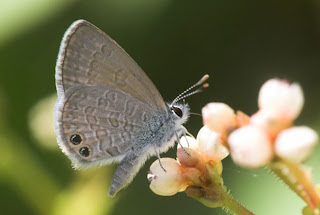 With the superior skills of our group of accomplished butterfly photographers from ButterflyCircle, the hitherto unknown species was finally recorded with clarity and sharpness, confirming what Federick and Horace shot earlier was not a phantom butterfly!
Internet searches found an Australian species of Nacaduba. This species, known as the Two Spotted Line Blue (Nacaduba biocellata) and the descriptions from several Australian websites, matched the UFO that we found in Singapore. 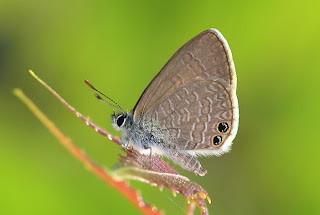 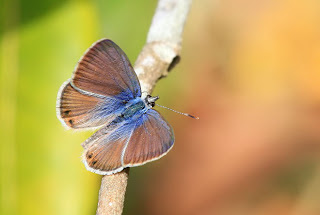 The species is described as common and sometimes abundant in Australia, where its host plants are various species of Acacia. In Singapore, where the invasive Acacia auriculiformis - Earleaf Acacia, or the Northern Black Wattle or the Australian Wattle, grow wild, it is likely that the Two Spotted Line Blue has also adapted to feed on this species of Acacia. Indeed, at the location where this colony was found, there are a few Acacia trees nearby and the butterflies were seen to fly up towards the tree at times. 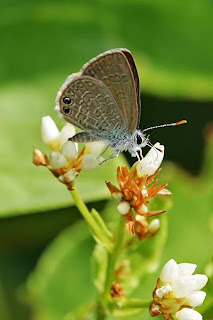 Given the physical appearance of this species, it is definitely one that has not been recorded in Singapore before. How it was able to 'migrate' this far from Australia is anybody's guess. But it is likely that human agency is involved, rather than natural migration. The species is therefore added to the Singapore Butterfly Checklist with the tentative name of Two Spotted Line Blue (Nacaduba biocellata) whilst further checks are being made with experts in the field - particularly the Australian lepidopterists. 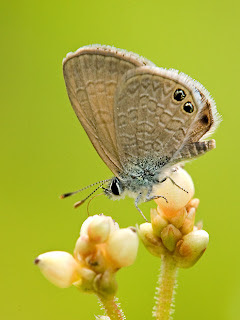