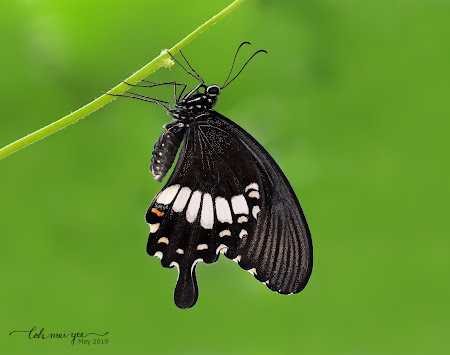 
In earlier articles on sexual dimorphism (Part 1 and Part 2), we took a look at how different sexes of butterflies show differences in external wing patterns, colours, shapes and sizes. In some of the cases, the differences are so significant that, to the beginner, they would appear as two totally different species! 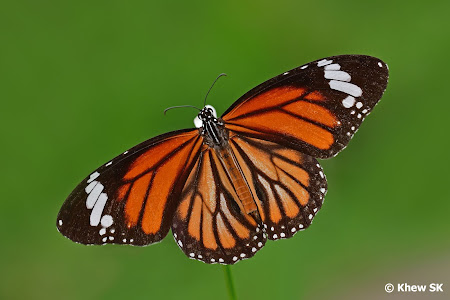 
This article looks at the differences in which one or both sexes occurs in two or more very distinct and identifiable "forms". This phenomenon, known as polymorphism, highlights some species that have distinctly different physical appearances but occur regularly and consistently enough to be identified as a form of the species. The Common Mime is polymorphic, but only form-dissimilis flies in Singapore 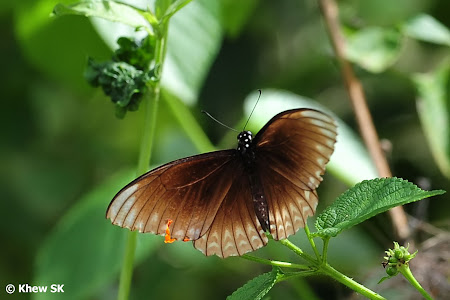 A Common Mime form-onpape, which resembles one of the Crows (Euploea spp) flies in northern Malaysia 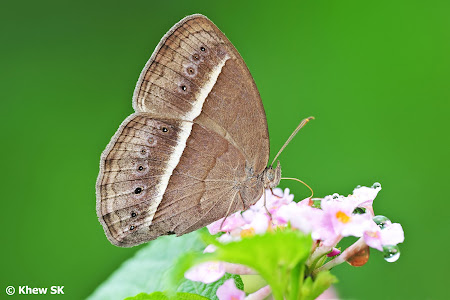 A Long Brand Bush Brown (Mycalesis visala phamis), probably a dry-season form which is rare in Singapore where there is a less distinct dry and wet seasons throughout the year 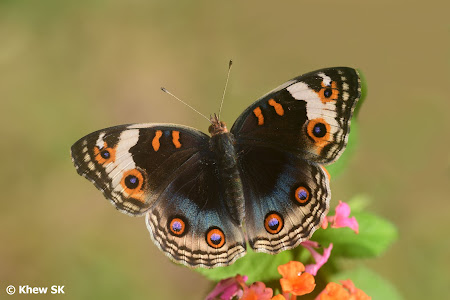 
However, like many examples in evolutionary biology, there is rarely a single set rule or conclusion that applies universally. There are also examples of species where polymorphism cannot be attributed a purely mimetic resemblance for any form of protection. In these cases, why is there a need to display different forms of the species? Are there any other reasons why these species should have different forms? There are still many mysteries to uncover.


Some examples of polymorphism across the different families of butterflies found in Singapore are used here to illustrate polymorphism : 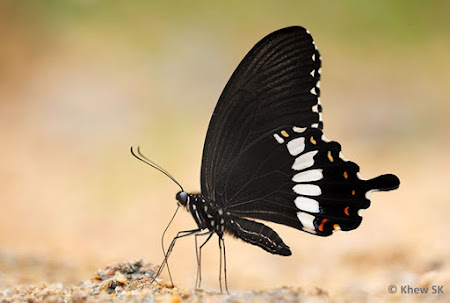 A male Common Mormon puddling at a sandy streambank

The Common Mormon is a classic case study by researchers with regard to the polymorphic females. In particular, form-polytes that mimics the distasteful Common Rose (Pachliopta aristolochiae asteris) for protection. In other regions, there are other forms of the female, like f-romulus and f-theseus, that mimics other distasteful Papilionidae. Details of the polymorphic mimicry are outlined in this paper. 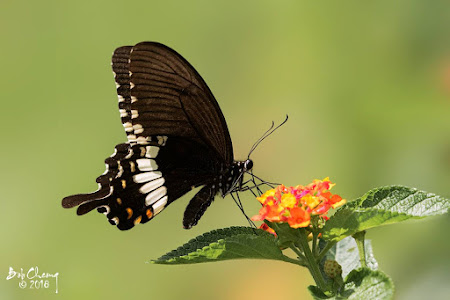 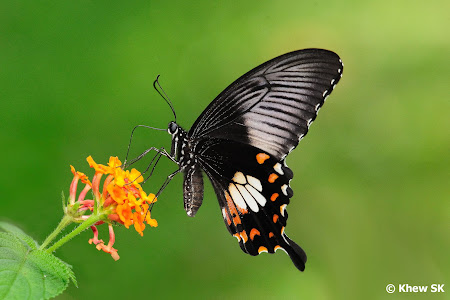 In this case, the polymorphism in the female is assumed to be for the species' protection against predation by mimicking a distasteful species. However, there is another form of the female, f-cyrus, which is almost indistinguishable from the male. If the mimetic protection is successful, then why is there a non-mimetic form? Or could it be case where the species is still evolving to a stage where the unprotected female form will be obsolete some time in the future? 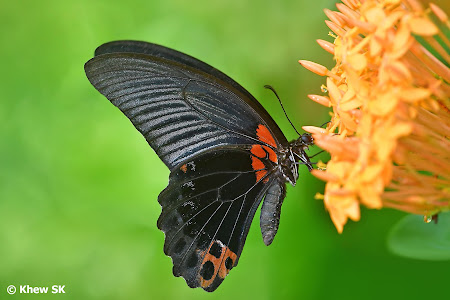 A male Great Mormon feeding at the flowers if Ixora

Another Papilionidae that features polymorphic females is the Great Mormon. The species continues to evolve with many forms of the female, some of which have been discovered only in recent years. In Singapore thus far, four different forms have been observed - f-esperi, f-butlerianus, form-distantianus and form-agenor. 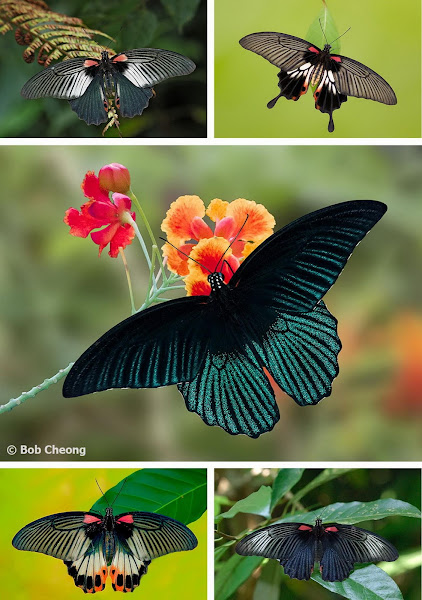 The polymorphic mimicry of the first three forms is based on their resemblance to the distasteful species of Malayan Batwing (Atrophaneura nox erebus), Common Batwing (Atrophaneura varuna varuna) and Common Clubtail (Losaria coon doubledayi). The last form-agenor does not seem to have a model. However, it is important to note that the effects of protective mimicry in Singapore would have long been neutralised by the fact that all the distasteful models are no longer found here. So why does the Great Mormon still continue with its polymorphism? 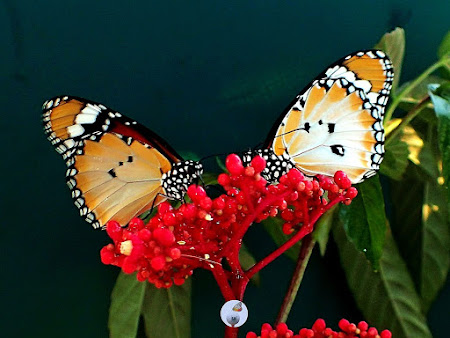 The Plain Tiger, a common urban species that is often found in parks and gardens in Singapore features two different polymorphs - form-alcippoides (with white hindwings) and form-chrysippus (with orange hindwings). Of the two, the white hindwinged form is by far the commoner. 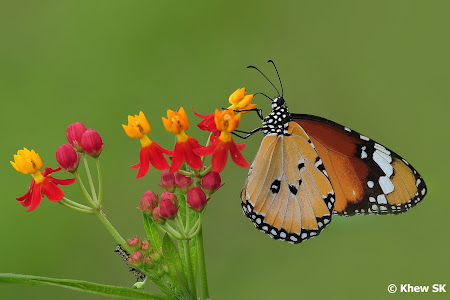 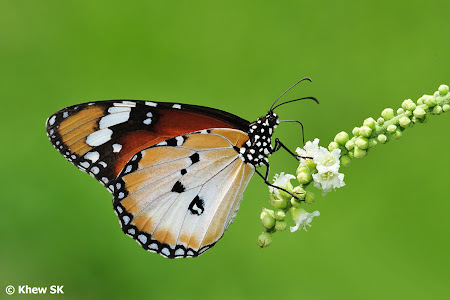 It is not known for certain why this species displays this polymorphism. The Plain Tiger is already a distasteful species, hence the different forms do not need any protection through mimicry. Across the region, the orange-hindwinged form-chrysippus appears to be the commoner form in northern parts of Malaysia, but the opposite is true for Singapore and the southern regions of West Malaysia. 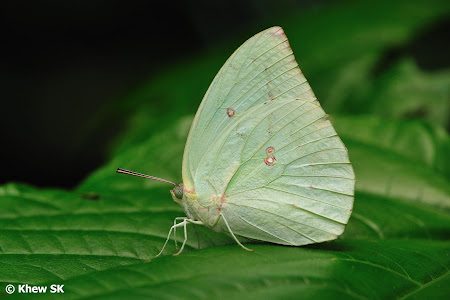 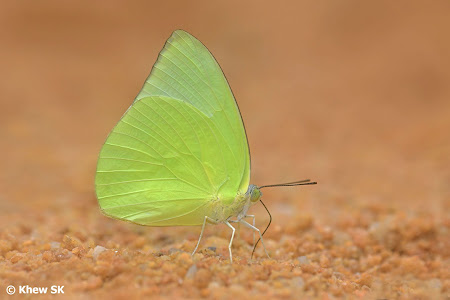 Amongst the Pieridae, the Lemon Emigrant is the most well-known for its polymorphism. There are no fewer that seven different forms observed in Singapore - form-alcmeone, form-hilaria (for the males) and form-jugurtha, form-crocale, form-pomona, form-nivescens and form-catilla (for the females). 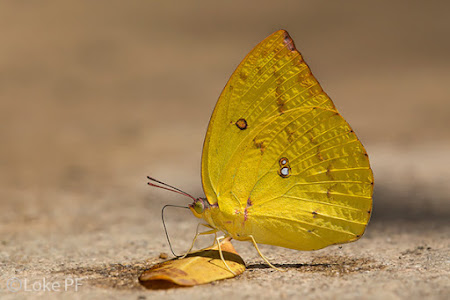 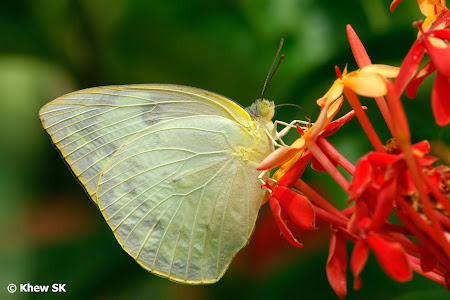 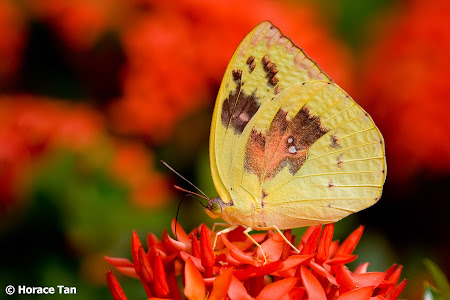 That the species has both male and female polymorphs (or forms) is particularly interesting. This is especially so, when the basis of the polymorphism does not appear to be related to protective mimicry. Then why does a species needs to have so many forms in both the males and females? It is a question that evolutionary biology researchers may well find out in the future. 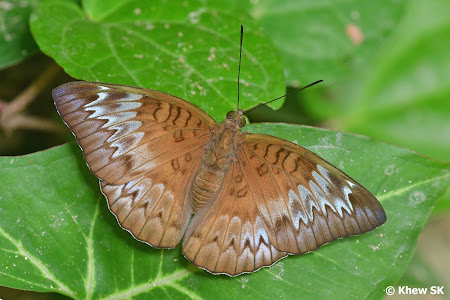 The Malay Baron is another curious species that is polymorphic, but only in the males! Whilst it is clear that females are polymorphic for predative protection by mimicry, why then would males need to be polymorphic? In the case of the Malay Baron, the different forms of the males - form-monina, form-gardineri and form-decorata do not seem to have any functional purpose. Furthermore, there are many intermediates and variations to the different forms that suggest that perhaps there could be more forms in the making. 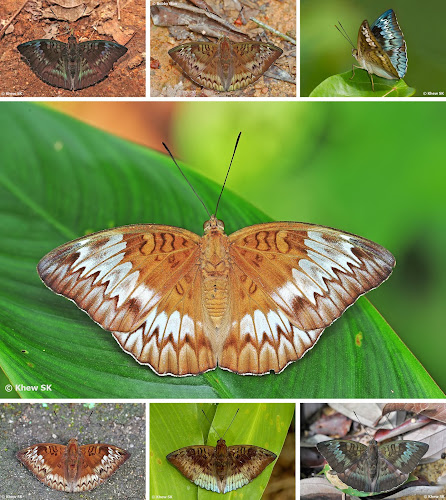 The female is monomorphic and much larger than the males. It resembles several other related species in the sub-family - all of which have no known distastefulness to predators. Again, the question of why a species is polymorphic whilst other related species are not, becomes a mystery that remains to be researched further, where there are more questions than answers. 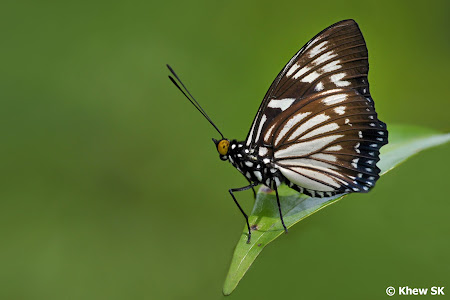 A male Courtesan perches on a leaf.  It is about 2/3 the size of the female

The Courtesan is a rare species in Singapore. The polymorphic females, form-isina and form-euploeoides mimic the male and female Magpie Crow (Euploea radamanthus radamanthus) respectively . It is obvious that the polymorphism is based on protective mimicry where the females mimic the distasteful Danainae. 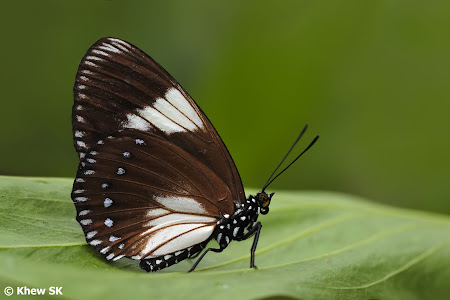 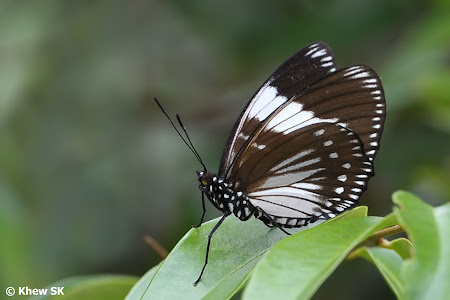 Of interest is the very subtle difference between the two forms, unlike some of the other species highlighted in this article. The male and female Magpie Crow is only different in the more extensive white markings on the hindwing. The female Courtesan mirrors this subtle difference in the two forms. Essentially, either form would have been able to satisfy the protective resemblance. 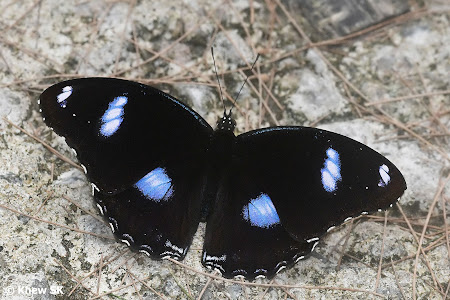 A Male Great Eggfly foraging on a forest trail

Another species of interest is the Great Eggfly and Jacintha Eggfly, where both subspecies fly in Singapore. It is likely that eventually, one subspecies will prevail and the other fade out. However, at the moment, there is an element of doubt separating the two subspecies and requires further research. 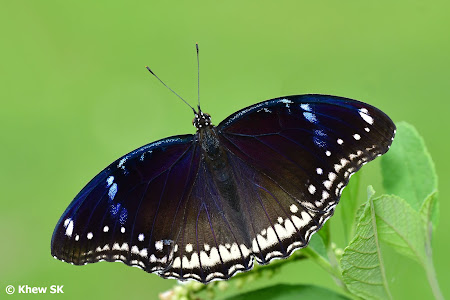 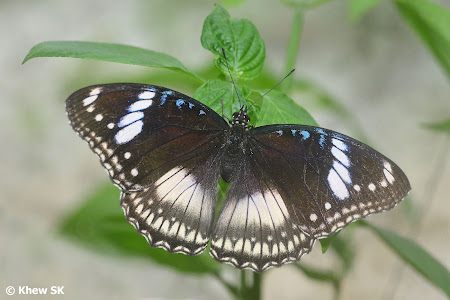 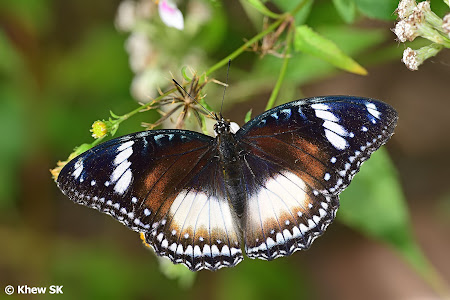 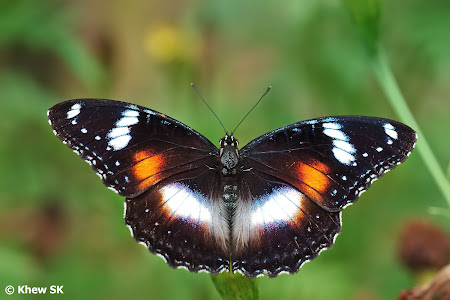 Polymorphic females of the Great and Jacintha Eggfly found in Singapore

The polymorphism is only applicable to the females of the Great Eggfly and Jacintha Eggfly. Although there were earlier attempts to name the forms of the females, there appears to be so many variants and new forms appearing over recent years that may cause confusion as to the forms that are in existence. Also, in Singapore, there appears to be more female forms of the subspecies jacintha than of subspecies bolina. A useful paper on polymorphism in this species can be found here.