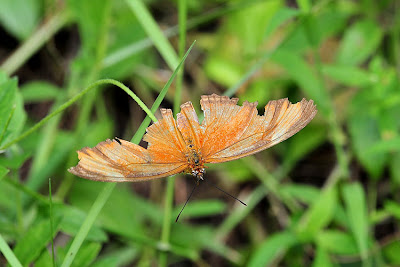 On a recent trip to Pulau Langkawi, members of ButterflyCircle chanced upon a species of butterfly that has hitherto not been recorded in Malaysia. On location at Tanjung Rhu Beach, it was deja vu, as this was the place where I saw my first Leopard Lacewing (Cethosia cyane) back in 2001. Fast-forward to Sep 2009, another new species was spotted at almost the very same location where I saw the Leopard Lacewing! 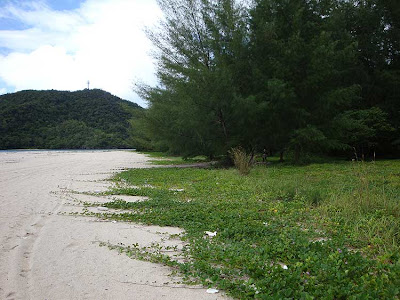 A shot of the Tg Rhu Beach area where the pair of Dryas iulia was seen.

Whilst walking amongst the coastal vegetation, ButterflyCircle members Bobby Mun, Ellen Tan and I spotted a rather large orange butterfly fluttering amongst the wild flowers at low level. I instantly knew that this wasn't the usual Tawny Coster as the size and the flight characteristics were different. Upon closer examination, we found that the large orange butterfly, a male, was fluttering around a female of the same species which was feeding on the flowers. 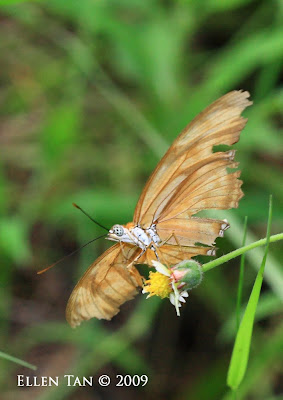 The male, startled by our intrusion, beat a hasty getaway, and flew away towards the safety of the forested area. The female, however, continued with her unflustered fluttering amongst the herbage, looking for nectar from the wildflowers. As she continued to feed, we observed that her wings were badly tattered. Despite that, she was still able to fly nonchalantly from flower to flower, allowing the three of us to fire off several shots, as she paused at various flowers to feed. 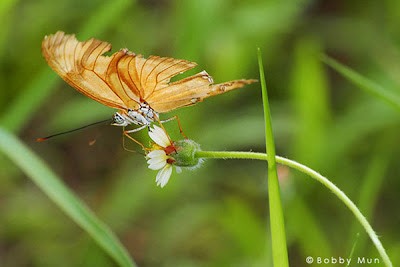 After a short while, she also sensed our presence, and flew off towards the tree canopy and disappeared into the forested area. 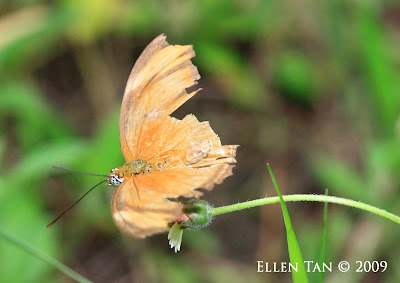 Upon closer scrutiny of our photos, I realised that this unknown butterfly could very well be a new record for Malaysia. (Subsequent confirmation by Dr Laurence Kirton of FRIM established that this is a new record for Malaysia) The species was a Dryas iulia (or commonly known as the Julia Heliconian or Julia Butterfly). From literature research on the Internet, about 15 subspecies of Dryas iulia have been described. The species is native to South America, occuring from Mexico to Colombia and Brazil, and has a range reaching the North American states of Florida, Texas and as far north as Nebraska.
The Julia Heliconian is the sole representative of the genus Dryas and is described to be a fast flyer and a rather large butterfly with a wingspan ranging from 82 to 92mm. Its elongated forewings are characteristic of this species, whilst the hindwings are small in relation to the forewings.

I have observed this species bred at the Phuket Butterfly Farm when I was on vacation in 1997 and from the numbers flying around within the enclosure, it appeared to be an easily bred butterfly, even in captivity. I also later saw a few individuals flying outside the enclosure, at the garden of the hotel where I stayed, the Allamanda Laguna Phuket. 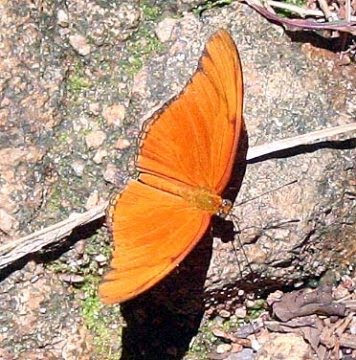 Over at Koh Samui, ButterflyCircle member Leslie Day has also regularly encountered Dryas iulia flying freely on this resort island on the eastern coast of the Thai Peninsula. It is interesting to note that this species, probably brought in from Brazil to be featured at a Thai Butterfly Farm at Phuket (and likely others) has escaped and spread throughout southern Thailand in the late 90's and early part of this decade. 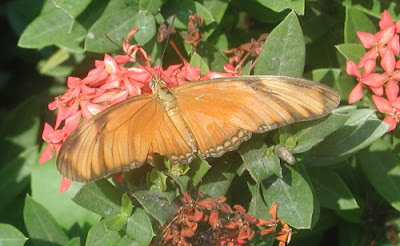 A shot of a female Dryas iulia taken at Koh Samui. The markings on this individual correspond very closely to the one shot at Tg Rhu Beach at Langkawi

The Julia Heliconian is described as a tenacious survivor that is distasteful to birds, and has a long life span (some reports have it at 3-4 months!). Its host plants are predominantly species of Passifloraceae, and it is highly likely that in Thailand, the species shares the same host plant as the Leopard Lacewing and the Tawny Coster - Passiflora foetida. Indeed, this host plant was also present at the forested patch at Tanjung Rhu Beach.
It is also to be highlighted that the species was not featured in Pisuth Ek-Amnuay's Butterflies of Thailand 1st Edition, suggesting that the Julia Heliconian may be a very recent immigrant to Thailand, and not considered as part of Thailand's butterfly fauna. However, its appearance as a free-ranging species in parts of southern Thailand would suggest that it has been able to survive and thrive in our SouthEast Asian environment that is somewhat climatically similar to its region of origin in South America.
Having found a pair of the species fluttering freely on Pulau Langkawi, a not-too-long distance from where I first encountered the species on Phuket Island in Thailand, it does not come as a great surprise that this robust butterfly has now spread southwards into Malaysia, and may have colonised some areas between Thailand and Malaysia.
It now remains to be seen how fast this species can move southwards down Peninsula Malaysia like the immigrant Leopard Lacewing and Tawny Coster, both of which eventually ended up in Singapore (and are now "permanent residents") about 8-10 years after first being spotted in the northern part of Malaysia.
Will this South American beauty end up as a resident species in foreign talent-friendly Singapore? Keep your eyes peeled for this species as it begins to samba its journey southwards.

Text by Khew SK ; Photos by Bobby Mun, Ellen Tan, Khew SK, Leslie Day and Simon Sng.
Acknowledgements : Special thanks to Dr Laurence Kirton of FRIM who confirmed that the photos were indeed of Dryas iulia. However without a specimen to examine, we are unable to confirm the subspecies that now occurs on Pulau Langkawi. It is most likely the same subspecies that has been bred in Thailand, but that remains for other researchers to establish in the near future.
Posted by Commander at 2:00 PM

Cool find of a samba butterfly. I salute the inquisitiveness and the breadth and depth of butt knowledge.

Thanks, Henry. This was a chance encounter - being at the right place at the right time. I hope that more butterfly watchers in Malaysia will look out for it and record its progress southwards following the trail of the other two species that have made their way down south. Coincidentally all 3 share a same host plant.

We first noticed it in the state of Selangor around 2014. A few friends and I engaged with collecting, marking and releasing specimens over the period of a few months and found that The population grew fairly quickly and I believe the species has been stable/established in the Subang-Bandar Sunway - Shah Alam area where it competes and in some places has displaced the tawny coster.