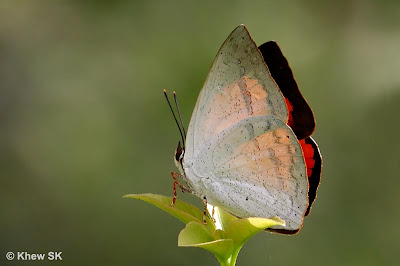 Another month zips by in a flash as the month of May 2012 is almost over.  It was a hectic month for me, both on the work and non-work fronts.  Juggling my time between a new and challenging role at work, with the writings, blogs and the books that I've been working on was a stressful affair.  This month, I had the opportunity to visit Sanya on the island of Hainan in China for the first time and enjoyed the scenic views of the seafront as well as baked in the hot humid weather on the island. 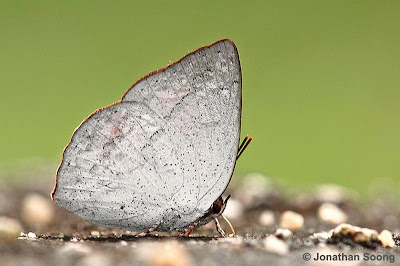 In my spare time, I was juggling writing and processing photos between two books - the soon-to-be launched Caterpillars of Singapore's Butterflies, which I co-authored with Horace Tan, and the short monographs that I was writing for Raffles Museums forthcoming Private Lives series, featuring the Rainforests of Singapore.  Fortunately, amidst a few heart-stopping moments, progress on the first book in Singapore featuring exclusively butterfly caterpillars went well with lots of help from NParks staff Rachel Lim, Ng Li-San and Cindy Ong. 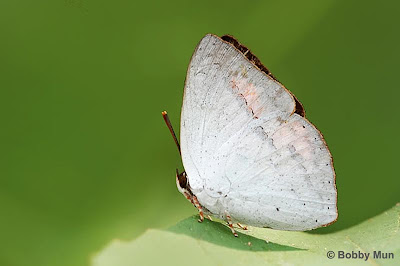 This weekend, the Caterpillars of Singapore's Butterflies will be launched at the Festival of Biodiversity.  ButterflyCircle will also be featuring our members' works at our booth.  Come join us and get your copy of the book and get the authors to autograph the book for you! 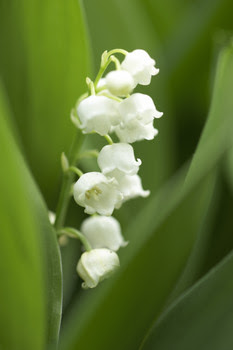 The flower of the month for May is Lily of the Valley (Convallaria magalis).  It is a small, bell shaped flower that gives off a large scent that attracts not only people, but bees that like to collect the pollen that the flower produces.  The flowers are normally white, with an occasionally pink hue. The flower is distributed throughout the northern hemisphere and first grows in the spring and creates six little stamens. The Lily of the Valley has some medicinal qualities to it. The leaves and petals have been used in medicine because they contain cardiac glycosides. 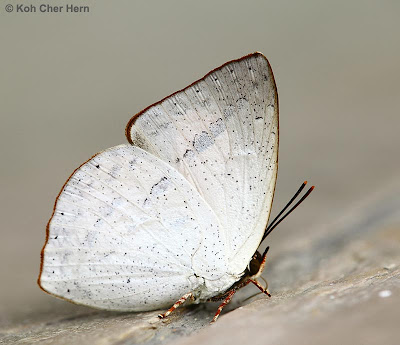 Our butterfly of the month is the diminutive but robust Malayan Sunbeam.  It is one of two species of the subfamily Curetinae that is found in Singapore.  A fast flyer, it often stops to bask with its wings partially opened.  Males of the species can sometimes be found puddling at damp sandy spots in the nature reserves.  It is widely distributed in Singapore, and is found as often in the forested nature reserves as well as in urban parks and gardens. 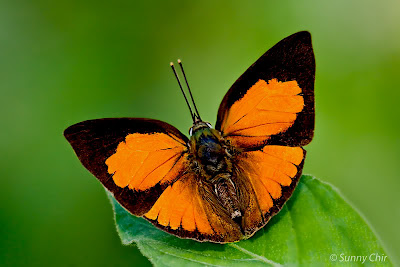 The Malayan Sunbeam is a bright coppery red above with a black border on both the fore and hindwings.  It is probably the bright orange-red upperside that suggested its common English name sunbeam.  The silvery-white underside has obscure light grey markings and is generally peppered with small black spots on both wings. 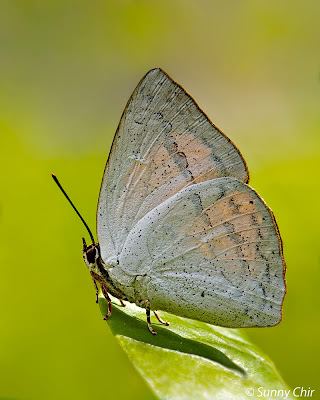 Usually, only individuals are observed flying at high speeds amongst bushes and up tree tops.  At certain times of the day, some individuals have a habit of perching on some favourite vantage points, returning repeatly to the same perches time and again, occasionally stopping with wings half opened to show its contrasting uppersides.  The species has red-banded legs. 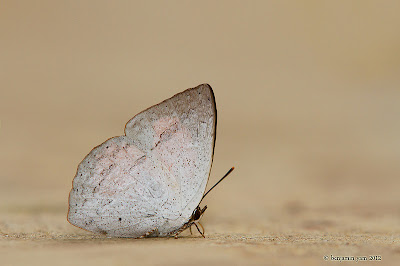 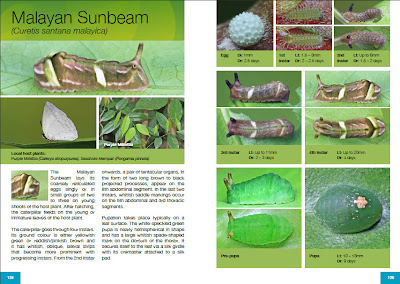 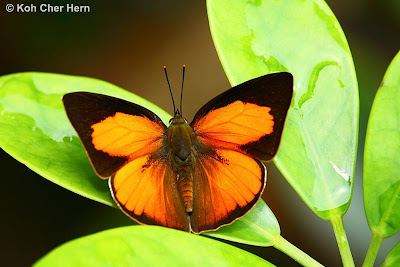 Over here in Singapore, the nature community and nature lovers look forward to the Festival of Biodiversity on 26 & 27 May where different nature groups come together to create a greater awareness of Singapore's biodiversity. 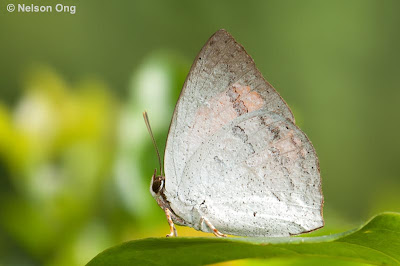 To quote my good friend Ria Tan who wrote in her very popular blog,  Wild Shores of Singapore, "Be bedazzled by butterflies and birds, awed by trees and seagrasses, tickle your curiosity with crabs and colugos. Singapore is wilder that you might imagine. Find out more about our biodiversity and what you can do to make a difference!"  See you at the Festival! 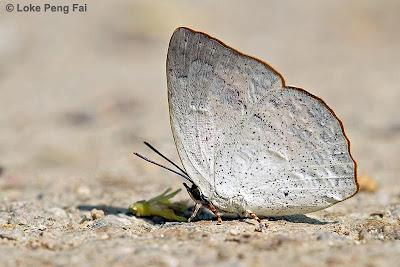 Love your butterfly photos and the blog, very educational.

Wow congratulations on your books! I think i see that butterfly here too in the Philippines, but i haven't seen it with wings wide open like in your photos. I got a shot once like in the first photo though.

I want a copy I willing to pay for the shipping and price
Anyone can help please reply to marihyana@hotmail.com

Hi Magia da Inês,
Thanks for the kind words. We are glad that you like our butterfly photography. :)

Hi Friend of HK,
Thanks for the kind words. :)

Hi Kalantikan,
Thanks for the congrats. The open-wing shots require certain element of luck and patience in getting that precise moment to snap. I am sure you will get yours in time to come. :)

Hi Allan,
Thanks for the interest in the book. We need to check with the distributor of the book on how to proceed with overseas orders. Will get back to you once we have the relevant info. :)

Sir, i am here again. Can you possibly look at my latest post or possibly ID what i posted. I am sorry but i also wanted to list all the species i see in our property, but I am not confident that i can identify them well, as i only compare them with internet photos.

Is a copy of this book still available for sale?

We are not involved in the sale of the caterpillar book but multiple feedback indicate the book is sold out at various bookstores.