Life History of the Acacia Blue 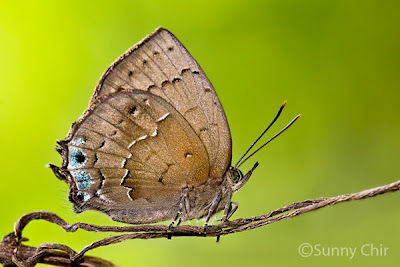 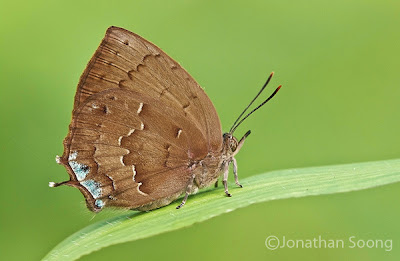 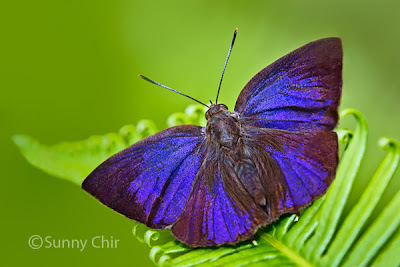 Above, the male is shining purplish blue with broad black apical border on the forewing and broad black borders on the costal and inner margins of the hindwing. The female is steely blue with thin black borders on both wings.  Underneath, both sexes are brown with an irregular dark brown post-discal line on both wings but with that on the hindwing outwardly edged with white. Both wings have a series of dark submarginal striae and a dark rounded submarginal spot is present in space 6 of the hindwing.  Both wings have a more obscure sub-basal series of dark striae  with the striae in space 7 of the hindwing inwardly edged in white. The hindwing has a white-tipped tail at vein 2, and a tooth at vein 3, both being longer in the female than in the male. There is an obscure dark tornal spot and another similar marginal spot in space 2 on the hindwing, with metallic bluish green scalings overlay these spots and covering the marginal/sub-marginal space between these two spots. 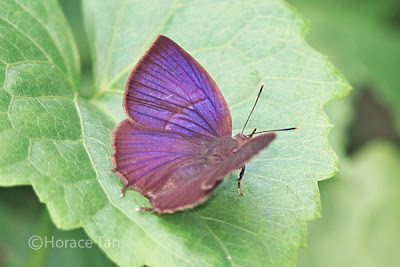 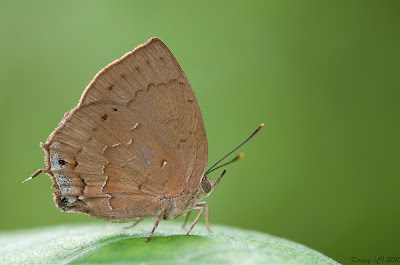 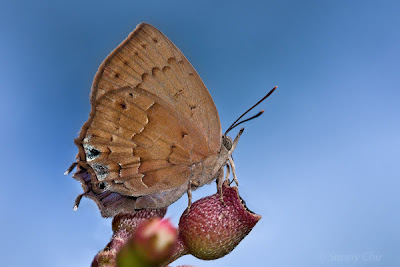 The Acacia Blue is relatively common in Singapore. The adults can be sighted in  forested areas within the nature reserves and wastelands, and occasionally in urban parks and gardens. They have a a rapid flight and can be observed to sun-bathe with fully open wings in sun-lit conditions. A good opportunity to photograph the skittish adults is when they visit the ripening fruits of the Singapore Rhododendron for their energy intake. The females are more likely to be seen in the vicinity of their host plants. 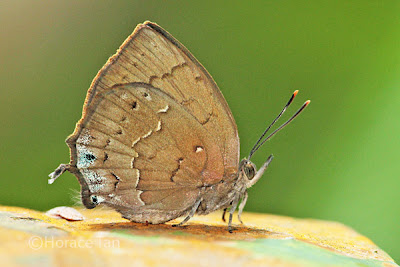 The immature stages of Acacia Blue are polyphagous. To date 5 plants in Leguminosae have been recorded as its local hosts. Caterpillars of all instars feed on young   leaves of the host plants, and are fond of imbibing nectary fluid from the glands occuring on the petiole and rachis of the host plants. In the field, the caterpillars live in association with ants visiting the same plants for nectary intake. However, in home breeding settings, the caterpillars have no problem reaching adulthood in the absence of ants. 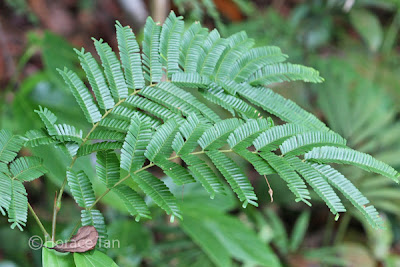 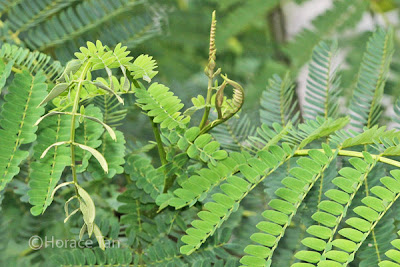 
Eggs are laid on the underside of a young leaf or other parts of a young shoot of the host plant. The egg is whitish with a green undertone and is about 07-0.8mm in diameter. It is shaped like a slightly flattened chinese bun with the surface is reticulated with interconnecting ridges which raise sharply at the intersections.  As is typical, the depressed micropylar is found in the polar region. 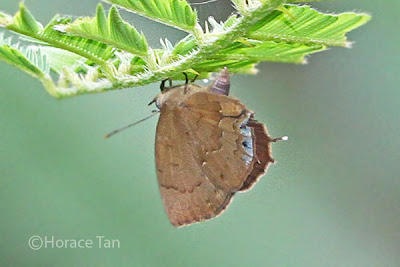 A mother Acacia Blue laying an egg on the underside of an Albizia leaf. 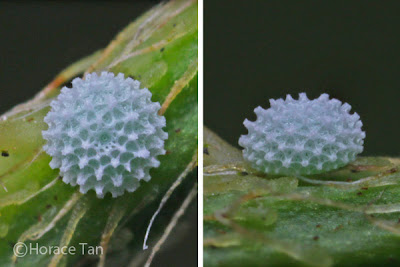 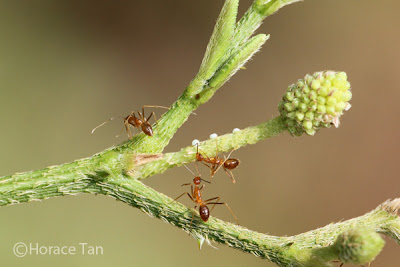 A young shoot of Mimosa pigra with 3 eggs deposited on the stalk of a flower bud. 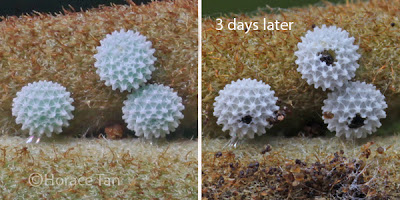 A group of three eggs over the span of four days, with those in the right panel have the polar part of the egg shells nibbled away by the soon-to-emerge caterpillars.


As the caterpillar feeds and grows, the body base colour becomes paler yellow with a strong green undertone. This instar lasts for about 3 days with the body length reaching up to 3mm. 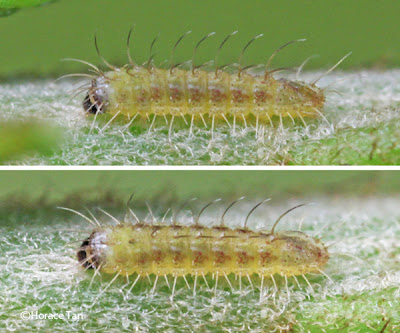 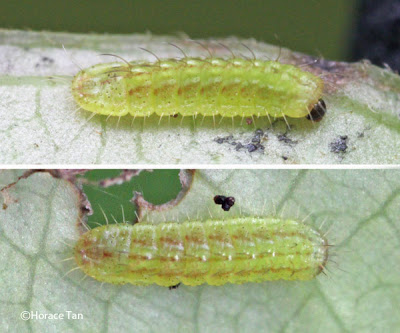 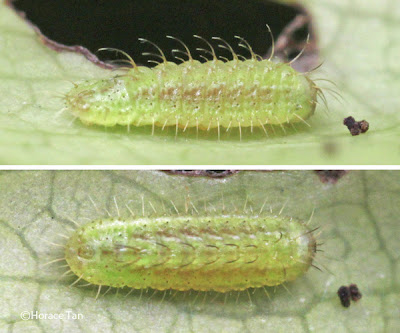 Two views of a 1st instar caterpillar, dormant prior to its moult, length: 2.5mm.


Covered with numerous short setae, the body of the 2nd instar caterpillar is  yellowish green with obscure white oblique stripes occurring laterally. The prothoracic shield is marked with two vertical dark stripes, and the head capsule has changed to a pale yellowish brown coloration. The dorsal nectary organ on the 7th abdominal segment and the tentacular organs on the 8th abdominal segment are now distinguishable. The body colour gradually loses the yellow tone and becomes much greener. The growth in this stage brings the caterpillar to a length of about 6mm, and after about 4-5 days in this stage, it moults again.

Two views of a 2nd instar caterpillar, early in this stage, length: 3.8mm. 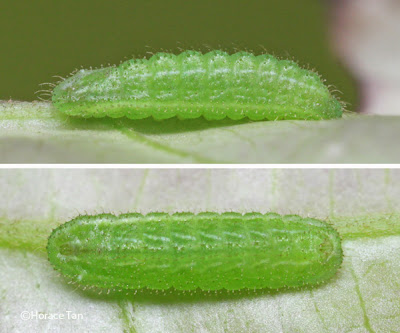 Two views of a 2nd instar caterpillar, late in this stage, length: 5.8mm.


The 3rd instar caterpillar resembles the 2nd instar caterpillar closely with minor changes observed. The oblique lateral stripes are now more prominent,  being more whitish and outlined with darker green than the base green colour. A faint dorsal band, in darker green, run lengthwise. The peripheral rim of the body is yellowish to whitish. Both DNO and TOs are now rather proiminent, with the eversion of the TOs readily observed. This instar takes 4-5 days to complete with the body length reaching about 12mm before the next moult. 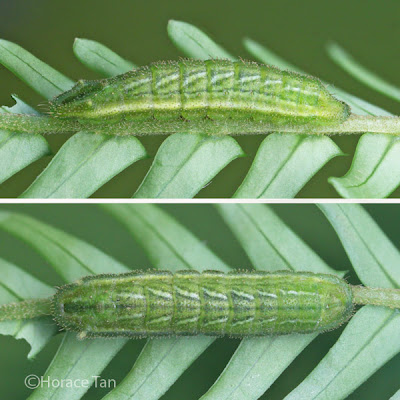 Two views of a 3rd instar caterpillar, late in this stage, length: 9.8mm. A 3rd instar caterpillar stationed next to the nectary gland of the host plant with ants in attendance. 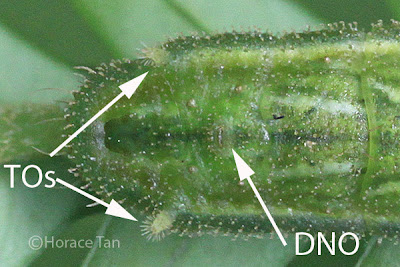 A close-up view of the posterior end of a 3rd instar caterpillar, showing the dorsal nectary organ (DNO) and tentacular organs (TOs).


The 4th instar caterpillar bear similar markings as the 3rd instar but with greater colour contrast throughout. The lateral white stripes are now broader and flanked with broader dark green stripes. The dark green dorsal band is also broader and more prominent.   This final instar lasts about 9-11 days with length reaching 20mm. 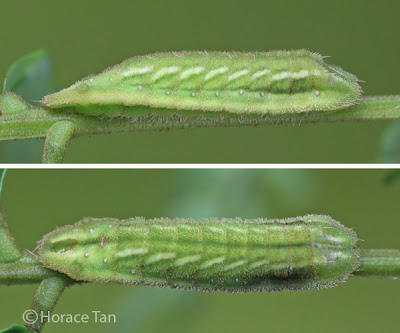 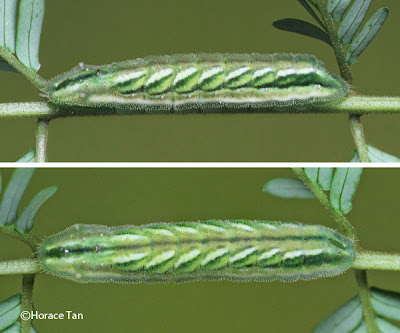 An ant attending to an Acacia Blue caterpillar. Note the eversion of the TOs at the 24th second mark. 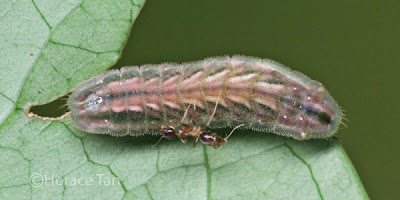 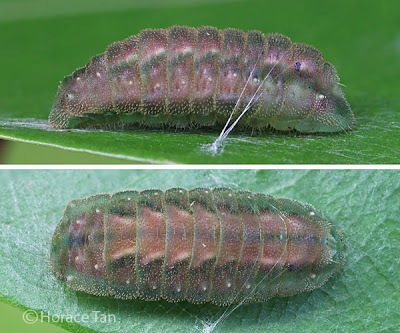 Two views of a pre-pupa of the Acacia Blue.


Pupation takes place after 1.5-2 days of the pre-pupal stage. The pale brownish pupa has the typical lycaenid shape,  and numerous irregular shaped dark brown to black speckles. Length of the pupa: 10-11mm.

An Acacia Blue caterpillar moults to its pupal stage. 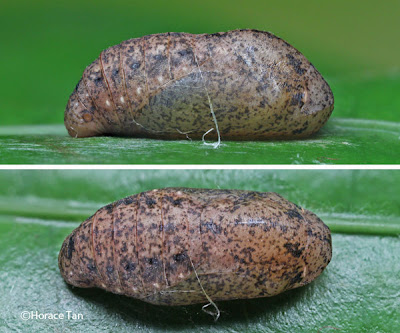 Two views of a pupa of the Acacia Blue.


7.5-8 days later, the mature pupa turns dark in the thoracic and wing case areas,  with bluish markings apparent in the wing case. The next day the adult butterfly emerges from the pupa 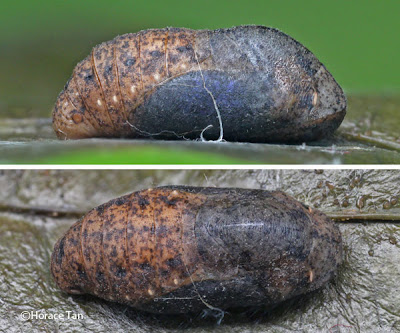 Two views of a mature pupa of the Acacia Blue. 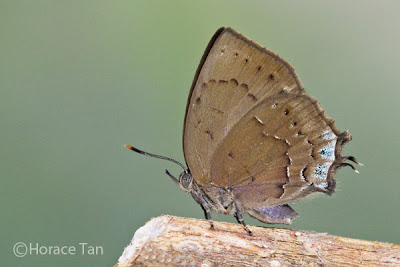 This is a superb blog. Hats off to you Horace.

Thanks, Simon and Tracey for the kind words. :)
I find your blog very interesting and informative too.

Really, your blog is great. I love butterfly. Have a nice day.

Thanks, Abeg for the kind words. :)
Agree with you that butterflies are beautiful and lovable creatures.