Murder in the name of Art??

Murder in the name of Art?? 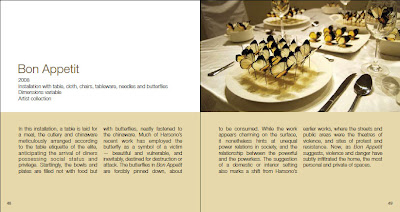 One of ButterflyCircle's members paid a visit to the Singapore Art Museum recently, and saw amongst the exhibits displayed, in the name of "art" was this supposedly delectable dining installation art, featuring dead butterflies titled Bon Appetit 2008. 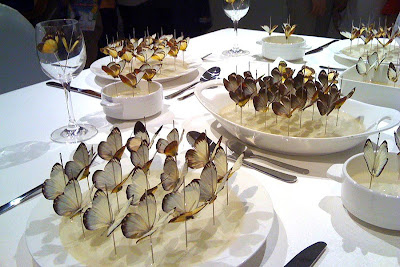 Most, if not all of our butterfly- and nature-loving community in Singapore would be outraged at this totally insensitive display, killing so many butterflies just so that some artist can make a statement? It is totally in bad taste, even as Singapore is celebrating the International Year of Biodiversity 2010 and priding ourselves in biodiversity conservation. Is this the message that we are sending out to the rest of the world - the hypocrisy and the duplicity that we are saying one thing, and then condoning exactly the opposite? 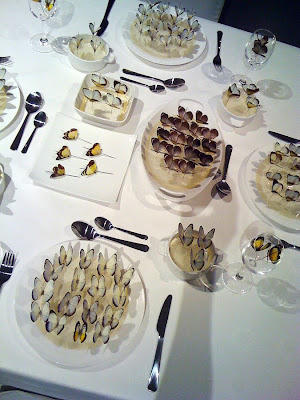 Does the artist, and even those people who are responsible for featuring this "work of art" realise that no living thing as gentle as butterflies deserves to die, just so that some people can partake of this demented orgy of what is considered art? Has Singapore's society degenerated into such abject decadence that we need to kill these beautiful creatures so that some people can appreciate this repulsive display that is even considered worthy of being featured at the Singapore Art Museum?
Even if the specimens are not real or farm-bred butterflies, the message sent to people viewing the exhibition is that "it is ok to kill beautiful creatures for human enjoyment". Butterflies are expendable, and that their lives can be forfeit for human 'enjoyment' - such as what is being displayed.
The metaphorical association with a gastronomic experience further emphasises that these are insects whose lives are not worth considering, and that they die for our pleasure. Whatever the artist explained about "the unequal power relations in society, and the relationship between the powerful and the powerless" is exactly what he is guilty of - that he has killed these innocent and harmless beauties in the name of art, by exacting his "power" over these poor defenseless creatures.
A totally sick and repulsive act of cruelty and senseless mass murder that reflects the demented and decadent mind of Man. I hope that the people in "power" at the Singapore Art Museum can think with some conscience, take stock of the message that this exhibit portrays and withdraw it immediately from public consumption.

Bon Appetit 2008
Installation with table, cloth, chairs, tableware, needles and butterflies. In this installation, a table is laid for a meal, the cutlery and chinaware meticulously arranged according to the table etiquette of the elite, anticipating the arrival of diners possessing social status and privilege. Startlingly, the bowls and plates are filled not with food but with butterflies, neatly fastened to the chinaware. Much of Harsono’s recent work has employed the butterfly as a symbol of a victim — beautiful and vulnerable, and inevitably, destined for destruction or attack. The butterflies in Bon Appetit are forcibly pinned down, about to be consumed. While the work appears charming on the surface, it nonetheless hints at unequal power relations in society, and the relationship between the powerful and the powerless. The suggestion of a domestic or interior setting also marks a shift from Harsono’s earlier works, where the streets and public areas were the theatres of violence, and sites of protest and resistance. Now, as Bon Appetit suggests, violence and danger have subtly infiltrated the home, the most personal and private of spaces.
Text by Khew SK ; Photos by a BC member

No animal no matter how small should be hurt for the sake of Art.

If SAM condones killing animals for Art, then where does an artist cross the line?

How about hamsters? Is that okay? Many many skinned hamsters? To show how cruel society is, by simply repeating that cruelty in Art?

No animal should have to die for Art.

Harsono's work is disgusting and sick and he is exactly the people he tries to slime.

The complicity of Singapore Arts Museum in the tacit approval of such senseless killing of insects in the name of art is appalling!

It also speaks volume of the Museum's nature conservation education, which is totally out of step with the image we are projecting to the world

Please right what is wrong before the world have a laugh at the hypocrisy of it all!

This really leaves a bad taste in the mouth. SAM should not have endorsed and support such an insensitive act.

No living thing big or small should be sacrificed in the name of ART or for any other matters.

All living things have equal rights to be in this universe and humans (supposedly the higher beings?!?!?!?) does not have any rights to eradicate them from their natural environment!

There was a similar art display at the Esplanade in January, featuring thousands of seashells. My Flickr set showing the sheer number of shells can be seen at this link.

I was horrified and quite disgusted.

They value what they believe and perceive as right through the notion of egoism where the act of self-interest supersedes the rest. As long as the ends justify the means, it is fine with them. An act of unethical and immoral behaviour - the notion that overwrites what was displayed, art.

Art do not condone killing, for such a display, violated subjectivity and humanity. According to Roger Fry (cited in Leo Tolstoy), ‘art is the transmission of an emotion felt by the artist marks “the beginning of fruitful speculation in aesthetics” It seems to suggest an observation done and portrayed to an artist creativity on subject matter. However, before portraying, shouldn’t one consider ethics on such ground? This is why funding/allowing engineers to work on them created machines of mass destructions. This is where our forefathers were part of the system, part of where people have long forgotten that we still possess the fundamental value of humanity. We can use what we’ve learn to enhance our environment or we can use them to kill others, and in this case, it shows how man being the better beast, kills in the name of art; forgetting the fundamentals of the basis of art or was the subject portraying the art of killing?
Subject has failed on many grounds and should unlearn, learn and relearn the fundamental of what art truly is.

now i believe his statement is loud and clear...
and he shld be the first one to do the soul searching

A sad day for butterfly lovers in Singapore. No matter how humane these creatures are put to their death. It sure doesn't bring across the right signal to the audiences especially the young ones. And how are we supposed to embrace, support and educate efforts to our biodiversity conservation when even SAM is allowing such act of cruelty.

Art should be treated with respect living or dead. And if this is what art is, it is a distasteful one for Nature lovers.

i saw this yesterday too and there's a huge art piece with dead bees as well... i was very disappointed and outraged by this! I'm also glad that this blog has aired my sentiments on this subject.