As the dust settles over the furore over the installation art piece at the SAM, members at ButterflyCircle continue to discuss the inappropriateness of the dining table setting in which killed butterflies were featured. It was a time of soul-searching and also wonder at the passion with which the nature-loving community had responded to the ironical work of "art". I'm sure that if the artist had portrayed some dead kittens (not that I'm suggesting it to him for his next project!), the response from the Cat Welfare Society in Singapore would not have been any less passionate and emotional. 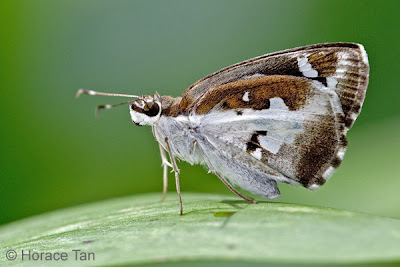 Everyone will have his or her point of view, and is definitely entitled to their opinion as to what constitutes "art". But the message to artists like FX Harsono would be that they should strive for a "zero harm" philosophy (as far as Mother Nature's creatures, big and small, are concerned) in their attempts to portray their esoteric artistic theories to "lesser" mortals. 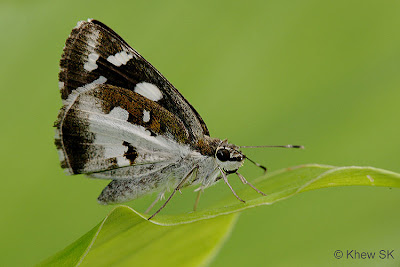 The article and video clip at ChannelNews Asia shows the interview of ButterflyCircle member Sunny Chir, the Director of SAM and a few others. We thought that the Director, being a senior official of a public institution, would have done his research on butterflies and some basic entomological sciences more carefully before appearing on National TV and looking rather ill-informed, merely based on what the artist tells him.

Of Demons but no Dungeons 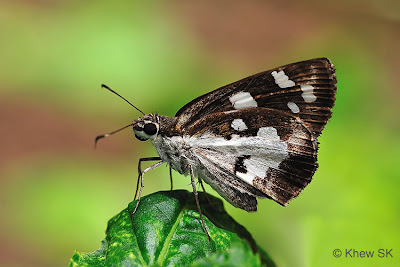 This month, Singapore saw a change in the dry weather from the preceding two months, with the intermonsoon rains bringing much relief to the hot spell. New growth in flora will be good news for our butterfly friends. Here, we feature a species of the Hesperiidae, or Skipper family for April 2010 - the Grass Demon (Udaspes folus) 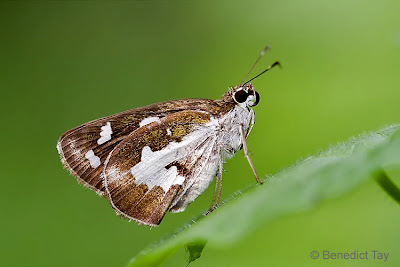 The Grass Demon (Udaspes folus) is more often seen in urban areas than in the nature reserves. A relatively large skipper with a wingspan of 50mm, the butterfly is dark brown on the upperside with white spots at patches on both the fore and hindwings. 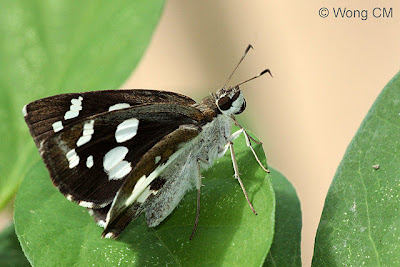 The underside is paler, a rusty brown with more extensive white patches, particularly on the hindwings. The underbelly of the butterfly is whitened whilst the antennae has a white patch just after the apiculus. 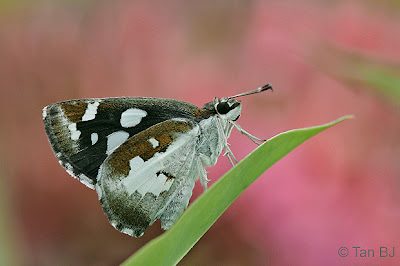 The skipper is usually active in the early morning hours of the day, flitting amongst the low shrubbery in search for nectar from flowers. It is a fast flyer, like most skippers, and can zip off at tremendous speeds when disturbed, showing just a fleeting flash of white as it takes off to safety. 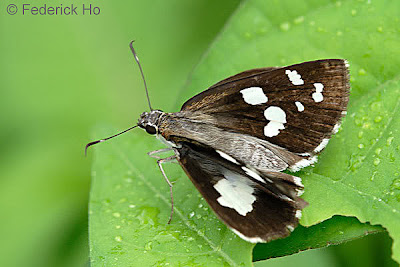 It is usually found in urban gardens where its preferred host plants - various species of the ginger family and in particular, Turmeric (Curcuma domestica) is cultivated. The butterfly is usually found singly, and likes to perch at a few choice spots where it opens its wings to sunbathe in the typical skipper fashion - forewings held at an angle with the hindwings opened flat. 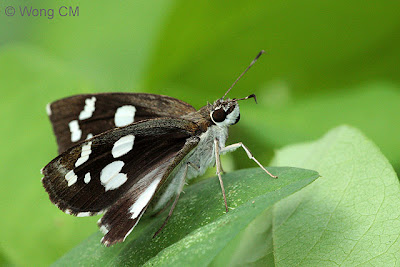 A visit to the various herb gardens where the Turmeric grows would be a good choice if one wants to look for this species. Places like Pasir Ris Park Kitchen Garden, Bishan Park Herb Garden and the Herbs and Spices Garden at Fort Canning Park would be ideal locations where the Grass Demon is often seen. 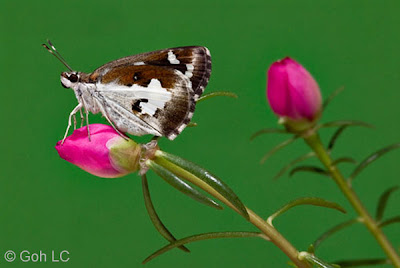