Life History of the Grey Sailor 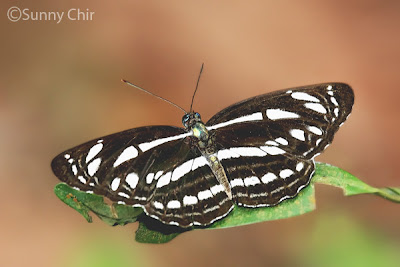 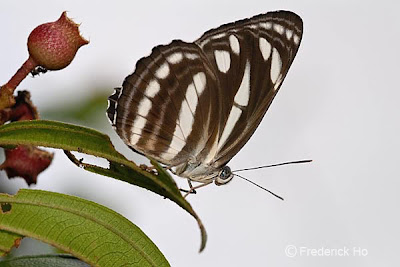 A Grey Sailor perching on a leaf of the Singapore Rhododendron. 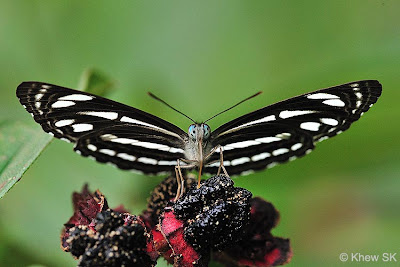 A frontal view of a Grey Sailor enjoying the ripen fruit of the Singapore Rhododendron.

Physical Description of Adult Butterfly:
On both wings the cells are open, and vein 8 on the hindwing ends on the costa. Above, the wings are dark brown to black with white markings as seen in Athyma spp. On the forewing, there is a cell streak with a triangular spot lying beyond. Post-discal spots in spaces 2 and 3 are in echelon. The discal band on the hindwing does not reach the costa. Underneath, the wings are greyish brown with similar markings as on the upperside. The hindwing has a subbasal streak passing through base of cell and continued below vein 8, and a basal streak passing along costa but not reaching vein 8. The dorsum of the abdomen has a small white band aligned with the hindwing discal band. 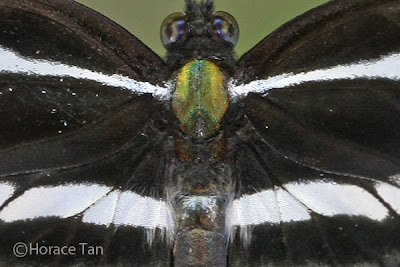 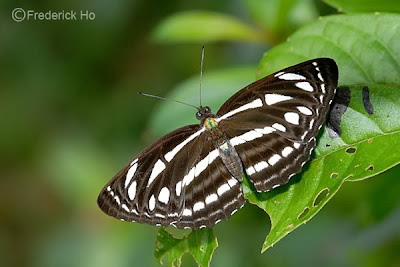 A Grey Sailor sunbathing on a perch in the nature reserve. 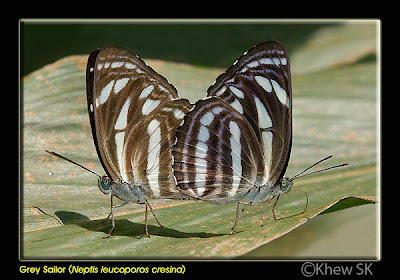 A mating pair of the Grey Sailor sighted on a perch under the mid-day sun.

Field Observations of Butterfly Behaviour:
This species is common in Singapore especially in the nature reserves where the host plants are rather widespread. The sun-loving adults are often observed gliding in a "sailing" fashion that gives the origin to the common name "sailer/sailor" for members of this genus and related genera. The adults also visit flowers and ripening fruits for energy intakes. 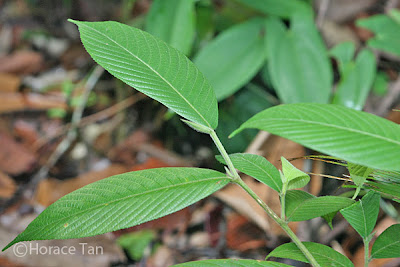 Early Stages:
The caterpillars of the Grey Sailor feed on the young to middle-aged leaves of various Gironniera spp. They typically feed in the open on the leaf surface, and rest on the midrib between feeds. The lamina of each leaf is usually eaten from the tip, leaving the midrib uneaten. But unlike the Athyma spp., there is no attempt to construct frass chain or frass barrier. There is no attempt to attach pieces of cut lamina to the midrib as in the case of some Lasippa spp. 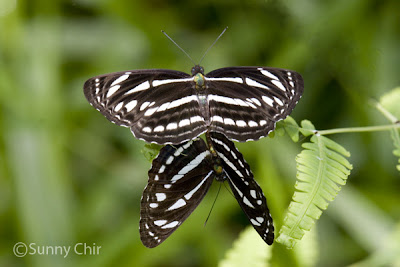 Another mating pair of the Grey Sailor perching on a fern leaf. 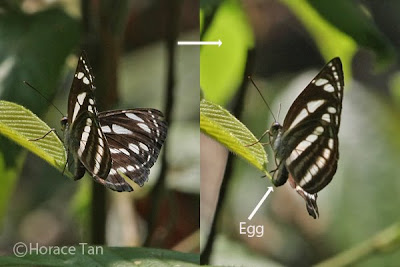 A female Grey Sailor ovipositing an egg at the leaf tip of its host plant.

The eggs of the Grey Sailor are laid singly at the tip of a leaf on the host plant. The ovipositing female shares the same ovipositing routine with quite a few Nymphalidae species: After landing on a leaf and finding it suitable, the female reverses along the leaf surface, typically along the midrib, until its abdomen tip reaches the leaf tip, and there it deposits an egg. 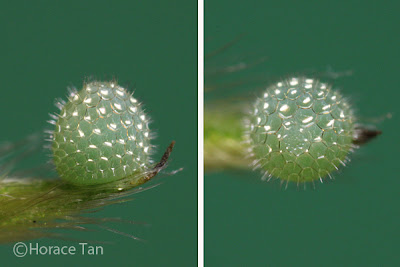 The eggs are somewhat globular in shape, with surface marked with hexagonal pits and bearing spines at pit corners, giving them the appearance of minute sea-urchins. The micropylar sits atop. Freshly laid eggs are green in colour, but turning pale green and then yellowish green when maturing. Each egg has a diameter of about 1.1mm. 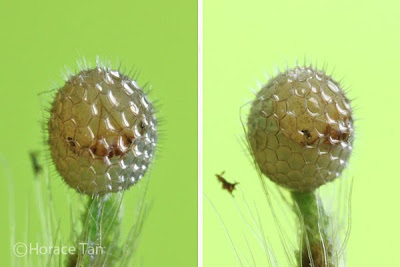 Two views of a mature egg. The head and mandibles are visible.

The egg takes about 2.5-3 days to hatch. The young caterpillar emerges by eating away part of the egg shell. The rest of the egg shell becomes the first meal for the newly hatched, which has a cylindrical pale green body covered with many small tubercles and short setae. The head capsule is pale brown in color. 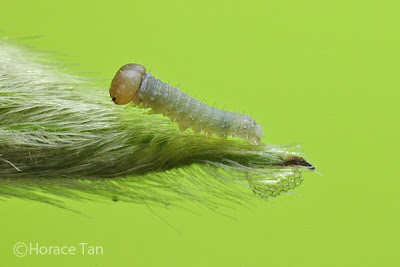 As the caterpillar grows, the body turns increasingly green in base colour, and small tubercles turn yellowish green to whitish in coloration. Three pairs of subdorsal tubercles becomes much larger and prominent on the 2nd and 3rd thoracic segments, and the 8th abdominal segment. After reaching about 5.0mm in 2 days, the caterpillar moults to the 2nd instar. 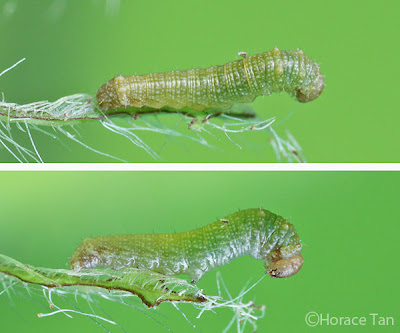 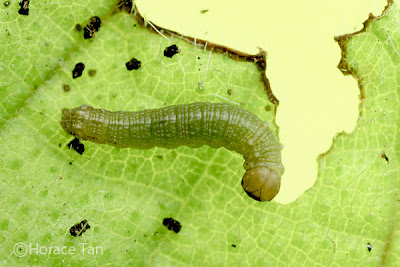 A 1st instar caterpillar of the Grey Sailor feeding on leaf lamina.

The body color of the 2nd instar caterpillar is yellowish green with a series of lateral oblique streaks and a faint dorsal band. Besides tiny tubercles covering most of its body surface, the 2nd instar caterpillar also features longer white-tipped spines on the 2nd and 3rd thoracic segment and the 8th abdominal segment. The dorsum on the thorax and the sides of the 6th-8th abdominal segments are shaded in light to dark brown. The head capsule is light brown and dotted with a number of whitish conical tubercles with a longer and more pointed apical pair. This instar lasts about 2 days with the body length reaching about 9mm. 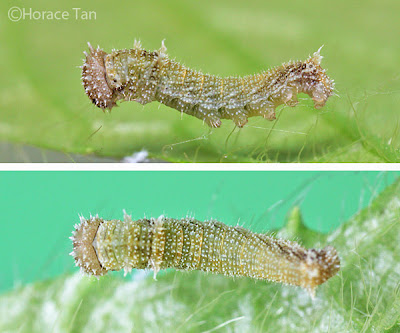 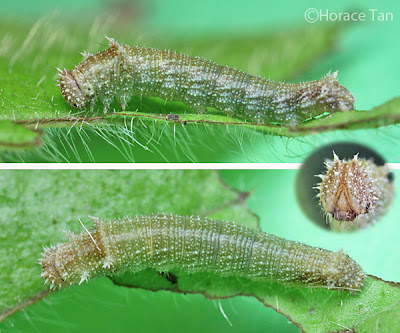 Two views of a 2nd instar caterpillar, late in this stage, length: 8.2mm

The 3rd instar caterpillar has similar body markings as the 2nd instar with the following changes: The subdorsal spines are much longer and featuring prominent branches, with the pair on the 3rd thoracic segment much longer than the other two pairs. Its head capsule is longer vertically, featuring dark lateral and median stripes with the earlier apical spines now longer, more pointed and black on the front surface. This instar takes about 2 days to complete with body length reaching about 15mm. 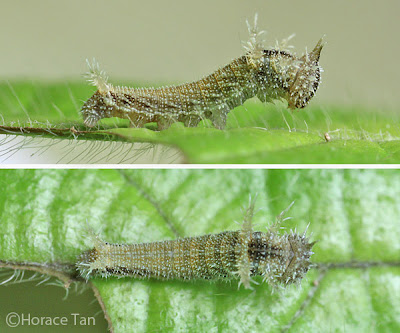 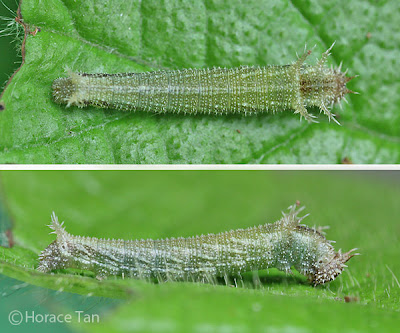 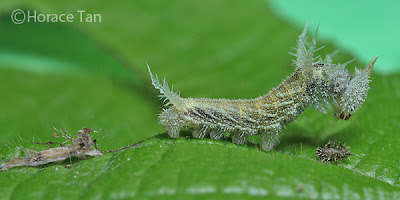 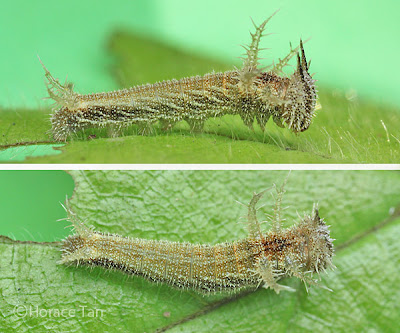 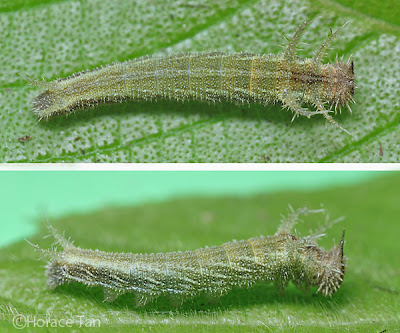 The 5th instar caterpillar is little changed from the 4th instar in all body markings and features. 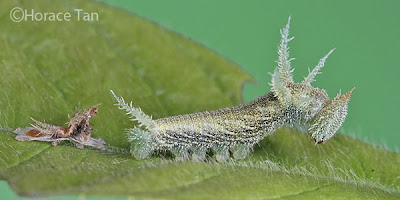 A new moulted 5th instar caterpillar of the Grey Sailor.

One noticeable change is in spines and horns on the head capsule which are now proportionally shorter. 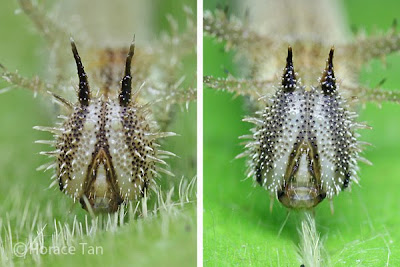 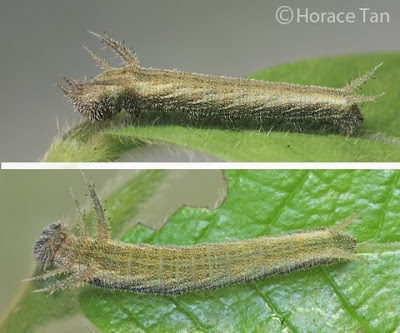 Two views of 5th instar caterpillar, lengths: 22mm (top) and 25mm (bottom).
The 5th instar lasts for about 4 days, and the body length reaches up to 30-32mm. On the last day, the color of the body and the spines changes to pale/pinkish brown. The caterpillar ceases feeding and wanders around. Eventually it comes to a halt on a leaf underside, where the caterpillar spins a silk mound on the midrib from which it soon hangs vertically to take on the pre-pupatory pose. 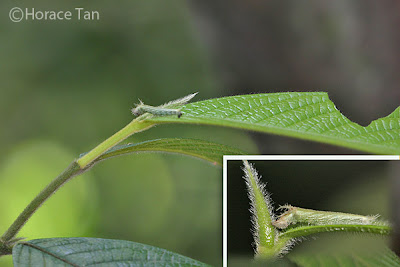 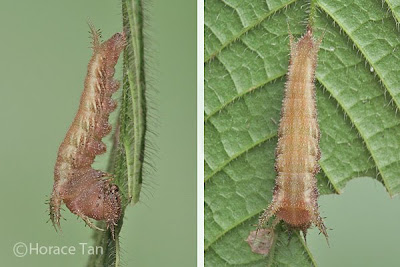 Two views of a pre-pupa of the Grey Sailor.

Pupation takes place a day later. The pupa suspends itself via a cremastral attachment to the silk mound with no supporting silk girdle. It is almost entirely pale pinkish brown in color. The abdominal segments are slender. The thoracic portion being larger with wing cases dilated laterally. The dorsum of the thorax is angular. The head is bluntly cleft at its front edge with small pointed lateral vertices. Length of pupae: 16-17mm. 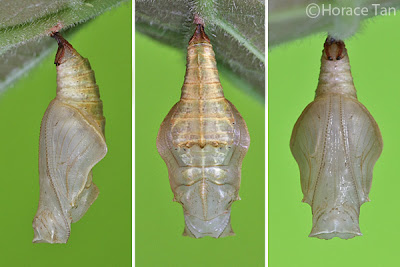 Three views of a pupa of the Grey Sailor.
After about 5 days of development, the pupal turns dark as the development within the pupal case comes to an end. The spots and streak on the forewing upperside also become discernible. The following day, the adult butterfly emerges from the pupal case. 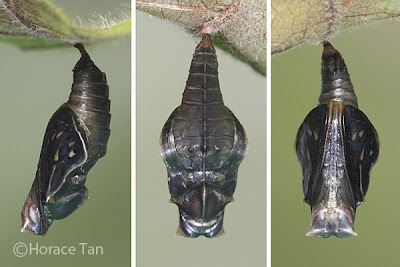 Three views of a mature pupa. White markings on the forewings are now visible. 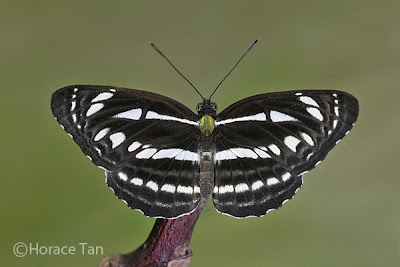 A newly eclosed Grey Sailor, proudly showing us its upperside.