Life History of the Fluffy Tit 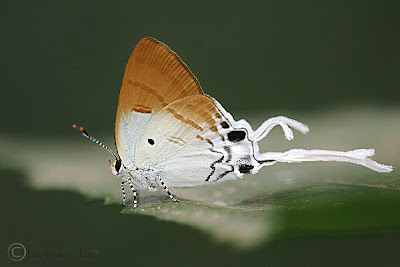 Butterfly Biodata: Genus: Zeltus de Nicéville, 1890 Species: amasa Hewitson, 1865 Subspecies: maximinianus Fruhstorfer, 1912 Wingspan of Adult Butterfly: 28mm Caterpillar Host Plants: Clerodendrum laevifolium (Verbenaceae) Physical Description of Adult Butterfly: Above, the male is mostly black but pale azure blue on the baso-dorsal area of the forewing and the whole of the hindwing minus the apical area. It has the appearance of a deep lustrous purple in a side light. The female is pale brown and has whitish tornal areas on the hindwings marked with black marginal spots. Beneath, both sexes are white with apical areas on both wings shaded ochreous brown, more broadly so on the forewings. The cell-end bars are darker ochreous brown, and each wing has a narrow post-discal line and an obscure submarginal line. Each hindwing has a small black spot at base of space 7, a large black spot in space 2 and another on the tornal lobe. There are two pairs of white tails with the pair at vein 1b rather long, about twice as long as the pair at vein 2. 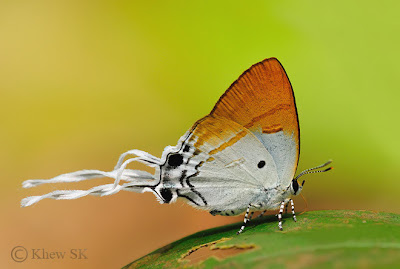 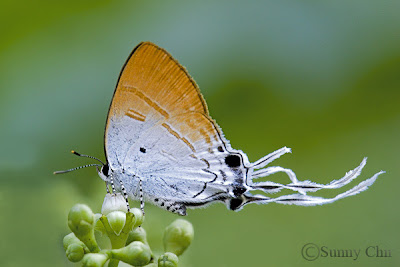 Another Fluffy Tit visiting flowers of Leea indica in the nature reserve Field Observations of Butterfly Behaviour: This species is relatively rare in Singapore. Sightings are typically made in localities where its host plant is growing. Encounters with the adults typically take place in brightly-lit condition at the fringe of the forest or alongside trails in both the catchment reserves and Southern Ridges. The adults flits around very actively, and elegantly with its long white tails twirling behind. Males have been observed to puddle on forest floor. 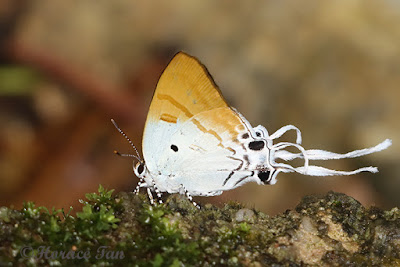 Early Stages:
The host plant, Cleorodendrum laevifolium, is a shrub or small slender tree with lanceolate-elliptic or oblong leaves of length 5-15cm. Locally, this plant is rather common in the Central Catchment Nature Reserve and the Southern Ridges. The flowers occur in slender cymes and have pale yellow corolla. Fruits are initially green but turned black when ripened. The early stages of the Fluffy Tits feed on all parts of the flower including the tender pedicles (flower stalks). 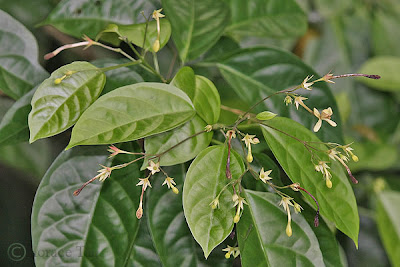 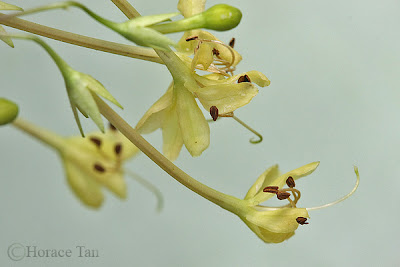 Flowers of the host plant 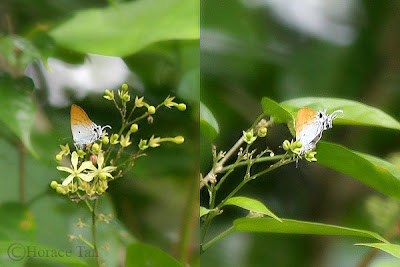 A mother Fluffy Tit ovipositing on the flowers of the host plant in the nature reserves.

Eggs are laid singly on a flower bud, the calyx or pedicle of a flower of the host plant. Each egg is light green in color, small and circular with a slightly depressed micropylar. The surface is covered with hexagonal pits which have tiny lumps littering the pit floor. Diameter: 0.7mm. 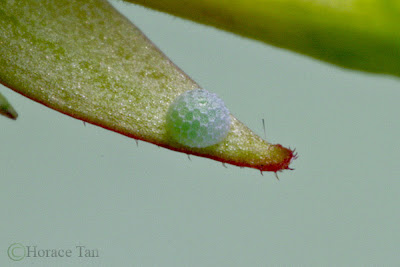 An egg of the Fluffy Tit laid on the calyx, about 0.7mm in diameter.

Three days later, the egg hatches with the young caterpillar eating away the upper portion of the egg shell to emerge. Measured at a length of about 1mm, its pale yellow body is cylindrical in shape, sporting long setae (hairs) and a yellowish brown head capsule.

A newly hatched caterpillar pausing next to its empty egg shell. 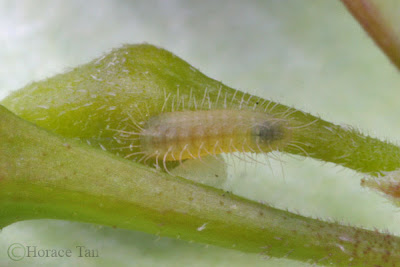 The 1st instar caterpillar starts feeding on the flower buds and other tender parts of the flowers in the vicinity. As it feeds and grows, it gradually takes on a light greenish coloration. 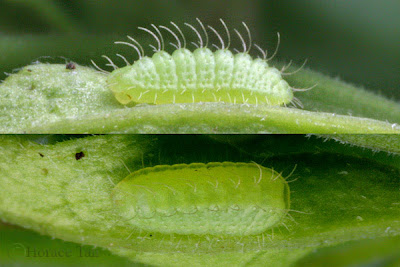 Two views of a 1st instar caterpillar, late in this stage, length: 2mm

After 2-3 days of growth and reaching a length of about 2mm, the caterpillar moults to the next instar. Numerous short setae cover the caterpillar body which has taken on a woodlouse shape. It has a yellowish green body color with a faint pinky undertone. In contrast to the features-rich adults, the early stages of Fluffy Tit are all rather unremarkably plain in appearance. Caterpillars in subsequent instars will look rather similar to the 2nd instar caterpillar with only minor changes in appearance. 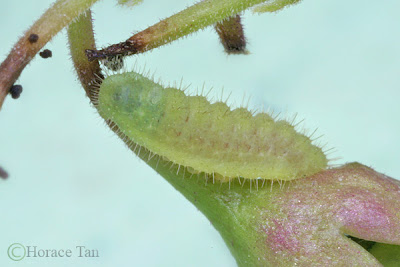 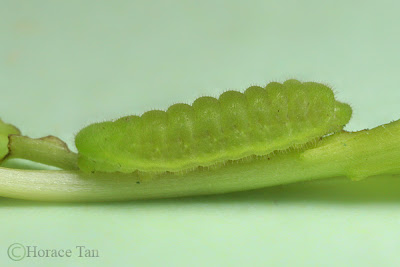 3rd instar caterpillar, length: 8mm The 4th (and final) instar caterpillar still has the same general appearance as the earlier two instars, but now the dorsal nectary organ on the 7th abdominal segment has become rather prominent. 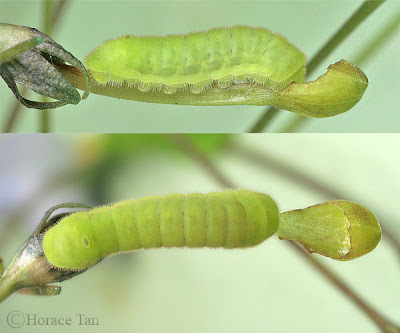 Two views of a 4th instar caterpillar dining on a flower bud, early in this stage, length: 10.5mm. Note the dorsal nectary organ on the caterpillar in the bottom picture. 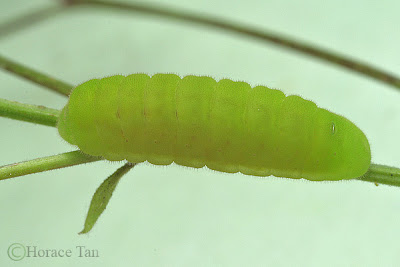 After 2.5 to 3 days of growth and reaching a maximum length of around 16mm in the final instar, the body of the caterpillar gradually shrinks. Soon the caterpillar seeks out a spot on the surface of an adjacent leaf to station itself. At this site, it enters the pre-pupatory phase where it readies itself for pupation by spinning a silk girdle and a silk pad. The caterpillar secures itself to the silk pad via claspers on its posterior end. 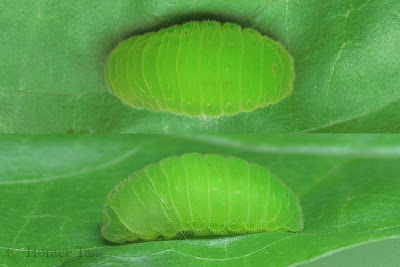 Two views of a pre-pupa of the Fluffy Tit, showing a finished silk girdle securing the pre-pupa to the leaf surface. Pupation takes place after 1 day of the pre-pupa stage. The pupa has an interesting shape which is broadened sideway, quite unlike the typical elongated shape for most Lycaenid species. It is greenish in color with two yellowish green dorsal patches, one on the thoracic segments and the other on the abdominal segments. The thoracic has a pair of small brown dots, whereas the abdominal patch has two rows of such dots. The pupa has a length of about 8mm and a width (taken at the broadest part) of about 5.8mm.

An animated pupation sequence for a Fluffy Tit caterpillar. The actual process lasts about 10 minutes. 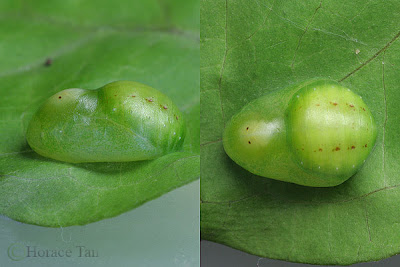 Two views of a fresh pupa of the Fluffy Tit. Six days later, the pupa becomes darkened in color signaling the imminent emergence of the adult. The next day the adult butterfly emerges from the mature pupa. 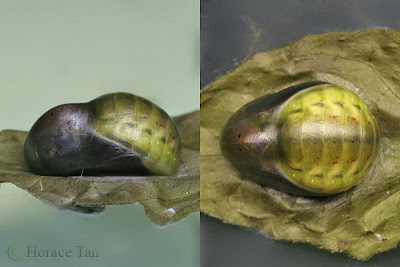 Two views of a mature pupa of the Fluffy Tit 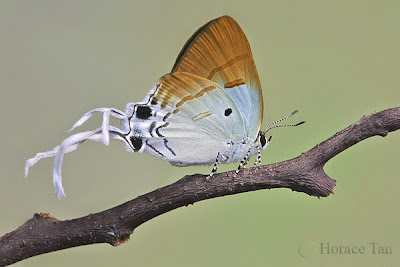 what a striking species.

Joe,
Agreed. This species has also become a sought-after item (for photo taking) for some ButterflyCircle members.