Butterfly of the Month - October 2008 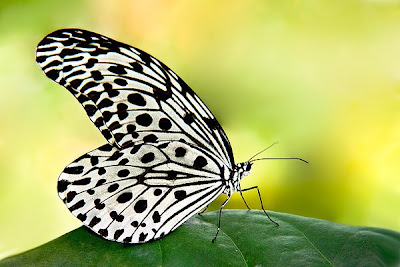 Four species of the genus are known to exist in Malaysia and Singapore, although only two - the Common Tree Nymph (Idea stolli logani) and the Mangrove Tree Nymph (Idea leuconoe chersonesia) occur in Singapore, the latter being extremely rare and confined to mangrove environments. A subspecies of Idea leuconoe is featured in Butterfly Parks in the region, but this is the subspecies clara, originating from Taiwan. 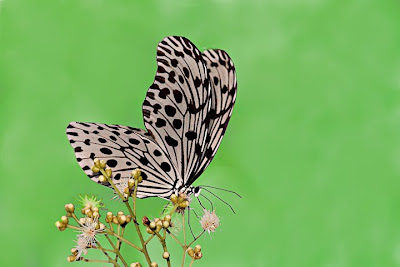 The Common Tree Nymph is not uncommon in the forested areas of Singapore, usually seen singly gliding at treetop levels, or in numbers whenever there is a flowering tree. It is always a show-stealer when it appears, often drawings gasps of admiration and awe as it floats effortlessly by, and flaps its wings in an unhurried manner as it glides past. 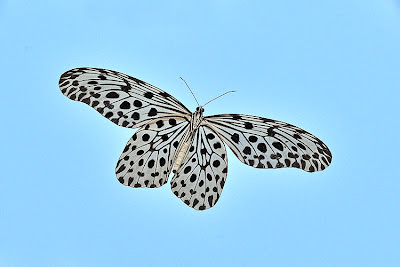 The Common Tree Nymph measures about 160-180mm wingtip to wingtip, with the female being the larger of the two sexes. The males, when alarmed or handled, will extrude a pair of bright yellow hair pencils.
When the butterflies appear during periods of flowering of some forest trees, e.g. the Syzygium spp., they will feed in the early hours of the morning, and continue to fly around the flowering trees throughout most of the day. It is during this slow flying and gliding periods that photographers have good opportunities to shoot in-flight shots of these magnificent butterflies - something that is not often (nor easily) done in butterfly photography. 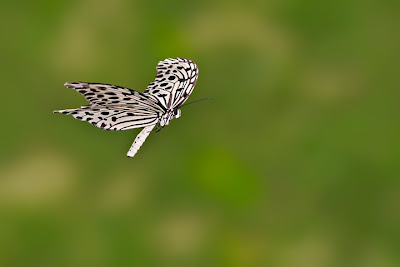 Also, after gorging themselves with nectar from flowering trees and shrubs, the Common Tree Nymph is very often spotted in the low bushes, resting in the shade with its wings either opened flat, or closed.

The Malays refer to the Common Tree Nymph by its local name - "surat", no doubt on account of the manner in which they float amongst the tree tops like a piece of paper at the mercy of the wind. However, if alarmed or disturbed, these butterflies can make off in a very capable fashion. 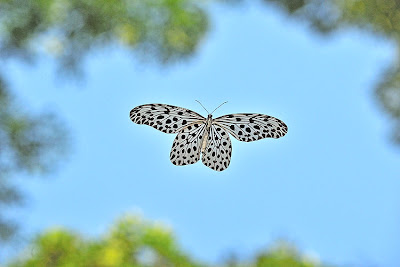 What a beautiful specimen!

Thanks, Joe. This species is always a show-stealer whenever it appears!

this is an incredibly beautiful blog! So thankful i found it and it also helped me to identify one filmed at Butterfly World in Florida!