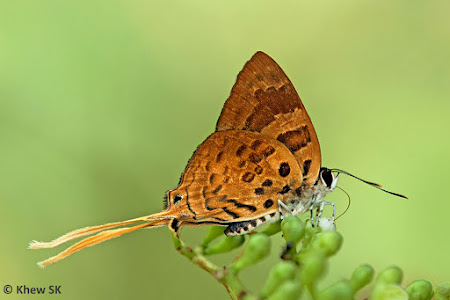 
This weekend's blog article continues with Part 2 of Singapore's Long-Tailed Hairstreaks. In Part 1, we were introduced to three of the seven long-tailed Theclinae of Singapore - the Branded Imperial, the Common Imperial and the Fluffy Tit. In this second and final part, we feature the remaining four butterflies which possess spectacular long tails, which are, on average, more than 10mm in length. 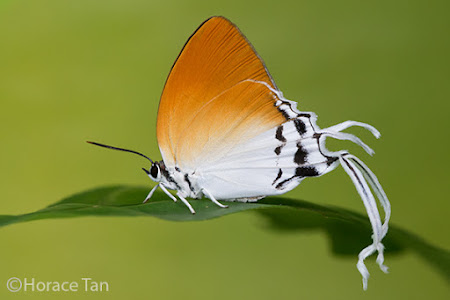 A female Grand Imperial showing off its long tails


We hope that in featuring these long-tailed beauties, we will whet the appetites of our Hong Kong butterfly-watching friends to visit Singapore more often to look for these species to add to their photographic collections of butterflies around the world! However, some of these species are rare and inhabit Singapore's forested nature reserves. They are rarely seen in urban parks and gardens, and prefer the sanctuary of our shaded forests, hence a butterfly-watcher will have to be quite determined to look for them in their preferred habitats. 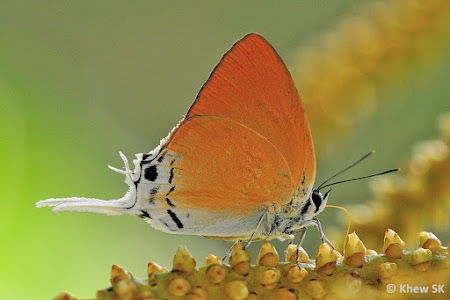 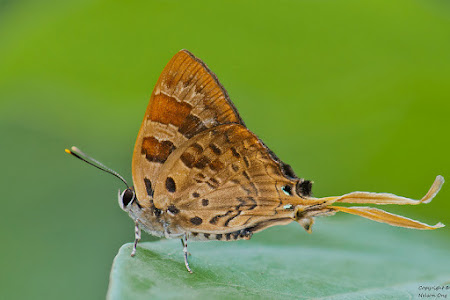 A male Plane perches on a leaf


The Plane was re-discovered some time in the late 1990's and reinstated to the Singapore Butterfly Checklist. Typically a forest-dwelling butterfly, the Plane is distinctly sexually dimorphic in that the male and female of the species appear so different as to suggest that they are two completely different species. In terms of sightings, males outnumber female sightings by at least 20:1. Both sexes are rare and appear to be seasonal. The male sports a long yellow tail at vein 2 of the hindwing. The upperside is a deep black-brown with the apical area of the forewing marginally lighter. The hindwing tornal area is yellow, with large black spots.  The female is a reddish brown above with large black spots at the whitened tornal area. The underside of the male is an ochreous buff with reddish-brown markings and stripes. The female is white with orange apical area and bands on the forewing. 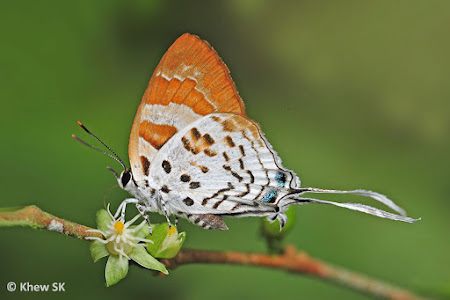 The rarer female Plane feeding on a flower in the forest


Both sexes are usually spotted when feeding on the flowers of forest trees and shrubs. A favourite is the flower of the Bandicoot Berry (Leea indica). The caterpillar of the Plane is believed to feed on the fruits of Salacia sp. Observations of the species, particularly the males, are typically around mid-day on hot sunny days. On average, the tail of the male Plane measures about 20mm from the tornal origin to the tip of the tail. 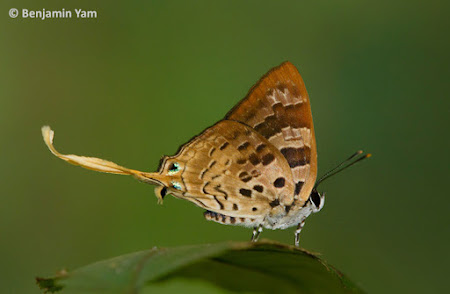 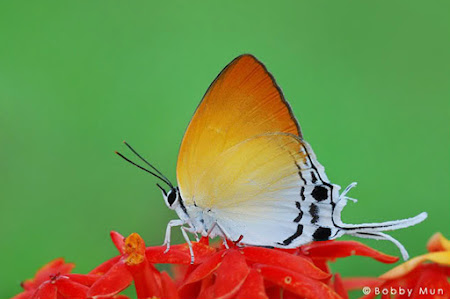 The remaining three long-tailed hairstreaks to be featured share a common English name of "Imperial". Indeed, when encountered in the forests, there is often something very "imperialistic" about these butterflies when they fly elegantly with their tails trailing behind them. The Green Imperial is usually spotted at the fringes of the nature reserves, usually feeding on flowering plants or, in the case of the female, fluttering around its caterpillar host plant. 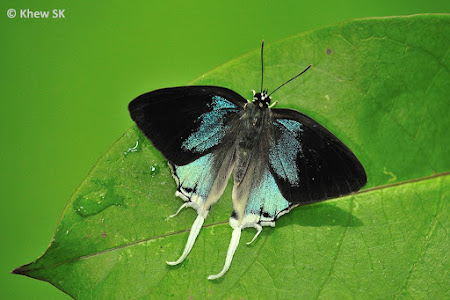 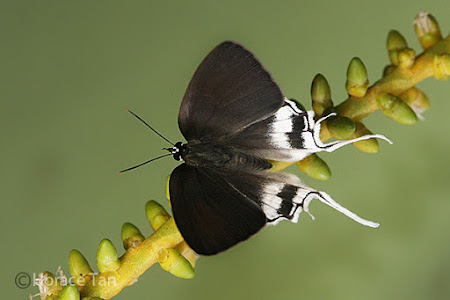 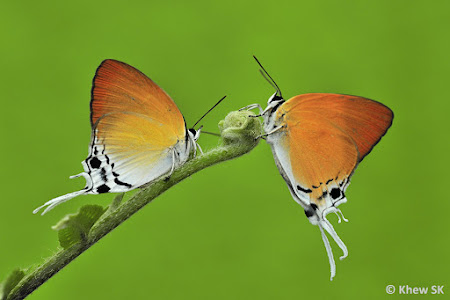 
The species is fast-flying but sometimes stops to rest to sunbathe with its wings opened flat. There is a second short stubby tail at vein 3 of the hindwing. The Green Imperial has been successfully bred in Singapore, on the parasitic plant Macrosolen cochinchinensis and its complete life history is documented here. 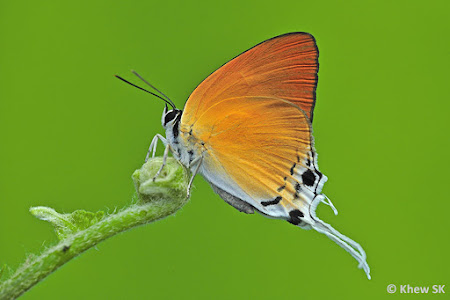 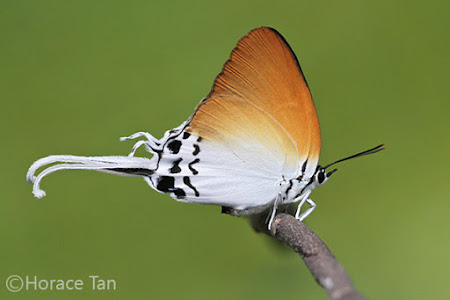 A newly-eclosed female Great Imperial perching on a twig


The Great Imperial is another rare forest species that is likely to spend most of its time fluttering at treetop level. Both sexes occasionally descend to feed at flowering bushes. Females are more often observed than the males. They are usually skittish and difficult to approach without spooking them off to the treetops. 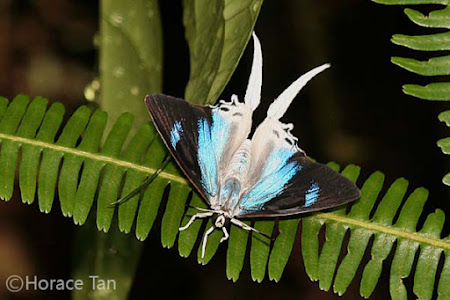 Upperside of a male Great Imperial


The male Great Imperial is a deep shining blue on the upperside, with a short oblique band running across the black apical border. The female is largely brown above with a white tornal area on the hindwing. The underside is a dirty orange with the forewing apex shaded darker. The white tail of the male is usually shorter and sword-like, whilst the female sports a much longer tail, that can measure up to 25mm. 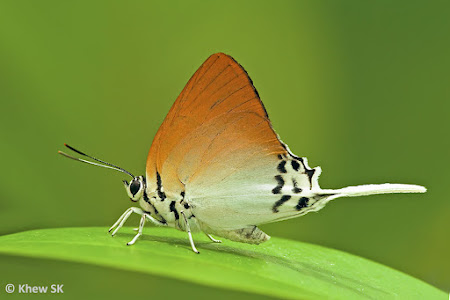 
The Great Imperial can often be misidentified as the closely related Grand Imperial, particularly the female of the species. The ID key below shows the distinguishing features of the two species to separate them.  The life history of the Great Imperial has been fully recorded on Dendropthoe pentandra, which it shares with several other species, and another parasitic plant, Scurrula ferruginea. 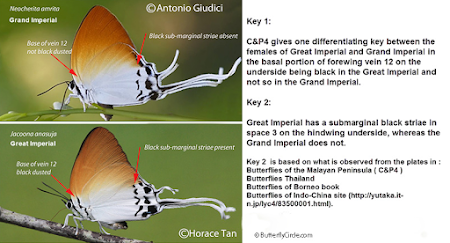 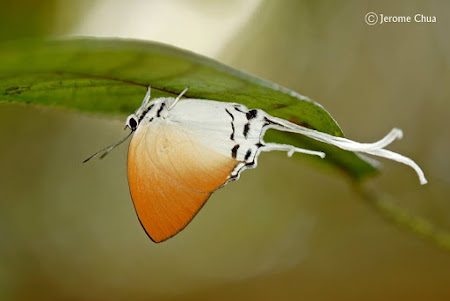 
The final species of the magnificent seven long-tailed hairstreaks is the Grand Imperial. Both sexes are usually larger than the preceding species, and may be considered the largest species of the long-tailed species found in Singapore. The Grand Imperial never fails to impress when it is encountered in the well-shaded forested areas in the nature reserves. With its long tails trailing elegantly as it flits around the shrubbery, it is indeed an awesome sight to behold! 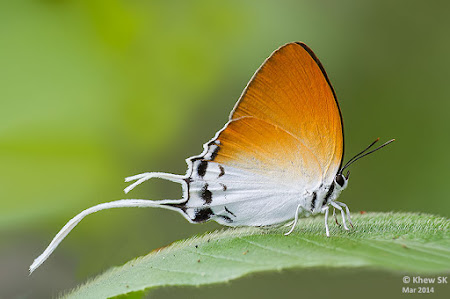 The male Grand Imperial has a royal blue upperside with the apical areas of the forewing blackened. The female is dark brown above with a white tornal area on the hindwing. On the underside, the forewing and the costal half of the hindwing are brownish-orange with the rest of the hindwing a pure white. This species holds the distinction of having the longest tails amongst the seven long-tailed hairstreaks found in Singapore. A female individual in a reference collection had tails that measured a whopping 30mm from the tornal area to the tip of the tail! 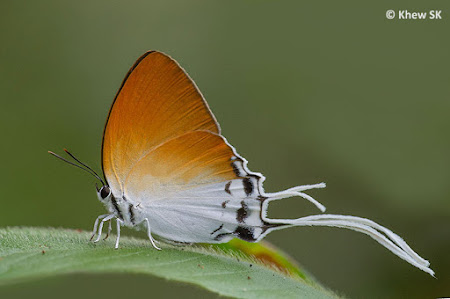 The long tails of the Grand Imperial can reach a length of up to 30mm!


The life history of the Grand Imperial was recently recorded in Singapore in early 2015 on a yet-to-be-confirmed host plant, believed to be also a parasitic plant. Interestingly, the species is common on the offshore island of Pulau Tekong, a military training island, where, on one survey, up to six individuals had been spotted together at a single location. From survey records on Pulau Tekong, both sexes are equally spotted. 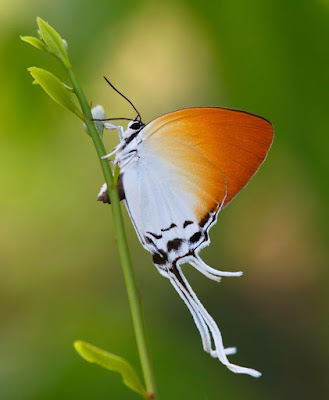 A Grand Imperial from southern Thailand


As we conclude this two-part series on Singapore's Long-Tailed Hairstreaks, we hope that you have enjoyed the beauty of these elegant butterflies enough to explore our forested nature reserves to look for them. No photo can do justice to the beauty of these butterflies in the wild, and we hope that you can experience that exhilarating thrill of encountering them in real life!
Text by Khew SK : Photos by Jerome Chua, Antonio Giudici, Khew SK, Bobby Mun, Horace Tan, and Benjamin Yam
Posted by Commander at 7:13 PM