Life History of the Malayan Swift 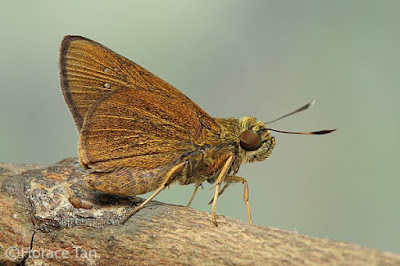 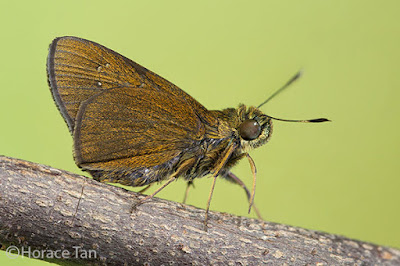 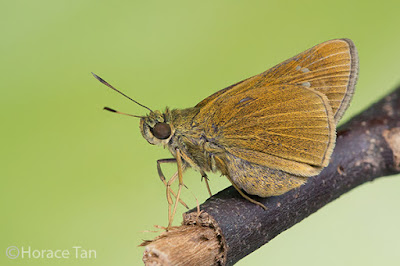 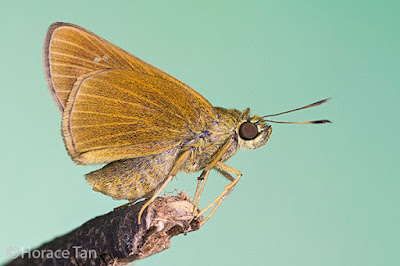 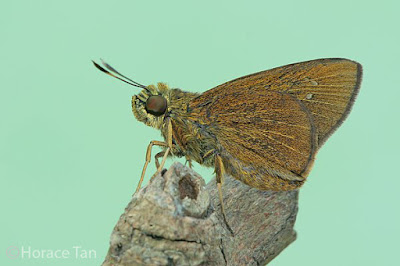 The Malayan Swift is moderately rare in Singapore. Sightings of adults typically occur in forested nature reserves and wastelands where its host plant is growing. Being similar looking to other Caltoris spp. in the underside, it is usually difficult to confirm its id in the field unless a glimpse of its upperside is possible. 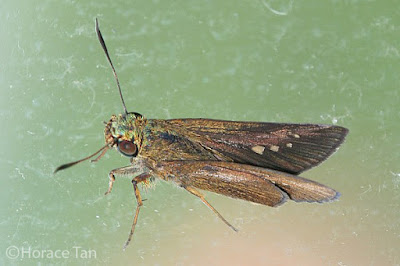 A male Malayan Swift with a partial view of its upperside, showing the absence of cell spots in the forewing.

The Malayan Swift has been bred on a number of bamboo species, with the id of one established: Bambusa heterostachya (Malay Dwarf Bamboo). The caterpillars feed on leaves of the host plants, and live in shelters formed by joining edges of a bamboo leaf together. 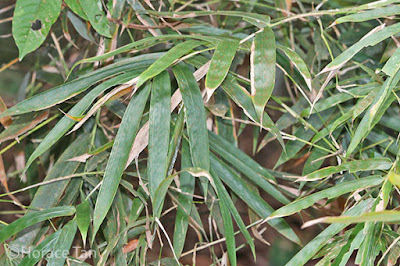 
The eggs are laid singly on the surface of a leaf of the host plant. Each dome-shaped egg is orangy-red with white fuzzy patches on the lower half. The micropylar sits atop. A number of very fine and obscure ridges running longitudinally from the base. The basal diameter is about 1.2-1.3mm. 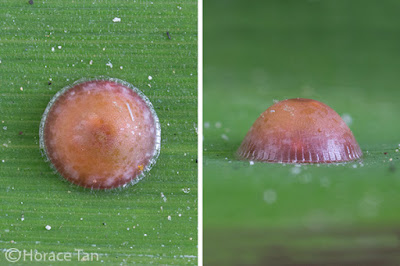 Two views of an egg of the Malayan Swift. 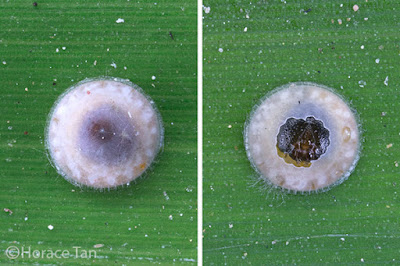 
It takes about 4.5-5 days for the egg to hatch. The young caterpillar eats just enough of the shell to emerge, and has a length of about 2.7mm. Its bright orange body is cylindrical in shape and has a tuff of few moderately long setae at the posterior end. The head capsule is black. A black collar mark can be found the dorsum of the prothorax. The newly hatched nibbles away almost all the remnant egg shell before proceeding to construct its first leaf shelter at the leaf tip. 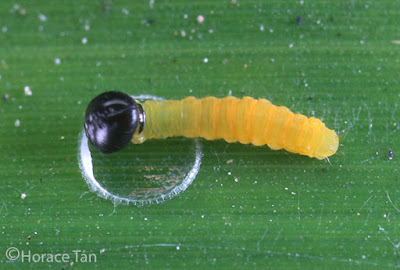 A newly hatched caterpillar of the Malayan Swift, almost done with the remnant egg shell.


The body turns yellowish green after the caterpillar has a few sessions of the leaf diet. By the time the caterpillar lies dormant for its moult to the 2nd instar, its length has reached 4.5mm. The 1st instar takes a total of 4-5 days to complete. 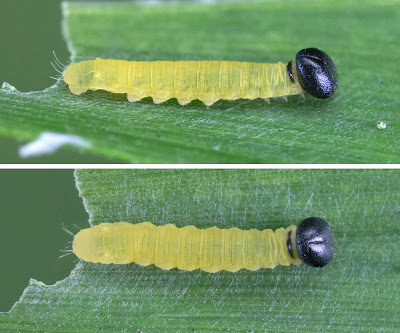 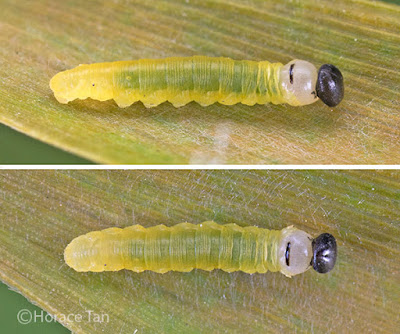 Two views of a late 1st instar caterpillar, dormant prior to its moult, length:4.5mm.


The 2nd instar caterpillar still has a yellowish green body, and the head capsule is either dark reddish brown or black. The black collar mark on the prothorax is no longer visible. This instar lasts about 4-5 days with the body length reaching about 6.5-7mm. 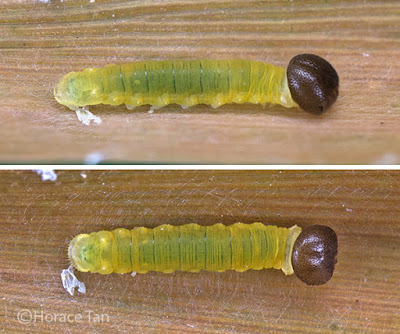 Two views of a 2nd instar caterpillar, early in this stage, length: 4.5mm. 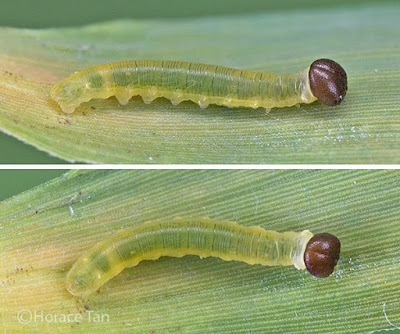 
The 3nd instar caterpillar still has a black or dark reddish brown head capsule but its body is now much paler yellowish green compared to the 2nd instar. This instar lasts a total of 5-6 days with the body length reaching about 12-13mm. 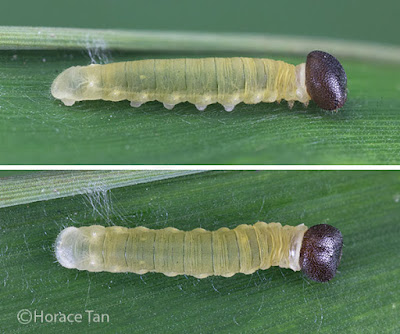 Two views of a 3rd instar caterpillar, early in this stage, length: 6.8mm. 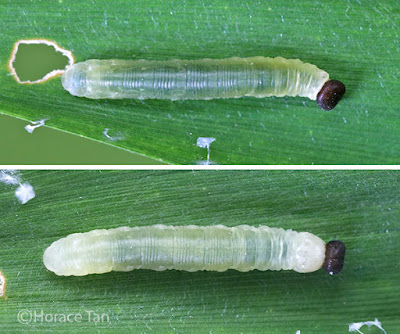 
The 4th instar caterpillar has a whitish body base colour with a very light yellowish green tone. The head capsule is either black or reddish brown. This penultimate instar lasts 6-7 days with the body length reaching up to 20-21mm. 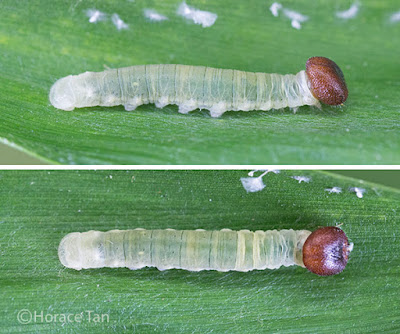 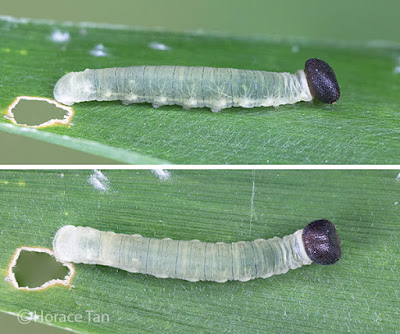 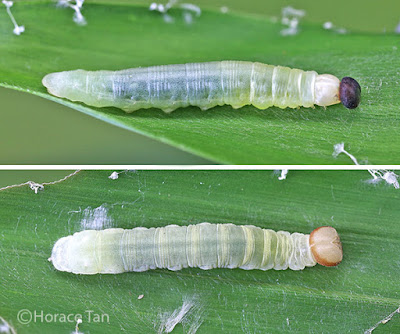 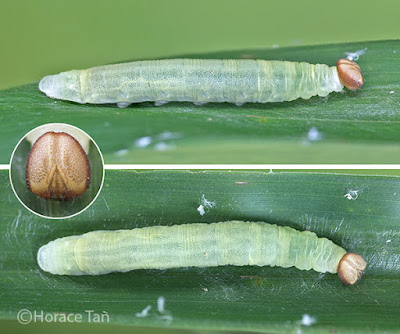 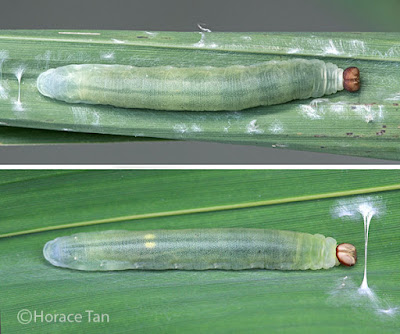 
Towards the end of 5th instar, the body of the caterpillar shortens in length and its colour assumes a uniform shade of pale lime green. It seeks out the underside of a leaf blade and forms a shallow but half-open shelter with silk threads at both ends. The body excretes a moderate amount of white waxy material at this stage. Within the shelter, a silk girdle and a transverse silk band are then spun. Once the caterpillar attaches its claspers to the silk pad, it enters the dormant prepupatory phase which lasts about one day. 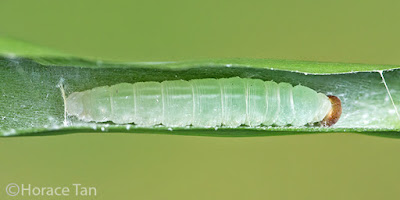 A pre-pupa of the Malayan Swift.


After about 1 day of the dormant pre-pupa stage, the pupation event takes place. The pupa secures itself with the silk girdle across its thorax and with its cremaster attached to the transverse silk band. It has a short thorax, a rather long abdomen, a moderately long and pointed rostrum. The body is uniformly yellowish green with no markings. Length of pupae: 25-31mm. 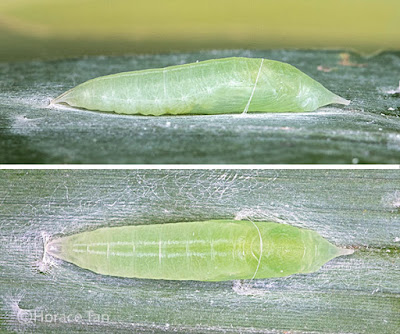 Two views of a pupa of a female Malayan Swift, length: 31mm.


After 7 days, the pupa becomes mostly black in color in the wing pads and in the body segments. Eclosion takes place the next day. 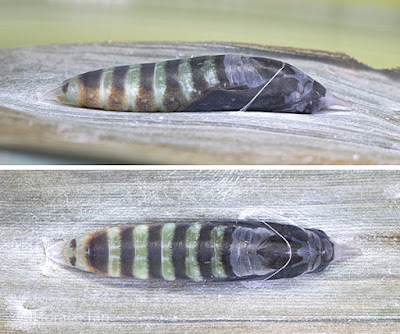 Two views of a mature pupa of the Malayan Swift.

References:
Text and Photos by Horace Tan.
Posted by Horace at 10:20 PM