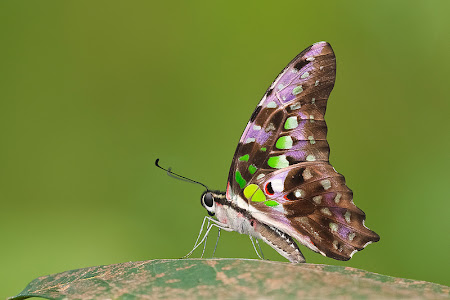 This "Swallowtail" of the genus Graphium is relatively common in urban areas where its host plants are cultivated. Its polyphagous caterpillars feed on a variety of road side trees like the Chempaca and Ashoka trees, as well as the Soursop which is sometimes cultivated in urban gardens. The upperside of the butterfly is an attractive black with emerald green spots on both wings. See more photos of this species here.
The Tailed Jay is a fast flyer with an erratic flight. But occasionally, it can be encountered when resting in the shade with its wings folded upright, as was shot here by young ButterflyCircle member Jonathan Soong, or sunbathing with its wings opened flat to show its impressive upperside. Females have longer tails than the males.
Posted by Commander at 8:22 AM

I see some of them in our property, but not while alighted on something. They are still my frustration as I can't really shoot them in so many years of chasing!