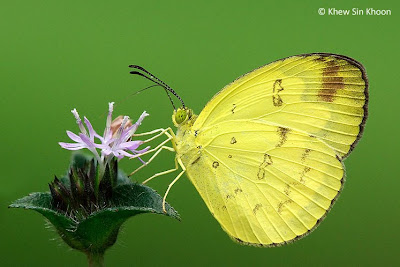 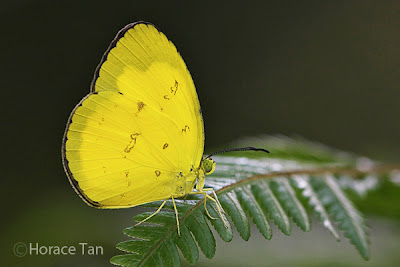 An Anderson's Grass Yellow perching on a fern frond.

Physical Description of Adult Butterfly:
Above, the wings are lemon-yellow with the hindwing having a thin black border and the forewing having a thick black border which is deeply excavated between veins 2 and 4, but not more deeply excavated in space 2 than in space 3. The inner edge of the black border in spaces 1a and 1b inclined slightly towards the tornus. Underneath, the wings are yellow with several rusty brown spots. There is no spot at the base of space 7 on the hindwing, but a single spot is present in the forewing cell. Usually, a rather broad dark subapical stripe can be seen in the forewing. Males have an elongate patch (the brand) lying along the cubital vein on the forewing. 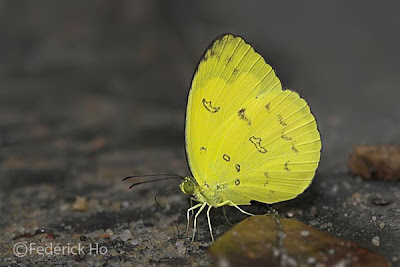 An Anderson's Grass Yellow having its mineral intake on a damp patch. 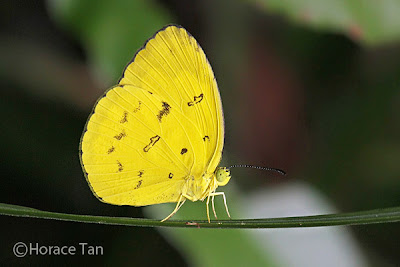 An Anderson's Grass Yellow perching on a grass blade.

Field Observations of Butterfly Behaviour: Anderson's Grass Yellow is not as commonly seen as its close cousin, Common Grass Yellow, (Eurema hecabe contubernalis) as it is mainly a forest denizen with sightings restricted to the Central Catchment Area (CCA). Where its host plant thrives within CCA, Anderson's Grass Yellow can be sighted with relative ease. Typically on a sunny day, adults can be seen fluttering along forest trials, visiting flowers, puddling on wet grounds and making oviposition visits to its host plant. 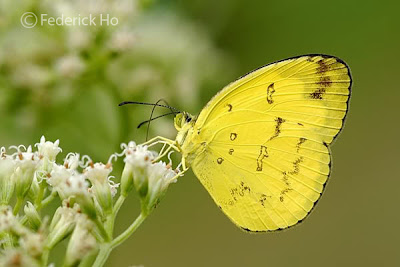 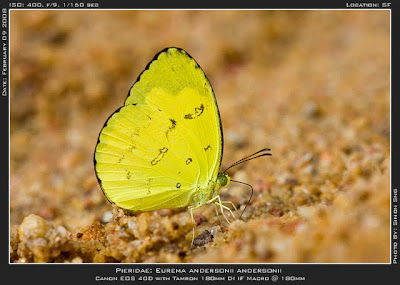 Another puddiling Anderson's Grass Yellow deep in the nature reserve.

Early Stages:
The host plant grows in relative abundance in certain areas within CCA. It appears to be a liana which has young leaves in dark to reddish brown, but turning green when they mature. The early stages of the Anderson's Grass Yellow feed on relatively young leaves of this host plant. Noteworthy is that the same plant is also utilized by early stages of the Tree Yellow (Gandaca harina distanti). 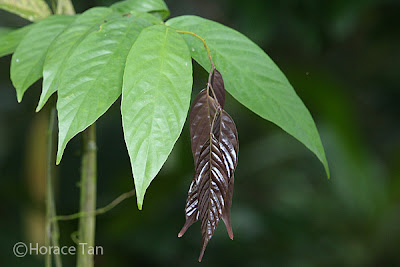 
The eggs of the Anderson's Grass Yellow are laid singly on the surface of a young leaf of the host plant. The long spindle shaped egg is laid standing at one end with a length of about 1.1-1.2mm. It is creamy white in color and has many fine vertical ridges and numerous indistinct and intermittent horizontal ridge lines. The micropylar sits at the tip of the standing egg. 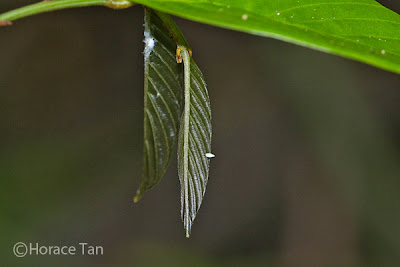 An egg of the Anderson's Grass Yellow sighted on a young leaf within the nature reserve. 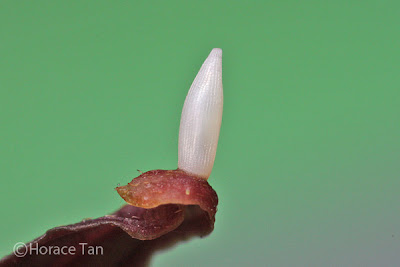 A close-up view of an egg of the Anderson's Grass Yellow.
The egg takes about 2-3 days to hatch with the newly hatched eating away part of the egg shell to emerge. Measuring about 1.8-1.9mm in lenght, the newly hatched sports a creamy white head capsule and a cylindrical and pale whitish body covered with rows of tubercles running lengthwise. Each tubercle has a setae emerging from the middle of it. The two rows of tubercles flanking the dorsal line are much larger but with shorter setae than the rest. A miniscule droplet of fluid can be found at the tip of some of the setae. 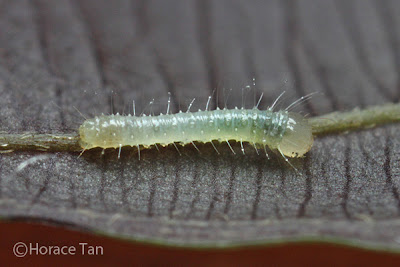 The newly hatched has the rest of the empty egg shell as its first meal before moving on to eat the lamina of the young leaf. The body and the head become more yellowish as the caterpillar feeds and grows. The body also assumes a strong green undertone as the caterpillar grows to a length of about 4mm in about 2-2.5 days for this instar. 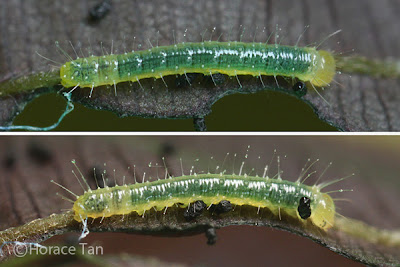 
The 2nd instar caterpillar have numerous setae-bearing tubercles on its body with the length of the setae proportionately shorter than in the first instar. The head capsule is yellowish green and sporting a few rather fine setae. This instar lasts about 2-3 days with the body length reaching 8mm. 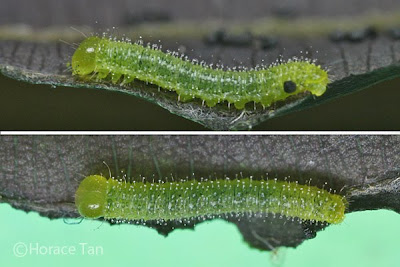 Two view of a 2nd instar caterpillar, early in this stage, length: 3.5mm 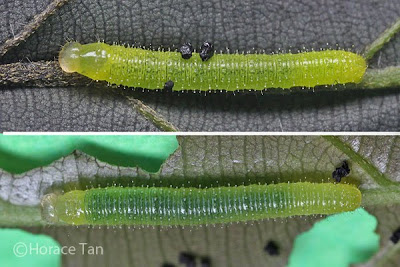 Two late 2nd Instar caterpillars, moments before their respective moult to the next instar.


The 3rd instar caterpillar has a yellowish green body with a similarly-coloured head capsule. Its numerous setae are proportionately shorter compared to the previous instar. A closer scrutiny reveals that the body is essentially yellow in base colour, and each body segment has up to 6 rings of small tubercles which are green to dark green in colour. Typically each tubercle has one short and fine setae protruding from it, and the end of each setae has one tiny fluid droplet. A white lateral band is seen on either side of the body, rather faint at this stage. This instar takes about 1.5-2.0 days to complete with body length reaching about 11-12mm. 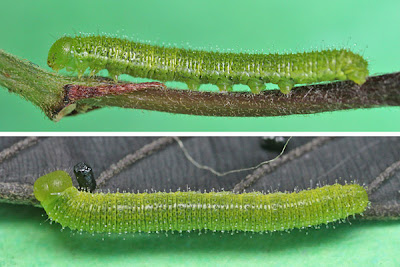 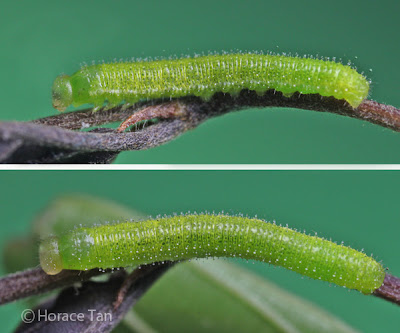 A very late 3rd instar caterpillar, soon to moult to the 4th instar.


The appearance of the 4th instar caterpillar is little changed from the 3rd instar. The lateral whitish bands are broader and thus more prominent. This instar lasts 1.5-2.0 days with body length reaching about 18mm. 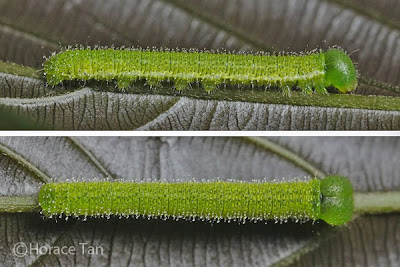 Two views of a 4th instar caterpillar resting on the midrib of a young leaf, early in this stage, length: 9.5mm.


The 5th and final instar caterpillar resembles the 4th instar caterpillar closely. The one visible change is in the lateral white bands which have become prominent and well defined in their outlines. The 5th instar lasts for 3-4 days, and the body length reaches up to 29mm. 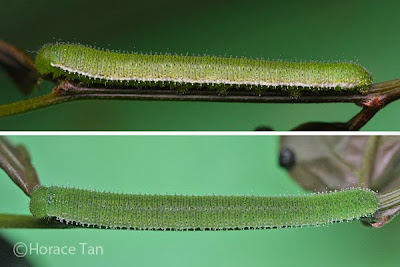 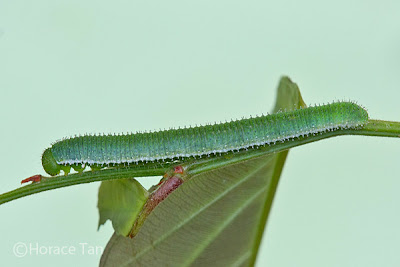 On the last day of the 5th instar, the body of the caterpillar shortens and changes to a dull shade of pale green. It ceases feeding and comes to rest on the underside of a stem/stalk on the host plant. Here the caterpillar spins a silk pad and a silk girdle, with which the caterpillar soon become immobile in its pre-pupatory pose. 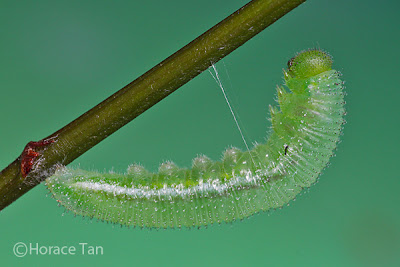 A pre-pupatory larva of the Anderson's Grass Yellow on a stem of the host plant.

Pupation takes place about 0.5 day later. The pupa secures itself with the same silk girdle as in the pre-pupal stage, but with cremaster replacing claspers in attaching the posterior end to the silk pad on the stem, The yellowish green pupa has a pointed head, a slight dorsal protrusion, and a large wing case tapering into a keel. A pale brown dorsal band, rather broad in width, runs from the anterior to the posterior end. A pale brown line also runs laterally on each side from the thorax to the posterior end. Length of pupae: 17mm. 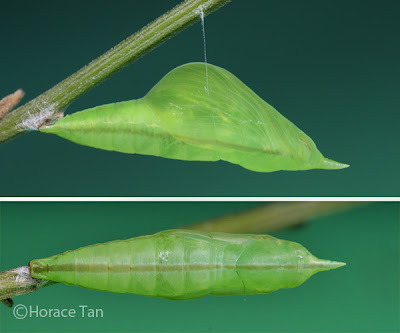 Two views of a pupa of the Anderson's Grass Yellow. 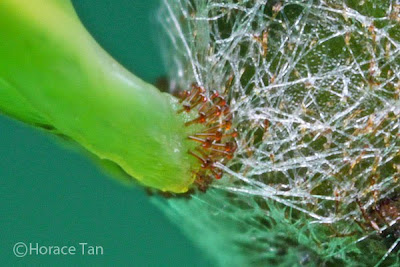 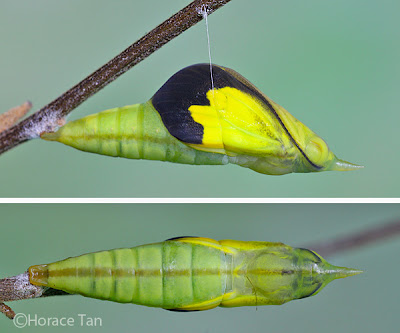 Two views of a mature pupa of the Anderson's Grass Yellow.
The now transparent wing pad show s the yellow forewing upperside with its black border.

After about days 5.5-6.0 days of development, the pupal skin turns translucent as the development within the pupal case comes to an end. The yellow coloration and back borders on the forewing upperside are now discernible. The following day, the adult butterfly emerges from the pupa. 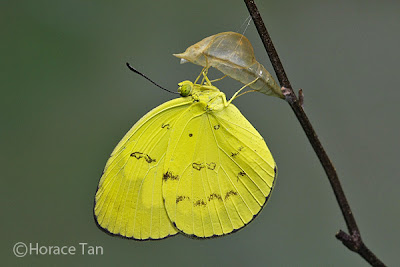 A newly eclosed Anderson's Grass Yellow drying its wings near its pupal case.

Thanks for the nice words. :)
We are glad that you like the blog and photos here.