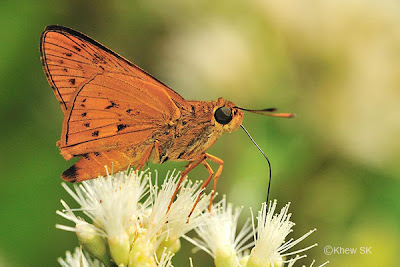 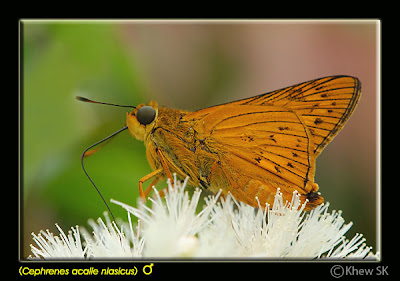 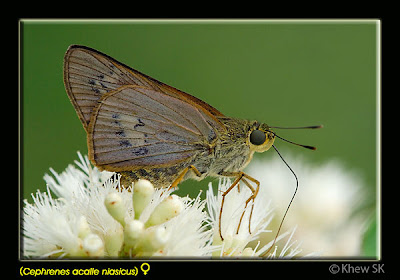 Physical Description of Adult Butterfly:
The adults, especially the males, are similar to Telicota spp. but are generally larger. However, unlike the Telicota spp, the male lacks a stigma (a secondary sexual character). Above, the male is dark brown with orange-yellow markings, which includes on the forewing, a post-discal band running from dorsum to vein 6 and three subapical spots, and on the hindwing, an orange-yellow discal band, central streaks and tornal cilia. The female's markings are usually very sullied. and the hindwing beneath has an oily sheen and may be coloured green, bluish and purple. Beneath, the male is ochreous with markings outlined in black spots. The female has an oily sheen, especially on the forewing apex and hindwing, and may be coloured green, bluish and purplish. In the females, the markings on the hindwing are generally defined by dark spots, but these could be absent in some specimens, making the markings obscure. 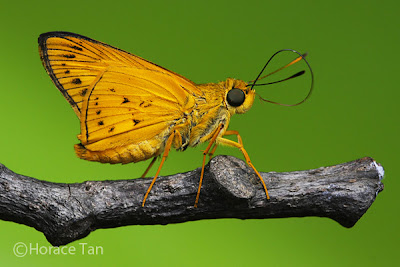 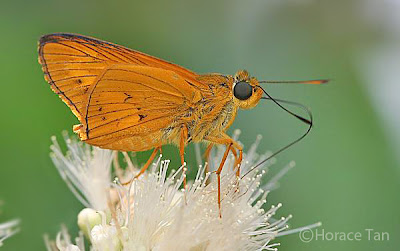 Field Observations of Butterfly Behaviour:
The adults are rarely encountered in Singapore, due likely to their habit of being more active at dawn and dusk. So far, sightings of the swift flying adults have been restricted to parts of Southern Ridges and in Pulau Ubin, and typically on flowering plants such as the Syzygium species. 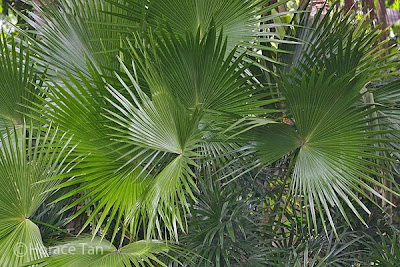 The eggs are laid singly on the underside of a host plant leaf. Each dome-shaped egg is creamy yellow with a flat base. The micropylar sits atop. Upon close inspection, numerous tiny and inconspicuous pits can be seen on the egg surface. The eggs are rather large with a diameter of about 1.7-1.8mm. 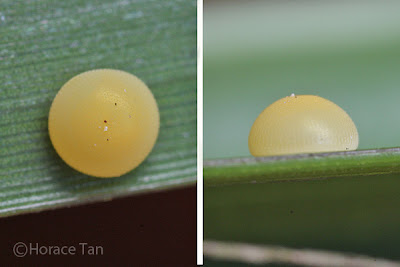 Two views of an egg of the Plain Palm Dart, diameter: 1.75mm.

It takes 5-6 days for the collected egg to hatch. The egg first develops red patches on the pole and in an equatorial belt, and then turns dark pinkish-red with the dark head capsule becoming visible through the egg shell. The reddish coloration fades away in the day prior to the hatching event. 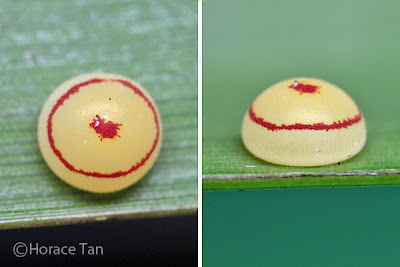 Maturing egg with a red polar patch and a red equatorial belt. 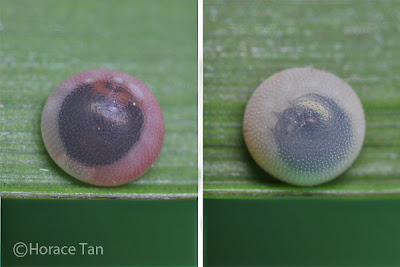 Mature egg with a faint view of the head, with the one in the right panel closer to hatching.

The young caterpillar eats just enough of the shell to emerge, and then immediately proceeds to finish the remaining egg shell. The newly hatched has a length of 5-5.5mm. Its creamy white body is cylindrical in shape with dorsal, lateral and sub-spiracular setae, all of which are short with the exception of those at the posterior end. The large head is black with a few short white setae. A black collar, as in common in many 1st instar skipper caterpillars, is found on the prothorax just behind the head. All instars of the the Plain Palm Dart feed on the mature leaves of the host plant, and constructs leaf shelters by joining folds of a leaf together. 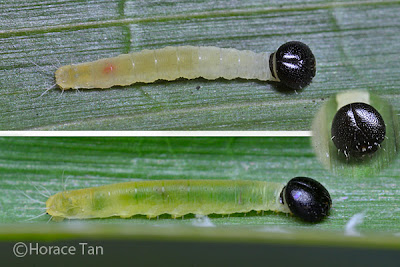 The body soon takes on a green undertone after a few feeding sessions on the leaf. Its movement on leaf was observed to be rather quick-paced. The 1st instar takes a total of 4-5 days to complete with body length reaching 7.5-11mm. 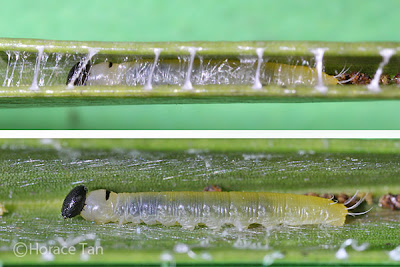 Two views of a 1st instar caterpillar, late in this stage, length: 7.5mm.
With leaf shelter almost closed (top); and opened up (bottom).

The body of the 2nd instar caterpillar resembles that of the first instar, but with the dark collar on the prothorax absent. The tuff of long setae at the posterior end is still prominent lyfeatured. This instar lasts a total of 3-5 days with the body length reaching up to 14mm. 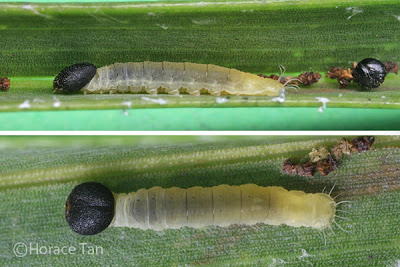 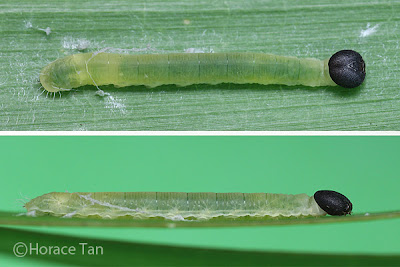 Two views of a 2nd instar caterpillar, late in this stage, length: 14mm. 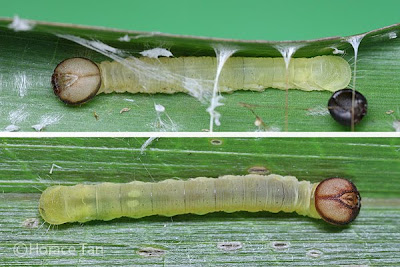 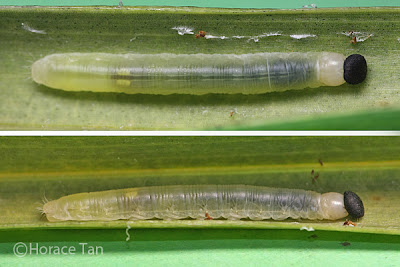 The 4th instar caterpillar is now consistent in having a light brown to beige head capsule margined in dark to reddish brown. This instar lasts 6-7 days with the body length reaching up to 27-31mm. 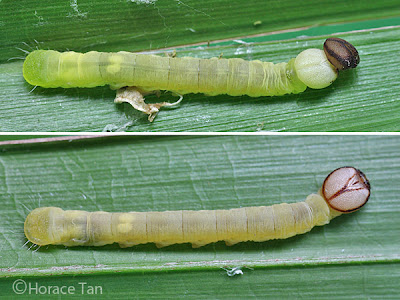 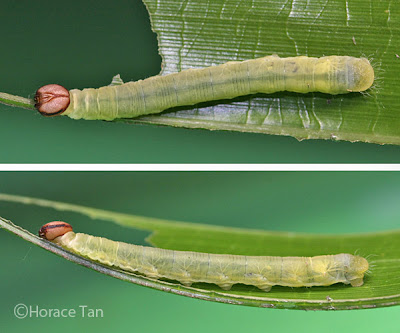 Two views of a 4th instar caterpillar, late in this stage, length: 29mm. 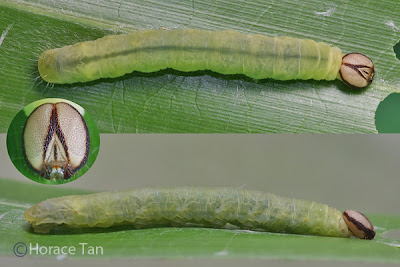 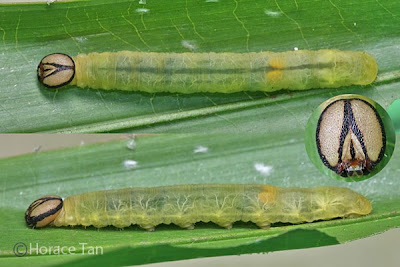 The 5th instar takes about 7-8 days to complete with the body length reaching up to 43mm, In the last day of this instar, the caterpillar ceases feeding and its body colour turns milky green with a strong pinky undertone. 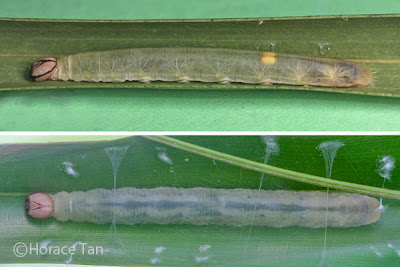 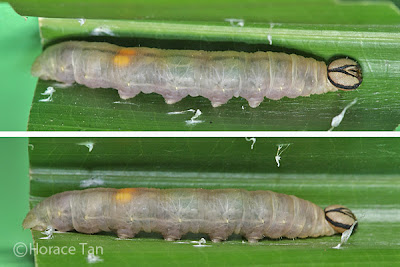 Two views of a 5th instar caterpillar, with body color changes prior to becoming a pre-pupa.

Towards the end of 5th instar, the body of the caterpillar shortens appreciably. Soon the caterpillar becomes dormant in a leaf shelter which it seals with a copious amount of silk threads. In the tightly closed pupation shelter, the caterpillar also secretes large quantity of whitish waxy substance. This prepupatory phase lasts for 1-2 days.

Two views of a pre-pupa of The Plain Palm Dart.

Pupation takes place within the leaf shelter. The pupa does not have a cremaster nor a silk girdle and it is mainly secured with tightly woven silk threads in the shelter. It has a short thorax, a rather long abdomen, a short and pointed rostrum. The body is pale green in the thorax and wing pad areas, but pale yellowish brown in the abdomen. Length of pupae: 21-26mm. 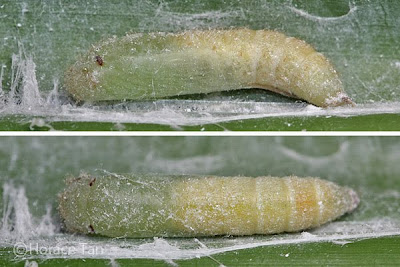 Two views of a pupa of the Plain Palm Dart, length:24mm

After 8-9days, the pupa becomes mostly brown with the wing pad areas showing the orangy markings on the forewing upperside. Eclosion takes place the next day. 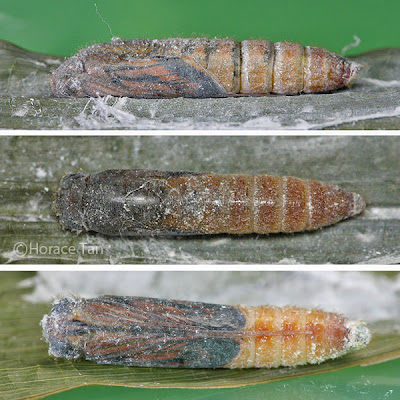 Three views of a mature pupa of the Plain Palm Dart. 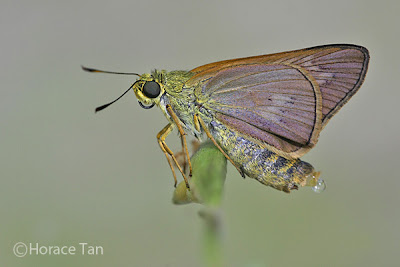 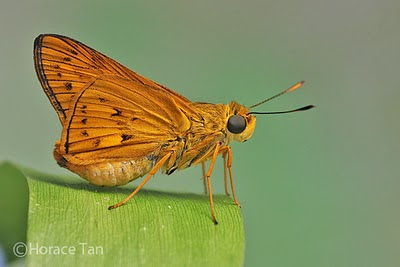 Hi Commander! Great shots of the palm dart. I saw one at the DFNP. Yes, it was quite late.

Just curious, did you see a male or female Plain Palm Dart?

For me I see the male one in my estate all the time and one even came into my living room in the evening. :)

Sorry after looking at my photo I'm confused, i may be referring to the yellow palm dart instead. How do you differentiate?

You can see my house version here:

Henry,
I use the discal patch (its coloration and black markings) on the hindwing underside to differentiate between the two. Later I will prepare an illustration pic and post it in the BC forum.