Butterfly of the Month - January 2010 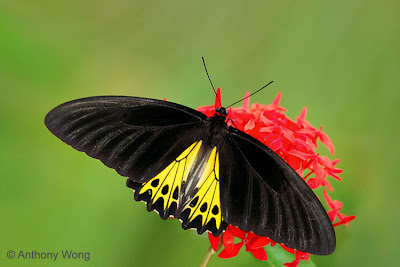 We start a fresh decade in the 21st Century with one of the largest butterflies in Singapore, the Common Birdwing. This species is not rare, and where the host plant is plentiful, there have been occasions where a number of individuals have been seen, as were their caterpillars, in locations like the Singapore Botanic Gardens, Singapore Zoological Gardens and Alexandra Hospital Butterfly Trail. 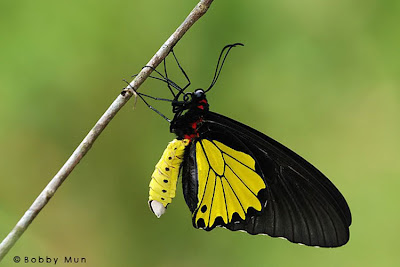 It is always an uplifting experience to see a Birdwing in flight - with its contrasty black-and-yellow colour scheme, the butterfly is conspicuous, large and showy. As it flutters and glides high at the treetops, the flight of the Birdwing is reminiscent of that of birds. The species descends to flowering plants like the Pagoda Flower, Hibiscus, and even Lantana, to feed. Typical of the flight of Papilionidae, the Common Birdwing's forewings flutter rapidly, whilst the hindwings are kept almost still, when it is feeding at flowers. 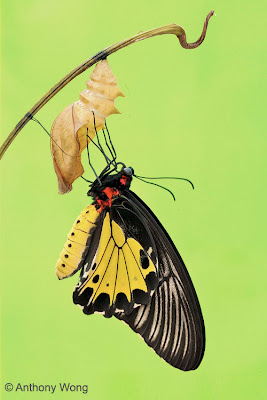 The Common Birdwing has black forewings with the veins beyond the cell edged with pale greyish streaks that are more conspicuous in the female. Some individuals however, may lack these pale streaks altogether. The hindwing is a rich golden yellow edged with black, and the female has a complete series of large black submarginal spots that are usually not conjoined. Males may have one or more spots, but never a complete series 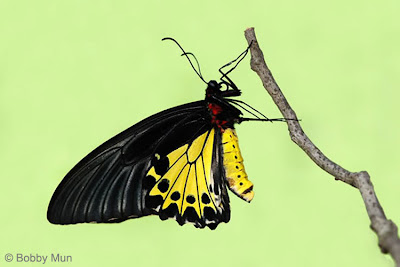 Unlike the typical males of the Papilionidae, the male Common Birdwing is rarely observed puddling at muddy footpaths and stream banks. Both sexes can often be found flying in the vicinity of their host plant, Aristolochia acuminata. 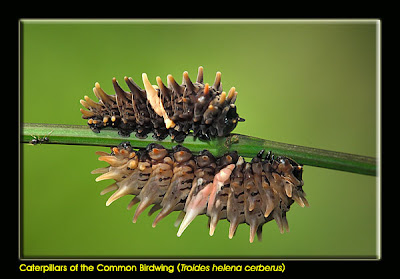 Whilst the species cannot be considered rare, it is a species that is vulnerable to extinction if its host plant disappears from Singapore's parks and forests. This species shares the host plant with another Papilionidae, the Common Rose (Pachliopta aristolochiae asteris). 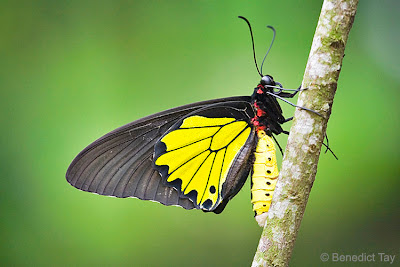 The Common Birdwing has the distinction of being the only species in the Singapore Checklist to be listed in the Convention on International Trade in Endangered Species (or CITES) Appendix II. Appendix II lists species that are not necessarily now threatened with extinction but that may become so unless trade is closely controlled. 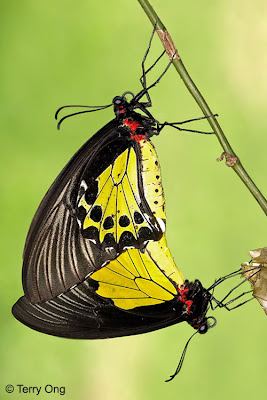 The conservation strategy to enhance the chances of survival of this spectacular species would be to continue to cultivate its host plant in more locations especially in parks, park connectors and even private homes in Singapore. 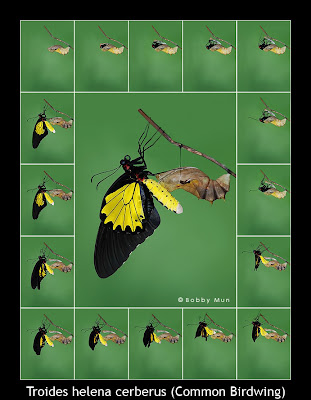 Posted by Commander at 9:19 AM

Nice shots of the birdwing. Such a beautiful butterfly.. Still can't get it to land. Huff!