The Common Three Ring - a Cinderella of Butterflies

In his book, Common Malayan Butterflies, author R. Morrell describes the Common Three Ring (Ypthima pandocus corticaria) as "a poor Cinderella of butterflies, so common that no one has troubled to observe its life history". Indeed, most photographers also tend to ignore this "unattractive" species and prefer to shoot other prettier subjects. 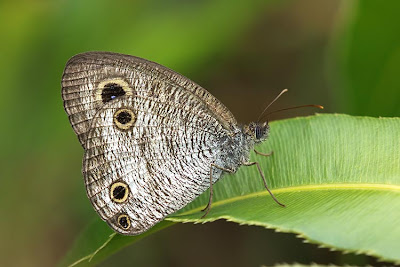 Butterflies of the genus Ypthima are generally called by their English Common names derived from the yellow-ringed submarginal eyespots on the hindwing. The larger ring on the forewing is not counted. Furthermore, the pair of small rings at the tornal area of the hindwing counts as a single ring. Hence in the Common Three Ring, there are three ocelli on the hindwing. 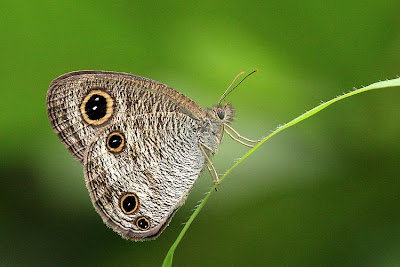 Other related species of the genus are named after the number of rings - four, five and six, in a similar fashion. The other species are not featured in this short article. 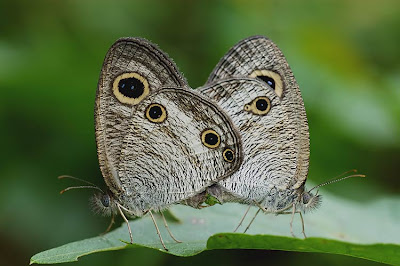 The Common Three Ring is thought to "almost dispute the claim of the Common Grass Yellow (Eurema hecabe contubernalis) to be regarded as the commonest butterfly in Malaya". In Singapore, that is certainly not the case, as the Common Three Ring, whilst relatively common, is not as widespread as its yellow competitor. Found locally at various spots at the fringes of the nature reserves, it is not common in urban parks and gardens, where its cousin, the Common Five Ring appears to be more often observed. 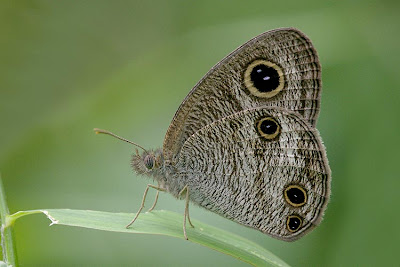 The caterpillar of the Common Three Ring feed on grasses, and we have recorded the early stages to be surprisingly long - a period of about 38 days from egg to pupation, for a butterfly that is supposedly common. 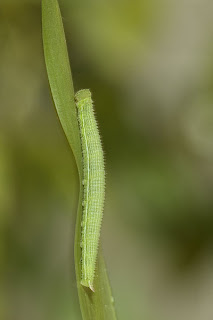 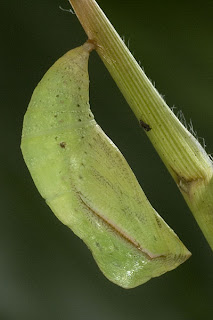 The species is the largest of the genus Ypthima in Singapore. It is greyish brown above, with a large subapical black yellow-ringed ocellus on the forewing. There are two silvery spots in the black ocellus. On the hindwing, there is a similar but smaller subtornal ocellus, and another pair at the tornal area. The underside is greyish to pale buff brown, with the wings traversed by innumerable fine dark brown striations where the hindwing has three yellow-ringed black submarginal ocelli. 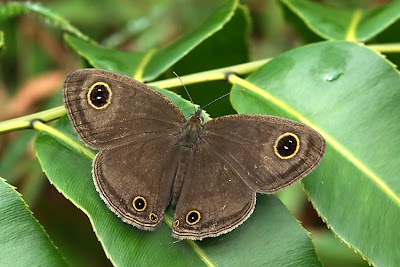 The Common Three Ring is somewhat variable in its markings and even size. It is a weak flyer, usually staying just a few feet above from the ground. It prefers flying amongst low grasses and does not usually fly far if undisturbed. In the early morning hours, it has a tendency to sunbathe with its wings opened flat. However, it is quite alert, and takes a bit of patience to get a good shot of it. 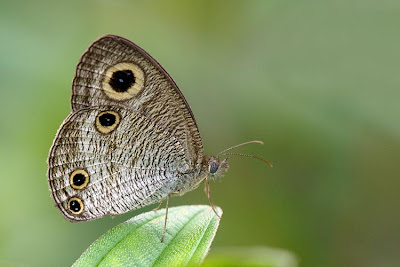 Where it is found, usually several individuals are seen together. In Singapore, the species is usually found at grassy patches and often flies in the company of other species of the Bush Browns (Mycalesis) and Nigger (Orsotriaena) genera.
Text by Khew SK : Photos by Khew SK
References :
Posted by Commander at 10:48 PM