Why Do Butterflies Puddle?

Puddling Butterflies - Why Do they Do It? 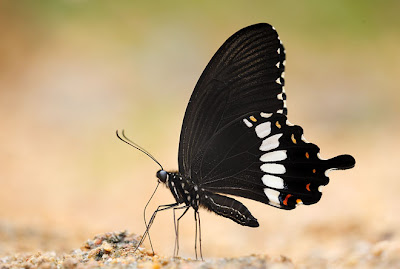 The term "puddling" refers to the process in which butterflies 'sip' from puddles of water, mud, dung or carrion on the ground. Many species of butterflies are often encountered with their proboscis unfurled and probing into the ground to take in water and nutrients. At the muddy or sandy puddle (often tainted with animal urine or excreta), the butterfly sips water rich in mineral salts and other essential nutrients (mostly sodium chloride and nitrogen-rich solutions) that have leached from the surrounding soil and rocks. Male butterflies do more puddling than females.

Why do butterflies puddle?

The commonest explanation for this is that they are taking in water and nutrients. The dissolved salts and minerals may be used to make pheromones (that the male uses to attract females) and sperm. The main stimulant for puddling is sodium. The diet of adults (primarily nectar and fruits) lack sodium/salt, and the hostplants that they feed on in their younger larval stages do not provide enough sodium either. Sodium is vital for many physiological functions, including digestion, excretion, reproduction and flight. The males have to sustain high activity levels to be able to fly around and locate receptive females, so they have a need for higher energy and metabolism levels. Indeed, the males of many species are known to be more active and faster in flight than females.

So what is the function of sodium extracted during puddling?
Males seem to benefit from the sodium uptake through mud-puddling behaviour with an increase in reproductive success. Sodium is passed by the males to the females during mating. Males transfer this sodium and amino acids to the females together with the spermatophore during mating, as a nuptial gift - it enhances reproductive success. This nutrition also enhances the survival rate of the eggs.Each male can mate with multiple females, so with each copulation, the sodium/nutrient stock is depleted and he will have to puddle again. 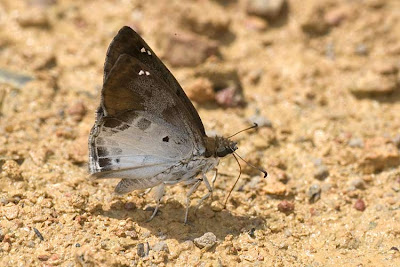 Do butterflies of both sexes puddle?
It is usually the younger males that puddle. Females are known to puddle, but that is not the norm. There are various costs and risks associated with puddling, like predation or parasitism, and extra energy utilised.
The females minimise these risks by not puddling. By not needing to puddle, they can focus their energies on obtaining more of the other kinds of nutrients, hunting out better oviposition sites, and on laying healthier, more fertile eggs. 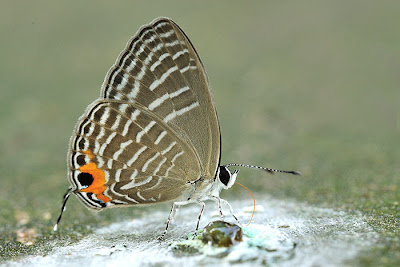 How long is the puddling process?
A butterfly can puddle from anything between a few seconds to an hour or more, depending on a variety of factors. During the puddling process, butterflies suck the nutrient rich fluids through their proboscis, and "filter" it within their systems to extract the needed chemicals. 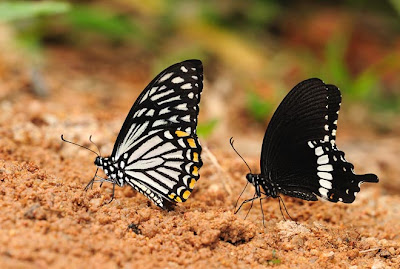 Where does the excess fluid go?
Obviously, fluid ejection results from a need to pass great quantities of soil moisture through the gut in order to extract sufficient useful, but dilute, chemicals. If a particular puddling butterfly is closely watched, one can often see sudden, regular ejections, even squirts, of fluid from the end of the abdomen. These regular ejections of fluid can sometimes be powerful enough to reach several body lengths away from the butterfly! 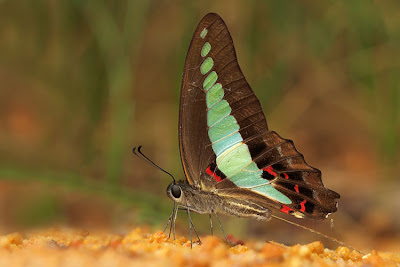 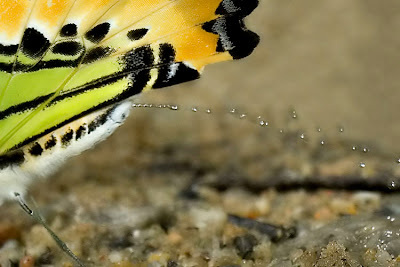 Are there any dangers associated with puddling?
Some species of butterflies observed during puddling appear to be in drunken stupor, especially those that have been puddling for a long time. The butterflies appear to be intoxicated on whatever they have been puddling on and become oblivious to their surroundings. This makes them very vulnerable to predatory or parasitic attacks. 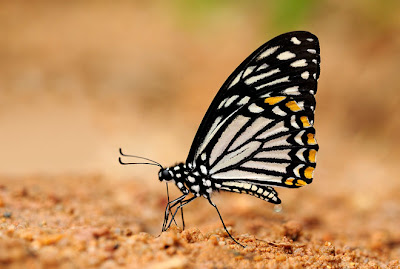 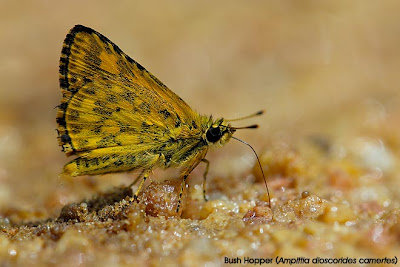 Is puddling a social activity?
Probably not in the way we humans define a social activity. However, whenever damp patches of sand or soil is rich in animal excretions or fermenting organic matter, a lucky observer can often encounter a large congregation of various species of butterflies puddling at the same spot - often jostling with each other for the best positions to puddle. If disturbed, the entire congregation erupts in a cloud of colour as their liquid buffet party is interrupted, only to settle down very quickly again to puddle as soon as any perceived threat is over. 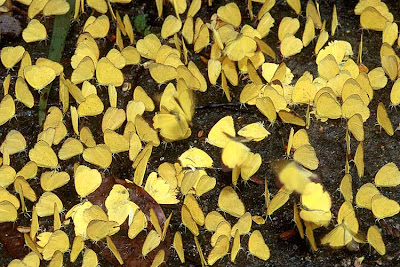 A single-species congregation of puddlers. These are Three Spot Grass Yellows

Butterflies of most of the families do puddle, although the Papilionidae, Pieridae, Nymphalidae and Lycaenidae are most often observed to puddle quite readily. Many species, usually powerful flyers which rarely offers an observer a chance to view or photograph them when they are in flight, allow a much better chance for close-quarters observation when they are puddling. 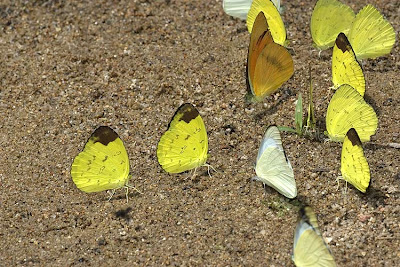 Very beautiful blog you have. Did not know there are so many beautiful butterflies in Singapore. I have link you and will find time to read your old posts. :)

Thank you, Alice, and glad you dropped by the blog. Yes, there are many species of pretty butterflies in Singapore. Sometimes, beauty is right under our noses, and yet we don't see it!

Do come back and visit us once in awhile. This blog is updated every weekend. :)

Thanks for visiting, Jane.

My name is Jane and I am currently working with a small team of scientists on producing a series of 'E-Essays' to be published on Amazon Kindle. The essays are based around a variety of interesting scientific topics, and the goal is primarily to educate the discerning lay reader in topics of particular interest in natural history. Our current essay is about salt and briefly discusses the phenomenon of butterfly puddling, whereby diluted sodium is concentrated to be used in copulation. We try to add value to all of our essays by using images of the subjects, and I came across your beautiful photographs which would be perfect for illustrating our essay.

I am writing to you to ask if there is any chance we could obtain your permission to use some of these images in our essay, in particular the close-up of the abdomen of the fivebar swordtail? We would of course give the appropriate acknowledgment in the image captions (including a link back to this site) if you were comfortable with us using the images. Any help would be very much appreciated!

It's more informative. We encounter this behaviour of buuterflies often but never thought of it, it would be like this.
So, can you give more information regarding the intake sodium content and it's role in reproduction?

Thank you for this article. I've just witnessed a blue butterfly puddling. I googled and found your article, now I'm informed.