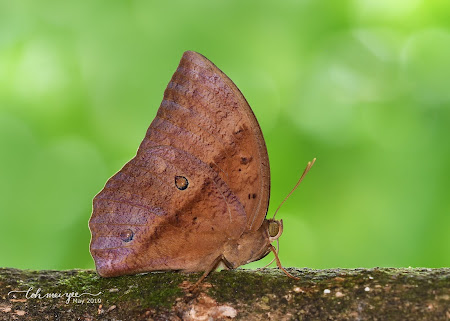 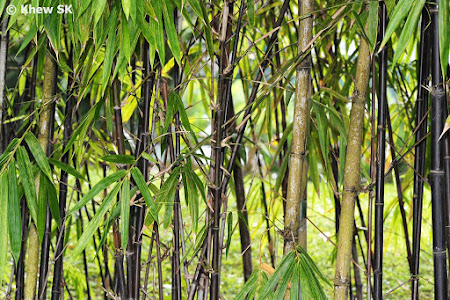 Plants can generally be classified into monocotyledons and dicotyledons. Whilst it is beyond the scope of this article to discuss plant taxonomy and biology, we take a layman's view of plants on which these caterpillars feed, and their correlation to the butterfly families. In general, monocotyledons feature long, narrow-leafed plants with parallel veined leaves, whilst dicotyledons are generally broad-leafed with net-veined leaves. 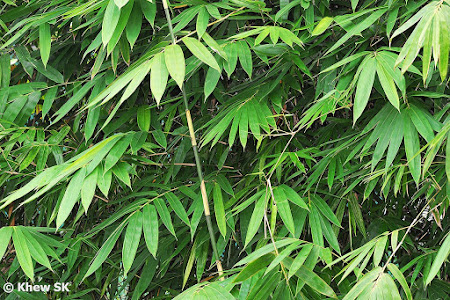 This blogpost deals with a specific group of monocotyledons - the bamboos. From online resources, there are over 1,600 species of bamboos, and broadly split into two groups that describe how they grow in nature - clumpers and runners. In southeast asian countries like in Singapore, the clumpers are the more dominant species. The diversity of bamboo species is amazing, and identifying the spectrum of species is best left to the experts. Bamboo, like the coconut tree, has a myriad of uses in construction, cuisine, ornaments, medicine and everyday utensils. 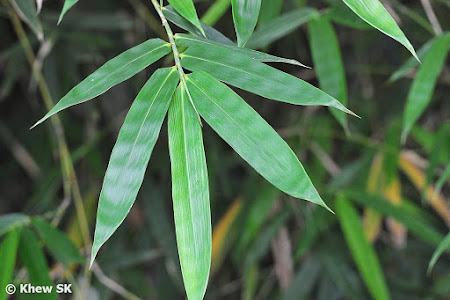 
Coming back to bamboo and butterfly correlation, it is noteworthy to mention that caterpillars of only two families of butterflies feed on bamboo leaves - Nymphalidae and Hesperiidae. And if we move one level deeper, only a few species from two subfamilies - Satyrinae and Hesperiinae, use bamboo as their caterpillar host plants. 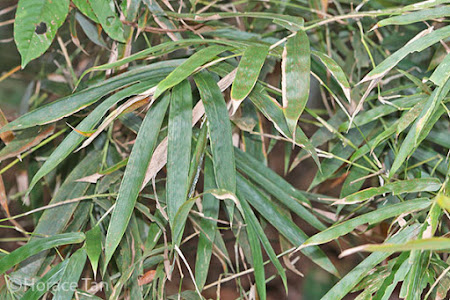 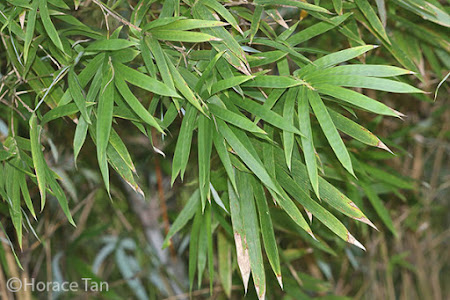 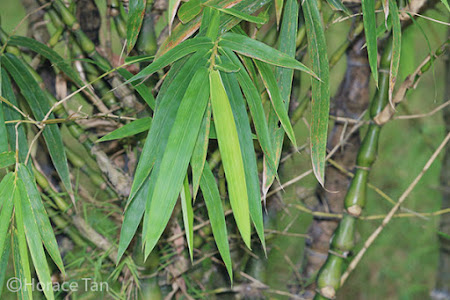 
We take a look at a few examples of the species from these two subfamilies that use bamboo as their caterpillar host plants. As research and data are continuously being updated and new finds are discovered and documented, the information that we have are by no means final. The intent here is to highlight the similarities and differences amongst the species that use bamboo as a host plant. 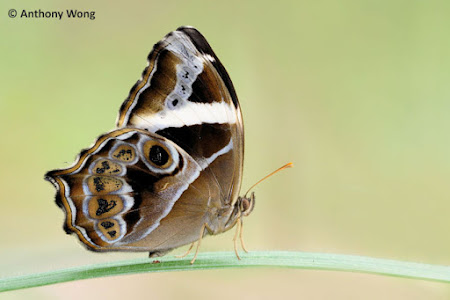 The English common name of the butterfly already suggests that the species is somehow connected to bamboos. This medium-sized species is by no means common, but can often be found in the vicinity of bamboo clumps around Singapore. It is an elusive species, skittish and hard to approach. Its caterpillars feed on bamboo leaves although it is likely to use different species of bamboos as its host plant. 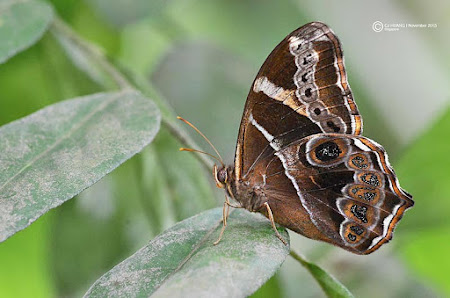 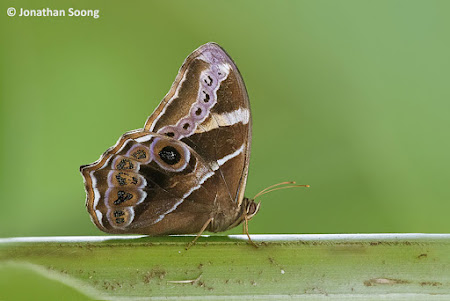 The Bamboo Tree Brown is predominantly brown above, with females having a wider subapical band on the forewing compared to the male. The undersides bear a number of cryptic patterns with thick lilac ocelli on the forewing. There is a short "tail" at vein 4 of the hindwing. The butterfly stays close to bamboo thickets and flies low amongst the shrubbery. 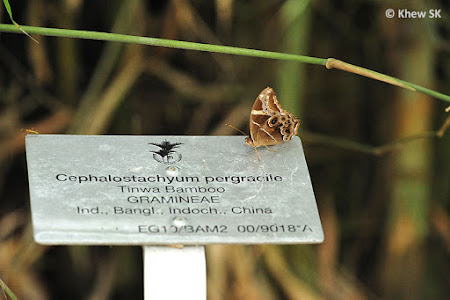 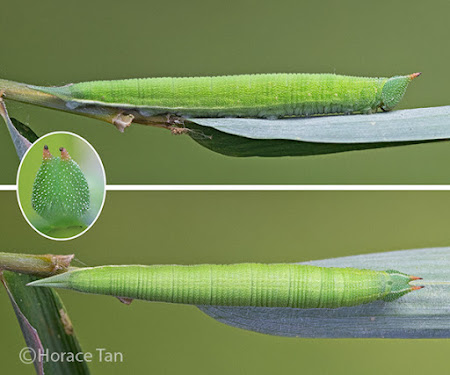 The caterpillar is green and resembles the related species amongst the Mycalesis (Bush Browns), Ypthima (Rings), and Elymnias (Palmflies) in that they feature "cat ear" heads and a twin-tailed posterior. The Bamboo Tree Brown is relatively widely distributed across Singapore, and can be found quite regularly on Pulau Ubin and in the bamboo garden of the Singapore Botanic Gardens near the Eco-Lake. 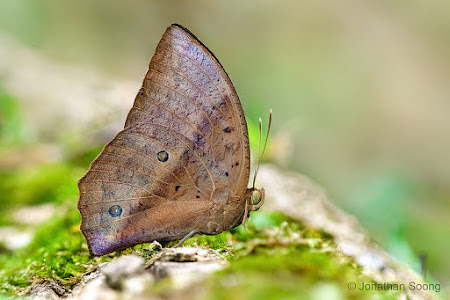 The second Satyrinae species featured in this article, the Common Duffer can hardly be described as 'common' in Singapore these days. However, at times, its caterpillars have been found in numbers, feeding on the leaves of bamboo. The adult butterfly is elusive and stays in heavily-shaded thick vegetation. Its cryptic undersides camouflage it well, and unless it is disturbed and flies off, it is hard to detect. 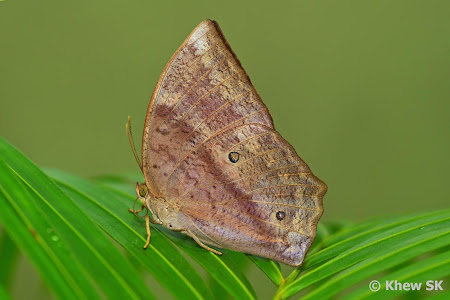 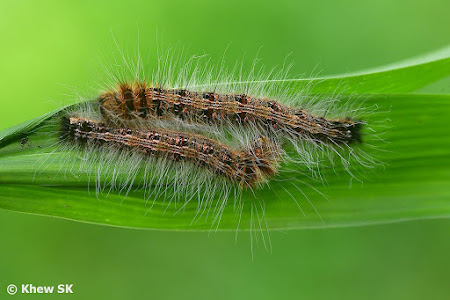 The caterpillar of the Common Duffer may be mistaken for a moth caterpillar at first glance. It is hairy and features cryptic stripes and markings on its body. However, unlike similar-looking moth caterpillars, the hairs on its body are not urticaceous and do not result in rashes or any skin irritation if one were to touch them. The caterpillar feeds on a type of broad-leafed bamboo and the butterfly can sometimes be found in the same localities as the Bamboo Tree Brown. 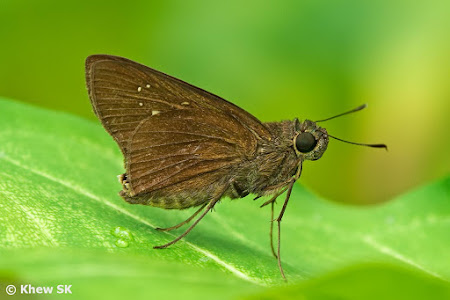 Like the Bamboo Tree Brown, this species' common name instantly suggests its association with bamboos. The Bamboo Paintbrush Swift (and its close cousin, the Paintbrush Swift (Baoris oceia)) are regularly found in the vicinity of bamboo thickets in Singapore. They are skittish, but are often observed to rest on the uppersides of leaves with their wings folded upright in shaded areas in the undergrowth. 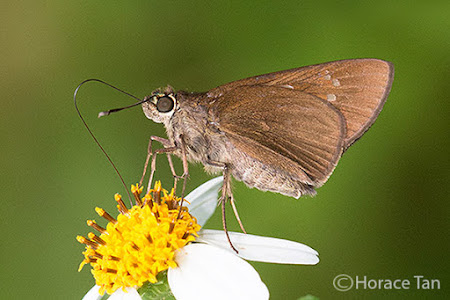 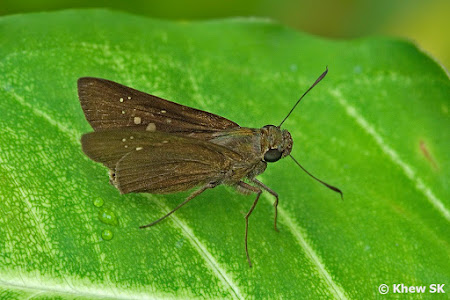 On the upperside, the wings of the Bamboo Paintbrush Swift are dark brown. The forewing has hyaline spots in spaces 2-4, 6-8 and 2 cell spots. The female is usually fully spotted and has an additional non-hyaline spot in space 1b on the forewing. The hindwing does not bear any spot, but the male has a black hair tuft in the cell on top of a scent pouch (hence "Paintbrush" in its common name). On the underside, the wings are pale brown and similarly ``spotted'' as per the upperside. 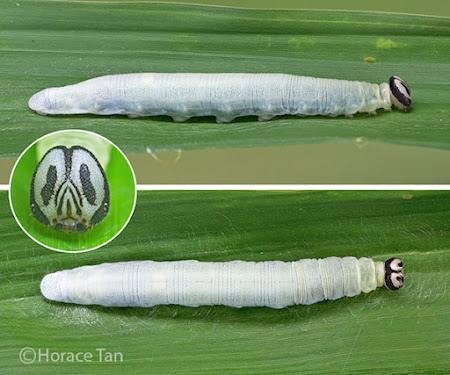 The caterpillar has a green body, usually covered with a whitish waxy powder. It folds the bamboo leaf as a shelter in which to conceal itself. In its later instars, the black head transforms into a unique black-and-white patterned 'face' that helps to distinguish the species from other lookalikes. The caterpillars use several species of bamboos as their host plants, of which two - Bambusa multiplex and Bambusa vulgaris have been identified. 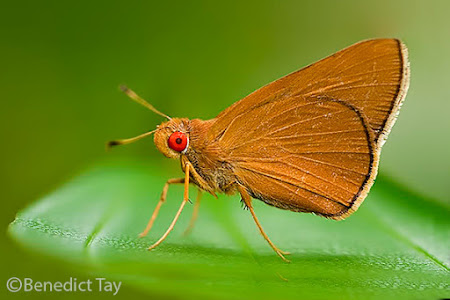 The Common Redeye is widespread in its distribution across Singapore. Although the adult butterfly is not as common as its name suggests, it makes its appearance regularly in parks and gardens, as well as in the fringes of the nature reserves. Again, bamboo, being its caterpillar host plant, indicates that the species is usually not far from where bamboos grow. 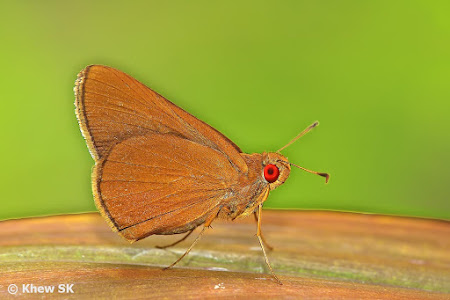 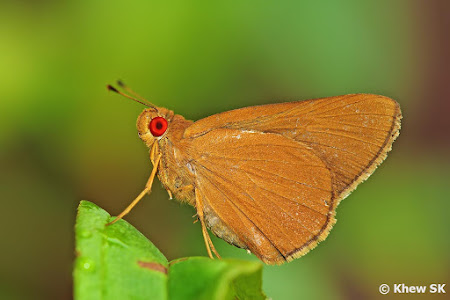 The Common Redeye's wings are a buff-brown above and unmarked. The underside is a more orangey-brown with the hindwing cilia prominently yellowish-white. The eyes of the butterfly are a deep red and stands out prominently. It is a fast-flying species, although more often spotted at rest with its wings folded upright in shaded undergrowth. 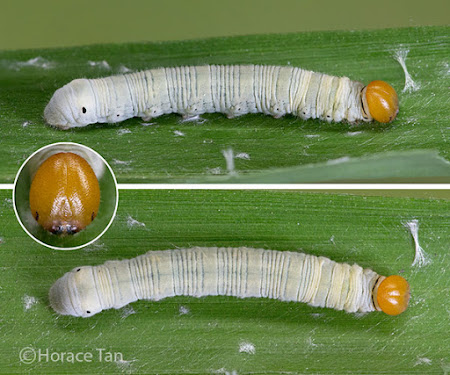 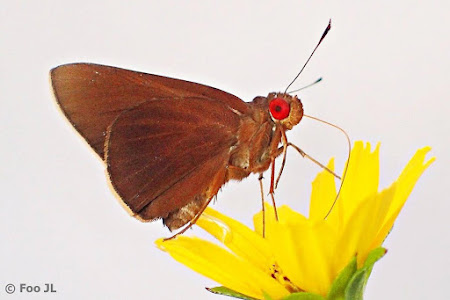 And so, bamboos, an easily cultivated plant used for horticultural use in landscaping, but which also grows wild in various areas in Singapore, belong to group of plants that butterfly caterpillars use as their host plant. These species depends on bamboos for their continued survival in our environment. In the next part of our bamboo-feeding butterfly caterpillars, we will take a look at four other skippers whose life history depends on bamboos.

Posted by Commander at 7:19 PM