Awls of Singapore : Part 2
Featuring the Awl skippers in Singapore 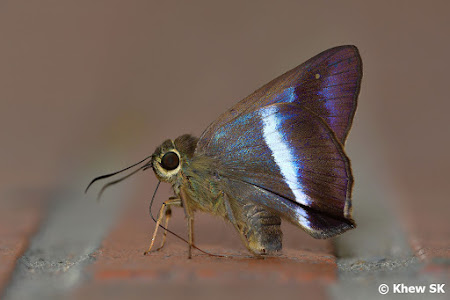 A Plain Banded Awl puddles on a terracotta tile floor


In Part 2 of the Awls of Singapore, we take a look at the remaining four species of skippers bearing the name "Awl" in their English Common names. As mentioned in Part 1 last week, the use of an everyday object (at least in the past) for the name of a butterfly is uncommon. The awl is, after all, a tool with a pointed tip used to make holes in leather or thick fabrics. 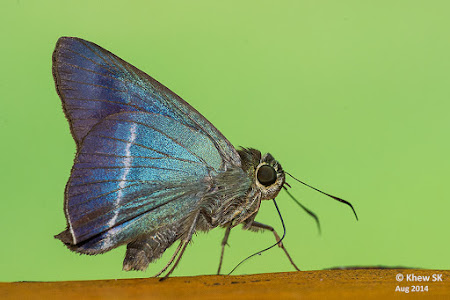 A White Banded Awl puddling at a concrete table


We now feature the four remaining species of the extant Awls found in Singapore - all of which belong to the genus Hasora. These are robust-bodied skippers that prefer the shaded forested areas and are usually more active in the early morning and late dusk hours of the day. They can also be found feeding on flowering plants or puddling on bird droppings and damp forest logs, footpaths and brick walls of buildings within the forested areas. 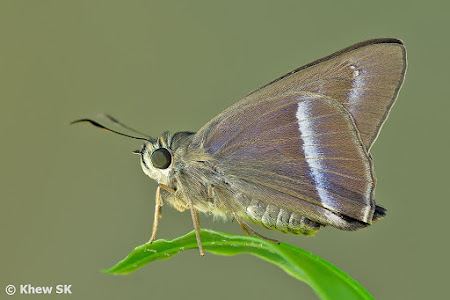 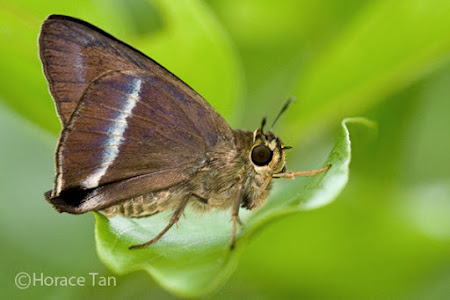 The Common Banded Awl is a relatively rare species but is widely distributed across Singapore, from the nature reserves to urban parks and gardens. It is a rapid flyer and more active in the early hours of the morning, where it zips across heavily shaded habitats, sometimes on tree trunks, feeding on the moisture of the morning dew. It can sometimes be found puddling on bird droppings, or feeding on flowers of trees like the Spicate Eugenia (Eugenia zeylanicum). 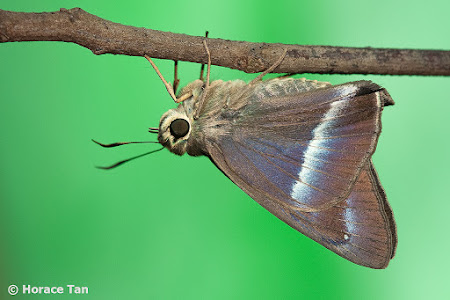 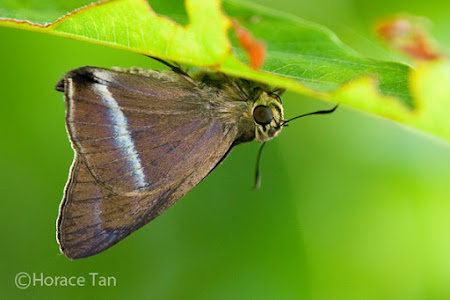 Typical behaviour of the Awls - hiding under a leaf


The upperside of the Common Banded Awl is dark brown in the male and unmarked, whilst the female has two crescentic spots on the forewings. On the underside, the base colour is a dull purple-brown with the white discal band usually narrow and outwardly diffused. The underside of the basal area of both wings is washed with a dull purple-blue sheen under certain lighting conditions. Forewing typically without an apical spot in space 6 of the forewing in the male, but in the female, there may be apical spots in spaces 6 and 7 on the forewing. The hindwing marginal white line extends indistinctly to the apex. The caterpillars have been successfully bred in Singapore on Pongamia pinnata. 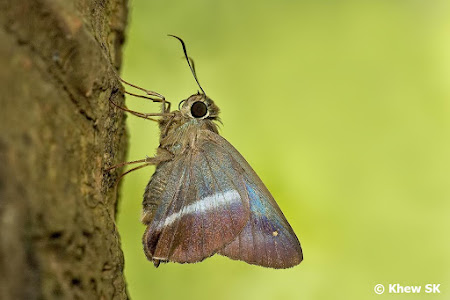 A Plain Banded Awl perched on a coconut tree trunk

The Plain Banded Awl appears very similar to the Common Banded Awl, and identification is often difficult in the field. It shares the same habits as its other cousins in that, when disturbed, it hides under a leaf with its wings folded upright. She species has been spotted at urban parks as well as in shady forested areas. A swift flyer, the Plain Banded Awl also displays crepuscular habits and regularly observed feeding at flowering trees and puddling. 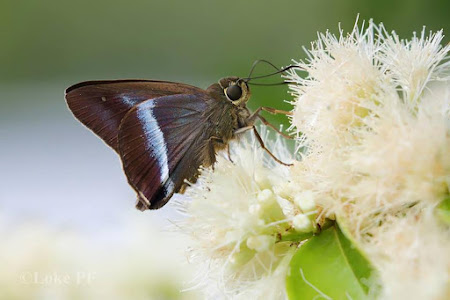 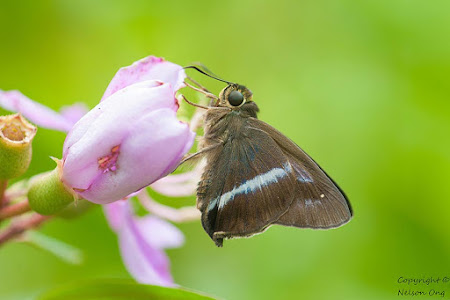 The Plain Banded Awl is dark brown above with a single prominent pale yellow sub-apical spot on the forewing of the male, whilst the female has additional large hyaline spots on the forewing. The underside is pale brown with the inner half of the hindwing having a bluish-grey glaze. The white post-discal band is usually broader than the Common Banded Awl. The hindwing marginal white line starts at the tornal area and generally ends at vein 3. The caterpillars have been successfully bred in Singapore on Spatholobus ferrugineus. 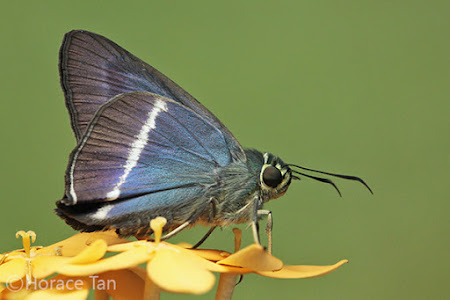 Like its other relatives, the White Banded Awl is mainly found in shady forested areas in the nature reserves. It also displays the habit of hiding under a leaf with its wings folded upright. Once disturbed it takes off at high speed to search for another hiding place. It is also found puddling on damp footpaths and walls of buildings in the vicinity of the nature reserves. 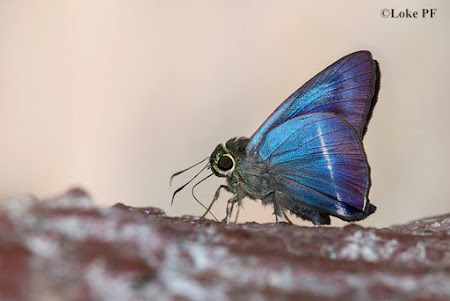 The male White Banded Awl is dark brown above and unmarked, whilst the female has small pale yellow post-discal spots on the forewing. The underside is pale brown with the wing bases strongly suffused with a bluish-green sheen. The white post-discal band is always narrow. The caterpillars of the White Banded Awl have been successfully bred on Derris trifoliata. 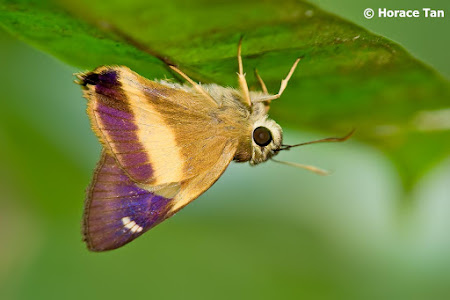 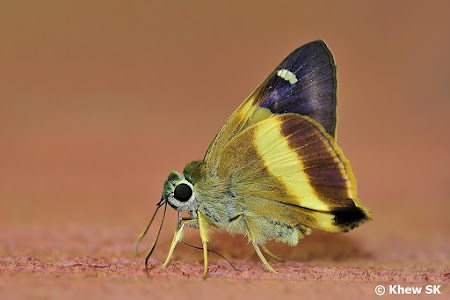 The Yellow Banded Awl is considered rare and usually encountered singly in the forested nature reserves of Singapore. It has the same habit of the other Hasoras of flying rapidly and then settling on the underside of a leaf to hide. It is often observed to puddle on bird droppings and other animal excretions and also fond of damp walls and tree trunks. 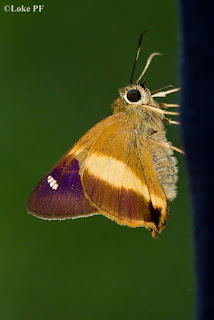 The Yellow Banded Awl is dark brown above with four sub-apical pale yellow spots, together with hyaline spots to form a confluent band. The hindwing has a broad yellow discal band. The underside is similarly marked but with lighter wing bases. In certain side lights, the apical and marginal areas on the underside of the wings may appear deep purple. The caterpillars of this species have been bred on Spatholobus ridleyi and Kunstleria ridleyi.

Posted by Commander at 9:30 PM