Albatrosses of Singapore
Featuring the Albatross Butterflies in Singapore 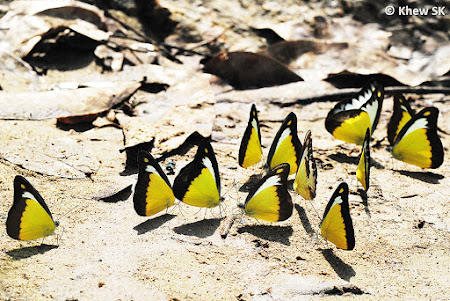 
The Pieridae family (collectively referred to as Whites and Sulphurs), feature a number of butterflies that are basically white and yellow. Many species in the family are also well-known for their migratory tendencies and sometimes in masses. Whilst observations of mass migration of the Pieridae species seem to be quite rare in recent years, they are still often encountered in numbers when puddling at sandy streambanks in Malaysian forests. 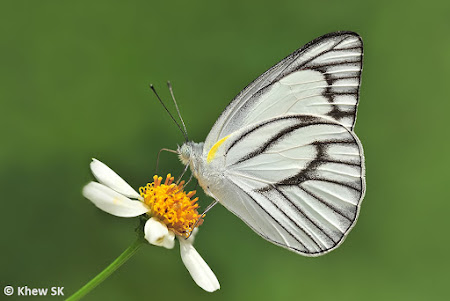 
Amongst the species in the family are several genera of butterflies that are referred to as "Albatross". Perhaps these butterflies' names were coined as a reference to the large white seabirds. Many of these butterflies are indeed predominantly white with rather pointed forewings. Over the years, we have recorded only one extant resident species and one other regular seasonal visitor to Singapore. From the past recent years' observation records, three other occasional visitors have been spotted in various parts of Singapore. However, these are very rare, and probably stray vagrants blown over to Singapore by strong prevailing winds during certain seasons. 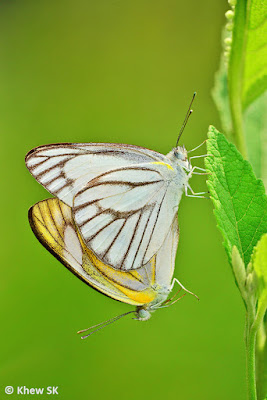 The only extant and resident Albatross species is the Striped Albatross. A commonly found species in urban areas where its caterpillar host plant, Cleome rutidosperma (Purple Cleome) grows wild. Previously classified as a subspecies of Appias libythea, a series of discussions and papers have elevated the Southeast Asian species to Appias olferna. 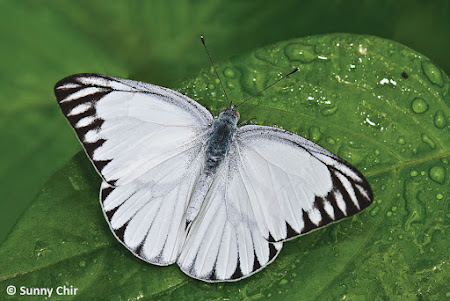 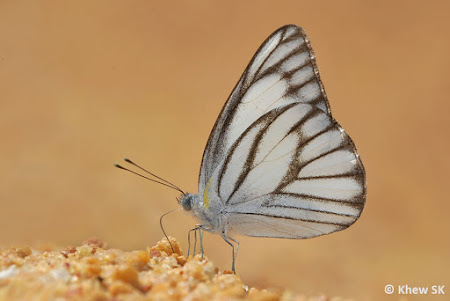 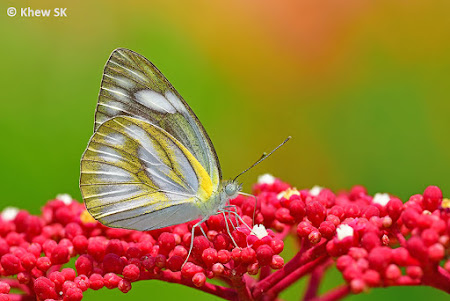 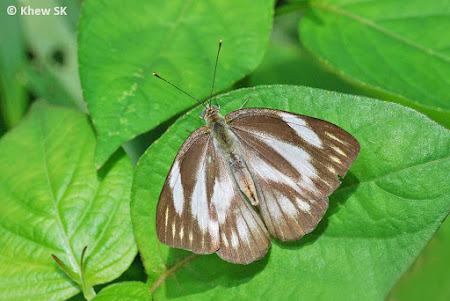 Upperside and underside of male and female Striped Albatross

The male Striped Albatross is white with prominent black veins on the underside. The wing base of the male is tinged with yellow. The female has broad grey markings making the butterfly appear darker and greyer, whilst its hindwings are more generously shaded with yellow. Males can sometimes be seen puddling at damp sandy trails and streambanks, whilst females are usually found feeding at flowers. 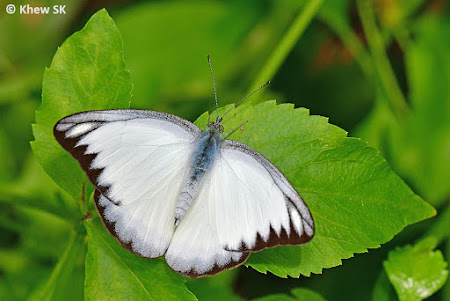 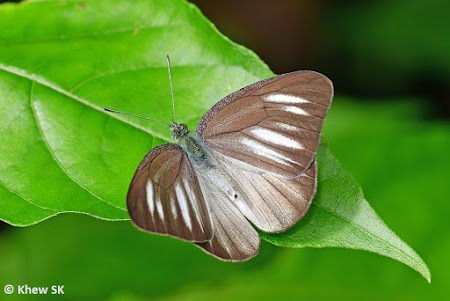 The Chocolate Albatross is a common species in Malaysia (sometimes abundant is more appropriately used to describe its status). However, in Singapore, it is seasonal and only makes its appearance in certain months of the year. Several individuals appear quite suddenly and sightings of both males and females have been reported all around the island. Then, as abruptly as they appeared, the species disappears altogether until the next season. Thus far, they have been observed quite regularly over the years but have never been considered a 'resident' species in Singapore. 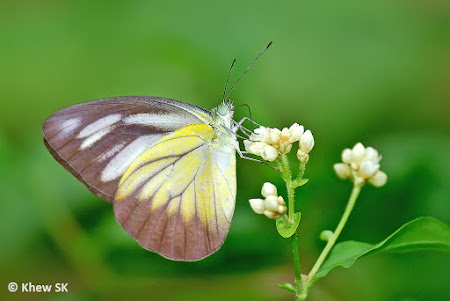 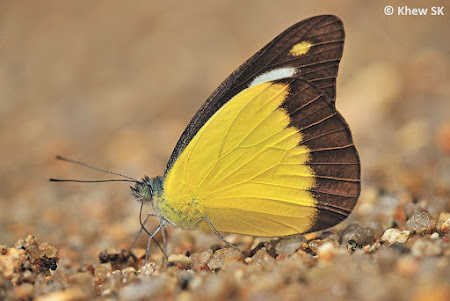 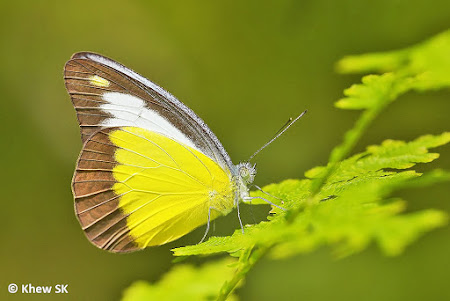 The Chocolate Albatross is a regular but seasonal visitor to Singapore

The male Chocolate Albatross has white uppersides, with a black dentate border. The underside of the hindwing is a bright lemon-yellow with a broad dark brown border. The female appears almost medium grey as the upperside is heavily dark dusted with broad bands across both wings, whilst the underside is grey, with the hindwing generously dusted with yellow. Males of the Chocolate Albatross have often been seen congregating at damp streambanks to puddle, whilst females are more often spotted feeding on flowering plants. 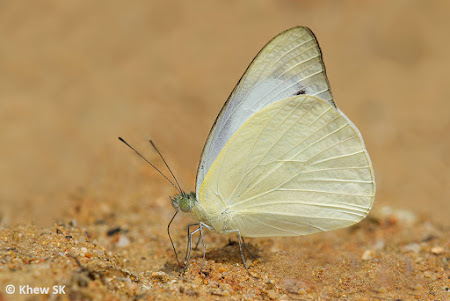 Sightings of the Lesser Albatross are few and only in recent years have yielded confirmed evidence that this species has made an appearance in Singapore. The species is not uncommon in Malaysia, but a few seasonal vagrants have made their way into Singapore and recorded accordingly over the years. 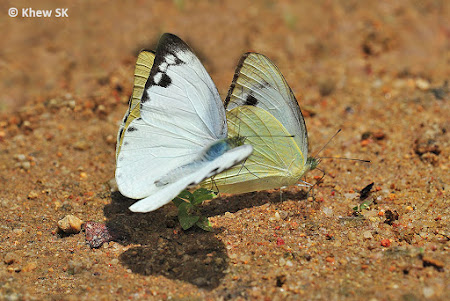 Males have white wings with a distinct black spot in space 3 of the forewing above, attached to the black marginal border. The female has a thick black marginal border on both wings. The underside is cream to pale yellow and there are two forms in the female of this species. The species, like its related cousins in the genus, are often found puddling at damp streambanks in forested areas. 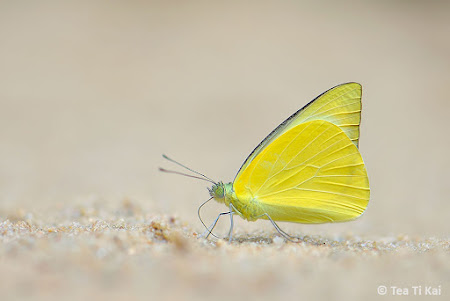 A male Malaysian Albatross with its distinctive yellow undersides

This species is recorded in Singapore from a single confirmed rare sighting of a female in the nature reserves. Again another re-discovery, it appears that many species of theses "Albatrosses" were indeed extant in Singapore in the mid-1950's onwards, but somehow disappeared as Singapore developed. 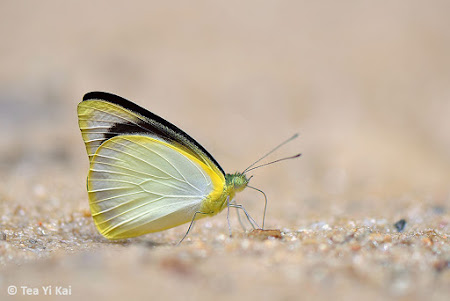 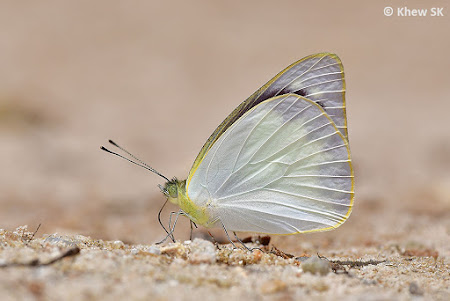 The Malaysian Albatross is variable in its colour, ranging from creamy white to lemon yellow. The upperside of the male is white with a narrow black border along the costal edge and running along the termen. The female has broad greyish borders on both wings and the colour of the hindwing may vary from white to a creamy yellow. Both sexes have been spotted puddling at damp sandy streambanks. 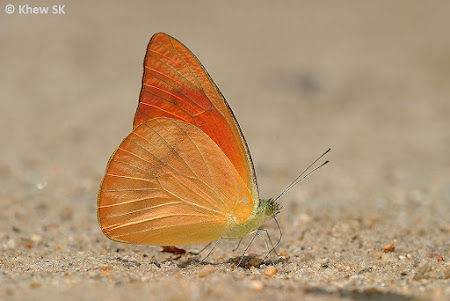 A most recent re-discovery in 2018, the wings of a dead female Orange Albatross were collected and identified. Whilst there was an unconfirmed sighting of this species on Sentosa Island some time in the mid-1990's no other reliable sightings have been recorded. Documented as an extant species by the early authors, it was apparently regularly sighting in the early 1970's in parts of Singapore but has not been seen since until the 1990's. Not considered a common species, even in Malaysia (usually single specimens turn up at puddling grounds together with other more common species like the Chocolate Albatross), it is probably a rare seasonal vagrant that may appear in Singapore from time to time. 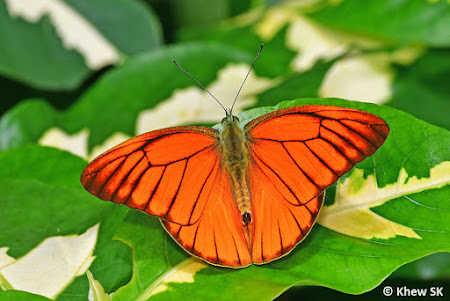 The Orange Albatross is the most colourful and attractive of the Albatrosses. In the male, the butterfly is dark orange above with prominent black veins on both wings, whilst the underside is a light yellowish orange. Females are more heavily dark dusted with broad wing borders and usually a deeper orange than the male. 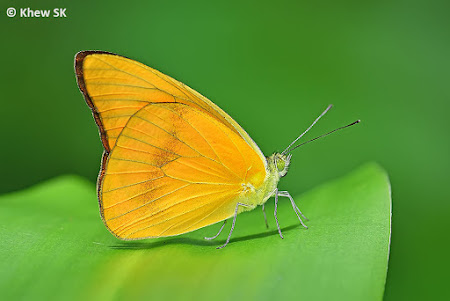 An Orange Albatross perches on a leaf to rest after feeding

And here we have the five Albatrosses that have been recorded in Singapore, and we should continue to keep our eyes peeled for these species that seasonally make their way to Singapore from time to time. The only local resident species, the Striped Albatross, is considered common should continue to sustain itself in the years to come.

Posted by Commander at 4:47 PM