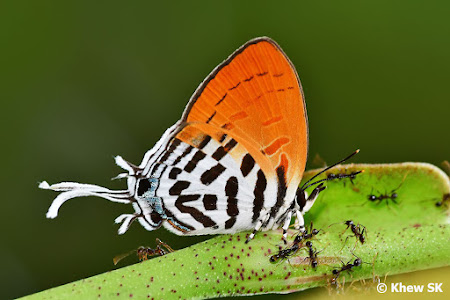 
The month of May is almost over as we look back at a rather interesting period of global and political precedents in a world that is more fraught with uncertainties these days. After a flurry of nuclear tests and a show of aggression and disregard for any possibility of hostilities with the US, North Korea's President Kim suddenly did a turnaround and agreed to an inter-Korean summit with his southern counterpart. 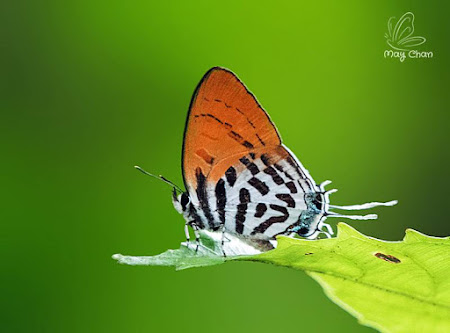 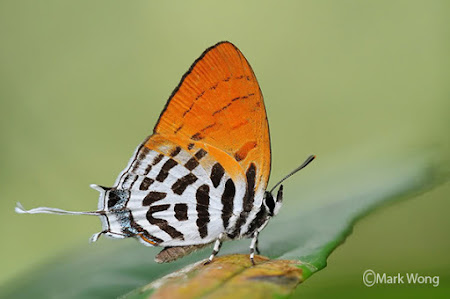 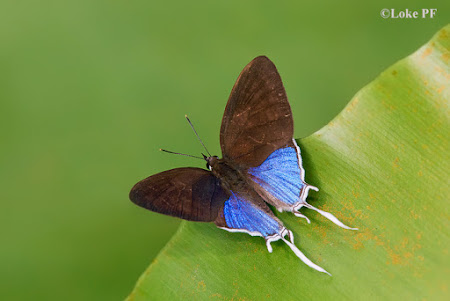 What followed was an announcement that the North Korean leader would meet the US President for a dialogue on denuclearisation. This meeting would take place on 12 Jun in Singapore. However, subsequent events continue to put into doubt whether the meeting would take place. The US then cancelled the meeting. In a surprising turn, another unannounced inter-Korean meeting was held on 26 May - the strongest sign yet that the two Korean leaders are trying to keep the on-again off-again summit on track. 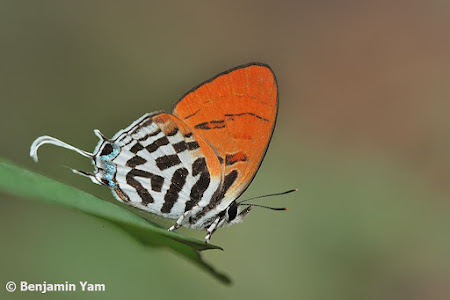 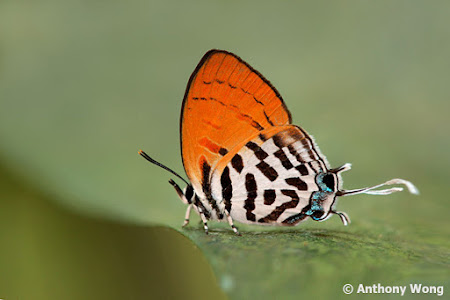 President Trump said in a Twitter post late on Friday: "We are having very productive talks about reinstating the Summit which, if it does happen, will likely remain in Singapore on the same date, June 12th, and, if necessary, will be extended beyond that date." And once again, Singapore may be put on the world map again, with this historic meeting in the making. It is probably quite chaotic for those who are involved in preparing for this US-North Korean summit, with the current diplomatic flip-flops, and we wonder if the meeting will really happen on our little island in the sun or not! 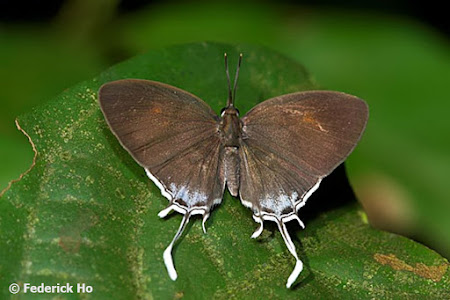 The other bit of news that caught a lot of people by surprise, was the results of the Malaysian General Elections. Having grown up in Malaysia, I would never have imagined that the "balanced scales" logo of the Barisan Nasional, the ruling political party in Malaysia, would no longer be associated with the Malaysian government. Helmed by the 92-year old former Prime Minister Dr Mahathir, the opposition coalition, Pakatan Harapan swept into power on 9 May 2018. 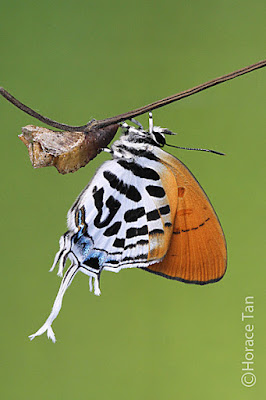 This marked a historic defeat for the ruling Barisan Nasional coalition, which had been the governing party of Malaysia and its predecessor state, Malaya, since the country's independence in 1957. The groundswell and unhappiness at the alleged unbridled corruption was underestimated by the ruling party and caught Prime Minister Najib Razak by surprise. More drama followed after investigations into the allegations of corruption and ill-gotten wealth were reopened. It has yet to be played out to a conclusion, and Malaysians from all walks of life will have to wait to see what will happen in the coming weeks or months.

A mating pair of Common Posy

Moving back to our more peaceful world of butterflies, we feature a pretty and colourful Lycaenid as our Butterfly of the Month for May 2018. The Common Posy (Drupadia ravindra moorei), a tailed Lycaenid, is a relatively common species that is mainly associated with Singapore's forested nature reserves. It is rarely seen in urban parks and gardens. The species prefers the forested environment in Singapore. 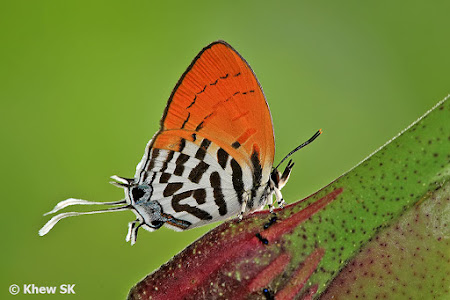 A Common Posy on the young shoot of the Bandicoot Berry

Where it occurs, the Common Posy can sometimes be common, where several individuals may be seen together, fluttering in the shady forest habitats. The species loves the young shoots of the forest shrub, Bandicoot Berry (Leea indica) where it feeds on the sugary sap of these young shoots. 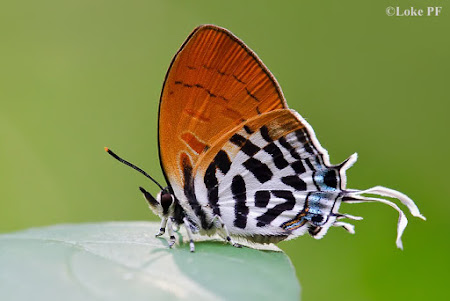 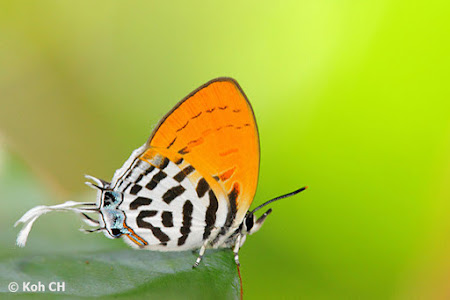 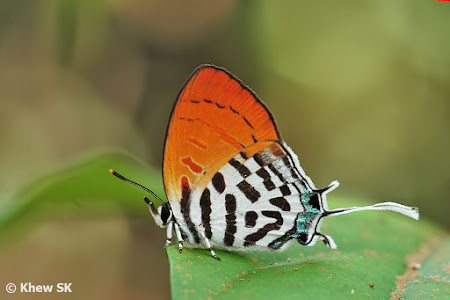 The Common Posy has a weak hopping flight, usually stopping on the tops of leaves with its wings folded upright to rest. However, at certain times of the days in hot sunny weather, both the males and females of this species have been regularly observed to open their wings opened flat to sunbathe. 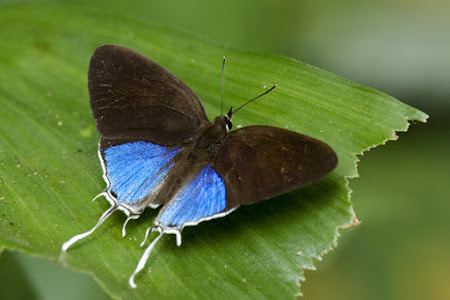 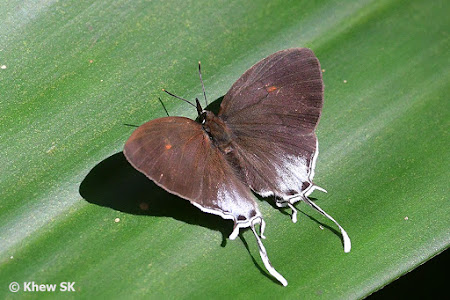 Upperside of the male (top) and female (bottom) Common Posy

The male Common Posy has a dark brown forewing on the upperside, and a bright blue hindwing. The female is a paler brown with traces of an orange discal patch on the forewing. The tornal area of the hindwing is bluish-grey with several black spots. 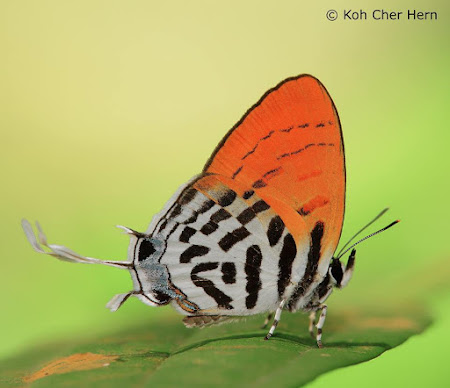 The underside of both sexes is a rich orange on the forewing with some dark bars. The white hindwing is marked with solid black bands and spots. The hindwing has three white tails at veins 1b, 2 and 3, of which the tail at vein 2 is the longest of the three. The tornal area of the hindwing features two black spots and a patch of iridescent blue scales. 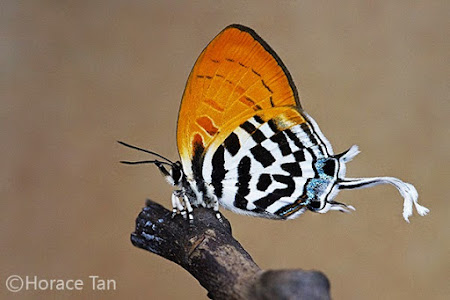 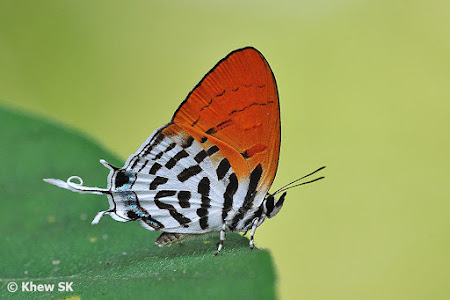 Posted by Commander at 8:36 AM