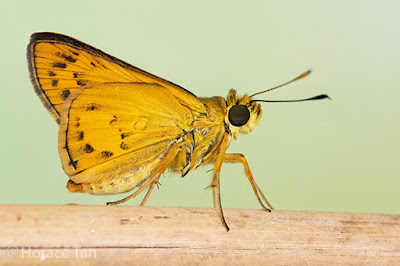 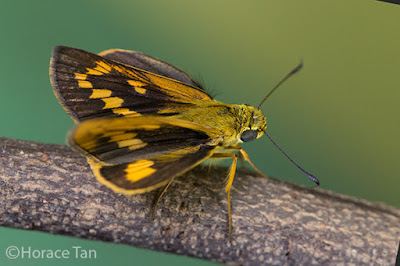 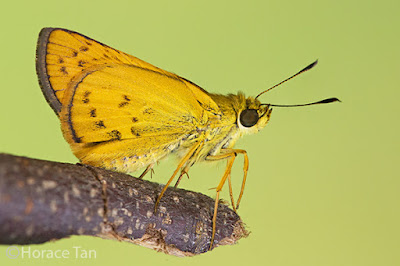 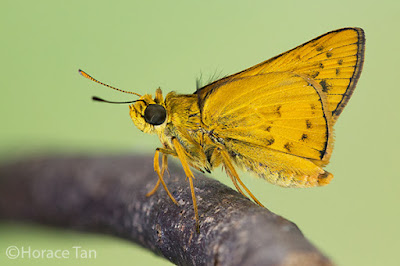 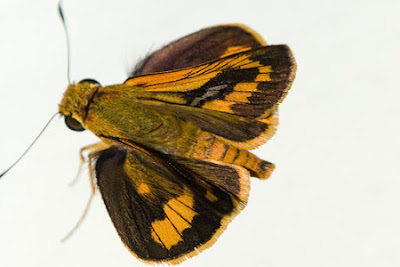 A recent addition to the Singapore Checklist, the Linna Palm Dart is moderately rare in Singapore. The adults are strong flyers and are typically sighted along the forest edge and grassy undergrowth. The swift flying adults have been observed to visit flowers and sunbath with open wings in sunny weather. 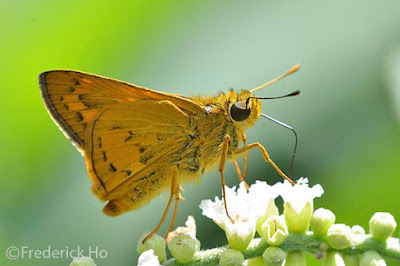 A Linna Palm Dart visiting flowers for its sugary intake. 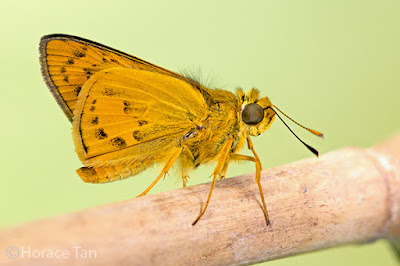 In Singapore, Linna Palm Dart has thus far been bred on one bamboo species, Bambusa multiplex. The caterpillars feed on leaves of the host plant in all instars and live in leaf shelters. As the caterpillar grows in size through progressing instars, it migrates to ever larger shelters constructed by joining cut leaf fragments or the opposite edges of a single blade. 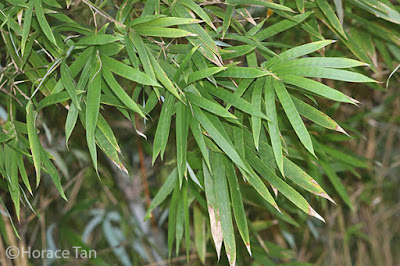 
The eggs are laid singly on a leaf blade of the host plant, typically on the underside. Each dome-shaped egg is creamy white and appears to be smooth to the naked eyes. A closer inspection reveals numerous short, discontinuous and irregular tiny ridges running in a longitudinal direction. Each egg has a basal diameter of about 1.1mm. 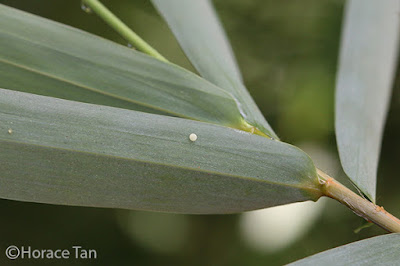 An egg of the Linna Palm Dart laid on the underside of a leaf blade of Bambusa multiplex. 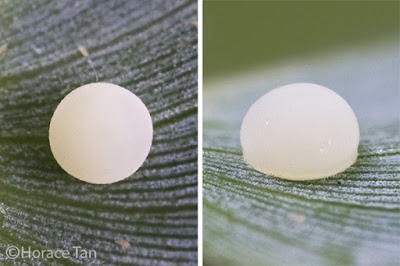 Two views of an egg of the Linna Palm Dart, diameter: 1.1mm.


It takes about 4-5 days for the egg to hatch. The young caterpillar eats just enough of the shell to emerge, and then immediately proceeds to finish the remaining egg shell. The newly hatched has a length of about 2.5-2.75mm. Its pale whitish body is cylindrical in shape with a small number of very short and tiny dorso-lateral setae. There is a tuff of relatively long setae on the posterior segment. It has a black head and a black collar on the prothorax. 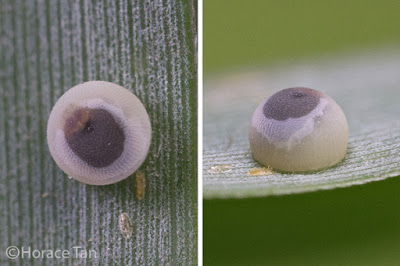 Two views of a mature egg of the Linna Palm Dart. 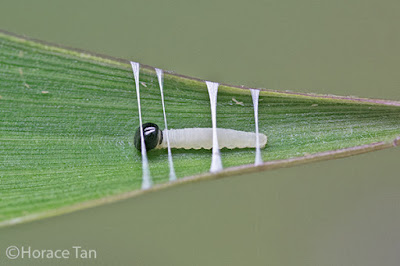 A newly hatched caterpillar of the Linna Palm Dart in its first leaf shelter.


After consuming the egg shell, the newly hatched caterpillar constructs its first leaf shelter,  typically at the tip of a leaf blade. The body takes on a green undertone after a few feeding sessions on the leaf. The 1st instar takes about 3-4 days to complete with body length reaching 5.5mm. 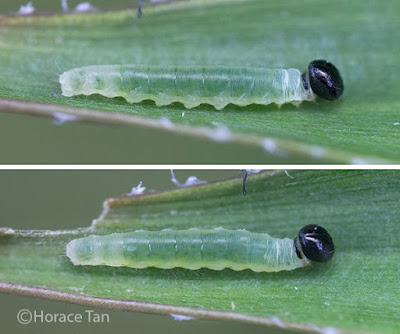 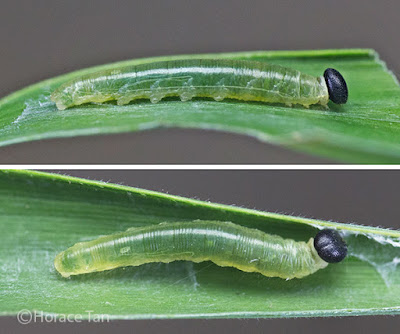 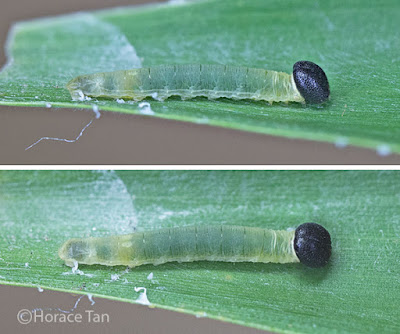 Two views of a 3rd instar caterpillar with a black head, length: 7mm. 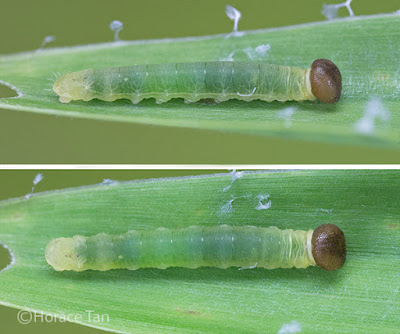 Two views of a 3rd instar caterpillar a with brown head, length: 8.5mm.


The 4th instar caterpillar resembles the 3rd instar caterpillar closely. In specimens with a brown head capsule, the base coloration is now lighter brown and there is a dark brown band right in the middle. This instar lasts 5-6 days with the body length reaching about 17-18mm. 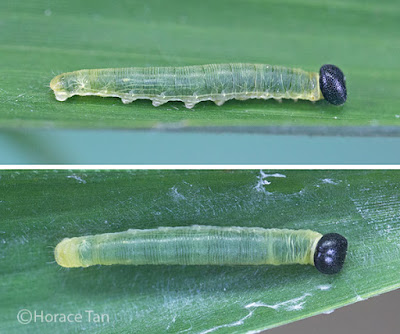 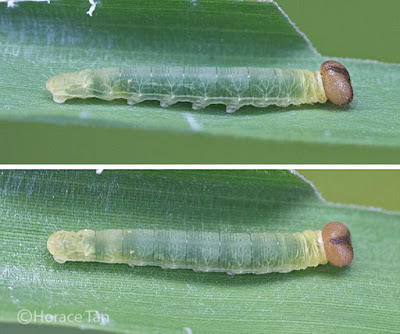 
The 5th instar does not bring about any noteworthy change in the body or head markings. This instar lasts 7-8 days with the body length reaching about 24-25mm. 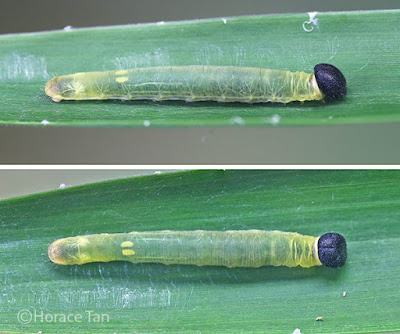 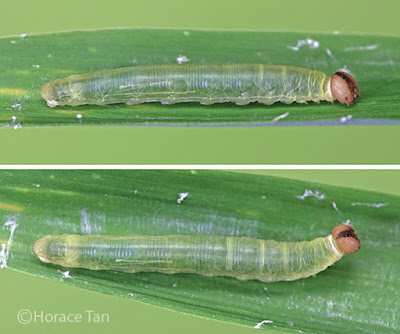 
In the 6th (final) instar, specimens with brown head now has its base coloration in pale yellowish brown and a dark brown band lining the epicranial suture. For those specimens with black head, small pale brown patches might appear laterally. The body is now predominantly yellow with a a green undertone. 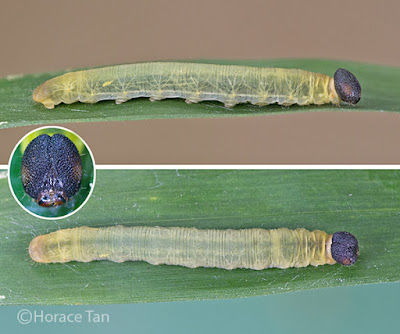 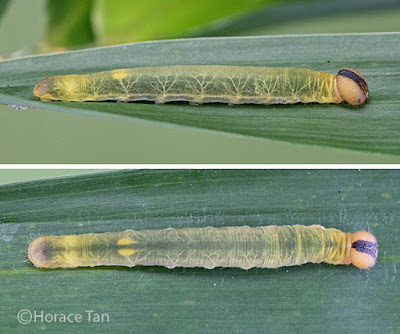 
The 6th instar takes about 10-11 days to complete with the body length reaching up to 33-34mm, In the last day of this instar, the body gradually shorten and changes colour to pale beige brown (initially with a purplish tone). The caterpillar ceases feeding and whitish powdery substance begin to appear on its body. Next it proceeds to seal the shelter it is in with silk threads. Soon the caterpillar becomes dormant in this pupation shelter. This prepupatory phase lasts for about 1-1.5 day. 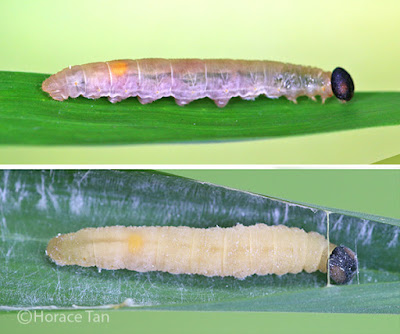 A pupation shelter opened to reveal  a pre-pupa of The Linna Palm Dart.


Pupation takes place within the leaf shelter. The pupa does not have a cremastral attachment nor a silk girdle and it is mainly secured with tightly woven silk threads in the shelter. It has a short thorax and a rather long abdomen. The body is generally orangy brown, darker in the thorax and wing pad areas. Length of pupae: 19.5-20.5mm. 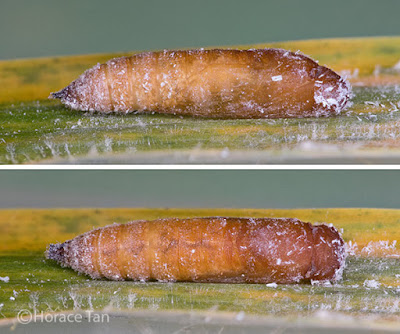 Two views of a pupa of the Linna Palm Dart.


After 8-9 days, the pupa becomes dark brown with the thorax and wing pads mostly black. The orange markings present on the forewing upperside are now visible through the now translucent pupal skin. Eclosion takes place the next day. 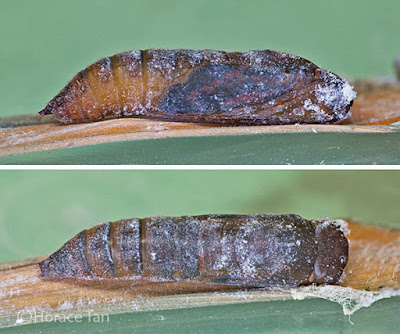 Two views of a mature pupa of the Linna Palm Dart. 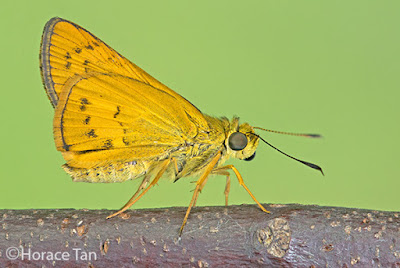